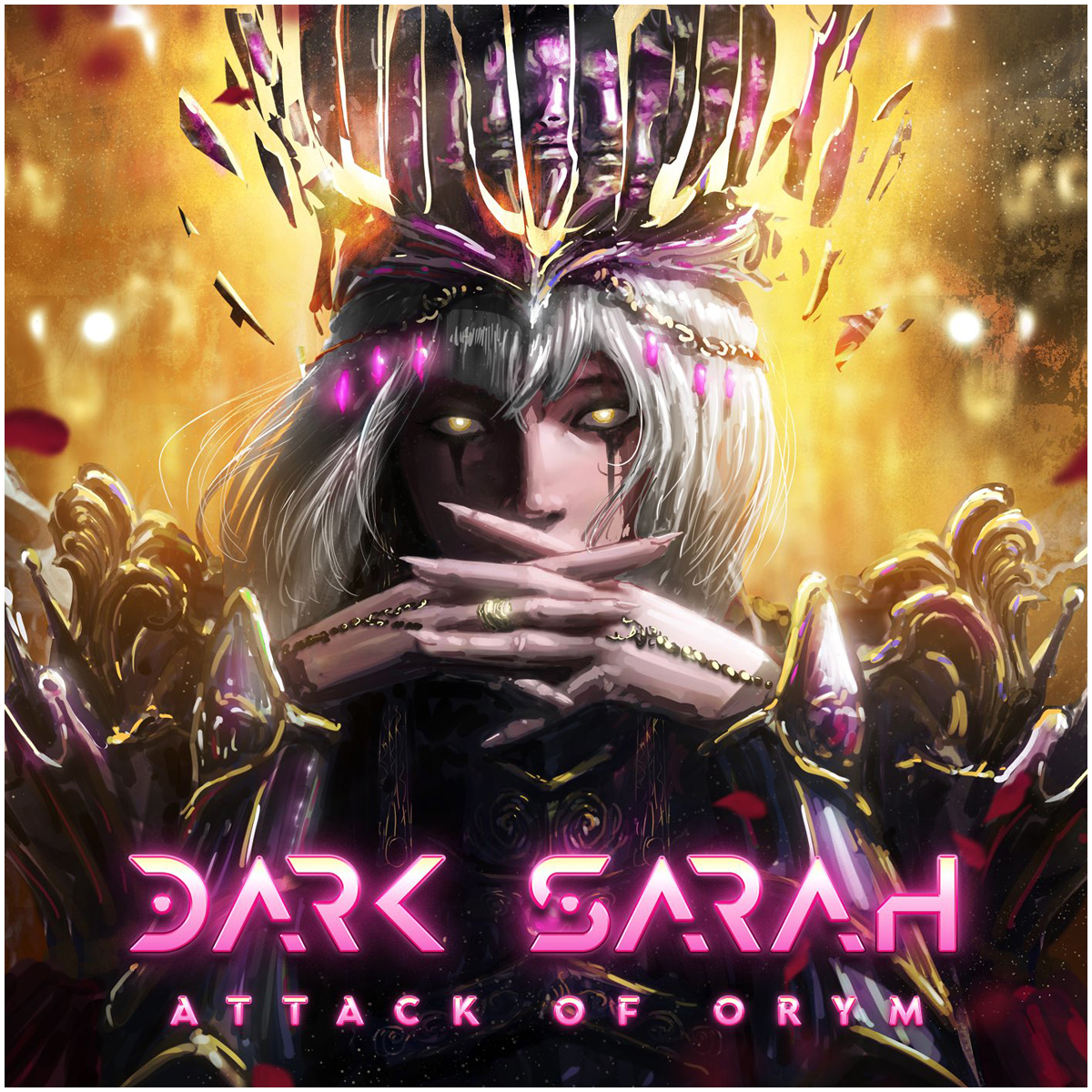 Labels can be deceiving, especially self-imposed ones. The Finnish cinematic metal band DARK SARAH calls its oeuvre ‘retro horror fantasy’ and their latest album “Attack Of Orym”, their fifth, continues the tale of its predecessor “Grim”.

The Orym of the title is ‘the king of the forest folk’, the villain of the story, sung by Mark Jansen of Epica. The members of Dark Sarah are singer Heidi Parviainen, guitarist Sami-Petri Salonen, keyboardist Henrik Airaksinen, bassist Rude Rothstén and drummer Thomas Tunkkari.

Its plot is described thusly in the bio: “After Mörk was killed, Malevolent – the evil orb – needed a new host. It cast a spell over Luna (voiced by Heidi) with the ancient sleeping thorns, Svefnthorns, and Luna fell into a sleep like state. For years, Darkness dwelled upon Grim. When the word of the passing of the monster reached Orym, the king of the forest folk, he started his attack. Orym and his troops started to roam into the city – destroying everything on their way”.

Sounds like dark stuff indeed. But the innate sweetness of Heidi’s voice and the rather pop-metal sensibility of the music belies all this insistence upon darkness and ‘retro horror’. And the story itself isn’t that terribly horrific, to be honest.

A brief orchestral intro heralds the self-explanatory first track, “Attack Of Orym” (featuring Jensen). Heidi as Luna warns of the coming threat (“Hear the marching rumble in the hills”) and the stomping groove of the track is exactly that – ominous and vaguely evil. The catchy chorus, though, is sweetly defiant, Luna urging the Grims to “Stay down, fight for your freedom” By the bridge, things don’t look good (“We’re prisoners, we’ve fallen under”) and Orym snarls his purpose to “Retaliate, annihilate”. 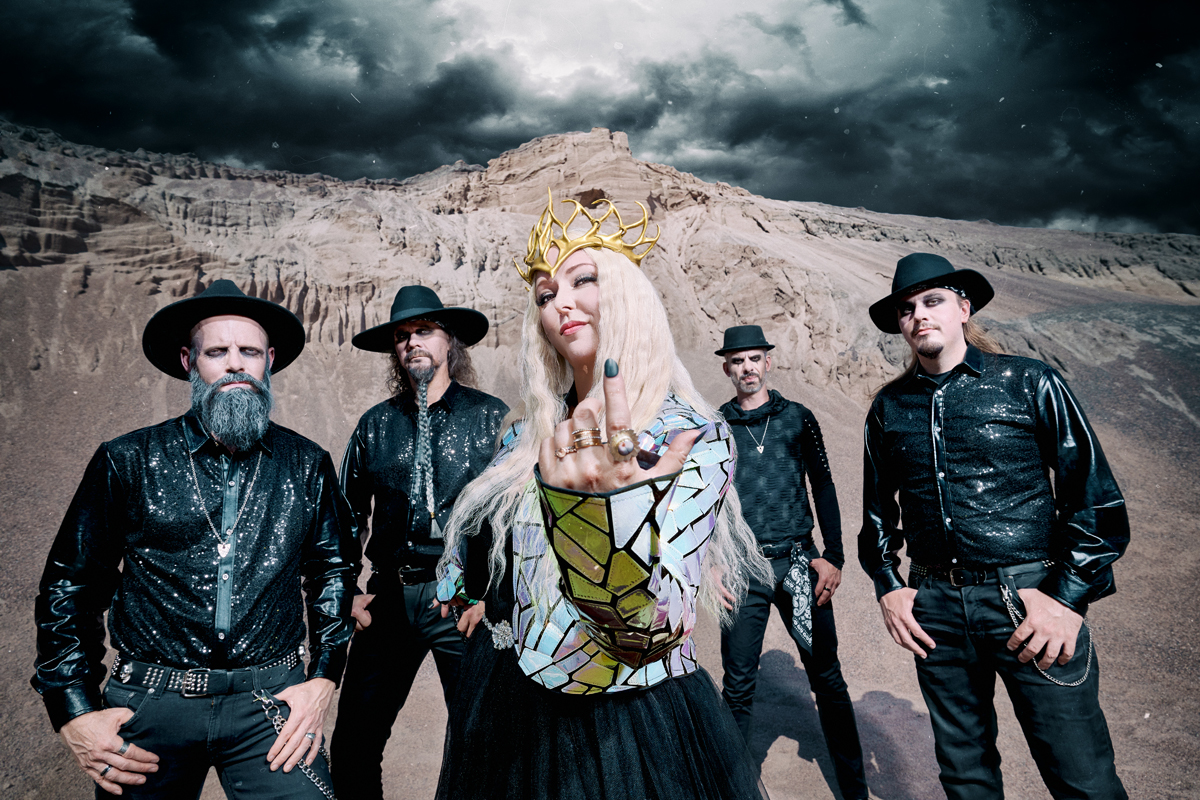 “Invincible” (featuring a guitar solo by Kasperi Heikkinen of Beast In Black) is a scene in which́ Malevolent “tries to convince Luna to stay on the dark path”. Interestingly, though, it has a light, bright, almost dance-pop feel – the supremely self-confident Malevolent is so convinced of his superiority that he feels no need to bluster or threaten. He brags “I’m invincible”, promising Luna “All the things you wish are yours,” noting “The weak, they shall be lost forever”.

“B.U.R.N.”, subsequently, is “the dark manifestation of Luna” who “knows that the devil can only be beaten with his own weapon, fire”. It’s a standout track – the sweeping, terse tempo at the start, midway and end builds terrific tension. Luna knows she has to sacrifice herself (“Set me on fire / Burn me to cinder”, Heidi sings in the solidly memorable chorus), “clinging to what is left of me” and knowing there’s “no being again like we used to be”. And she knows the fire is a necessary cleansing – “I’m diseased, set me free / Destroy the evil chains that bind me”, that the “fire and burning” is part of her “destiny that’s meant to be”.

“Warning Sign” is described as Luna choosing “a powerful weapon of bewitched flowers to fight against Orym” – “a missile gun from a camellia”, as the song goes. The eerie keyboard melody and hectic groove give this battle-scene track a decidedly gothic bent as Luna and “the foul chameleon” that is Orym duke it out – the verses desperate, the chorus a call to arms (“Hear the voice… close your eyes and struggle to stay alive”).

The oddly-titled “Goth Disco” sees our villagers dancing before their doom, having one last hurrah before it’s all over, and the creepy keyboards and slashing guitars establish that sense of foreboding. The first verse sets the scene (“It’s almost full moon when all the creatures arrive”), the second describes the pending conflict (“All nearby villagers / Creatures join to take arms”). The chorus really gets across that sense of letting go, that “ecstasy before termination”, when the “streets are filled with the creatures dancing”. The bridge continues that idea, urging the villagers to “Take the chances / Think of every deed / Frantic and romantic… feel your powerful roots”. Jansen as Orym seems to be watching all this and his sinister spoken section repeats what Luna says in the second verse as if to mock her – that’s effective. It’s a clever concept, but the title kind of stops you short: would these characters even know such a term?

“Delirium”,which also features a Heikkinen solo after the bridge, appears to be Luna trying to get her troops, as it were, to focus on the mission at hand (“I’m facing changes, fighting strangers / To beat their foolish minds”) because Orym is “As lethal as enticing/ So venomous and devious”, a “ruler who’s humming your favorite tunes”. Sounds pretty serious, right? But it’s set to a shimmering ABBA-esque, almost 1950s sounding melody (when you hear it, you’ll know what I mean) – it’s so antithetical to the action of the lyrics as to be off-putting. Definitely different. 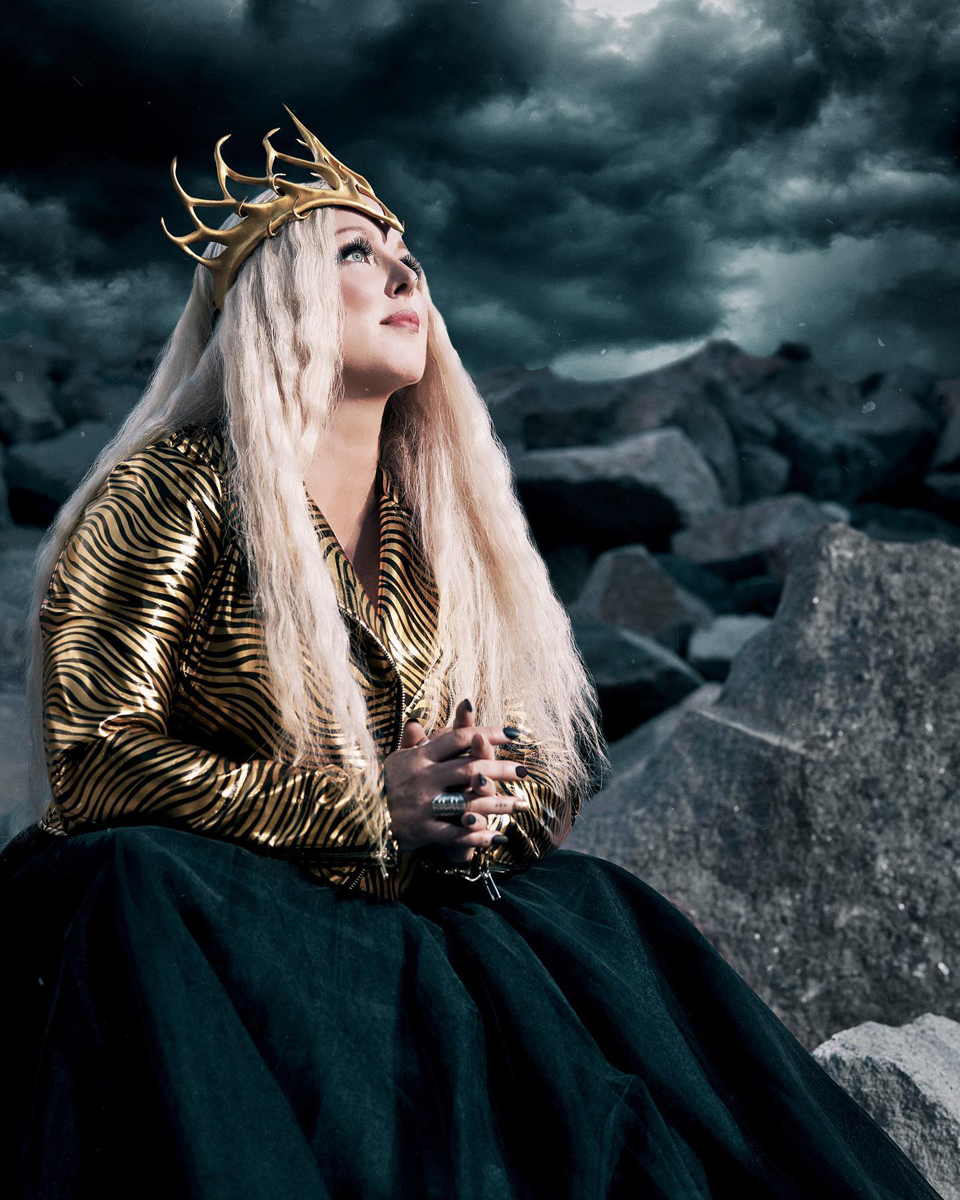 “Piece Of My Heart” has Heidi as Luna duetting with frequent guest JP Leppäluoto, returning in the Dragon role. A sparkling keyboard melody accompanies this bit of reminiscing about their relationship and subsequent parting – she sings “In my hollow chest / Lies a dragon’s nest” and notes “We share a piece of heart” even though “one needs the shadows and one seeks the light”. It’s a bit unclear why this is necessary plot-wise, though, since he doesn’t appear to be involved in the story thus far. But perhaps he serves as her anchor in some way – she hints in the bridge that she “ended up descending into this darkness”.

“Breaking Free” then, is the logical next step. This is Luna reflecting on how she ended up in that darkness after having “the weight of the universe on my soul”, that is, all this pressure to be the hero – “This is how villains are made”, she muses, turning that label onto herself. The chorus is, well, her breaking free of those feelings, “taking my liberation”, she says. In the bridge, though, she realizes that ultimately the struggle was worth it: “I turned into a monster / To be stronger”.

The logical next and final step in this idea, then, is the final track, “Hero And A Villain”, with its Amaranthe-like synthesizers and sinewy groove. The first verse might be Orym speaking ; the second is Luna voicing her own fall: “One day, you’re playing your part right / Then one day, it’s nothing but a fight”. In the chorus, she admits to being both, hero and villain, and says in the bridge “I am a maniac / I’ve been waiting for this for years / The villain wearing black / Makes the hero kneel”. It’s an unclear resolution – so what happened to the Grim citizens? Were they obliterated because she abandoned them, as she hints –  “I’m not coming back / I’m the one to blame”? Is Orym now in charge?

The songs on “Attack Of Orym” are noteworthy in their economy. All the songs are variations on pretty much the same tempo ; all have a modulated chorus at the end like clockwork. You should be at least somewhat aware of the story ahead of time, since the songs can be fairly vague. But it is that saying they’re one thing – ‘retro horror’ – and sounding like quite another – ‘sweetness and light’ – that is the DARK SARAH conundrum.