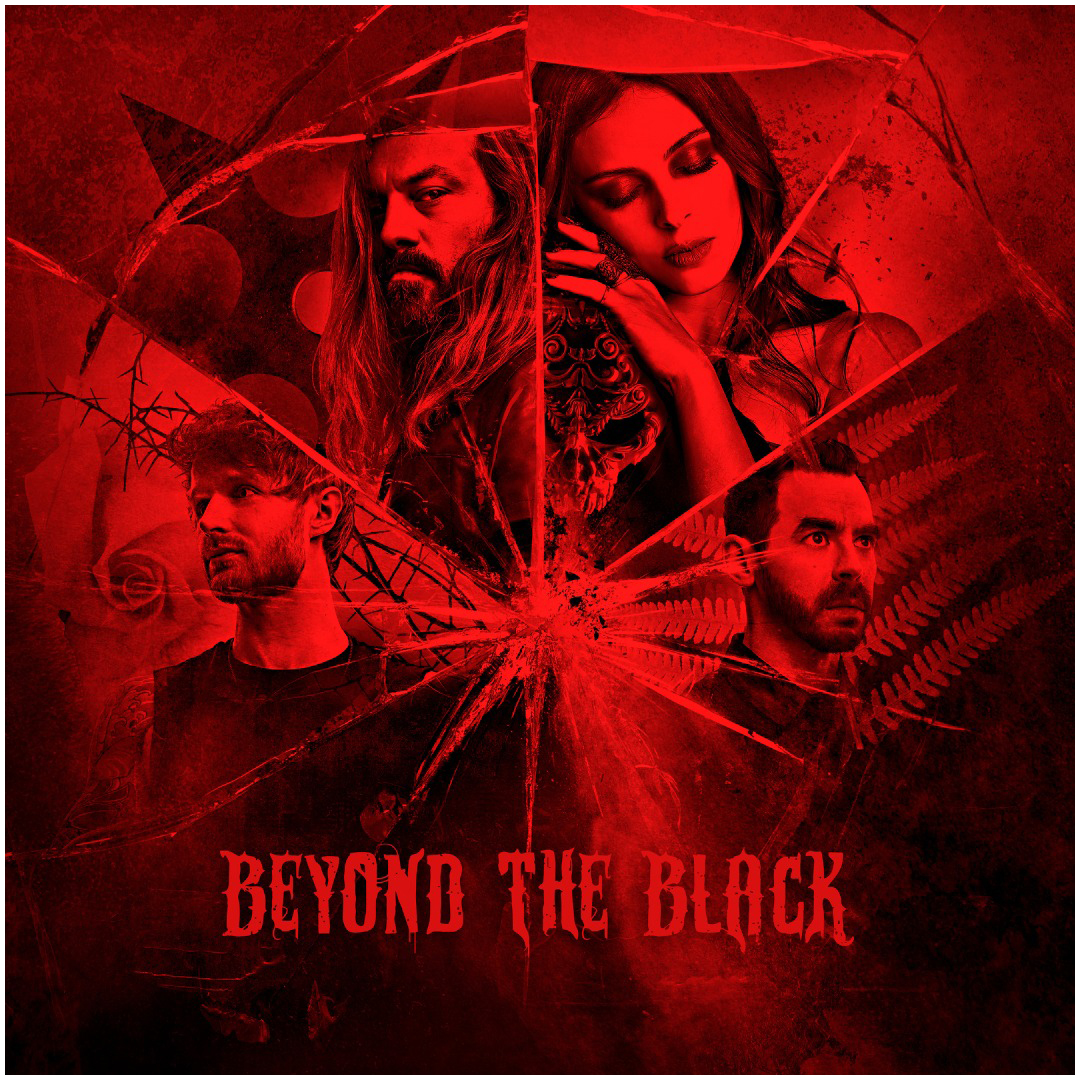 BEYOND THE BLACK is a symphonic metal band from Germany. The band formed in 2014 and released their first album “Songs Of Love And Death” the following year. This self-titled album will be their fifth full length release. Their current members are Jennifer Haben (vocals), Chris Hermsdörfer (guitar and growling vocals), Tobi Lodes (guitar and some backing vocals) and Kai Tschierschky (drums). This line-up has been solid since they all joined in 2016.  In early 2021 the band announced that Stefan Herkenhoff, who had been the bass player since 2016, would be stepping down and the band would continue from now on as a four piece with the bassist slot becoming a flexible position for live shows.

In 2021 the band signed a deal with Nuclear Blast Records. Jennifer has stated that she is very happy with the label and that it sort of ties in with the theme of the band right now which is all about new beginnings. She adds that the reason the album is self-titled is because she feels like they’ve really found themselves with this album. That this is truly who BEYOND THE BLACK is! The album has 10 tracks with the running time of 40:08.

The record comes in hot right off the bat with “Is There Anybody Out There”. It’s an up-tempo hard driving song with a huge memorable chorus and right away you get the sense that BEYOND THE BLACK has indeed found themselves! This track is beautifully reminiscent of the sound that caused me to fall in love with the band when I first heard them back in 2016! It has a similar feel of songs like “In The Shadows” and “Lost In Forever” but with a more powerful production and a fresh exciting sense of purpose! The lyrics were partly inspired by the pandemic and the feelings of isolation and loneliness that came as a result of the lockdowns. Jennifer‘s vocals are absolutely fantastic and the band is firing on all cylinders! One of my favorite tracks for sure!

“Reincarnation” is up next and with it the album continues to dazzle and amaze! Lyrically this song sort of sums up the main theme of the album… of Jennifer, and really the whole band at this point of their career. That main theme, she says, is finding yourself and making a new start… almost like being reborn. Other topics intertwine with that theme throughout the album, such as hope and facing your demons, but I get the feeling it goes even deeper than that. To me it seems to tackle the subject of life and death. Not necessarily saying that when we die that we literally come back as something or someone else, but instead saying that it’s “like a Reincarnation” putting the emphasis on the belief that our souls will never die. Musically the song is an epic multi-dimensional anthem with another huge chorus, big guitars, bass and drums, and some cool nuances like the flute and even bagpipes. 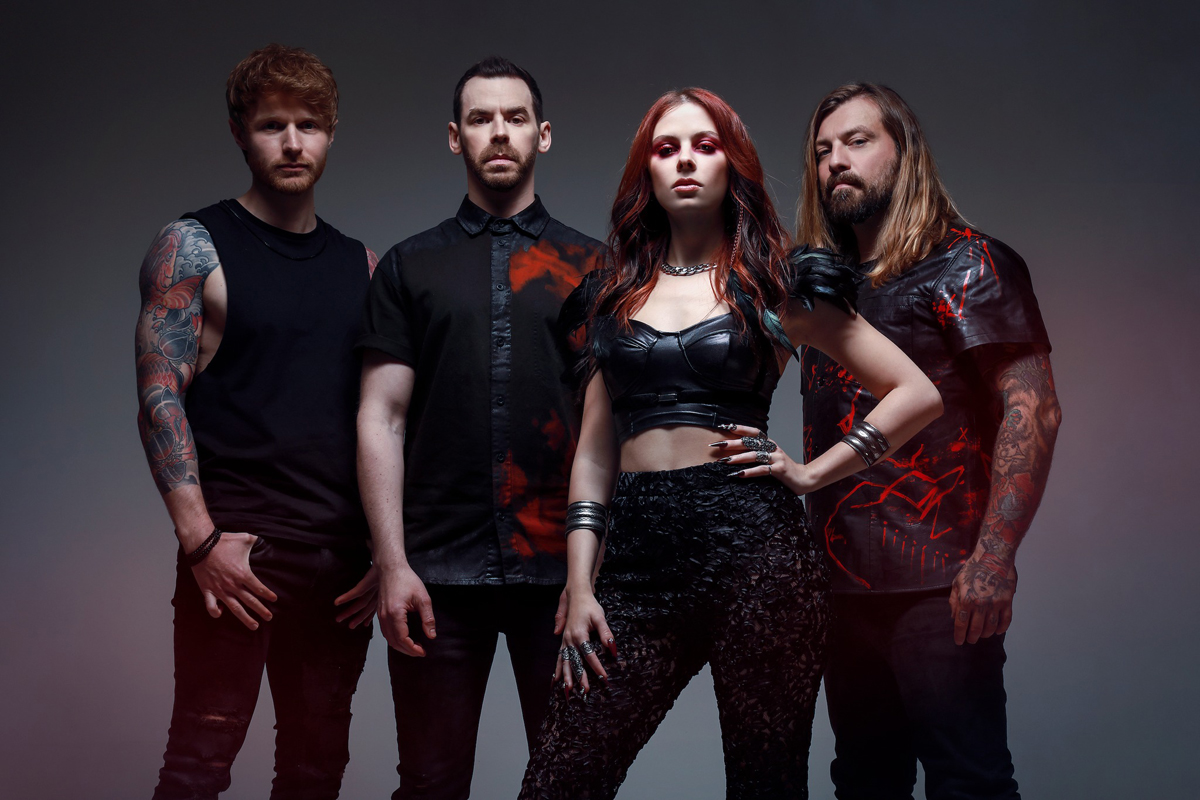 “Free Me” starts off a bit slower with some beautiful acoustic guitars, but then gradually builds up to a huge chorus with big guitars and some cool soloing from Chris! It also has a little more focus on the symphonic elements. Jennifer says this song is sort of about how you sometimes have to go through some really bad stuff to free yourself. No idea what bad stuff she’s referring to, but the lyrics seem to indicate that it could have something to do with a relationship… “You have walked into the silence / Where my heartbeat used to be / May the love your eyes still show me / Be the last thing that I see – that I see”. After the chorus there’s a sort of post-chorus where Chris throws in some one-word growls to accent Jennifer‘s vocals. It’s a great song with a great message and Jennifer sings her heart out!

This brings us to “Winter Is Coming”. The video for this song is really fantastic! Jennifer admits this song was inspired by the series Game Of Thrones and so the video is very theatrical and full of a similar type of imagery. If you’re a Game Of Thrones fan (as I am) you’ll remember that “Winter Is Coming” was the title of Season 1-Episode 1 which wasn’t actually about winter at all, but instead was more like a metaphor that something bad was about to happen. Musically it’s a bombastic up-tempo rocker with a big catchy chorus that you’ll be singing in your head long after the tune is finished! Another great song with an early BEYOND THE BLACK vibe, cool melodies, a quick guitar solo and of course Jennifer‘s amazing vocals! This is the longest song on the album coming in at 4:38.

“Wide Awake” switches gears and starts off with some really elegant acoustic guitar and then is joined by Jennifer singing softly and passionately… “Some kind of curse, lies on this place, where she is bound to live her lonely days / A hundred years, may come and pass, before the roses wither down at last”. It’s beautiful… it’s magical even! Jennifer‘s beautiful voice sounds incredible! Soon the bass, drums and guitar come in and the song suddenly becomes an amazing power ballad! Jennifer continues the tale with a slightly elevated sense of urgency… “Into the dark, of sprawling plants, she rips the vines apart with her bare hands / Her fingers bleed, she cannot see, she only feels her longing to be free” …and I’m brought to tears. There’s only two other singers who have ever had that effect on me. The first was Sharon den Adel from Within Temptation and the second is Rossella Moscatello from the amazing Italian band False Memories. This song is pure magic! Soaring and passionate vocals from Jennifer! An amazing chorus! Chris lays down an emotional screaming guitar solo! This song begs for an epic video! More like a mini-movie! I’m truly floored!

“Dancing In The Dark”, track 7, leads in with the brief sound of a didjeridu. This creates a sort of cool eerie vibe. Suddenly begins a big heavy tribal drum beat. If you’ve seen the amazing video (below) or saw them on their last tour then you know that live, Jennifer plays a big gong drum with padded mallets along to the song while singing at the same time! A very cool and original idea! So not only does she sing, but she also plays guitar, piano, flute, cello, probably a whole host of other instruments as well, and now drums too! Is there anything she can’t do?! The tribal beat continues throughout much of the song and eventually gives way to proper full-kit drums with huge guitars and bass and a killer guitar solo as well! It’s a big tribal anthem type song with, you guessed it, a huge sing-along chorus!

Up next is “Raise Your Head”. I kinda feel like these last three songs are a little on the experimental side. But definitely in a good way! Jennifer‘s vocals seem to be the focal point and she kills it! This song has taken several more listens than the previous tracks to really sink in, but now I get it and I love it! It’s somewhat dramatic and fairly slow paced, almost plodding. The lyrics seem to encourage believing in yourself and staying true to who you are no matter what everyone else says. Here’s a sample… “Raise your head, Call your name into a sky of dying stars / Raise your head, The eternity above will change your heart / Don’t be scared, Take a step no matter where it’s gonna lead”. I gotta give them credit for trying different things instead of every song sticking to the same formula although that formula does work very well for them! The song also has a really nice guitar solo towards the end.

“Not In Our Name” starts out with an acoustic guitar that sounds to me almost like a picking style you might hear on a banjo. Which fits right in with the vocals that follow having a sort of deep south Louisiana Cajun music vibe (sorry, that’s the best way I can explain it). The drums come in and then the bass and big guitars join. Then things get pretty heavy with growling vocals taking the lead on much of this song, but yet that same bluegrassy type guitar pattern continues throughout. Jennifer‘s vocals sort of trade off with the growling vocals and even double with them sometimes. It really makes for an interesting and different type of song but it works. It’s difficult to explain and it took several listens for me to really appreciate it, but now I really like it. This is the shortest song on the album at 3:40. 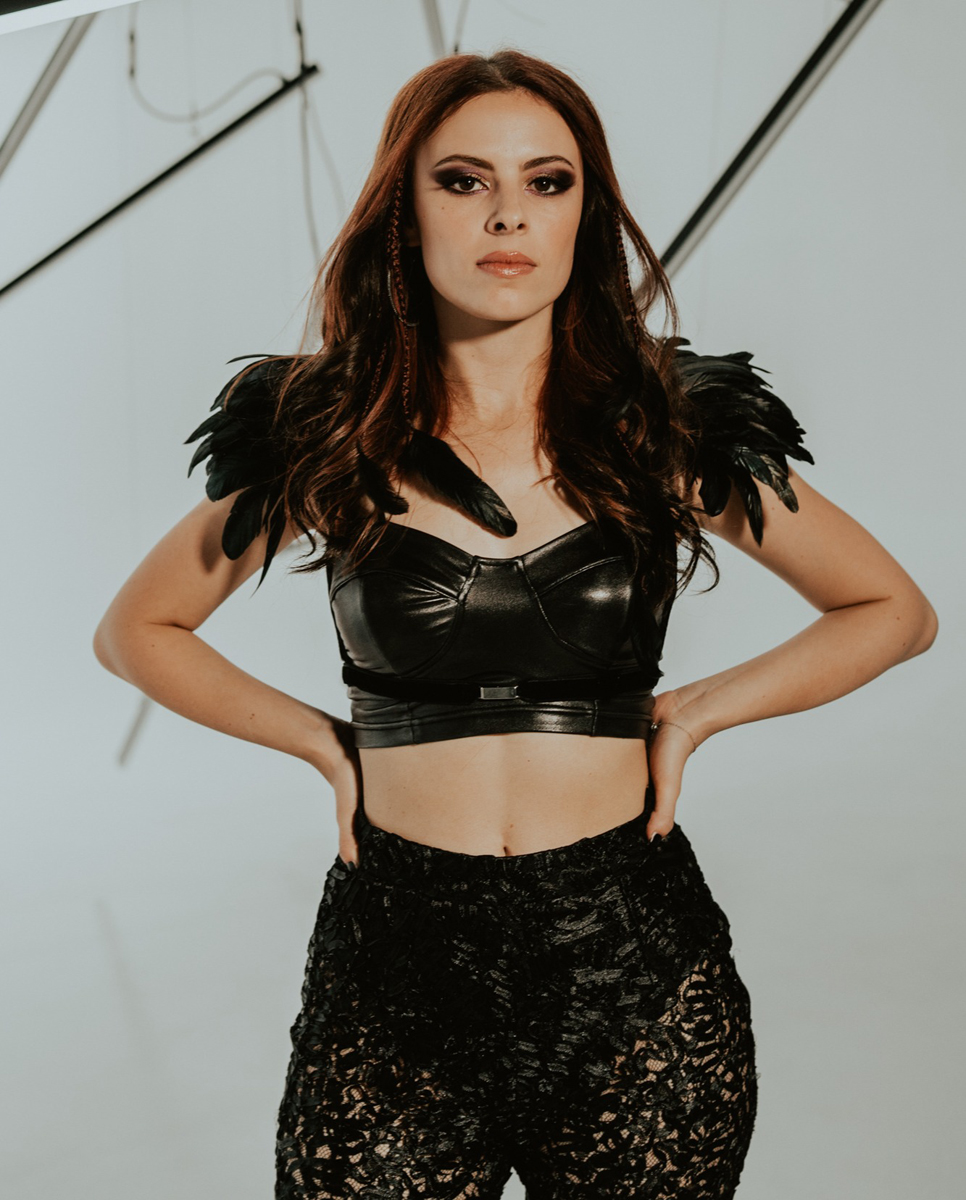 The album closes with the dramatic and haunting “I Remember Dying”. Jennifer said this song was originally titled “Do You Remember?” which is what’s repeated during the chorus. Opening with an eerie keyboard, Jennifer slowly sings, pausing to take a breath between each line… “I remember dying here / These walls once held my heart in fear / I shed my life with every tear / And I remember dying here”. A slow tribal sounding drum pattern comes in as she sings the second verse continuing in the lesiurely pace as the first. Then the full band comes in with the same tempo throughout the entire song. It’s really less like a song and more like a score to a movie. In fact, Jennifer said she thinks this track might fit very well as the background music to a scene in a movie. I definitely agree!

In Summary:
With their last album “Horizons” BEYOND THE BLACK experimented with various different sounds including some electronic and pop elements. I enjoyed the album and there were some great songs on it, but many fans (myself included) started to get a little concerned the band was losing it’s direction a bit. With this fifth self-titled album the band is definitely Back in Black! This album sounds amazing! The production is powerful and punchy and the songs are incredible! Jennifer has always had an amazing voice but with this album she seems to have a certain maturity and control that really solidifies her place right up there at the top with the best of them, and the band sounds amazing! Jennifer says the album cover, with each member’s photo also having a symbol, represents the four main themes of the album… love, loss, humility and battle (battle in the sense of fighting for yourself and for others), which are also the main themes of the lyrics of the songs. She also says those symbols and themes are present in the videos and throughout the album and CD booklet, and if you really look you can find a lot! The themes are dark but there’s an underlying message of hope throughout each song on the album! Jennifer says after all, the band is called BEYOND THE BLACK and “Beyond The Black… is light”.