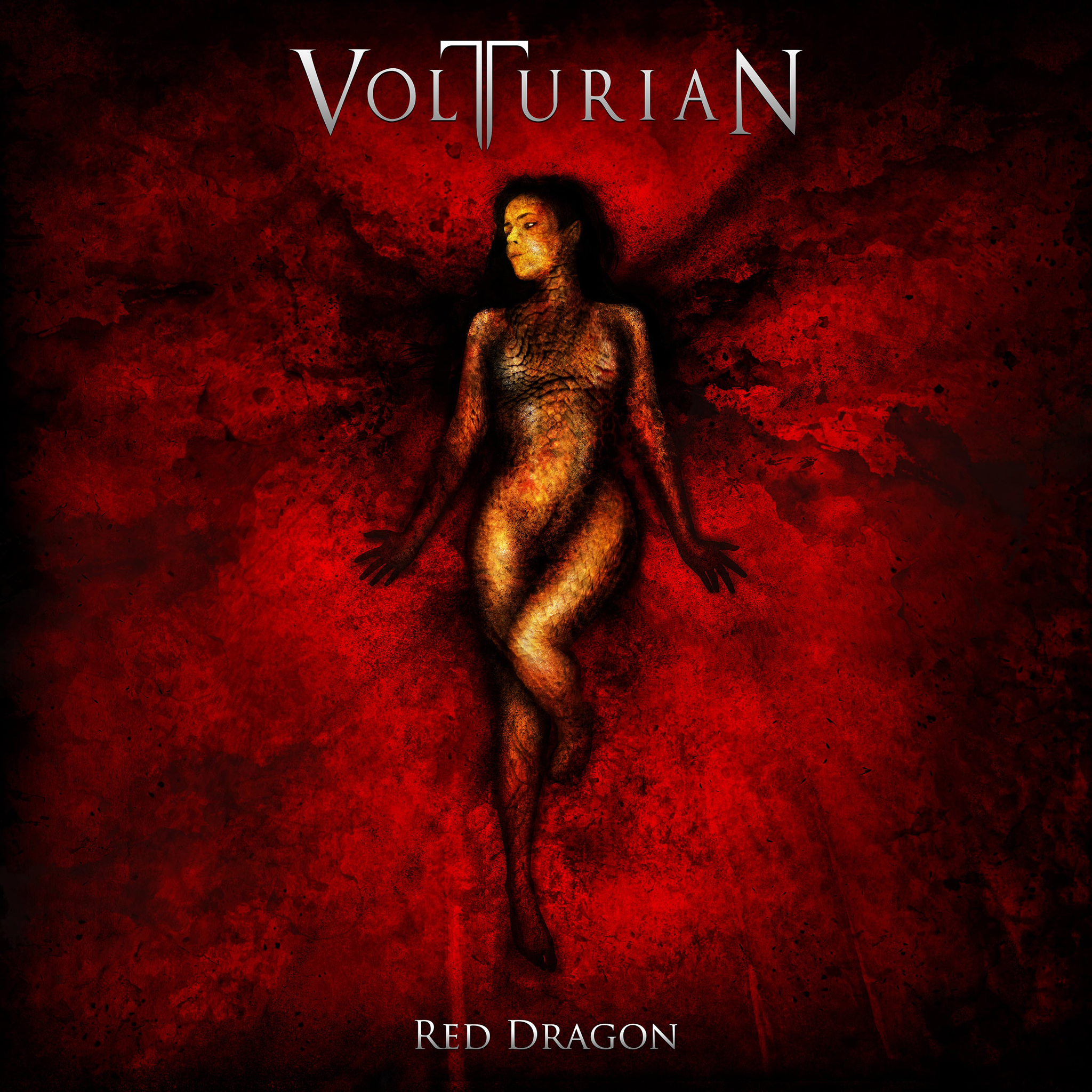 VOLTURIAN is one of many fantastic Italian bands making waves lately! It seems there is something really special and exciting happening in the Italian music scene! It’s actually been building up for a while now but has recently picked up momentum thanks to labels like Frontiers, Scarlet and ROAR!  and shows no signs of slowing down anytime soon! VOLTURIAN has been described by their label Scarlet Records as “a modern metal project founded by singer Federica Lanna (ex-Sleeping Romance) and songwriter Federico Mondelli (Frozen Crown/ Be The Wolf/Nocturna). Drawing heavy inspiration from 90’s and early 2000 metal as well as 80’s pop music combining melody and heaviness with strong electronic elements“. Federico not only plays the guitar, but also the keyboards and writes all the music and lyrics just like he did on the “Crimson“ album. VOLTURIAN‘s line-up is completed by bass player Massimiliano Rossi and drummer Andrea Zannin.

VOLTURIAN‘s debut album entitled “Crimson“ was released April 24th 2020 on Scarlet Records and featured a duet with Frozen Crown’s Giada ‘Jade’ Etro and a cover of the 1991 Roxette song “Fading Like A Flower“. Federico has said the formula they had in mind for the album was sort of a “Swedish death metal goes electronic but with pop oriented female vocals and some huge nineties influence”. In early November 2021 they released a surprise video for the song “Fading Like A Flower“ and at the same time announced that they were closing the chapter on “Crimson“ and entering the studio to begin the recordings for their next album. On March 2nd, 2022 they posted to their Facebook page that they have finished the recordings and also officially announced their new drummer Andrea Zannin. On March 30th, 2022 the first video for “Red Dragon“ was premiered for the song “Harley“.

Federico is apparently not fond of down time. He’s been a very busy man lately balancing his time between VOLTURIAN and three other bands. His main band, the amazing Frozen Crown, his first band Be The Wolf, where he also sings lead vocals, and his newest creation the fantastic symphonic gothic metal band Nocturna. With all that going on he still finds time to create fantastic artwork for all four bands and others, designing t-shirts and album covers. He even designed the album cover for “The Last Night Of Fall“ , the debut release from my favorite band, the incredible False Memories!

On his Facebook page, Federico posted this in reference to the album’s art work and music… “After Be The Wolf‘s debut album “Imago“, here’s another reference to my beloved Thomas Harris. Of course, aside from than the Hannibal world, the DC Comics villains served once again as inspiration (after “The Killing Joke“), as the whole album atmosphere is pretty much Gotham-esque. Of course, produced by the best: Andrea Fusini. Lots of electronics, quite some experimentation, still with Federica Lanna signature vocals, Massimiliano Rossi thundering bass and the beautiful drum lines of Andrea Zannin (who really added A LOT to the songs).“ 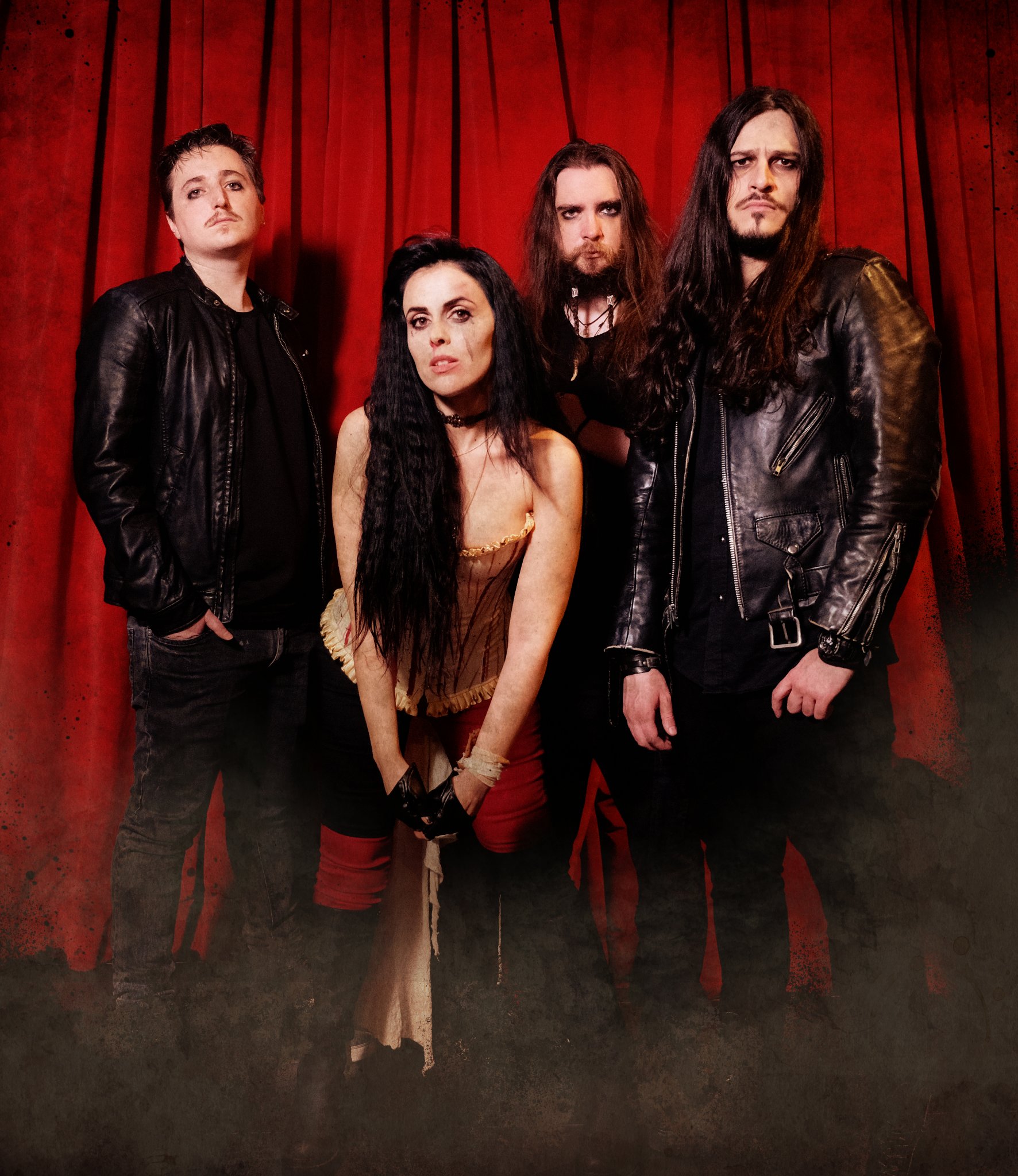 I enjoy very much the music of VOLTURIAN‘s debut release “Crimson“ and with “Red Dragon“ we are served up another helping of a very similar dish to devour with slightly more emphasis on the electronic/techno/dance flavor than it’s predecessor and with the absence of any male vocals. So without further adieu lets have a seat at the table and prepare for a feast! I think I might enjoy the challenge!

“Red Dragon“ opens up with a track titled “Rebirth“. It’s a short 2 minute futuristic sounding instrumental intro with an almost tribal pulsating bass drum and an assortment of industrial and techno sounds and melodies over some cool airy synthesizers. It’s an interesting way to start the album and sets the tone nicely for what’s to follow.

Suddenly we’re thrust into “Stay“ which starts abruptly with a nice melody and then quickly switches over to a double bass power metal beat. That doesn’t last long and suddenly the beat changes to a cool mid tempo groove with some very nice melodic guitar work. The first verse starts and Federica‘s instantly recognizable beautiful voice comes in crisp and strong. Her voice has always reminded me a little of Shakira at times. I’ve been a fan of her singing since the days of her previous band. This song is mostly straight forward metal with a lot of double bass drumming and nice melodic guitars. Really no electronic sounds until the short interlude before, and then again after, a fiery guitar solo. Federica‘s voice cuts through very nicely and with beautiful and elegant melodies!

“Harley“ kicks off strong and heavy with a menacing riff combined with a haunting yet uplifting synth melody. For the first verse we get a drums and meaty bass intro with Federica‘s crystal clean voice then Federico comes in with some chilling guitar chords which are soon joined by a sound I can only describe as something like an old antique metal-disc music box. It adds a really cool effect! Awesome guitar sound as well! This song is one of the heaviest songs on the album and it also has a really cool guitar solo! It was one of my favorites right off the bat! 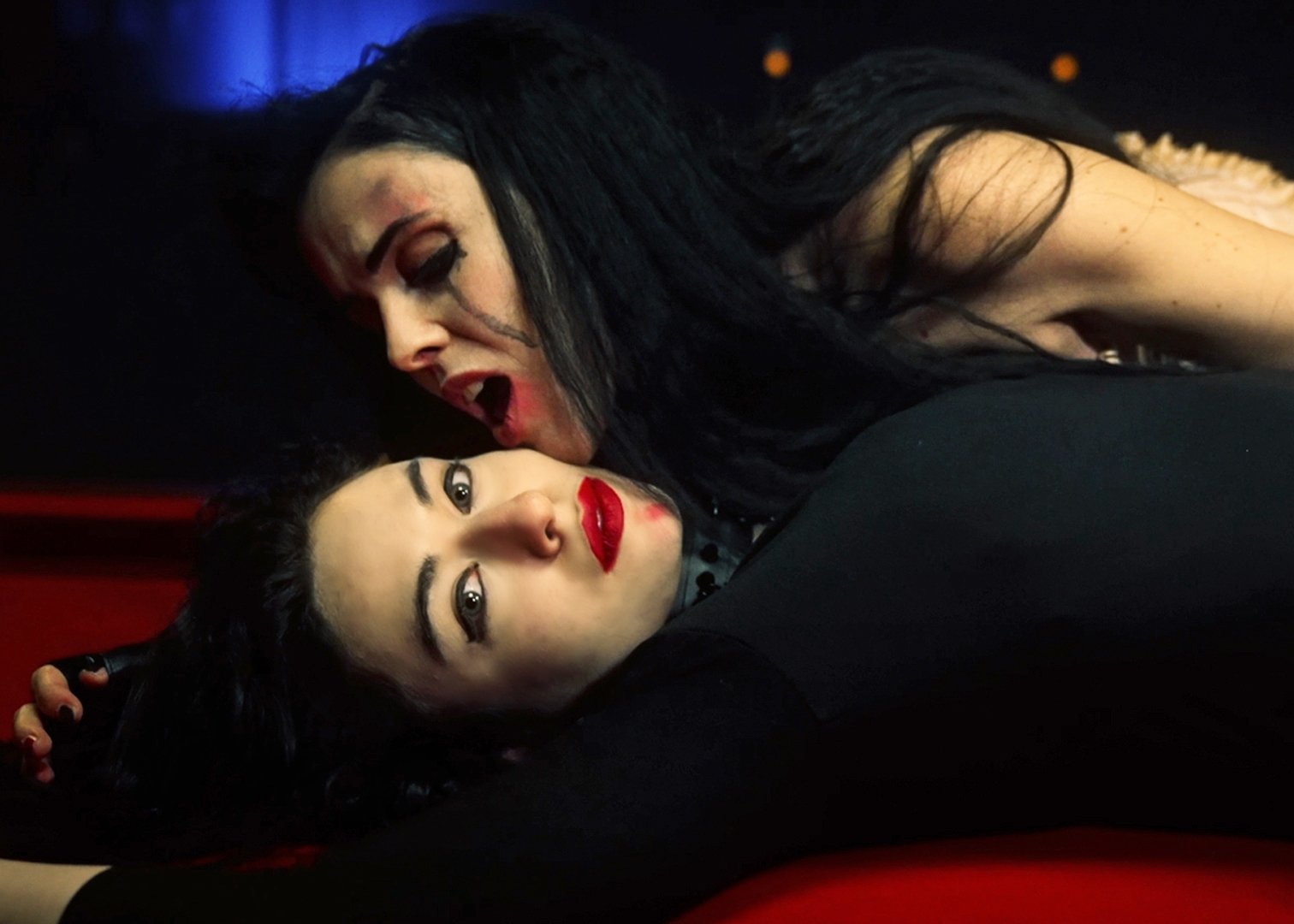 “Empty World“ starts off with a short sort of techno sounding intro then kicks in to a short and very metal riff and groove! The beat stops briefly and the techno sounds come back in combined with a thick and chunky bass line, while Federica sings a beautiful crisp and clean melody over the top. During the chorus there’s some really cool background vocal harmonies going on. Suddenly the music stops and we hear nothing but a cool retro 80’s synth pattern. The drums and bass join in while the synth melody continues and then suddenly the tempo picks up and the drums go double bass while we’re treated to at least three different really interesting overlayed guitar riffs and melodies. One last chorus and we’re done. A really ambitious song actually and so far maybe the most interesting, with several time changes, really cool sounds and melodies and of course, Federica‘s beautiful and sensual vocals!

Things take a very different direction with “Torn Asunder“. It begins with a techno style synth pattern and some airy keyboards. Federica‘s vocals slice through beautifully and then she’s joined by a single repeating thumping bass drum and a rumbling bass line and suddenly we’re transported to a gothic vampire techno rave! I’m kidding, it really seems much deeper than that. Federica sounds fantastic! The chorus is really memorable. It’s lyrics go like this… “You tried so hard to fix me up / But I’ll be a broken soul forever / So close, like our hands could touch / But we’re still strangers torn asunder”. This song is not metal at all. I half expected to suddenly hear that autotune vocoder effect on Federica‘s vocals. It’s definitely got a heavy sort of electronic techno vibe. Very little guitars and what little there are is fairly low in the mix, but it’s actually kinda refreshing! This is the longest track on the album coming in at 5:26.

“Burn It Up“ takes us back into metal territory, but does not forsake the electronic sounds completely. At this point it hits me, something I’ve already noticed but now suddenly fully realize, that Massimiliano Rossi has an amazing bass guitar sound! He gets a fantastic low end while also maintaining a clear and bright quality. It’s a relaxed paced bass-heavy song with layered guitars. The guitar sound reminds me, at times, of classic Uli Jon Roth era Scorpions. Federica sounds magnificent and she delivers another really memorable chorus. 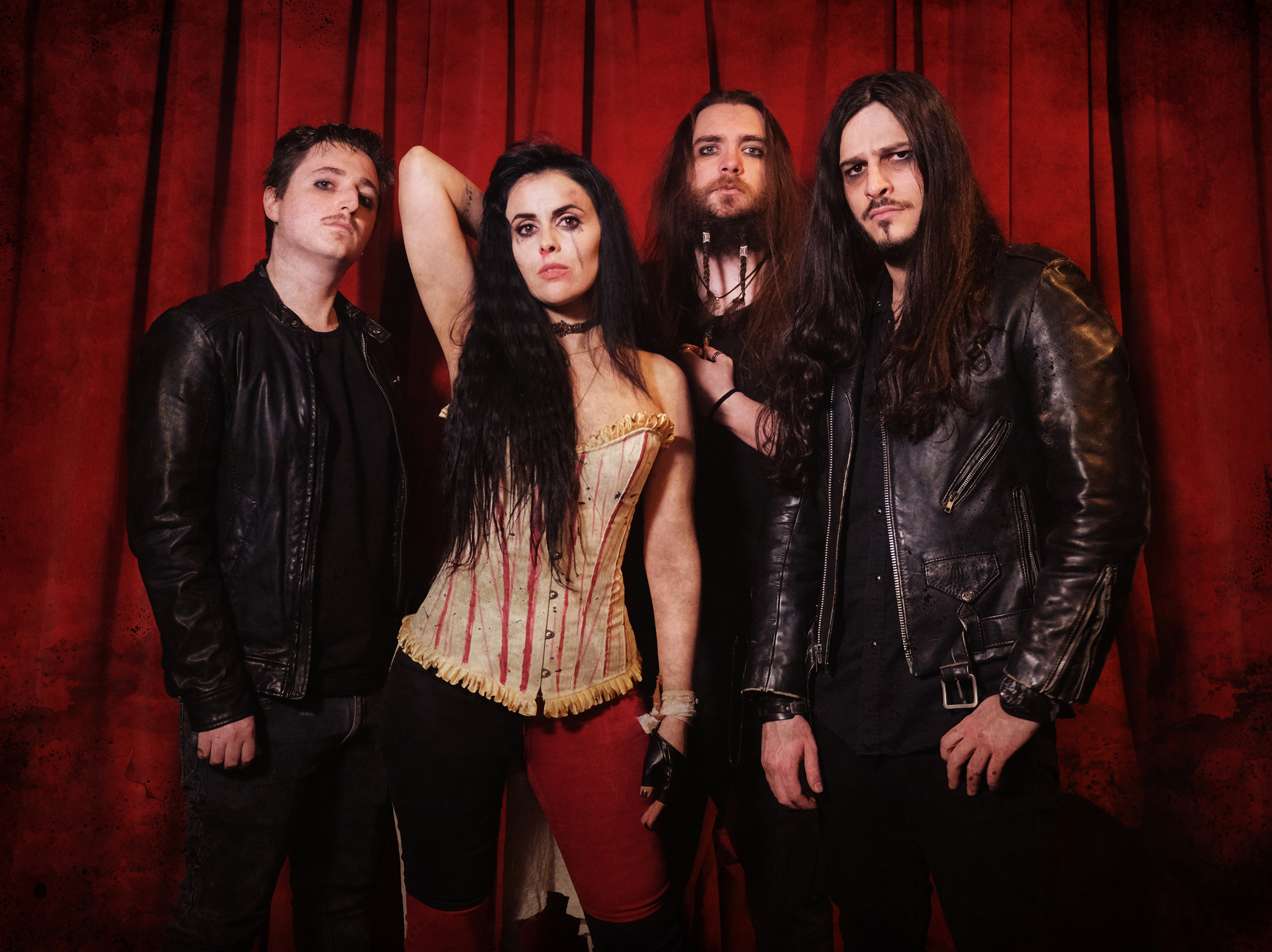 “Distant Caress“ is definitely one of the most unique and unusual songs I’ve ever heard. In fact I’m not sure you can even call it a song. It’s more like a celestial electronic interlude. There are no drums or percussion at all, no guitars, in fact it’s just Federica‘s haunting and sensual vocals, at times just a whisper… synths, maybe a harp and an assortment of electronic sounds. It’s just barely over 3 minutes long, making it one of four songs on the album that’s 3 and a half minutes or less. In fact, the whole album is fairly short at only 39  minutes in length.

“Bury Me“ begins with a retro vibe synthesizer that reminds me of the intro to “Sweet Dreams“ by The Eurythmics. Federica sings a few lines and then the drums and bass kick in. Soon the guitars come in and Federica sings these lines as it builds up… “Lie / Tell me that you’re staying / Like you really cared / Pump some Blood in my veins / Before Killing me / Give me Life to show me / How Deep you’re burying me / Inside”. Suddenly I realize that almost all the lyrical content of these songs seems on the surface, to involve a relationship gone bad with “Distant Caress“ and possibly “Freeze” being the exceptions. Although I suspect there may also be some clever duality in the meaning which also somehow makes reference to Federico‘s interest in the macabre.

“Freeze“ Is one of the heaviest tracks on the album, right up there next to “Harley“, and it follows a similar formula to some of the others. One difference is the double bass drums througout most of the song. It has a really cool guitar intro which I was hoping to hear agin later… but didn’t. And it has one of the best guitar solos on the album!

“Descent“ closes out the album with another short synth-heavy track. 2:30 minutes of electronic sounds and synths. No vocals, no guitars, no bass and no percussion and some nice melodies. 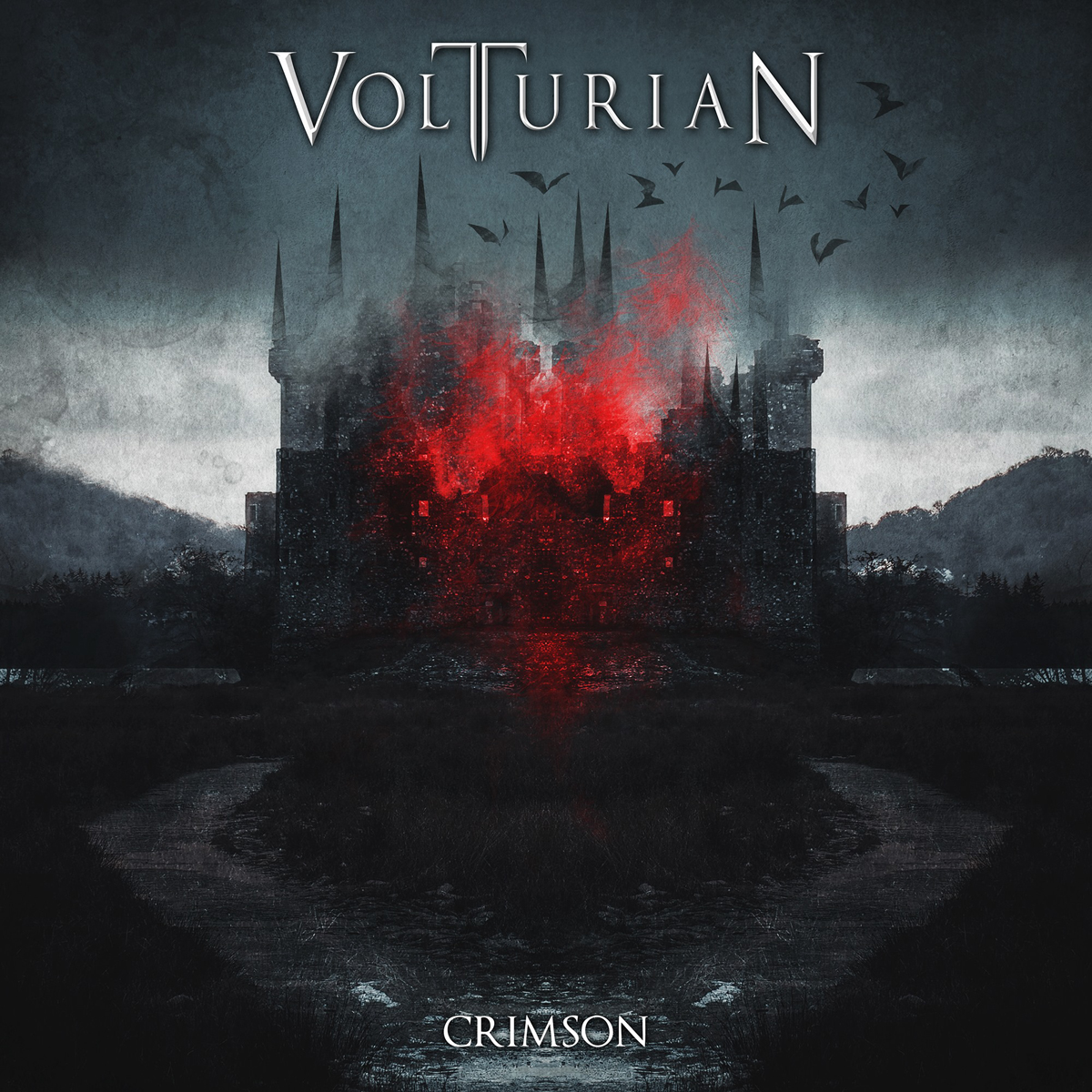 In summary: VOLTURIAN definitely fills a void missing in metal. There are very few bands that I’m aware of that combine traditional and symphonic metal with techno, electronic and retro 80’s keyboard sounds, combined with a gothic flavor the way they do. They do it very well and it’s actually really interesting and refreshing… at times almost like slipping into a warm bath. Add Federica‘s beautiful and distinct voice to the mix and it makes for a really unique and powerful experience!

Federico has shown himself to be a very well rounded musician who is fluent in the language of different music styles and who is not just a great guitar player, but also a very accomplished keyboards/synth player. From what I understand he wrote and performed all of the keyboards and synthesizer parts and also wrote all the music and the lyrics. If you loved “Crimson“ you will most likely love “Red Dragon“. If you dig powerful music with metal and electronic elements and crystal clear female vocals then add VOLTURIAN‘s “Red Dragon“ to your playlist and/or shopping list! It’ll be just like having an old friend for dinner!