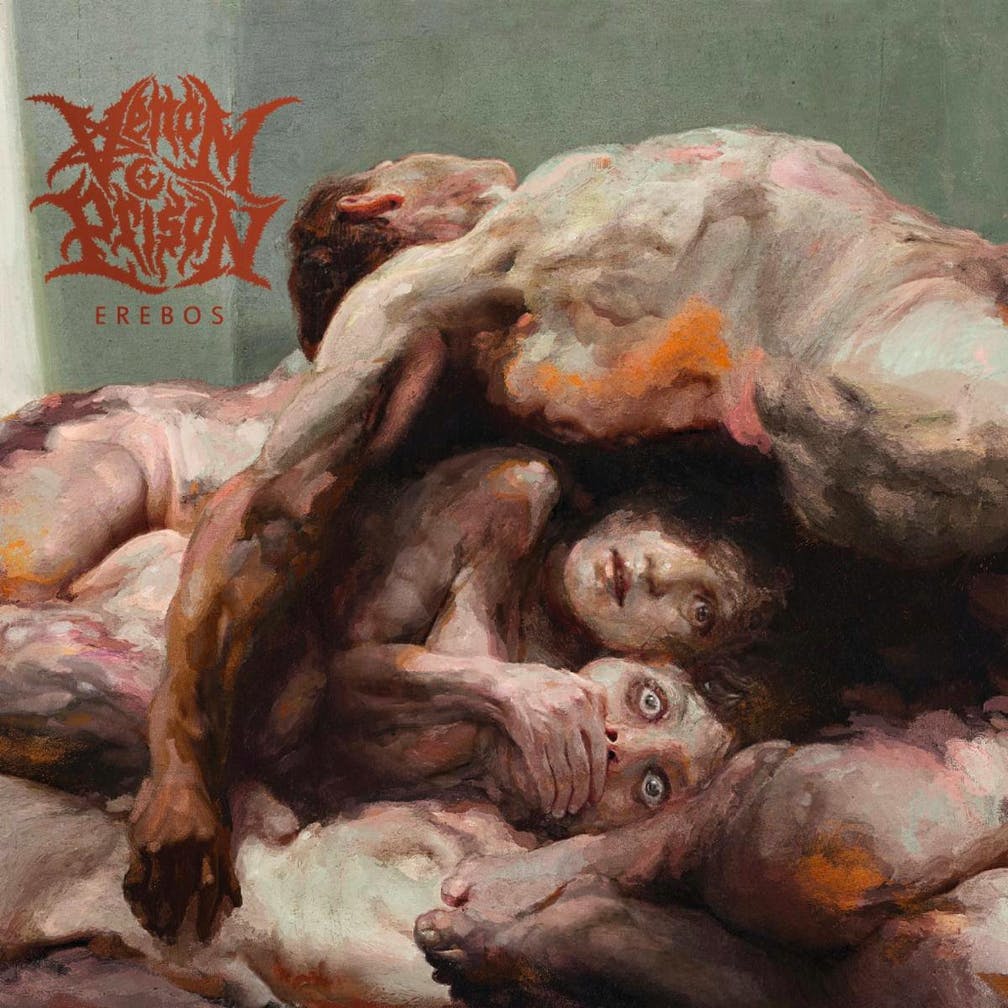 01. Born From Chaos
02. Judges Of The Underworld
03. Nemesis
04. Comfort Of Complicity
05. Pain Of Oizys
06. Golden Apples Of The Hesperides
07. Castigated In Steel And Concrete
08. Gorgon Sisters
09. Veil Of Night
10. Technologies Of Death

With the crushing vocal talents of Larissa Stupar at the helm of VENOM PRISON, the band’s blistering brutality escalates to another level in the extreme metal category and is a gift to truly behold and savour. In what can only be described as an innovatively searing return, VENOM PRISON’s incendiary and highly anticipated release, “Erebos”, teems with rage and the band take no prisoners. Showcasing their immeasurable talent through weighty passages of crushing intensity, vociferous lyrics and a perfectly executed blend of unnerving calm and unbridled rage, VENOM PRISON have created a ten-track masterpiece of pure passional energy. Cleverly marrying punishing aspects of hardcore with fistfuls of anvil-heavy death metal riffs, the female-fronted quintet deliver an unsparing full-length, cleverly paradoxical in song content, masked with allusions to Greek mythology, yet firmly focused on contemporary issues.

A creep of malevolence steadily prises open “Erebos” in “Born From Chaos”, unnervingly pattering to an almighty crescendo of erupting vocal chants that prep your soul for the almighty journey ahead. Crashing into “Judges Of The Underworld”, Larissa impresses with her abrasive and devastating vocal delivery, cleverly blended with smooth, clean backing vocals, to create a warped contrast, with a captivating dynamic complemented by soaring guitar work. VENOM PRISON alludes to the judges of the underworld in Greek mythology, yet the cut centrically fuses aspects of our own judicial system, or even personal judgement, whether literally, or metaphorically speaking. This is just one element of the ingenious measure of “Erebos”, an album that will be pivotal to this generation’s influence in music, becoming a mouthpiece for them and pertinent in expressing societal and political observations and musings.

As intros go, “Erebos” starts off strong and continually strengthens as each track progresses. “Nemesis” engorges you in its hate-fuelled ferocity and spitting poison, Larissa bellowing with bubbling brutality, hammering hard-nosed lyrics into you, driving each note deep into your skin, clearly unfurling as an introspective piece and a ‘fight song’. Once again, VENOM PRISON cleverly use atmospheric build-up to their advantage, unravelling a deceitful, lulling softness of crisp guitars in the intro of “Comfort Of Complicity”, with the pernicious pounding quickly ensuing, the aggression searing through again, juggernaut drumming driving this beast like a freight train loaded with anvils. It’s muscular and well-controlled yet has flashes of rabidity that course through to enhance the thematic perfectly. The noticeably cooler tone to Larissa’s vocals strike a deliberate aloofness that only enhance the emotional projection conveyed. Contrastingly, there’s emotive warmth, fragility, and syrupy moments in “Pain Of Oizys”, as we snatch a taste of Larissa’s honeyed vocals. Once again, the well-thought nod to the Greek mythology concept surfaces, with Oizys, the Goddess of Misery, Anxiety, Grief and Depression, representing Larissa’s own depression, trauma and PTSD. This cut – my personal highlight on “Erebos” – is the most trenchant of the tracks, with a vulnerable transparency and a sense of personal catharsis, that cuts the listener deep. Laced with delicate piano lines, mellifluous moments and an overwhelming sense of outpouring, “Pain Of Oizys” is truly stunning. 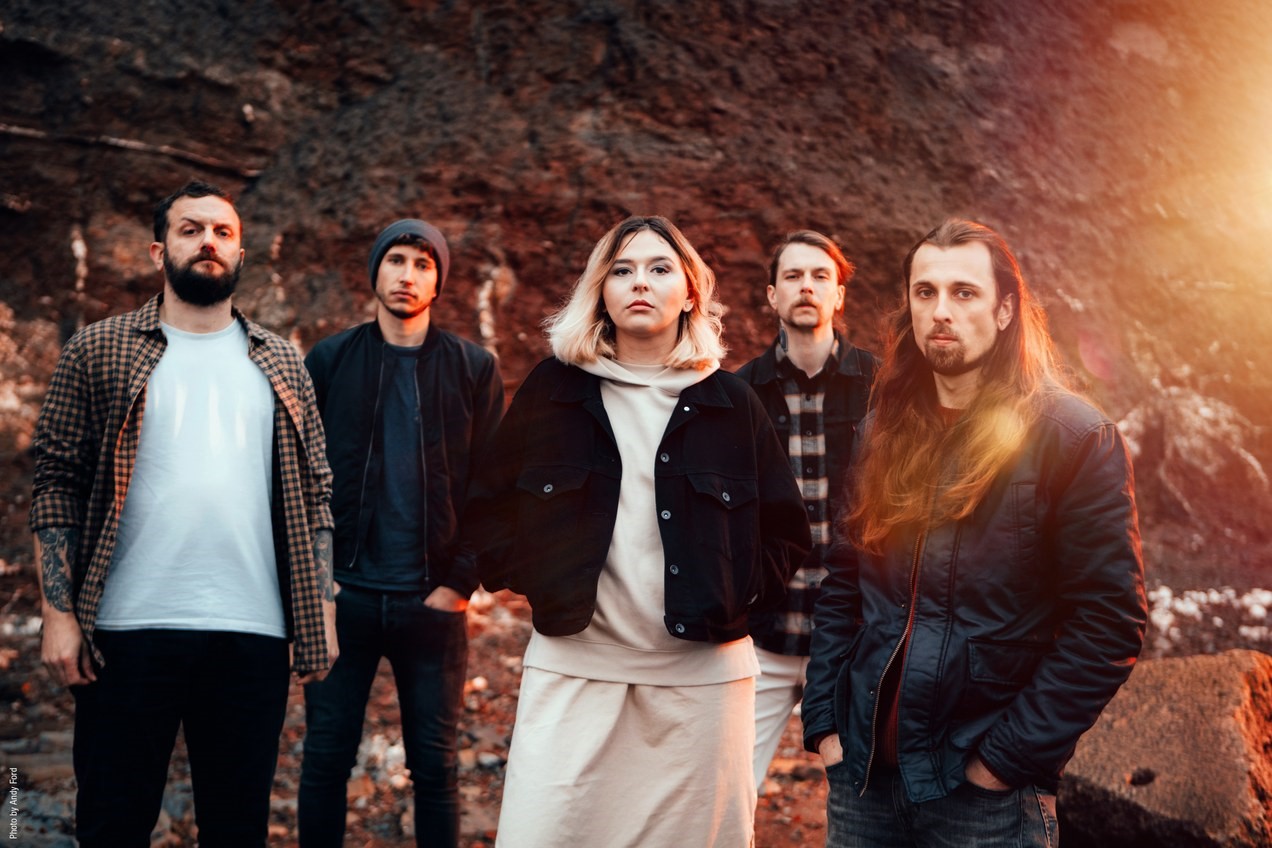 Moving into overtly ripping territory, VENOM PRISON take us to “Golden Apples Of The Hesperides”, for a bite of scathing musical maiming in the form of a more progressive deathcore flavoured cut. Convulsing with rabid drums, Larissa’s gnarly growls and penetrating with an underpinning deep, dark minor riff, the track thematically tackles social media influence and control and nails its negative connotations perfectly. The dizzying structural complexities and diversities of the tracks enthrals, the likes of “Castigated In Steel And Concrete” impressing with temporal switches and contrasting nuances, Larissa’s heartfelt hostility so expertly delivered, the listener feeling every wretched, antagonising affliction. Then escalating the aggression and progressive stance further, “Gorgon Sisters” ignites as an unsparingly succinct, scathing track filled with plenty of impassioned causticity, forging very real issues in figurative form. But it’s not just VENOM PRISON’s ingenious take on conveying real-life through metaphors, nor is it the enrapturing riffs, or even the collectively brutal instrumentation on each track. No, the punitive blend of “Erebos” is backboned by Larissa’s gargantuan vocals and, once again, she sets the bar high in “Veil The Night” and “Technologies Of Death” to bookend a captivatingly mind-blowing full-length.

VENOM PRISON have worked with a pertinacious resistance to diluting their thematic, cleverly intertwining fascinating artistry in their lyrics, yet still unwavering in actively conveying the importance of very real issues in today’s world. “Erebos” is unyielding and unstoppable, unchained and unrestrained in both rhetoric and sonics, and the unfettered artistic genius, amongst the cleverly orchestrated myriad of soundscapes, has you captivated from beginning to end.