Usually, if one invests money, sight unseen, in a product or service, they expect it will be worth it. “Zenith”, the fifth full-length album by the Deland, FL, power metal band SEVEN KINGDOMS, like its predecessor (the 2019 EP “Empty Eyes”), was crowdfunded through Kickstarter. They raised $30,000 of their goal within the first 36 hours. Fans can be assured the result – written during two tours with Unleash The Archers (where they made a big impact) and Beast In Black – delivers a return well worth the investment, thanks to singer Sabrina Cruz, husband and guitarist Camden Cruz, guitarist Kevin Byrd and drummer Keith Byrd.

There’s a lot of effective pacing in the terrific second single and album opener “Diamond Handed” – the hectic blended with the lengthened at exactly the right moments, for instance – and notable attention to detail, like the hollowing-out of the mix in the bridge before the final chorus fleshes things out again. It bears a striking resemblance to touring mates UTA in many ways, especially sonically and in Sabrina’s rich, resonant voice (a mix of Brittney Slayes’ lower register and Kobra Paige’s silken purr), particularly in the anthemic chorus, where her powering up into its punchline is a particular delight. What we’re getting at lyrically is a bit of a mystery – it’s a bit sci-fi, a bit pop psychology (“Fear is the demon of uncertainty / Doubting your own worth feeds the enemy”) – but it sounds so good, the content is immaterial.

An elusive keening melody in the background (is it a keyboard? a guitar?) starts “A Silent Remedy” and pops up periodically throughout. There’s more playing with rhythms, shifting them at intriguing points in the prechorus especially – Keith’s drumming is potent throughout, especially before the solo section. Dark, wordless, chanting vocals add to the mood prior to the second verse, and Sabrina’s overdubbed ones before the final chorus are an interesting play off that idea. This one hints at perhaps extraterrestrials watching us (“Looking upon us all / Far away, conscious minds / They see all”) and not being pleased with our antics (“Disgusted they wait / Hopeful, better days / But it never comes”). But they bide their time (“In the midnight hour / We will make ourselves known / Or maybe not at all”) until we really need them (“They look to the stars / With all of their hearts and their souls”). They are “the silent remedy” to our ills. It ends on an unresolved minor-key note, leaving you hanging and making you a bit uncomfortable, but that’s definitely the intention.

Your typical uptempo “I’ve fallen victim to love” number, “Love Dagger”, is bright and exhilarating but a bit cliched. It’s short, though, and some of the imagery is clever (“Like a blossom in the heat / Wilting together” and “I have fallen in defeat / Losing all my power”), but it feels a wee bit out of place here.

They get back on track with a vengeance with “Chasing The Mirage”. A brisk, brilliant guitar melody leads into a first verse that features Sabrina in a more contemplative mood (“Restless sleep, are you dreaming? Far away, for a moment in time”). She is even more vulnerable in the second (“Captivate me like the sun / Be the fire that warms my heart again / They tried to lead me astray / Cold and hardened, scorned and broken”) as Keith’s galloping drumming adds urgency. The chorus is pretty spectacular sound-wise, warm and layered and memorable; the last two add Sabrina’s defiant shriek “I’m still alive!” to their ends. Another elusive drift of melody rides over the bridge and into the energetic solo section, which then leads seamlessly into the final chorus. You have to appreciate how succinct they are, latching on to a great idea, punching it in and getting out – nothing’s wasted or overstayed.

“Valonqar” is a Game Of Thrones reference – the word means ‘little brother’ and indeed the song is a retelling of the prophecy Cersei Lannister receives, that her brother Tyrion will eventually kill her. And it’s excellent – foreboding, powerful, delicate in its guitar work and trodding tempo. Sabrina’s voice is multidimensional and wonderfully restrained, from the gentle crooning of the first verse to the reflective, more prophetic tones of the prechorus, if you will (there’s no real chorus) to the gritty snarl of the second verse. She’s especially excellent there, the nuances of her voice perfectly suiting the action of the lyrics. But the track works in a wider, more generic context, too, with lines like “Sad the things we do for love” and “It’s the sum of your actions / That’s decided your fate” and the well-done play on words of the opening lines “This world is a figment / Of your creation”. The final lines are a direct reflection of the GOT story: “Fire and blood, life without love / You have set things as they are” (she is to blame), as the opening melody becomes the closing one, carrying it ever more quietly to its close. 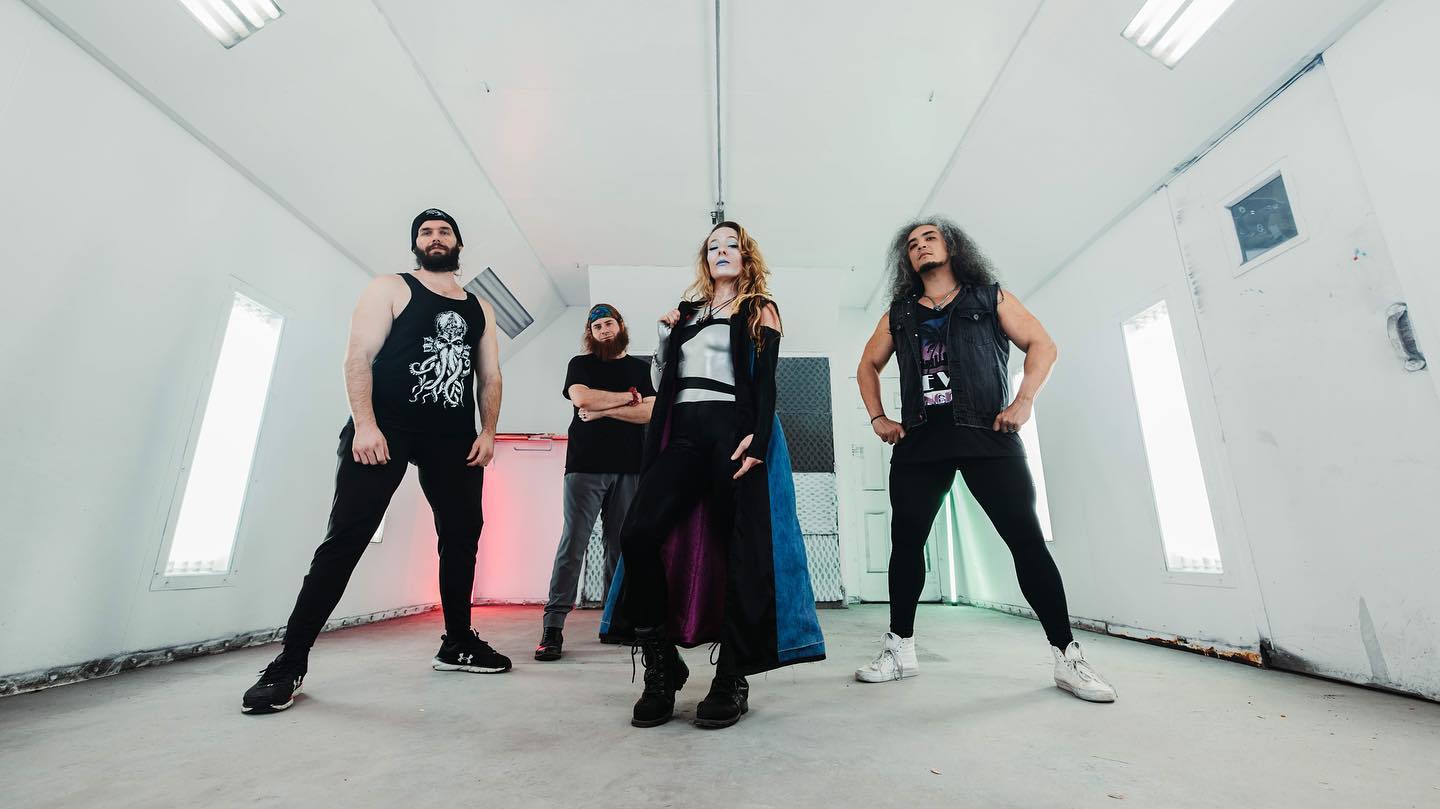 “Empty Eyes” has a similar groove to the previous song, so it keeps that contemplative mood going. Sabrina works more of her higher register here in what one might call self-examination via an objective third party. Questions are posed to the character, Empty Eyes: “Is your excuse your humanity? / Social disease, or insanity?” He is urged to action: “The door is wide open / Fear’s unspoken / There’s no place for you (that is, fear) here”. But he remains inert, as the observer says in the chorus “I am here still standing” and “I’ve seen enough”. The observer goes on to ask “Is this what you want to hear?… After everything you’ve dealt / Are you happy with yourself?” The bridge finds our observer frustrated by the inaction (“I have to see to believe / Is this how it has to be?”) and proclaims the verdict “There is no happy ending”, as the song ends without further comment, musical or otherwise. It’s well and cleverly done.

There’s another compelling keyboard/synth melody that takes charge and sets the mood of “Magic In The Mist”, adding to its space-agey atmosphere. It brackets the verses, the solo sections and the choruses and is a great contrast to the earthiness of the guitars. Sabrina does a lot of that full-throated, rounded-tone, Brittney/Kobra thing in this song, especially in the bright, optimistic-sounding chorus. The lyrics are a bit mystic, again a bit sci-fi (“Head first into the stars / Beyond the gates of eternity” in the chorus ; “With just a touch of divinity / They will see everything you mean to me / Soul survivor, my diamond dancer, I will go” later on and “In the unknown, I am alone… Moonlight darkens the sky / Vacancy awakens me / From blood and ash we rise” in the last chorus) and what they might be getting at is a little unclear. But sometimes it’s enough to enjoy the sounds and combinations of words, the imagery and the feeling you get listening to them, and that’s the case here.

The first single, “Universal Terrestrial”, features several well-thought-out tempo changes that happen at exactly the right time. The bouncy syncopation of the chorus makes it a complete earworm, as does Sabrina’s soaring mid register. It too has a futuristic bent in its lyrics, perhaps the idea of communication between someone and an alien – the first verse hints at that first contact and the uncertainty that this is really happening (“Am I completely insane… Trying to sleep but these visions grow wilder”), then later realizing “Our paths are intertwined / They’re interwoven”. That becomes especially clear with the choir vocals on the lines “Taken/Awakened” and the chorus itself is saying that connection has been made and will remain (“Letting me know where you are / You’re on my mind”). 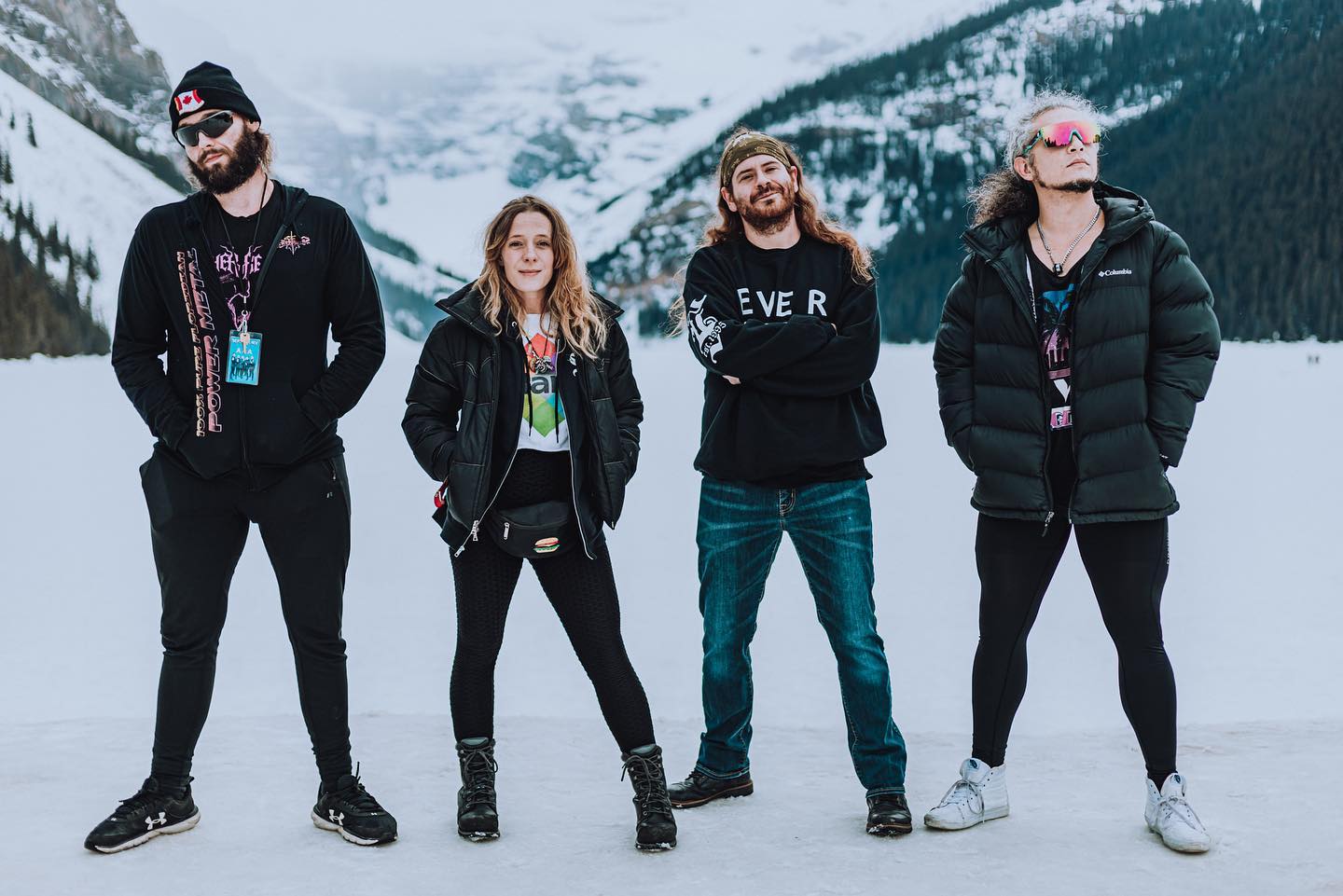 “The Water Dance” is also inspired by GOT, this time, Arya Stark. And the touchpoints are clear to those who know the books/shows: the line “This girl has a name” (how she was forced to remain anonymous for her own safety), “Their names, their eyes” (how she repeated the names of those she wanted to kill, like a mantra), “A daughter of the north” and “The north remembers” (of course), even the title itself, which refers to Arya’s sword training under the tutelage of Syrio Forel. The verses are rather musing, the prechorus builds in intensity as her vow for vengeance is made clear in the swinging, gritty chorus (“Don’t tell me who I am / Who I should be… Today is the day I will sow your fate” and the overdubbing on “Today is the day” gives it a ring of prophecy). There’s strong drama here, in the arrangement, in the defiant, assertive tone – Arya herself couldn’t have said it better.

“Life Signs” is more experimental sonically, not as completely power metal but a bit more progressive than the rest via the tempo changes and the terse, pulsating groove that marks the verses and chorus (which gives edge and tension against the smoother vocals). This is a musing on what’s out there, basically: “Beyond the stars / How much farther can we go / Light years from home / Life signs / Have we been left behind? / Will we know in time?” It also seems to touch a tiny bit on religion, as if that was the solution (“Divine! You’ve made up your mind / Seeking comfort through salvation… Surveying the heavens / For signs of life / Real or imagined / Belief in what they seek”). Sabrina’s full tone gives weight to and grounds the contemplative lyrics.

“Zenith” finishes with a nicely crunchy cover of Joan Jett’s “I Hate Myself For Loving You”. Sabrina’s spitting-out of the lyrics is a change of pace from her usual style – the handclaps throughout are fun, as are the male backing vocals, the a-capella section and Sabrina’s fabulous high screams. But is it necessary? “Zenith” is a power metal album after all, and this is a pretty straightforward rock song, so it hangs awkwardly in context – it sounds tacked on. Save stuff like this for the live show, like the really terrific version of Don Henley’s “Boys Of Summer” they blasted through on the  UTA opening set in Reading, PA, last year.