LEATHER – WE ARE THE CHOSEN 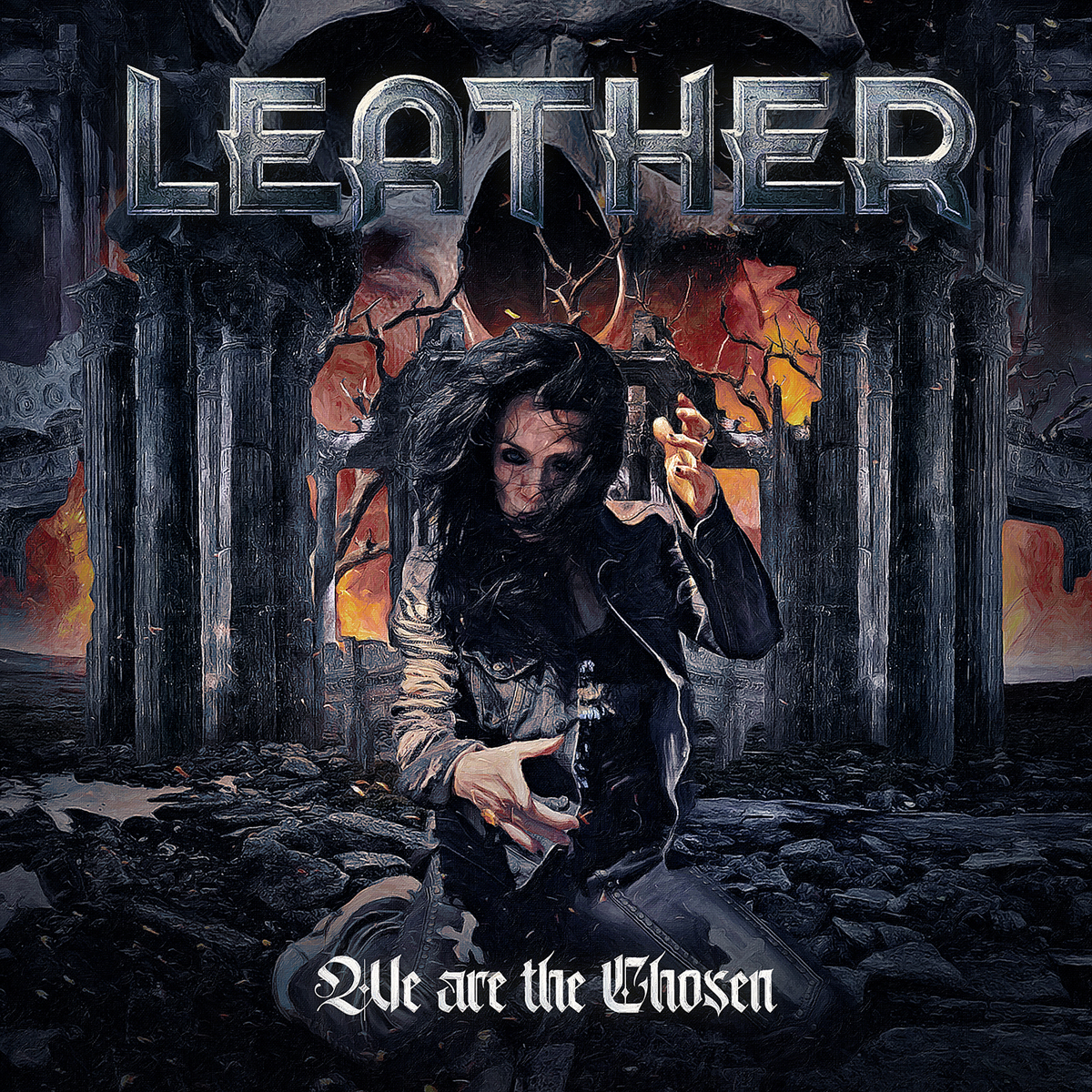 In the ‘80s, she was the frontwoman for Chastain, with guitarist David Chastain, and several other bands and was also a solo artist. But with her latest excellent effort, “We Are The Chosen”, the follow-up to 2018’s “Leather II”, done with guitarist and friend Vinnie Tex, she’s firmly re-established and reinvented herself for the present day.

At 63, Leather is still bashing it up with vigor, as the first track, “We Take Back Control”, makes clear. This is traditional old-school metal, relentless, pummeling and bordering on thrash, with an appealingly dirty, low-fi mix. Her voice is a gritty snarl, her vibrato solid and capable but not overly polished – she sits in a midrange that’s rumbling and visceral. The whiplash of her pronunciation in the chorus is a real treat – you can hear her tongue wrap itself around the words and spit them out, although the mix could be clearer here to make the most of her delivery. This is commentary on perhaps the restrictions of the pandemic, for one (“Let the craft lead my mind / Then it locked me away”) and perhaps a comment on ageism too (“I can see all the gates”, that is, the barriers and biases), “Yet I still dare to stay”. And she’s not giving up – “You need to believe / Our blood runs deep”. It’s simple and straightforward and defiant.

“Always Been Evil”, built around a meaty riff and some really stellar double kick drumming, is just a little Leather M.O. or raison d’être: “Constantly involved with darkness / It’s where I feel alive”, she remarks, “My truth, though never harmless / Will refuse to hide”. When she growls “It has always been evil” in the chorus, dammit, you believe her. There’s some clever wordplay in the second verse: “With every life the story changes / But forever the moon / Will keep the sun afar / Although it comes in phases (get it?) / You give me what I need / Just to wish upon a star”. In the bridge, she muses on change – “I’ve been told to pray / To send the night away” – but yeah, no, “My soul chooses to stay / I belong this way”. She does it again in the final verse, noting: “I’m tempted to move onward / Do I have the nerve / Heaven’s not far from hell”, but the final chorus solidifies her decision to walk on the bad side. 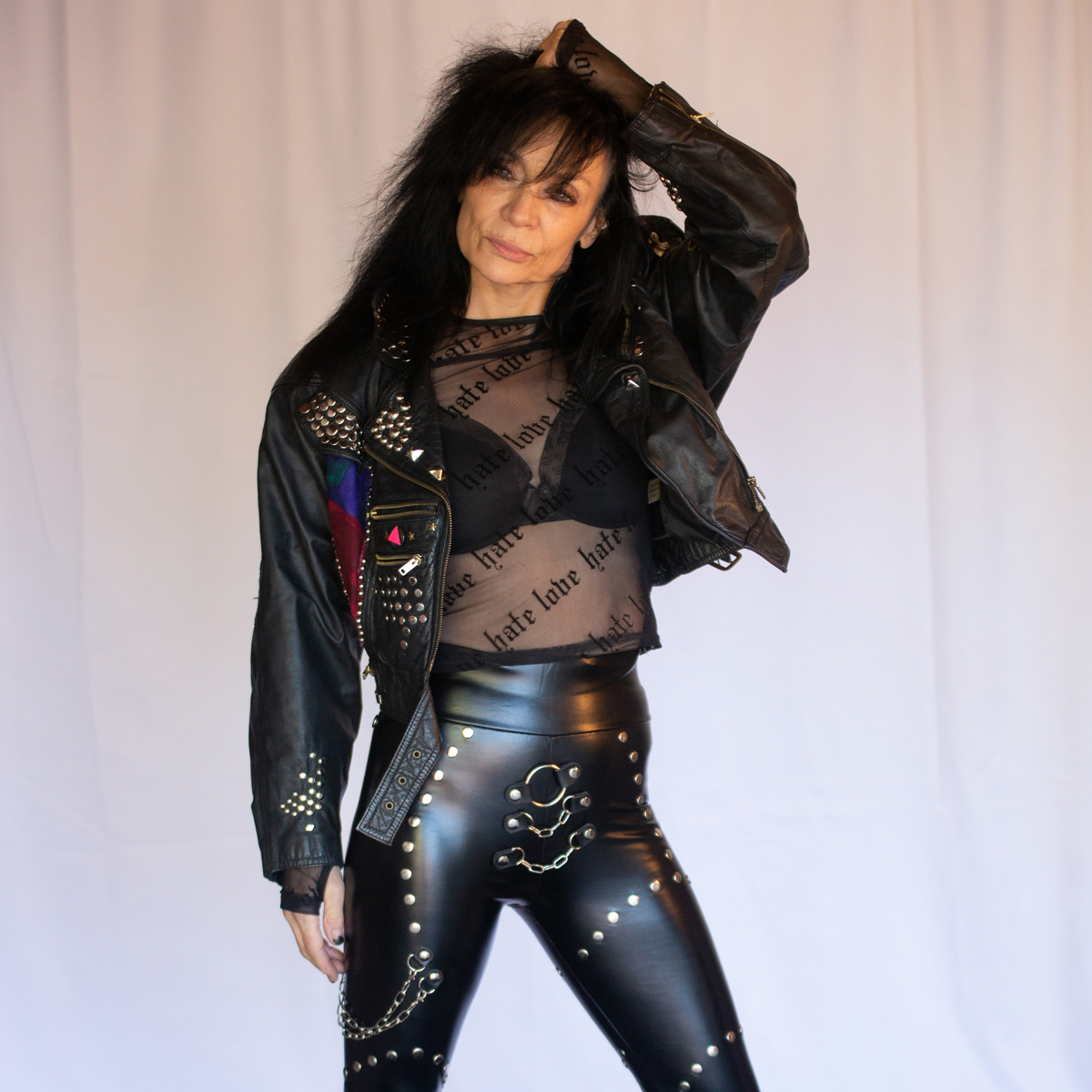 Set to a ballsy, swaggering groove, “Shadows” is similar to “Evil”, an acknowledgment of the darkness inside: “The shadows always find me / But I’m living my life / They never seem to leave me”, she says in the first verse. “The flame inside me’s fading / The dark it calls to me… Addicted, never leave” in the second. The brief, drifting chorus is just the bomb, with a mournful keyboard line dragging it further into the darkness, as Leather says: “Always there to destroy the meaning / Always there, destroy me” – like the darkness destroys the meaning of life. But the fadeout indicates maybe the dark is necessary: “We all believe / Shadows within unholy / You’re so unholy / But I still believe”.

The intro of clean bare-bones riffing in “Off With Your Head” picks up into snapping thrash, then eases into spits of riffing and Leather’s tale of he done her wrong, oozing with sexuality (but not sleaze, good for her). “Gave you wet pleasure today”, she says in the first verse, but “Betrayal came and dragged it all away”. She’s only half-kiddingly plotting revenge: “Contemplated your murder today / My fury comes to make all of you pray”. The second is even better: “I allowed your spit with mine / Never had you possessed it in your kind” and the lusciously insulting coup de grace follows: “You’re so young with no means to know / Let lust evoke you as I go” (get it, girl). The chorus is wonderfully inverted as it proceeds effortlessly to the punch line: “You gave this title to me… bow down with grace for me / Let me remind ya / I am the Queen / Off with your head”.

The title track has a great snappy swing, made majestic by well-chosen bits of orchestration. It’s self-referencing in many ways, not just the “metal is my name” and “metal’s my heart” parts. It’s more when she says in the first verse “Through all the years / It’s crawled on my back / Slithering up from below / Reminding me / Believing”, as if to say the music has always been a part of her. And of course there’s that sense of community –  “We are the chosen / Prophecy that we trust”. Again, it would help if the chorus had a bit more punch mix-wise to make it pop, but it’s not a huge misstep. Her soaring descant at the end on “By the hands of the gods” makes up for it, too.

A stuttering groove introduces “Tyrants” and acts as a transition between verses, where the tempo tightens and increases, courtesy of Braulio Azabuja’s sharp drumming. The lyrics are a bit obscure and filled with metaphor (lots of stuff about “the dragon” and “warriors” and “My altar stood for belief”), but you could see it as having a political bent, particularly in the prechorus (“We’re gonna show what we’ve learned / I’m gonna take what I want / My rage is from your blind betrayal”) and the chorus (“All the liars we have seen / All desires burn in me / All the tyrants we have seen / All the liars ascending”). There’s certainly plenty of righteous anger in her delivery, regardless of the topic.

Dedicated to Leather’s idol, Ronnie James Dio, “Hallowed Ground” is the longest track at nearly 7 minutes – a slow, suspended, rich and dreamy quasi-ballad, with keening keyboards and a moody guitar melody. It’s Dio-esque in sound and feel without being a slavish copy. Her voice is impassioned ; her vibrato and the slight liberties she takes with pronunciations give her singing depth and texture. The lyrics are a subtle tribute to what he meant to her (she signs her Facebook posts “Love and Dio”, after all) – they’re filled with mysticism (“In silence the moon she spoke to me / Having to become part of the light”) and very slight nods to him personally (“I turn to face the fire that’s he / Taking the craft of the wise” and “Entrancing your word til the end”, for example). This is one chorus that absolutely pops – it’s huge and driving, with judicious touches of overdubbing and given modernity by Braulio’s potent double kick drumming (he is great throughout). Here too is where the Dio reference is more overt but still delicately drawn: “Magic comes and magic goes / I thought that you’d be here by now / Magic comes and magic knows / We have found our hallowed ground”. It’s really moving each time it comes around. Vinnie’s solo section is pure ‘80s (nothing wrong with that ; it was the era of the grand solo after all) and the string fadeout is perfect.

“Dark Days” cooks along with pattering drums, lashing chords and a harmony-packed solo section. It’s another song where the actual meaning isn’t clear: it’s certainly some sort of end-of-days scenario and there might be another nod to RJD with the couplets “Talk to the witch on the hill / Against your will / Winds that blow all the black on my mountain”. But it just sounds so good: Leather’s snap of the tongue at the end of words, her throaty chuckle after the line “Coven surrenders you whole”, her riffing on the words at the end of the last chorus – all touches that stamp her personality firmly on the material.

A slightly longer intro kicks off “Who Rules The World”, its tempo a head-bobbing pulse, its main guitar melody touched with ringing harmony. This might be a bit of inner examination, a facing of one’s demons (“Soldiers inside of me / Shade me through the day / Weapons all in my mind / Afraid I’ll lose my way”), maybe a fear of being made irrelevant (“Venom tried to erase me”) and the defiant refusal, as Leather almost shrieks “Learned the hard way, explosion within”. It has an interesting structure – a verse, a prechorus, and another verse – before we hit the actual chorus, reminiscent of “Off With Your Head” in its complete self-assuredness. “Who rules the world, I want it, it’s mine”, she demands, ”Nature is sacred but I am divine”. Her clipped delivery of the final word “send” in the chorus turns it into a droning hum – it’s too cool.

The closer, “The Glory In The End”, reads like a kiss-off in a bad relationship – “You left me alone on the mountain… Facing the river of tortured devotion”, she says, but she’s trying to “Pretend, continue to believe”. In a wonderfully-paced and staccato rejoinder, though, she hisses “The trust with us is broken” and vows “Never will you conquer me”. The chorus is her “I Will Survive” moment, and she’ll be fine, thanks very much: “Don’t look at my paradise / It’s not your end / You’ll never see / The glory in the end”.

“I am the Queen” is right. Yeah, I wanna be Leather when I grow up.