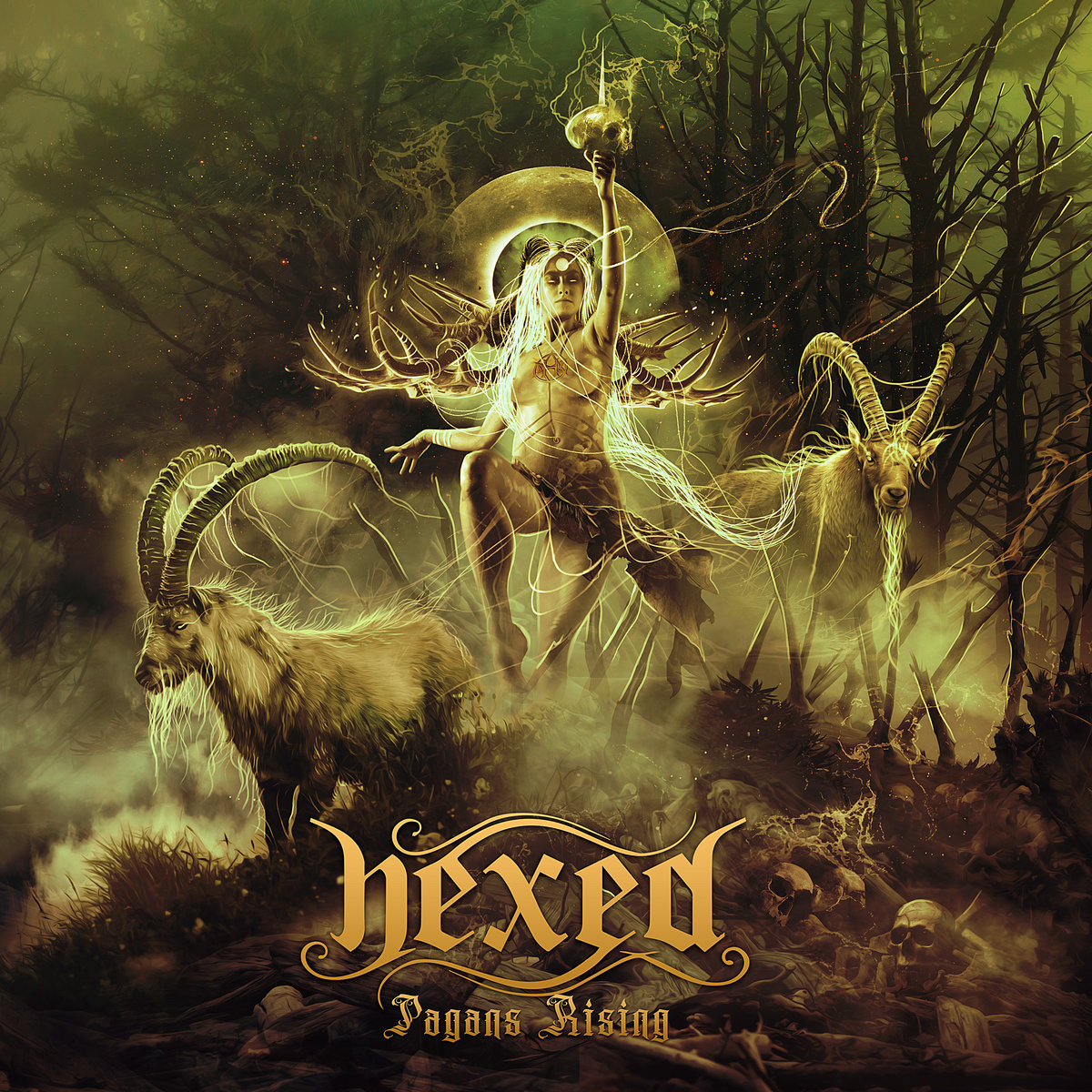 The last four years, long as that wait was, were ultimately well spent for the Swedish symphonic progressive metal band HEXED. Singer Tina Gunnarsson, husband and guitarist Stellan Gunnarsson, guitarist David Nyman, bassist Daniel Håkansson and drummer Patrick Wahlberg used that time to hone their craft, as is abundantly clear from their new sophomore effort, “Pagans Rising”. The follow-up to their 2018 debut “Netherworld” is basically a concept record, not relating an exact story but exploring a theme: a pointed condemnation of Christianity as it relates to the older religions. The songs fit together and relate to each other accordingly, to great effect.

The title track is really a perfect introduction to that concept. Tina delivers the opening as-you-sow-so-shall-you-reap salvo “Open your doors to the gates of hell” in a booming, gritty roar before the dramatically orchestrated main melody kicks into gear. The references to the persecution of the old faiths are plentiful: “Bound into the brutal scenes of a dark history” in the first verse, “Glory of the power-mad men / Disintegrated faith / Forces will demand redress” in the second. Stellan’s harsh vocals in the prechorus – “You burned, you died / For someone else’s lies / Now the time is here / When all the fallen souls will rise” – is the foreshadowing to Tina’s shrieking chorus of the retribution that is nigh. Just from this opening song, the band’s progression is obvious – the density and balance of the arrangements, the tightened, focused songwriting, the hewing to musical and lyrical concepts.

The creepy little piano tune that begins “Resurrection” is taken over by synth and then guitar, leading into a compelling melody and a chugging groove, with Patrick punching in some well-selected change-ups in his patterns. Thematically it’s a continuation of the title track, noting how interest in the old faiths is continually reborn (“Through the eyes of time / You’ll see the rise and chapters are written again” and “Down your bloodline strives a future force again”), Tina asserting in the chorus, “This is our time”. While she may call this idea an “Evil execution”, it feels almost like a cleansing – she repeats several times, “We shine” and calls this resurrection “A damnation of war”, proclaiming that “All the patterns of patriarchy has to vanish now”. It’s a taut, well-drawn piece with plenty of sophisticated touches, like the musical interludes between each line of the final chorus and the return to that eerie piano at the end.

The choir vocals that begin “Stigma Diaboli” (‘the devil’s mark’) give that real sense of religious persecution, that good (choir) versus evil (the guitar). This is a personification of that persecution: Tina’s voice in the first verse is breathy, quivering in terror as she describes the “Hunt  … for the mark” and knowing “The trial, the denial / Will never be enough to prove my innocence”, so she whispers, “Now I run”. The chorus gives full voice to her desperation as she flees. The brief second verse is pointed on so many levels: “My imperfections / Will match your only wish / To convict me”, those “imperfections” being the real “stigma diaboli” – there’s no devil’s mark except that which is manufactured against her. Before and after the solo section, she again breathes “Now I run”, reinforcing that sense of fear, and the choir brings it to an uneasy close.

“Repentance” is a prime example of the development of HEXED’s songwriting, a brief but potent song honed to the bare bones of purpose. It’s again a really good transition from “Stigma”, its chorus demanding “the apology, a collective statement” from those who hunted wisewomen throughout time (the changeup in the melody the second time through each chorus is an aural treat too, by the way). It points out how those women were ahead of their time during the heights of their persecution (“Out of the darkness / We brought the light / To a world with tired minds”) but that they were “victimized and sacrificed” even though they “offered remedy” (perhaps a reference to how they often helped with unwanted pregnancy). The bridge is poignant, Tina mourning “A thousand defeated lives / But the traces are forever gone”, as Stellan rages in the prechorus, “No one will remember”. 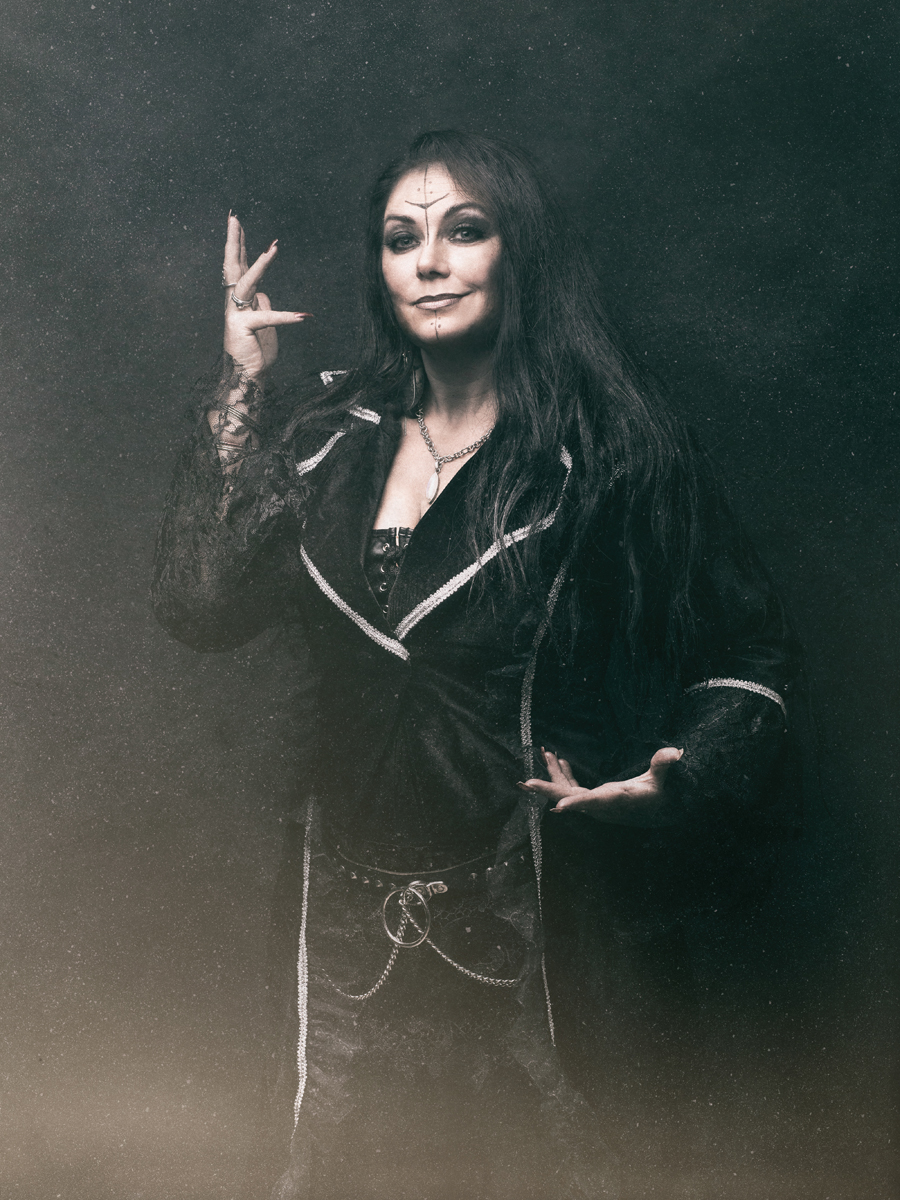 But in another careful segue, “Incantation” is the witches’ revenge. Tina condemns “We sentence you to a life in the dark”, to those who “followed maleficium (defined as “a magical act intended to cause harm or death to people or property”) to be the law / Just as lambs of God”. The implication here is that men of God were the real evildoers – that they were the ones who “brought hell on earth upon us all” and they “can’t disavow (their) acts” – and that the women will bring “the divine retribution”, which is a clever twist. That’s supported by the sing-along earworm of a chorus. And just before the solo, Tina sings in an airy soprano “We place this curse upon you now and forever” in a sort of sing-song way, as if to say, well, you can only blame yourselves for our actions. It’s really effective.

Crunchy riffing is the foundation of “Prophecy”, a kind of musing on the idea of what might happen after one has heard a prophecy and the confusion it leaves behind: “The future you had just turned into a broken puzzle / The unsolved riddle in your mind / With all these missing pieces”. Its very chorus is the nature of prophecy in a nutshell, which is nicely done – “The riddle hides within this mystery” and “between the augury and history”, augury being an omen, which is where a prophecy might fall, if you think about it (it’s a mix of an omen and the events of the past). Ultimately, though, as Tina notes, “It’s your call to solve the riddle of our prophecy”, like we just deliver it, we don’t explain it, that’s up to you. It might run a wee bit long, but it’s well balanced and well mixed, especially with Tina’s vocals.

A ringing, bell-like guitar tone and terrific double kick drumming are the stars of “Symphony Of Tragedy” – as is the interplay of Tina’s voice and the solo guitar line in the chorus, neither one fighting the other but instead playing well together. Tina’s diction in that chorus shows one of her many strengths as a vocalist – she’s not a sloppy singer or an affected one, there’s a cry or a grit in her voice only when there needs to be. This might be perhaps the aftermath of said tragedy (“We lost our lives into this symphony / Where the river runs wild, a catastrophe”), perhaps seeing it in one’s mind’s eye or remembering it from the distant past, as the chorus seems to hint at: “Under the sign of the black mark / We hear the cries / A never ending curse, nothing remains”. The very idea of a melody, of individual voices, blending into a symphony, of so many voices, is simple but powerful.

“Blasphemy” is a pretty straightforward symphonic metal song – dark chords, an icy main guitar melody – but the well-thought-out details make it special. Tina plays the character of the witch, being pursued by “the dark hooded men .. claiming to be on a mission / And from heaven sent”, and it’s chilling when she quietly notes that they are “Gathering by the lake, to seal my fate”. Stellan sings the chorus as those “Men of God”, “On a holy mission to preach and protect” and “Screaming you shall not suffer a witch to live”. It’s a small touch that makes perfect sense. Later Tina describes, almost dispassionately, the old witch trial by drowning – “Forcing me into the water / With this thin layer of ice” – it was claimed that if an accused woman sank, she was innocent. But the best part of this song is the ambiguity – who is committing the real blasphemy, the “witch” or the priests? We know now, of course. 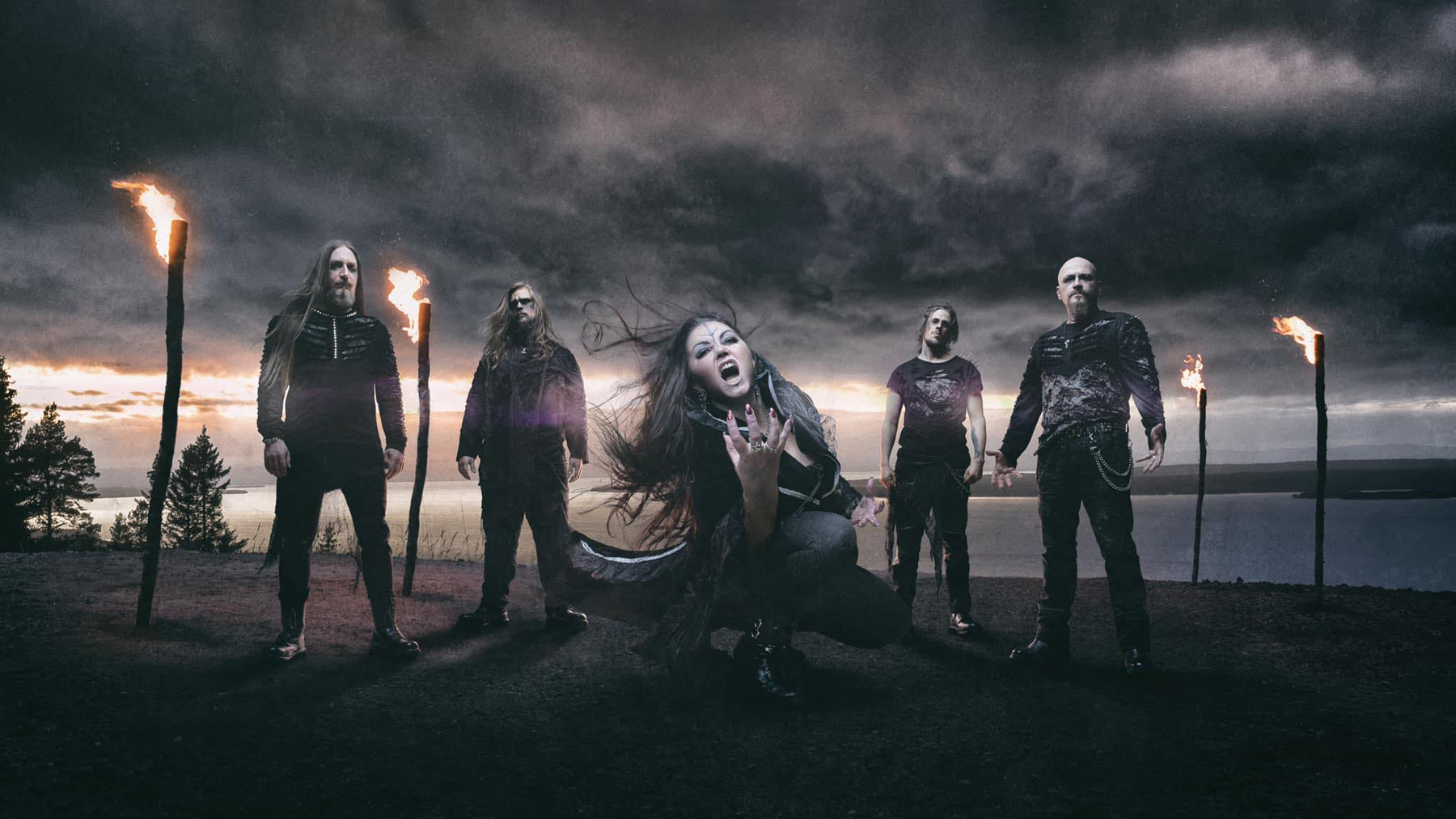 “Dark Storm” is a continuation of this idea – this time of a great many women doomed to die – set to a deliberate marching tempo undercut by the urgency of Patrick’s double kick. The verses have almost an Eastern feel as Tina asks us to “Imagine the loss of innocence … (the) paralyzing fear” in the first and relates the awful scene, “They demonize and sacrifice … punished for witchery / Convicted for sorcery” in the second. The prechorus picks up speed as the action intensifies – “You can hear the children aware / As witnesses they were called / To brutally kill them all” – and the chorus assures that these horrible events will never be forgotten with the line “There’s a story beginning / Can you hear it”.

“Moorfield” then, is that story of one of those accused women heading to her end and Tina wisely gives it the restraint and thoughtfulness it needs to keep it from drifting into the maudlin. The details are agonizing in the first verse – “1674, I’m dragged through the snow / Flakes are falling, it is covering my prints / My feet are numb from the cold ground” – but she is not looking for pity. The prechorus builds in almost joy or relief as she knows she will soon be “Free from misery” and the chorus is a full-throated plea: “Someone, remember me / When I’m gone / Someone reflect upon my destiny”. In the bridge, Stellan again plays the voice of judgment, berating her “Heresy and contempt for God… (that) leaves you standing here” (and again, there’s that ambiguity – who’s the real bad guy here?) But Tina gets the last word on the chorus, demanding to be heard, even as her voice cuts off to a piano-and-strings finale. As the title track was the perfect start, “Moorfield” is the perfect close to a very solid album.