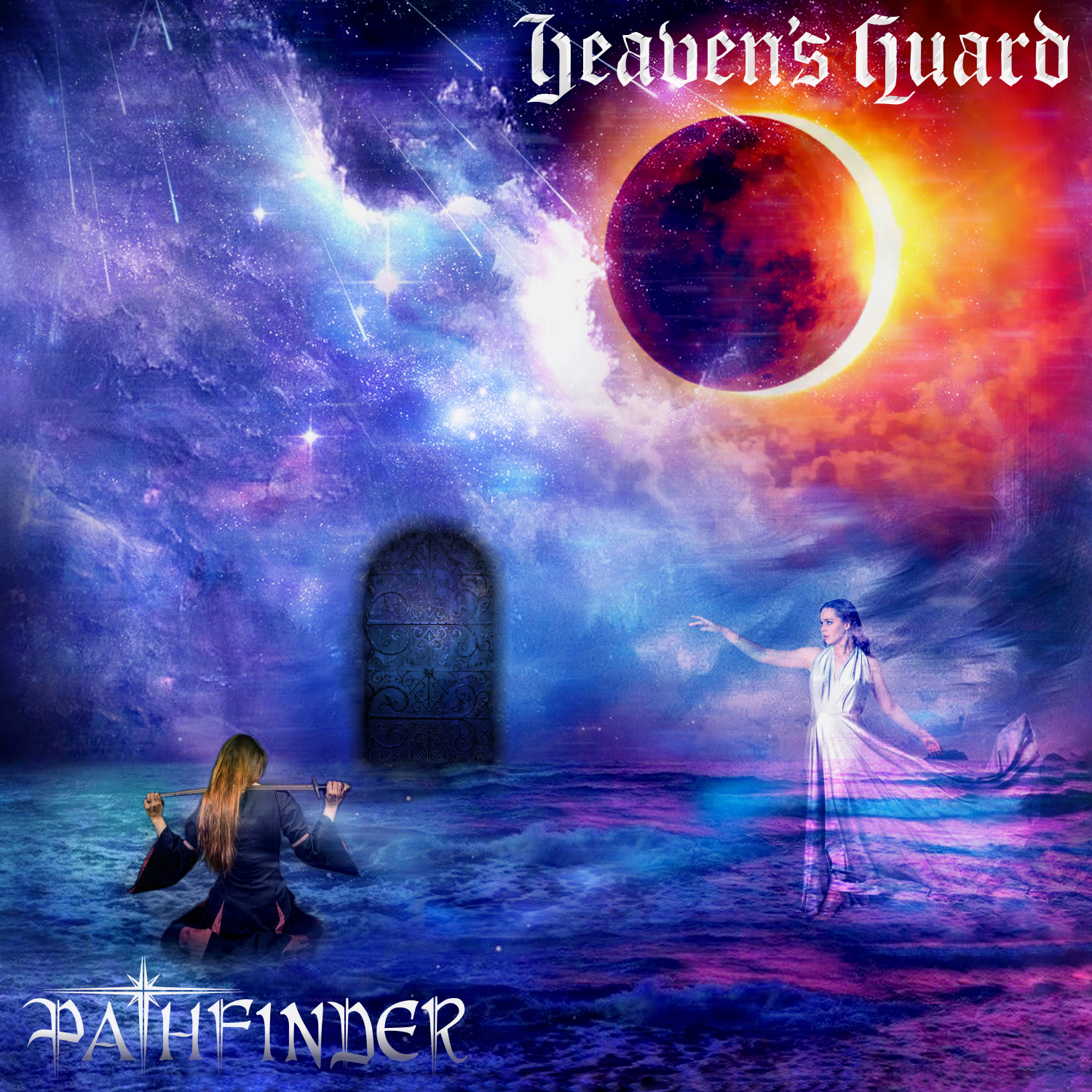 HEAVEN’S GUARD is a German symphonic metal band from Hanover. The idea for the band first originated in 2017 with guitarist Steven Meißner. The first two musicians were quickly found with Doreen Fleck on the microphone and Kevin Küppers on the drums. It took a good year until the group could fully rehearse for the first time with Karsten Bergos on the keys and Daniel (2018-2020) on the bass.

In regards to the band’s name, the idea began with Steven‘s interest in the supernatural. He says: “I like the idea of the existence of entities like Angels, Demons, Heaven and Hell. Those are abstract terms of an idea that lies beyond human understanding… Our name then results from a consideration about what a Heaven could mean in the first place and I came to the idea that a place without a specific subset of my current life could impossibly be a Heaven for me. With this idea in mind that every subset defines Heaven for every individual, shouldn’t you keep those things safe then? In the end, everyone is guarding his own Heaven and is therefore somewhat HEAVEN’S GUARD.“

The band describes their music as “powerful and mystic melodies, epic orchestration and classical vocals combined with powerful and heavy guitars creating a unique sound.” I would agree with that and add that some of their songs have progressive qualities and even some elements of neoclassical music and power metal.

At the same time the band started planning the production of their first studio album, Chris Jakubeit took over the position on bass that had become vacant in the Summer of 2020. In December 2020, HEAVEN’S GUARD finally announced their first album would come under the name ”Pathfinder” and released their debut single ”The Cause Of Destiny” along with the official lyric video. The release of the single brought the band some attention, including that of the record label Boersma-Records from Essen. On March 31, 2021, HEAVEN’S GUARD revealed that they had signed a deal with Boersma-Records. On December 10th, 2021 they finally released the lyric video and single for “Deepest Voice“. Also in December 2021 they announced the release date of the album will be Friday, February 11, 2022.

After receiving the songs for “Pathfinder“ I began listening every chance I got and just getting myself familiar with the songs. I feel I’ve heard them enough now to go ahead and start writing my review. So here we go!

The album kicks off with a bang as the opening to “Obscurity“ pounds away with drums and guitar in unison with choir sounds and synths. After the intro the song kicks into a higher gear with a double bass drum pattern in step with the guitars and more choir sounds following the guitars closely. Vocalist Doreen Fleck then comes in with her very high pitched soprano operatic singing style that I found is mostly typical for her throughout the album. She does have a beautiful tone, but for me it is a bit difficult to understand the lyrics. Let me just admit right up front that I have never been a big fan of the operatic vocal style of singing. Those who are though would surely enjoy her vocals as she does have a very soothing tone and seems to sing that style very well. I do like the nice crunchy guitar sound though and the way the keyboards sort of sound like a gothic choir. The drums are nice and punchy with a lot of tasty double bass drum work without overdoing it. The bass sound is powerful and tight. This is the longest song on the album at 5:42.

Next up we have “Veiled In Mist“. It starts off similar to the first song, but soon adds the harpsichord sound which I’ve always enjoyed. The vocals during the verses are slightly less operatic than the first song which I like, and then during the chorus she switches back to the operatic style. Some nice switching back and forth as well with the double bass drums during the chorus and single bass during the verses. At both the 0:52 and the 2:03 mark we have two really cool instrumental breaks with double bass drums and guitars syncing up with the harpsicord, which leads back into the chorus and then after a really short synth interlude. About the 2:56 mark it slows down briefly and a really nice riff kicks in with the guitar and bass locking in tight together with a nice synth sound carryinging it along followed by a short but cool transition and right back into the chorus. Then they finish things off with a cool outro with Harpsichord for the ending.

The third track is called “Fallen Angels“. It starts off with a synth heavy instrumental intro then with drums which gradually adds more guitars and lasts a full minute before the vocals come in and the first verse starts. Sort of reminds me of a Finnish band called HB that I really like. Doreen starts off with once again a slighly less operatic sound which I thought was nice, but then quickly switched back to full operatic. This is probably the best song so far in my opinion. Kinda has a Nightwish – “Amaranth“ sound, but leaning a little heavier on the symphonic elements. At about the 2:21 mark we get our first taste of a guitar solo. Very melodic, nothing too flashy, but well played. A really good song in my opinion. 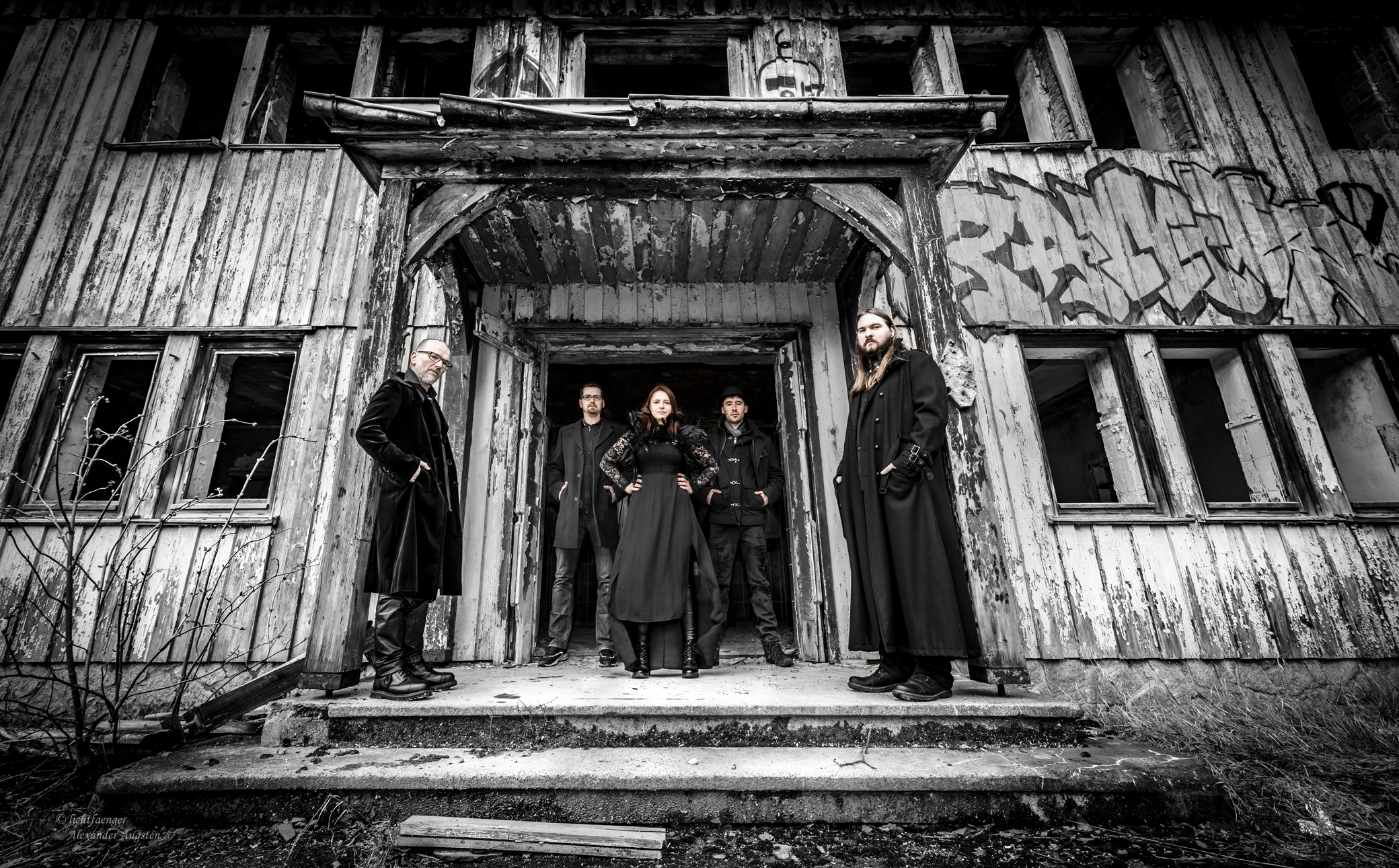 The following track is named after the band, “Heaven’s Guard“. It starts out with a nice heavy energetic and slightly complicated intro, and then the first verse starts in. It’s a fairly synth heavy track with double bass drums and sprinkled with the Harpsichord. This one is very much staying close to the same formula as the others, but perhaps slightly more uptempo with longer instrumental parts. Pretty cool, but nothing really stands out to me too much except for the drums. A lot of nice tight double bass drumming and a short but interesting guitar/keyboard solo exchange.

“Passenger Of Charon“ is next. This is the shortest track on “Pathfinder“ clocking in at just 3:36. It’s a driving uptempo rocker with choir sounds and fairly standard synth sounds. Guitars and bass closely locked in again and great sounding drums. The chorus is fairly catchy.

To my ears, the sound of “Deepest Voice“ is, once again, a bit reminiscent of early Nightwish with a slight resemblance to “Lucidity“ era Delain. It starts with a nice short piano melody and quickly kicks in to a nice brisk uptempo pace. Then the vocals and synths come in. The guitar sound is nice and crunchy. The drums and bass are fairly simple in terms of technicality but they’re locked in tight together and the sound is powerful and strong. Everything drops out near the halfway mark and there is a nice brief mystical sounding synth interlude which gives way to the crash of the guitar, bass and drums, and the song quickly builds right back into that driving riff while a fairly simple, but melodic and effective ‘Paradise Lost sounding’ guitar solo rips! It’s a driving song that only lets up for a brief moment. This one also has a lyric video. As for the meaning of the song, I can’t quite place my finger on it. Doreen‘s voice sounds beautiful and it’s actually a nice cathchy tune and much like all their songs. I found that the more I listened to it the more I liked it.

Track 7, “The Cause Of Destiny“, was originally released in late December of 2020 as a single with a lyric video. I can see why they chose it as their first single. It’s possibly their most epic and progressive song with even some power metal elements. Very nice! The lyrics seem to address how the choices we make in life directly affect our destiny.

“Plato’s Cave“ is another longer song, the second song to clock in at over 5 minutes. This one is a bit heavier than the others which I like very much! It still has the symphonic elements, but also has a slightly heavier guitar riff which seems to be maybe just a bit louder in the mix. Reminds me a bit of earlier Delain from the “Lucidity“ album which I love! Doreen‘s voice is still very much in the operatic style and soprano range but seems to soar with a bit more power than some of the other songs. I like this song very much. Actually, all their songs are really good!

The title track “Pathfinder“ is placed at number 9. It jumps right in with the double bass and doesn’t let up much throughout the whole song, bordering on power metal the entire length. Their drummer Kevin Küppers is a machine! I’m a drummer myself and although my glory years are probably behind me for the most part, I do recognize and enjoy a good drummer and this guy can definitely bring it! The whole band is really tight and Doreen‘s vocals cut through the mix very nicely!

“Worlds“ is officially the last song. After a short mystical sounding synth intro, it transitions into a sort of tribal beat with a very nice heavy guitar riff as the vocals also begin. Doreen delivers a very nice melody with a slightly less operatic emphasis at first, but then soon settles back into her operatic style with some chorus style background sounds. 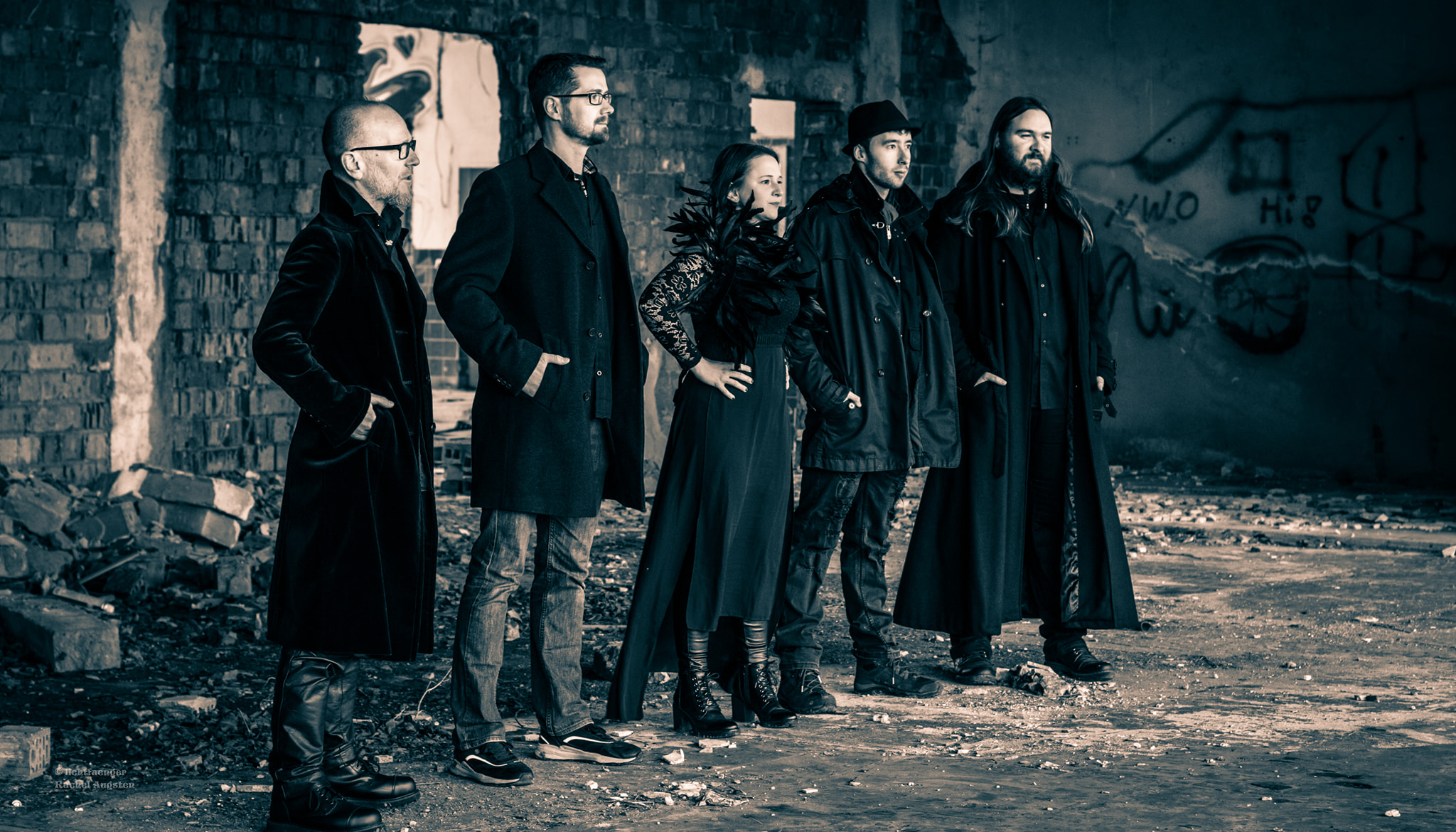 There is a bonus track at the end included with the promo package I received called “Symbiosis“. It starts off with a short intro that sounds like a harp, then a guitar swell leads into thunderous toms and synths kinda like what you might hear in a movie during a war march. Then the vocals come in as the beat changes to a military style sounding snare drum pattern in unison with the guitar and bass. It’s actually really cool and a bit different from the other songs. There’s also a short guitar solo and then it ends with the same harp sounds as it started with.

To sum it all up, I think it’s a very strong effort and a worthy debut! I really like Steven‘s guitar sound and the way his guitar and Chris‘ bass stick closely together most of the time giving the songs a thick meaty backbone. I personally love guitar solos and of course, would have liked to have heard more of those, but there’s some really cool riffs and there are a few good tasty but short melodic solos on there as well. The drums are fantastic! They sound terrific and Kevin is an amazing drummer! Karstos does a great job with the orchestration, creating atmosphere and dramatics with various sounds and melodies on the keyboards and synths. They may be just a tad high in the mix for my personal taste but fans of symphonic metal will surely find it very satisfying! As I’ve already stated the operatic vocal style isn’t my favorite, but Doreen has a beautiful voice and she does a great job! There is something slightly more appealing in her voice to me than most I’ve heard with that singing style. Most of her vocals do sound fairly similar though and I would like to hear her explore more variety of tones and styles. If I was to name a few bands to give the listener an idea of what they sound like, I would mention early Nightwish, Delain and the Finnish band called HB. The sound quality and production is top notch! The songs are well written and I’m sure the writing will improve even more with time. But I think they’ve done a really great job, especially considering this is their first effort. The more I listen to it, the more I like it and I think the band is certainly on to something special! HEAVEN’S GUARD is definitely finding their path!