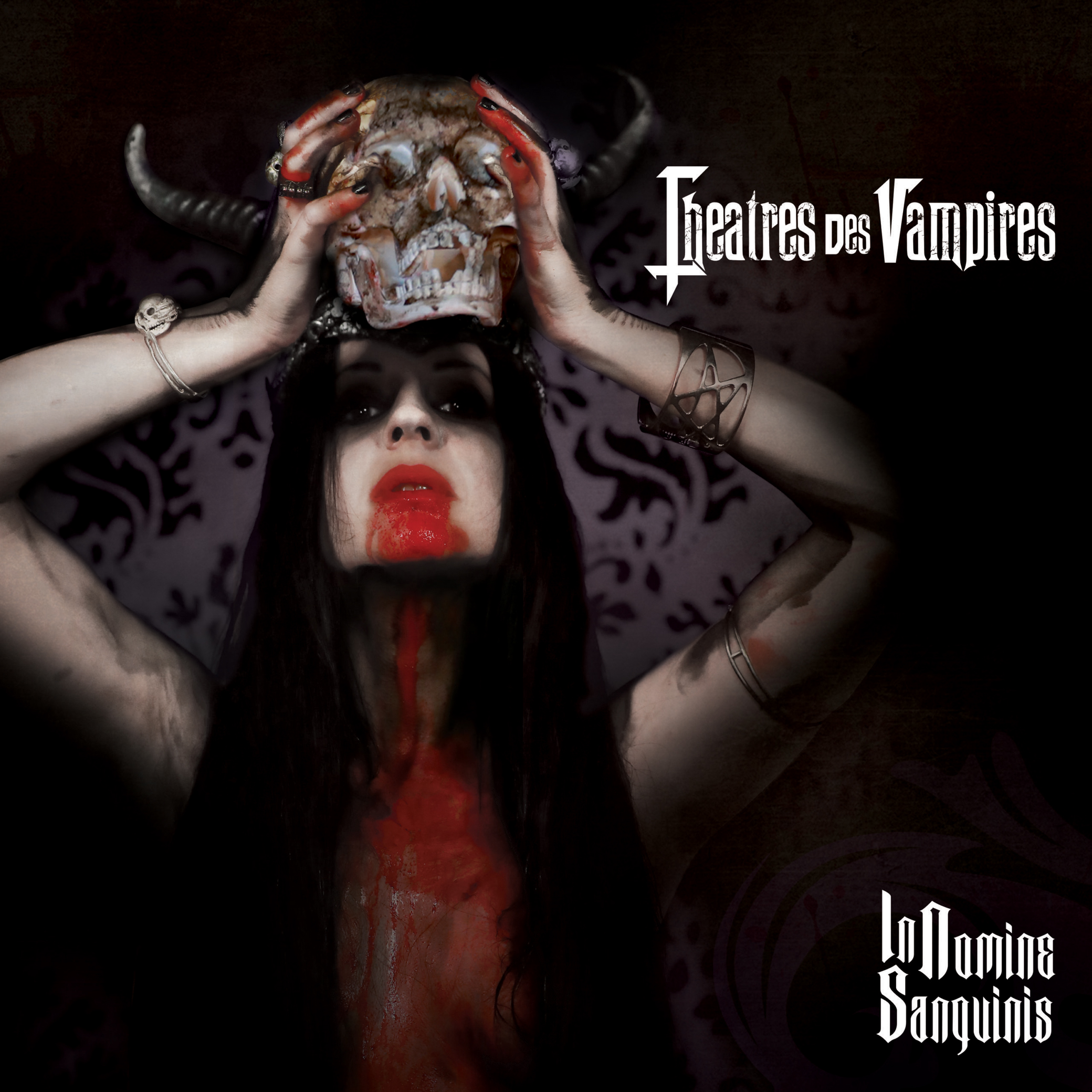 THEATRES DES VAMPIRES is a Roman gothic/horror metal band formed in 1994. In the beginning of their career, their sound was strongly influenced by symphonic black metal, but on their 1999 release “The Vampire Chronicles“ they had already begun to introduce a more gothic approach. Nowadays, THEATRES DES VAMPIRES include many different styles in their sound, ranging from classical music, opera, darkwave, deathrock, and gothic rock to several industrial subgenres. The band members, and especially front lady Sonya Scarlet, are deeply fascinated by vampires and anything connected to them. This theme is the linchpin of all their lyrics and also dominates their artwork and their flamboyant stage performances. But their last album, “Candyland“, released in 2016, surprisingly focused less on those vampiric and occult motifs. It was also noticeably more guitar-driven than the band’s previous offerings with Sonya on vocals. The three piece’s eleventh release, “In Nomine Sanguinis“, continues in a similar vein, but firmly re-establishes the focus on classical horror and vampire tales. Written and produced by Riccardo Studer (Time Collapse Recording Studio, Rome) in cooperation with Sonya, it offers ten dramatic compositions with punchy guitars, lush symphonic orchestrations, catchy vocal lines, and carefully interspersed electronic sounds. The intriguing artwork was created by Francesco Franz Benvenuti (photo) and Francesca Colella (graphics) and has a savage, occult quality to it that fits the vampiric theme perfectly. 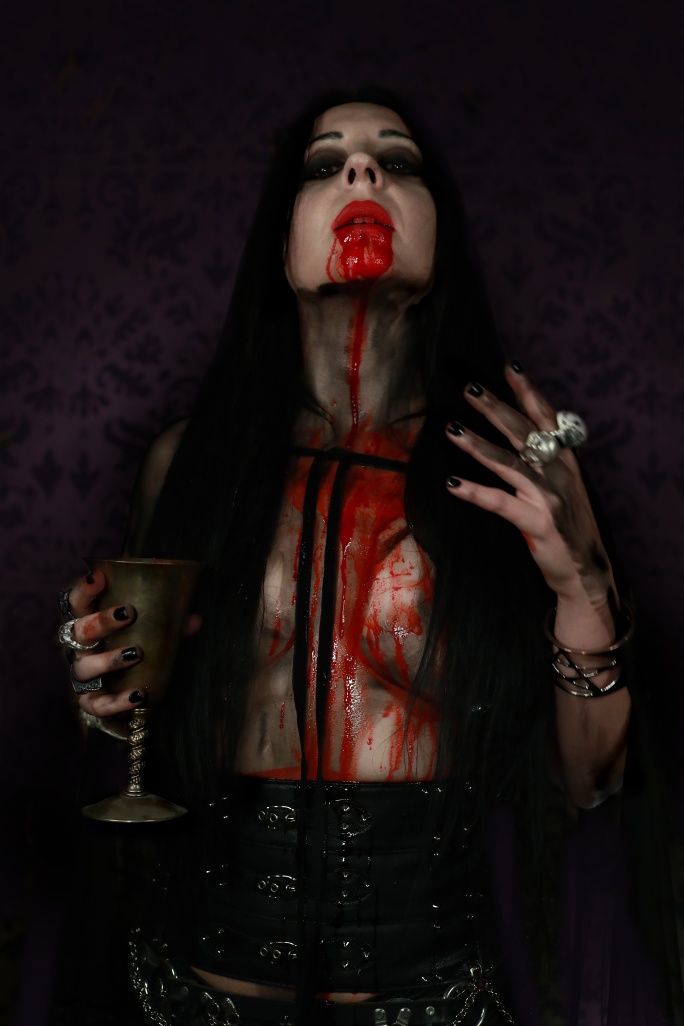 The opening track “Death In Venice“ starts off with a pumping electronic beat interlaced with the bombastic tones of a string orchestra and instantly makes you want to hit the dance floor in your favourite goth club. After about thirty seconds, the distorted guitars kick in and Sonya launches into the first enticing verse, taking you on a bloody journey into the heart of Venice. A young woman is insidiously murdered by her lover, who tries to secretly dispose of the body in the opaque waters of the lagoon: “Venice, lover and deceiver / She comes from the sea in the moonlight / Her corpse in the deep black water / She floats down into the waves”. But the treacherous murderer is out of luck: His lover returns as an undead creature and starts to haunt him! “She awakes from the oblivion / Into the blue of the lagoon / Laughing loud at him”. The chorus is outrageously catchy and makes you want to bob along to the beat. The addition of the sounds of a harpsichord to the opulent string sounds not only gives the track a baroque quality, but also helps bring the grand palaces of Venice, with their glittering chandeliers and masked ball extravaganzas, to life. In the end, the victim triumphs over her abuser: defiantly she cries: “You can’t kill me / You can’t own me / I’m Venice” – she is the victress and becomes the unholy personification of Venice herself. To the sound of impish laughter and upbeat orchestral sounds, the song fades out at just over four minutes. A brilliant track!

One of the next tracks is “Christina“, to which THEATRES DES VAMPIRES have just released an artful video. According to Sonya, some of the songs have roots in decadent romantic literature, and “Christina“ is one of them: the main character was taken from the novel “For The Blood Is The Life” (1880) by American writer Francis Marion Crawford. She is a tormented vampire that appears every night in the moonlight. “I imagined her dancing on her grave with sensual and appalling movements and the dark colours of the video really want to recreate this vampiric atmosphere”, states Sonya. The song has a groovy pace and is accompanied by more lavish orchestration. Sonya’s vocals are by turns yearning and lascivious, like Christina’s dance for her lover. Emphatically she intones in the catchy chorus: “Dancing on the grave / Dancing for her lost love / Craving for your pain / And rising from the cold frost”. A passionate guitar solo at 2:46 breaks up the straightforward structure in an interesting way.

The second song on the album that is thematically rooted in decadent romantic literature is “The Bride Of Corinth“, based on a poem with the same name by German poet Johann Wolfgang von Goethe (1797). It is a tale of two families who promise to marry off their mutual children — the son from Athens and the daughter from Corinth — when they are fully grown. When the son of the Athenian, who still adheres to the old faith, comes to Corinth as a young man, he is well received in the house of his father’s friend. He is lying down to sleep when the daughter of the house enters his room. She is seduced by the son into a hot night of love. The mother of the house catches the young people and it turns out that the girl is the very daughter who was promised to the young man. But by converting to Christianity, the mother has overruled this and committed the daughter to a life of chastity, at which she died of grief. Now the young woman has returned as a vampire and her lover will not survive the encounter with her. They will be united in death — a fittingly gothic theme for THEATRES DES VAMPIRES. The song starts off with a playful melody that sounds like it comes right off a music box. Then punchy guitars kick in and the track quickly becomes one of the heaviest of the whole album. At around 30 seconds in, Sonya launches into the first verse. From the perspective of the bride, she breathes innocently, and at the same time, seductively: “And I’m here to claim what now should be mine / … / But I have no heart and my skin is cold / I told you three times stay away from me!” Sonya’s vocals are occasionally electronically distorted and sound more like defiant screams than suggestive chants. The chorus is once again very catchy and makes you want to sing along and bang your head to the rumbling riffs: “You desire my kiss and my skin you crave / In this unholy reign I’ll give you / Tears and pain / I’ll give you my love / I’ll give you my grave”. “The Bride Of Corinth“ is undoubtedly one of the most guitar-driven and fun songs on “In Nomine Sanguinis“. 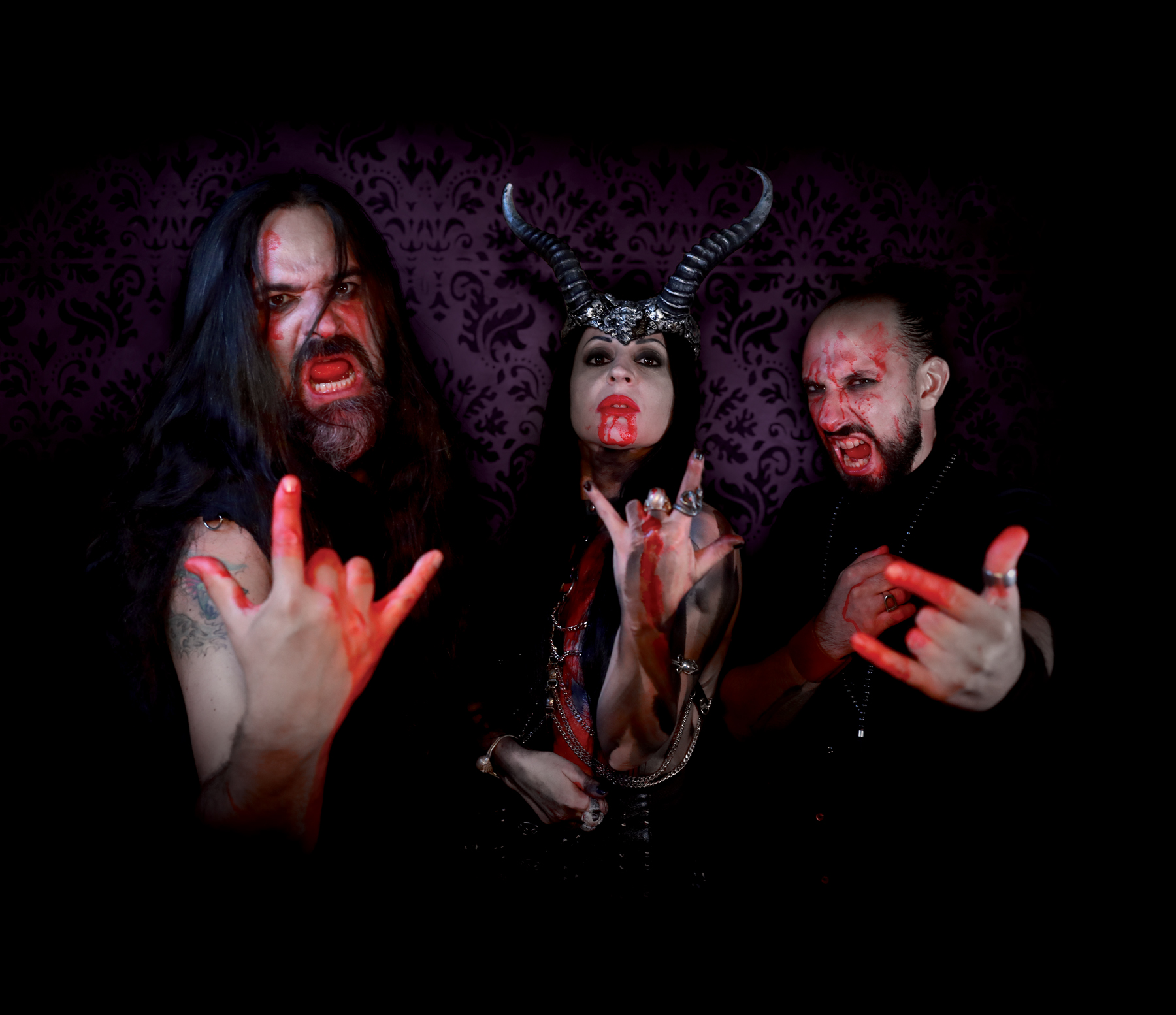 Next up is “Lady Bathory“, an ode to one of history’s most notorious female serial killers. The Hungarian countess Elizabeth Báthory de Ecsed and four of her servants supposedly tortured and killed hundreds of girls and women between 1590 and 1610. According to legend, the countess bathed in the blood of virgins to retain her youth and might have been one of the historical figures that inspired Bram Stoker‘s “Dracula” (1897). The track kicks off with dramatic orchestration and droning guitars that come together in an unholy melody. Sonya forcefully launches into the first verse of Lady Bathory’s manifesto, almost spitting: “I believe in the lust of blood / Eternal beauty, eternal love / My gloomy reign has no god / After the midnight toll / I’m out of control”. The deliciously poppy yet dark chorus has hit potential and stays in your mind. When Sonya rapturously sings, “Gotta demon inside my eyes / I’m the Queen of the night / I’m the sinner, the devil, I’m the witch / Your blood is on my cold lips”, you, the listener, start to side with the evil countess, even when she, the singer, fully in character, manically screeches: “I’m the black countess / The bloody Bathory”. “Lady Bathory“, with its sinister atmosphere and spellbinding groove, is most definitely one of my favourite songs on the record.

Also quite intoxicating are the title track “In Nomine Sanguinis“ (that contains a beautiful spoken word passage in Italian by Sonya) and the grand finale “Till The Last Drop Of Blood“. Both captivate with epic choral arrangements and bombastic orchestrations. Especially in the final track, THEATRES DES VAMPIRES play to all their strengths and deliver a carefully crafted horror-metal-hymn full of drama, seductive vocals, classical grandeur and heavy guitars.

The press text for the album stylises “In Nomine Sanguinis“ as the quintessential modern vampiric manifesto. Only time (and the fans) can decide whether it will be. In any case, it is an imaginative gothic/horror metal album with a slightly electronic touch that will certainly appeal to anyone with a love for sinister tales and dramatic, orchestra-based compositions. Henceforth, THEATRES DES VAMPIRES are undoubtedly in the fight with Deathless Legacy for the Italian horror metal crown.