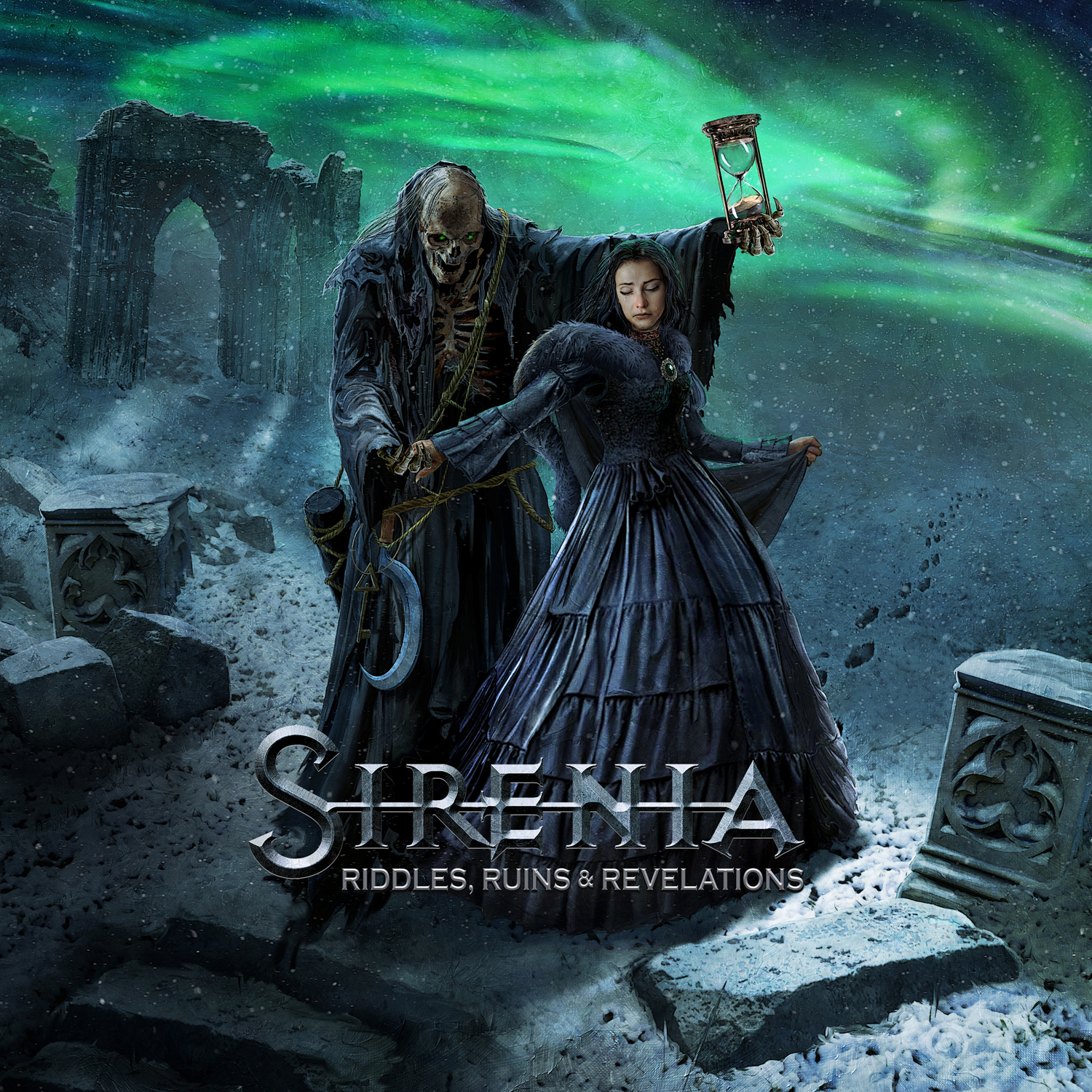 Norwegian symphonic metal heavyweights SIRENIA are back with their tenth studio album released this coming 12th February via Napalm Records. Compared to their previous album ‘Arcane Astral Aeons’ (2018), SIRENIA are bringing a darker, more gothic and at times industrial sound that endears as much as it enthralls. This is ‘Riddles, Ruins & Revelations.’

Recorded at Audio Avenue Studios in Stavanger, Norway, and mixed and mastered by Morten Veland himself, it takes about 2.3 seconds to notice that SIRENIA is upping the ante on the electronic elements as the first track ‘Addiction No.1‘ opens. Heavy beats supplied by the now permanent drummer Michael Brush kick in as the lead vocalist, French operatic mezzo-soprano Emmanuelle Zoldan makes her first entrance. This track slowly escalates the tension over a catchy chorus hook, as Emmanuelle sings about an unnamed desire. Breaks featuring heavy guitars and a steady beat are broken up by a guitar wail at 3:06 that defines desire itself. It’s a strong opening track for the album, reconfirming SIRENIA’s status as gothic symphonic metal legends.

The second track of the album, ‘Towards An Early Grave‘, feels like classic SIRENIA. It starts off with the symphonic metal staple of a Gregorian-like chorus chant in the intro, blossoming into operatic vocals which literally gave me goosebumps. When Emmanuelle Zoldan sings “You are the light, the pale dim light” it just starts to hit me where all good music should. It feels more emotional and heavy hitting than the opener and brings me all the good things that gothic symphonic metal should. Swirly guitar solos, some grunty growling and soft whispers combining to reach out to me like a sonic hand gripping my heart. This is upped in the beauty of the outro that focusses on Emmanuelle’s voice, stripping back the instrumentation to really make sure my heart is in a vice grip. This is my favourite track on the album. 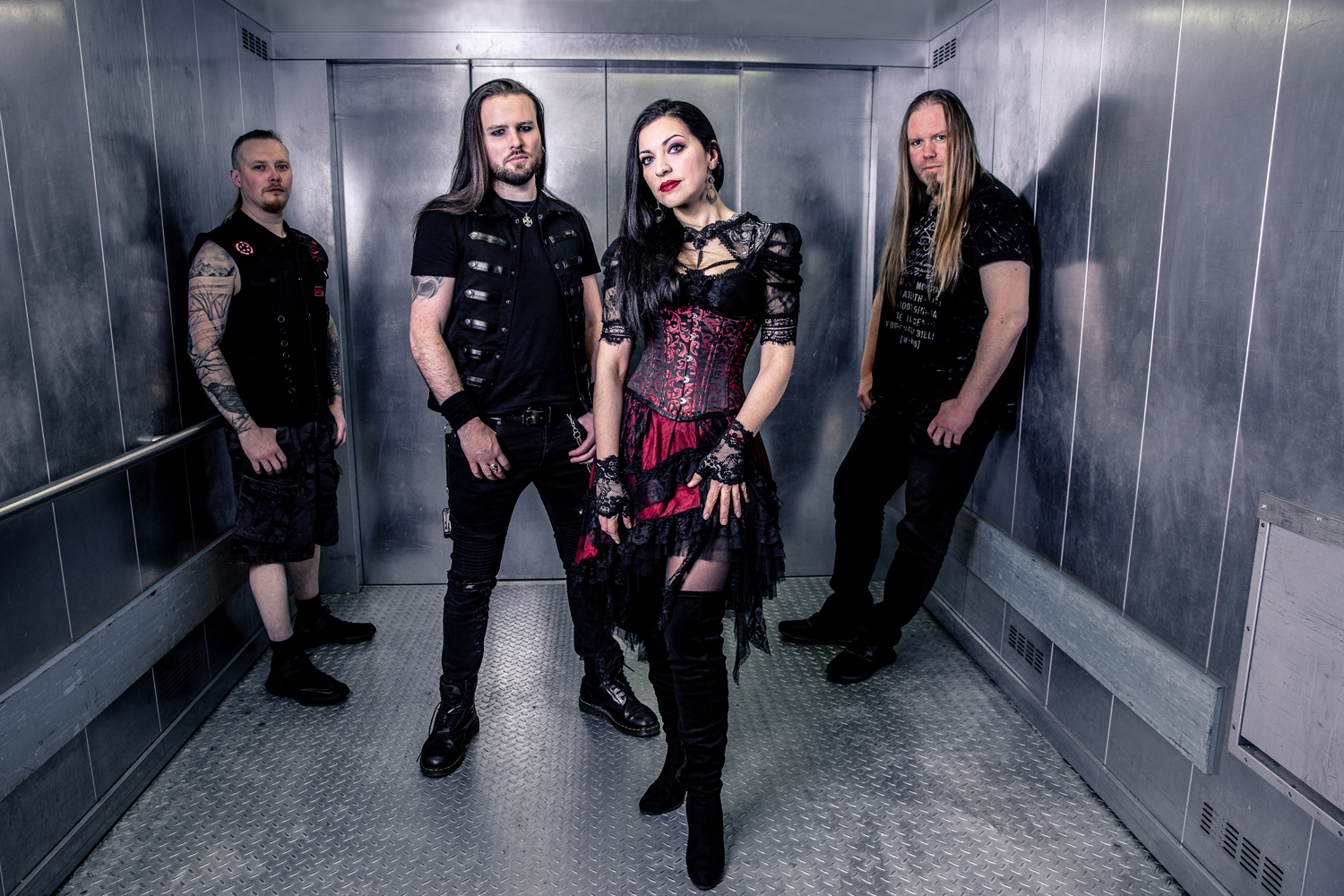 ‘Into Infinity‘, the third track on the album, starts with an industrial sounding synth melody backed by a theremin that gives me shades of Rammstein, combined with perhaps some influence from fellow Norwegians, gothic space industrial band The Kovenant. The lyrics are the fun kind of morbid that can be expected from Norwegians, suffering from endless winters and an ironic detachment from the arduous task that is living. The industrial elements in this track creates such a whirling dervish of energy that it in effect hides the lyrical yearning for death. This is what I love about SIRENIA. Hints at Chris De Burgh’s ‘Don’t Pay The Ferryman‘ never hurts either. The backing theremin and the pulsing drums are perfect accompaniments, but this song shines lyrically the most for me. Mastermind, multi-instrumentalist and band leader Morten Veland hits it out of the park, all the way into the northern lights on this track.

An unknown sample and more Gregorian chants kick us into the next track, ‘Passing Seasons‘. This vocal melody reminds me a little bit of the nineties for some reason, and I guess the nineties is back in a big way, not only in fashion, but music now too. I can’t pick which nineties song, but it does sound nineties somehow. The good part of the nineties. Is Morten Veland the “Fresh Prince Of Symphonic Metal’”? More theremin adds to the spookiness as pared back instrumentation let the vocals shine during the verses. The chorus is heavy hitting and the background operatic vocals are singalong as well, which makes this track one Norwegian kroner more lyrically hopeful than ‘Into Infinity’. Emmanuelle’s performance is incredible and I love the vocal delay leading into the guitar & drum solo bridge around 3:20. The electronic elements match up perfectly and offer a playfulness to SIRENIA that feels authentic. 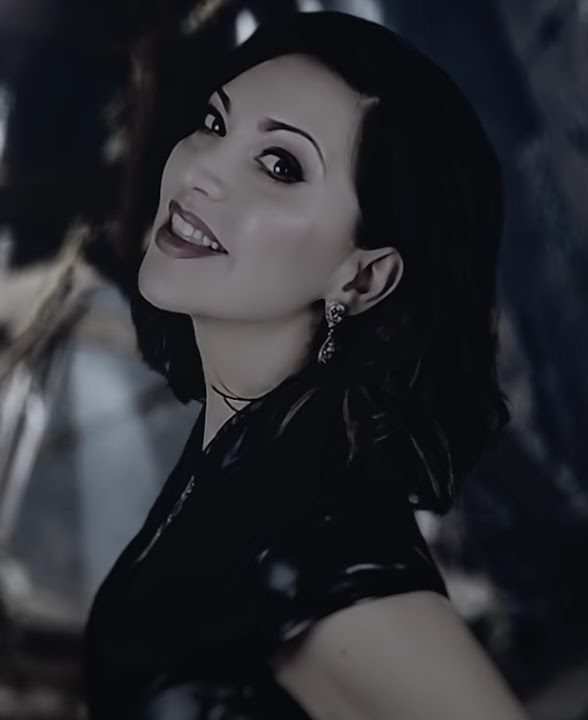 ‘We Come To Ruins‘ starts off whispering and industrial, but quickly shifts its pace and hits heavy and fast, returning to a more traditional metal sound. The growly sound of Morten Veland‘s vocals reassures me that this is a return to hopelessness, and I am relieved. Don’t ask me why, maybe it’s the toxic positivity that we’ve all had to endure during this ‘situation’ that is the pandemic, but SIRENIA’s despair is a comforting reflection. I literally bust out into joyful laughter at the lyrics. What is wrong with me, or what is right with SIRENIA? There is a bridge that is all synths and atmosphere that reminds me that this is a new SIRENIA. They are definitely leaning much more into industrial, the section at minute 3:00 even reminding me a little bit of ‘The Great Below‘ by Nine Inch Nails. A technical guitar solo bridges the gap between the industrial bridge and the hectic double kick drums that make up the majority of ‘We Come To Ruins‘. Once again, the outro lets the instrumentation fall out to focus on Emmanuelle’s vocals, creating an epically beautiful moment that makes me want to return to this track over and over again.

Speaking of Nine Inch Nails, the next track is called ‘Downwards Spiral‘, however the French lyrics make this track more ‘La Mer‘ than ‘March Of The Pigs‘. It does open up quite heavy, before dropping out into a subdued verse where French whispering underpins the main vocals, eventually building up to a heavier chorus featuring long-time friend Joakim Næss. This track has a certain nostalgia to it, an odd sense of regret, like a problem from the past I’d forgotten about, remembering one day in a sort of trance. The guitar solo kicks in towards the end and I’m brought back into the present and as the chorus outro fades out, a clean guitar steps up in its place, I realise, there was no fixing that past problem. This track has me feeling unsteady, I’m not sure if that’s the purpose though.

Track seven, ‘Beneath The Midnight Sun‘ feels much steadier in its stance. It’s a return to the industrial metal of the earlier tracks that has made me so happy. More synth melodies, more guitar, more drums, more theremin. Head-banging melodies kick off and then Veland’s growling about faltering into oblivion is what I expect and what I want. The synth melody is especially good and I can foresee a thousand heads banging in unison to this absolute banger of a track. Some of the synth melodies are back to that upbeat contrast that works so well in ‘Into Infinity‘. Nils Courbaron also shines on lead guitar in a solo that suits the tone and mood of this song and the greater album. 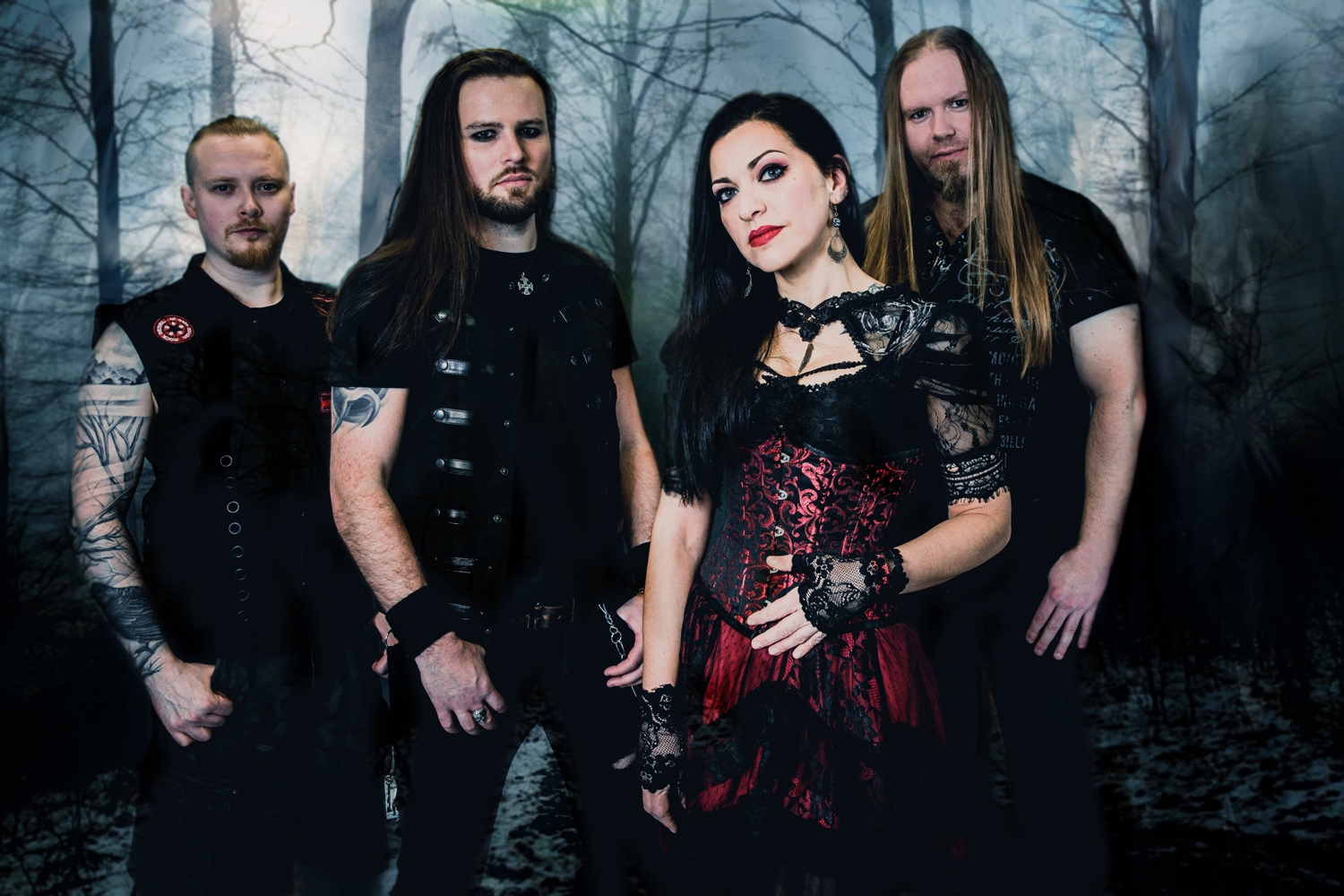 ‘The Timeless Waning‘ – okay the first twenty seconds reminds me so so much of the drums from Tears For Fears ‘Everybody Wants To Rule The World‘ – it’s another hint at nostalgia or perhaps a timelessness that SIRENIA were going for in this album. So far, I’ve heard Nine Inch Nails, The Kovenant, Rammstein, and now Tears For Fears. The fact these are the sounds I’m hearing makes me love this album even more. Anyhow, that reference ends after the first twenty seconds and then we have hard hitting drums by Michael Brush. Emmanuelle’s vocals come in sounding mysterious and like she knows something I should know. She sounds more powerful and commanding and the growling vocals complete with delay really compliment this track. There’s a certain “je ne sais quoi” about this track. It is confidently mysterious and the instrumentation backs it in a way that creates a magical atmosphere. It’s dark and heavy and perfectly put together in a way that feels strong, confident and mega-cool.

‘December Snow‘ starts off with another Rammstein-esque synth piano melody, before bringing in the blaring drums and guitar. It then softens up and the synth gets sparkly underneath Emmanuelle’s vocals. Is this a love song? Spooky theremin bridges the gap between verse and chorus. No, this isn’t a love song, or perhaps – more along the themes of the rest of the album – it’s a wintery ode to the eventual cold state of being. The chorus completely bangs. A synth dominated bridge leads into some heavy guitars, broken up by Emmanuelle’s mysterious French lyrics and closed out by some even prettier guitar. I can’t stress enough how cool the chorus is on this song.

‘This Curse Of Mine‘ possibly fails to deliver where a penultimate track should. It’s heavy yes, but compared to the innovation and atmosphere that so easily affected me for the most part on this album, this track sounds a little stock standard. It’s almost a battle track, marching drums underneath a sweeter sounding vocal performance sounds a little bit confusing to me. The four-piece are all technically on point, it’s the emotional impact that I’m missing on this track. I can’t pick if it’s the ‘ruin‘ or the ‘revelation‘, so then it feels like neither. For an album, I think having one or two songs miss that connection is an incredible feat.

The album ends with a bit of fun, a cover of French artist Desireless‘ late 80’s hit song ‘Voyage Voyage‘. It’s beautiful and very true to the original, with Michael Brush’s drums adding the most dramatic change to the late 80’s synth pop hit. I think the fact this song in particular keeps getting covered is a testament to the impact of Desireless, who is in fact still active. It’s a really fun way to end the album, and a very big side step from the main theme of courting death.

I guess that’s the riddle part of ‘Riddles, Ruins & Revelations‘, a time collapsing otherworldly descent through symphonic landscapes, an album full of lyrical yearnings for the great beyond and a new devastatingly awesome experience from SIRENIA.