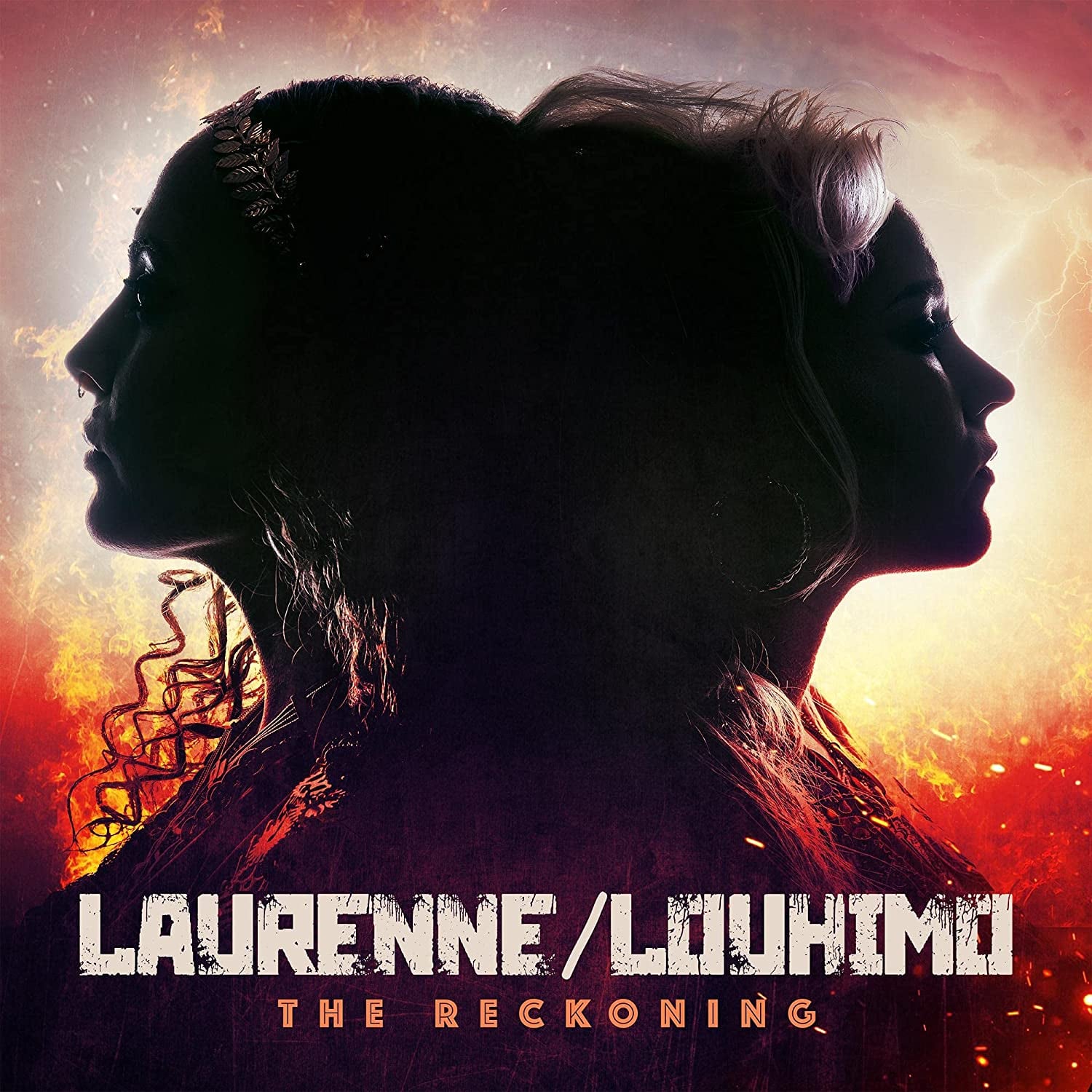 The pandemic brought many things to a halt in the music business. But it also gave rise to long-simmering project ideas that a whole lot of free time made possible.

Such is the case of “The Reckoning”, the duet album from power metal powerhouses and Tampere, Finland native daughters Netta Laurenne (Smackbound) and Noora Louhimo (Battle Beast). Its instrumental bedrock is built by Netta’s husband, Sonic Pump Studios founder and owner Nino Laurenne, on guitar and Sampo Haapaniemi on drums.

In the album bio, Noora calls Netta her “long lost soul sister”, and a more logical blending of two singers is hardly possible. In this nicely brief and restrained effort, with songs to the point and completely lacking in self-indulgence, the two stretch out and fully enjoy each other’s musical company, putting ego aside and letting themselves and each other shine over some top-notch power metal. The songs themselves are unabashedly feminist – and more broadly, actually, humanist – anthems. 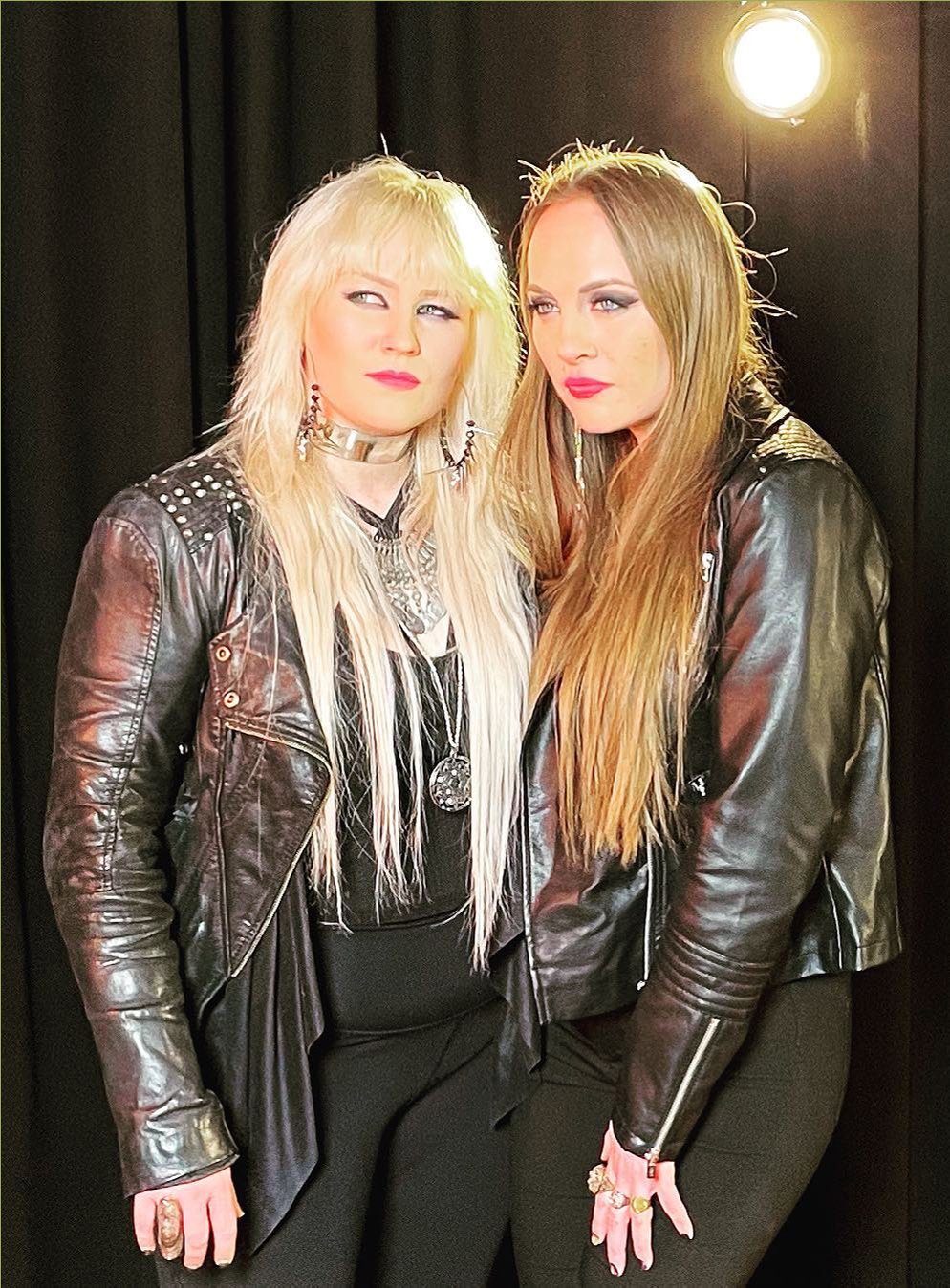 The most potent power metal swing is the basis of the opener, “Time To Kill The Night”, and the pattern of the two singers alternating on verses and melding in the chorus gets under way, Netta’s polish and Noora’s grit playing perfectly off one another. In fact, they are so perfectly paired that they are almost indistinguishable, two halves of a whole, but the embarrassment of riches is a wonderful thing. That chorus is just excellent sonically, the melody big and sweeping and bold and self-assured, full of swagger and strut. It may be a wee bit awkward in its wording, but the idea is clear – this is someone who has decided to rid themselves of negativity (“I will be living my life out of your shadow lines”, a clever way of referring to the shadows cast by critics, both external and internal), someone who has been “Holding on to promises too long / No more will I be listening how worthless I was born”. The title is a direct play, then, off the lines, “It’s time to call out for / The army of soldiers of light”, those being the positive thoughts, the self-esteem-building that will hold the negativity at bay.

The title track is acoustic and intimate at the start before the stomp starts in earnest in the second verse, and it boasts another stellar chorus. Here again is another urging toward self-care (“If you don’t care for yourself / They’re really going to break you”) and the warning “If you have no balls, you’re out of time”. The “reckoning” of the title seems to be life in general, “Closing in on you everywhere” and asking are you going to come to grips with it and deal or “Are you gonna stand and take the fall?”

“Tongue Of Dirt” starts and ends with a punchy riff undercut by a keyboard arrangement that adds texture and air. The verses are snarled, all minor-key threat and precise, sarcastic diction that drives the point home. It slows and eases before the prechorus and the transition into the chorus merges and melds the two parts effortlessly musically and lyrically. Said chorus has a brighter, more optimistic sound than the verses, making for an interesting contrast. This is another commentary to the naysayers, and I like the metaphor of the “tongue of dirt”, like all they can say is garbage and “hollow words”.

The undulating, stretchy guitar chords in the verses of “Striking Like A Thunder” really serve to symbolize the push and pull of emotions going on – the self-doubt vying with the defiance, the need to take chances. It tightens in the prechorus, like the decision’s been made, then the chorus, in a major-key modulation, bursts out in fearlessness and joy. The storm reference in the first verse symbolizes that upheaval or struggle is scary (“I 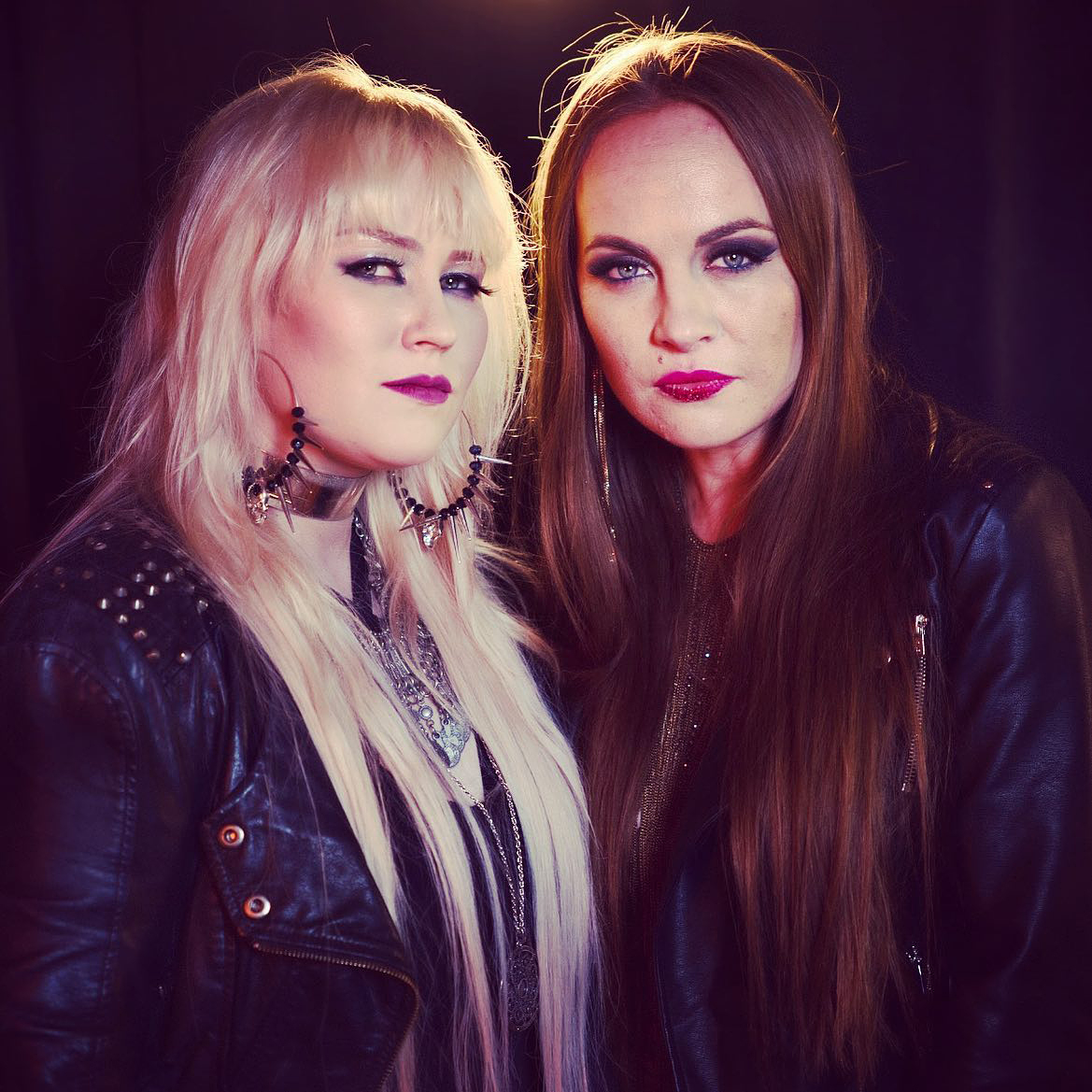 think it’s gonna rain later on / Maybe we should look for a shelter”), but it’s ultimately cleansing and freeing (“But what if all the water revives us? / Clearing out the past from our backs / Maybe we should let this storm guide us”). There’s a moment of quiet reflection in the final prechorus (“We should hold on to magic / There’s so much to be gained”) as if to give one final reminder to always seek positivity. And there’s that wonderful line that we can all relate to about taking necessary risks – “And I pay for all the times I felt too afraid / This time I won’t make the same mistakes again”.

High-end crashing drums and cymbals and a full-on trad metal blast separate “Bitch Fire”, the first single, from the power metal of the rest, as do the piercing shrieks of both women as they push the top end of their registers. Guitar solos here throughout are brief and minimal, letting the two singers really have their time and space. The chorus, and that phrase, serve to kind of reclaim the word, in a way – “bitch” is such a loaded word, positive and negative, a compliment and a curse. Those lines, “They burned us at the stake / We walked through the flames with no pain” and “Life belongs to those who burn with grace”, kind of hint at the cleansing nature of strife and turmoil. But the spoken bridge is a rhetorical question, almost saying we still have far to go (“We see woman against woman / And man against man / And we’re trying to understand / How in the hell did we let things get out of hand?”).

Based on the title alone, “Hurricane Love” is a breakup ballad, of course, that starts with piano and acoustic. Quiet in the verses and the first chorus, feelings are held in check before it breaks out in the second one. The two trading on verses really makes this track, Netta’s voice wistful, tender and beautifully mixed on the first and the chorus ; Noora’s with that signature tone and bit of deep resonance on the second. The song is fairly self-explanatory – the “hurricane love” is a nice metaphor for an overwhelming, almost destructive intensity – but my favorite line in all of this might be in the bridge: “When I found you I found happiness / For the first time in my life / Now I’m back to feeling loneliness / No matter whom with I kill time”. The wording is a little awkward, but you get the idea: the hollowness of using empty physicality to fill an emotional void. 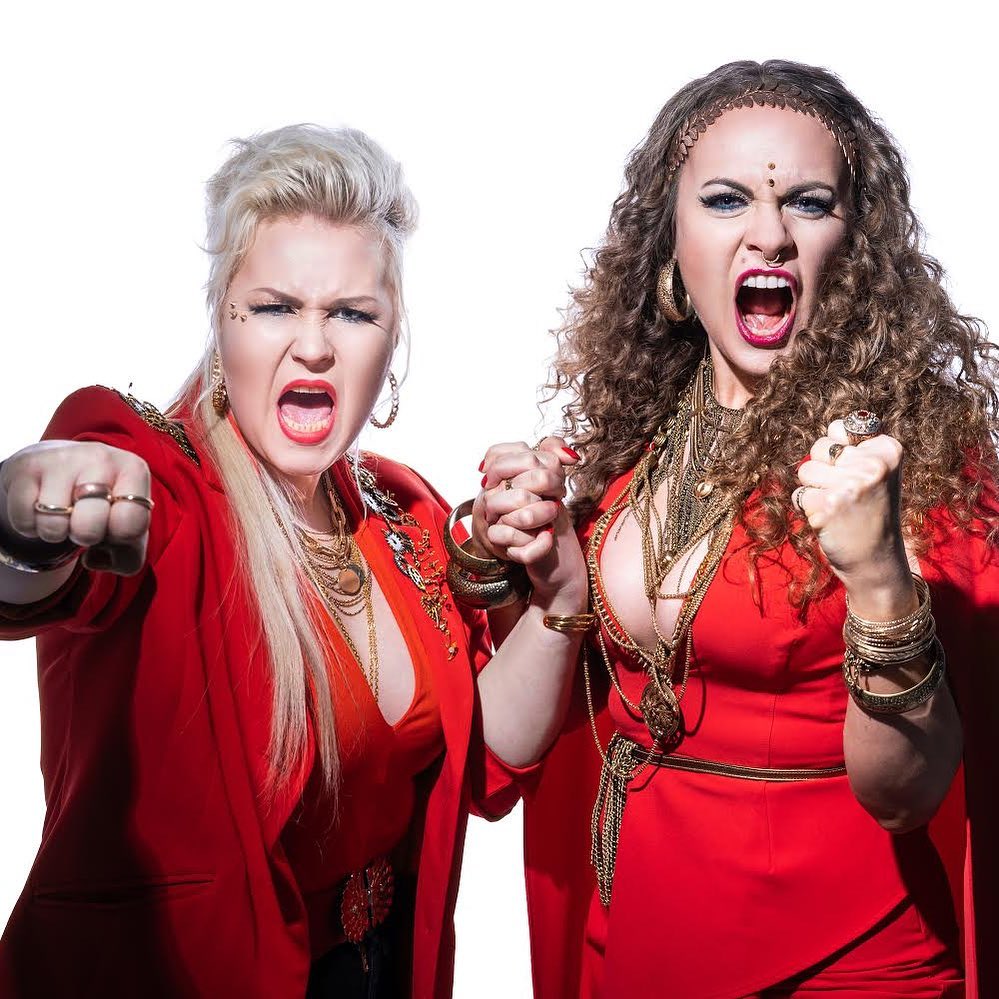 A tension-building beefy grind leads into a pleasing stomp in the chorus of “To The Wall” ; the prechorus slows and becomes pensive and thoughtful. This again is some great observation on what we all go through, and again, maybe we uniquely as women (“Look in the mirror and say you don’t feel it / You’re somehow stuck in yourself”, maybe a reference to body image ; “The words you hesitate kinda reveal it / You’ve been brought up believing what others tell” and “So many years were lost focused on pleasing / The ones who don’t understand”, that is, how much we judge and compare ourselves to others). The prechorus – “We’ve been fooled in believing we’re somehow wrong / I’m overruling that notion because we are strong” – is so effective because that word “wrong” becomes so loaded in this context. It could mean anything, from being women to being metal fans to being women in metal. The second verse, too, is really powerful: “After you recognize all of the shackles / You have been dragging along / Feeling betrayed you may get up your hackles / But you gotta hold on to the sense of right and wrong”, as if to say coming to this realization might make you angry, but that’s no reason to lash out in kind.

“Viper’s Kiss” is midtempo, bordering on ballad territory but not quite getting there – a signature guitar melody starts it and is then reprised at the very end. It’s obviously directed toward someone toxic and there’s nice lyric/thematic continuity between lines in the verses (“I never knew your teeth had such sharpness” and “These bitemarks in my heart made me jaded”) and the chorus (with its result, “When the poison reaches into my veins”). 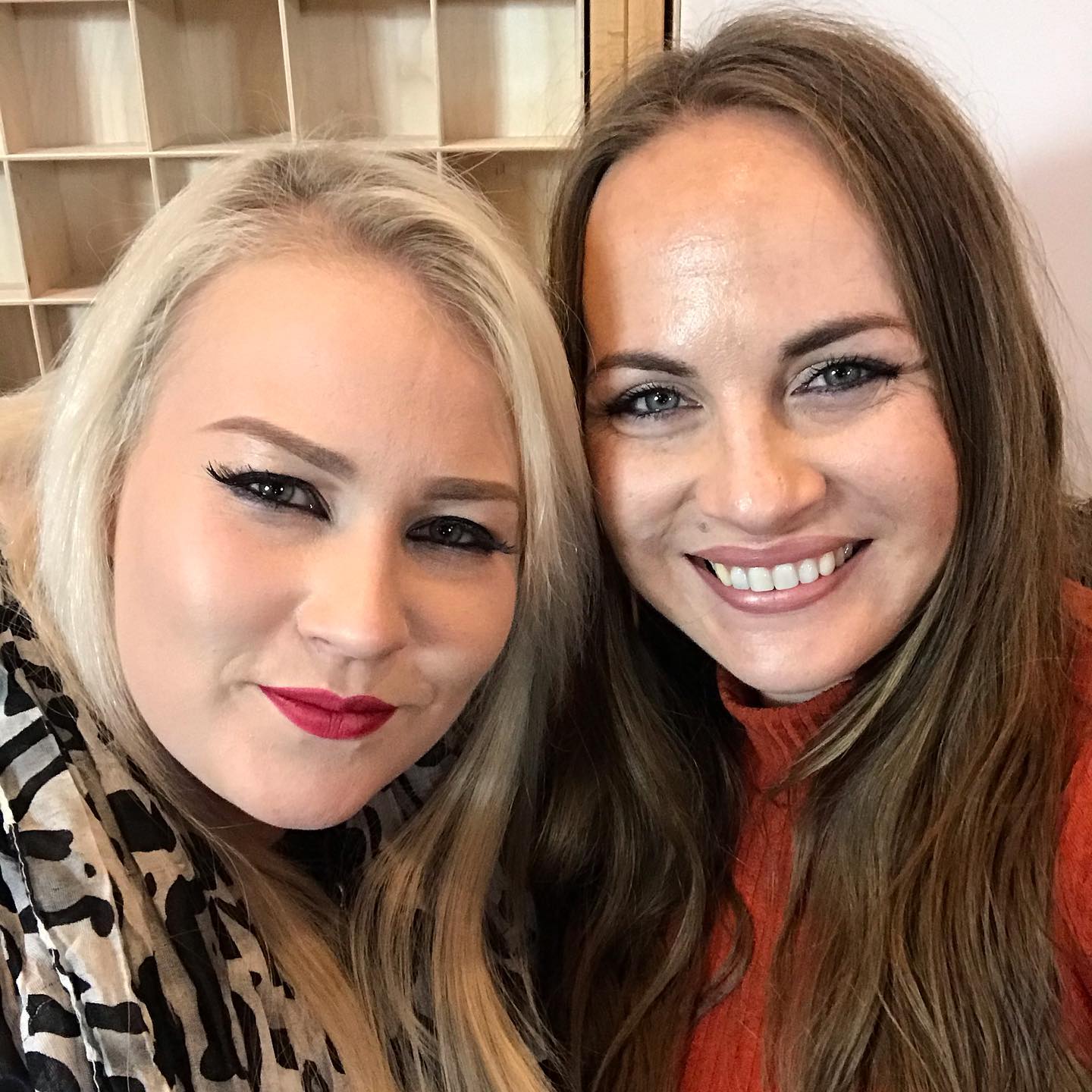 “Walk Through Fire” is back to pure power metal with a standout keyboard part and dramatic drumming. As the album goes on, it becomes easier to distinguish the singers ; Netta for her shimmering higher end, Noora for her buttery rich midrange. The chorus’ message is twofold, asking, ”How good can any of us be if we just fail to empathize” (what kind of people are we if we can’t understand what others go through?) and “Our worth is measured by how well we walk through fire” (that is, how well we stand up to challenges and survive setbacks). The verses set that up by giving examples and making us examine ourselves: “Rule of thumb is not to surrender … Time to recognize the offender”, that is, ourselves ; and “Situations easily set afire / Insecurities play the key role / Everybody calling the other liar”, that is, see how we’re all guilty of this. 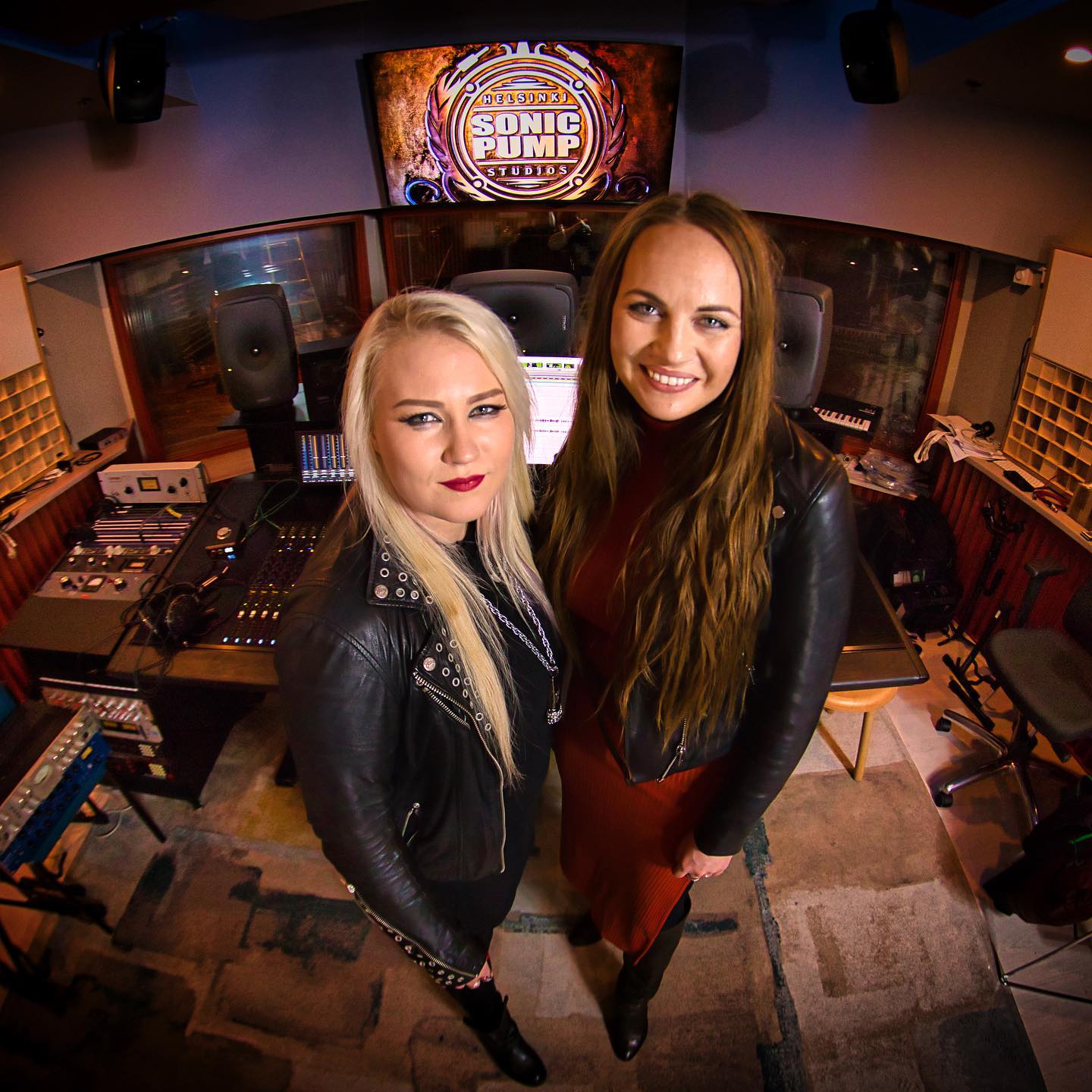 “Dancers Of Truth”, the magnificent closer and the longest track at over 7 minutes, begins with a hypnotic, repetitive sitar/guitar melody that segues into the booming, Eastern-tinged riff stomp laced with orchestration that returns after each chorus, before each verse, and at the close. Another tiny brush of sitar at the end brings it wonderfully full circle ; the musical continuity here is so satisfying. The verses are lush, seductive little slow burns, the first hinting at unfaithful men (“They are deceiving / Not worth believing in” and “He was yet one of those / Wanting to break me / Trying to steal all my power away”), the second at perhaps ways to guard oneself against them (“Only way to get hurt is to / Let ourselves astray” and “Never do depreciate yourself … We must remember what we’re made of”). The third urges empowerment (“Enemies are made of fears .. Only if we kill the coward/ Terrified of self / Can we become one”). The spectacular chorus raises every last one of the hairs on your arms with its gorgeously modulated melody (and terrific overdubbing) in a demanding that “We gotta do all the things they said we cannot do” and “Everything they told us not to do”. And the bridge urges that we “sisters” “Got to shield what’s underneath” and that “We need the freedom to / Stop self destruction / Stop playing their games”, stirringly pointing out that “We are in charge of what’s making us slaves!” – Damn right! What a fabulous ending this is.

The sisters Laurenne and Louhimo did this project for themselves. But they also did it for all us sisters who are doing it for ourselves – and for each other. We owe them a debt of gratitude.