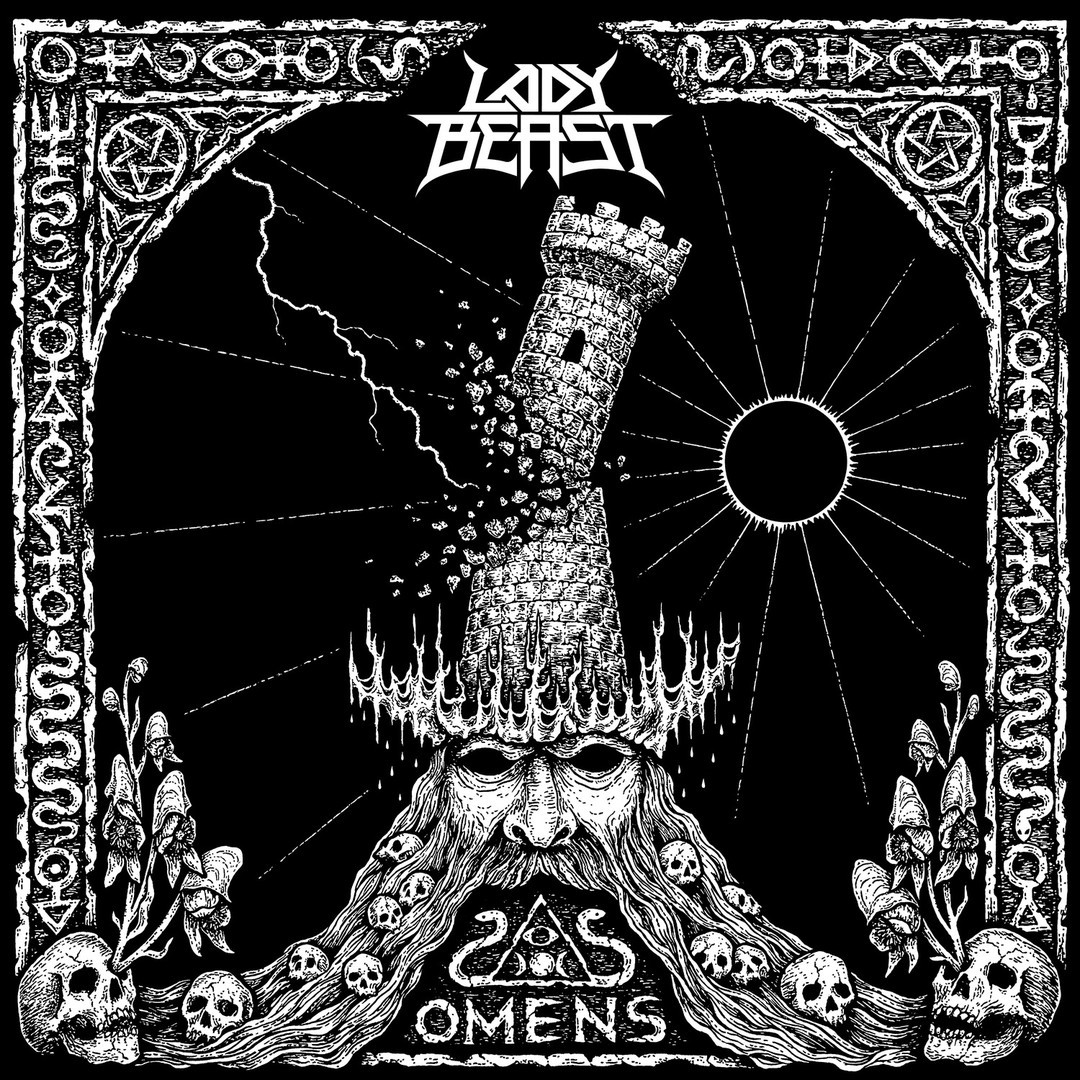 We all have our history with metal, things we can point to and say: “Yes, that’s where it started”. For me, growing up less than two hours east of Pittsburgh, it was WDVE, the radio station I managed to pick up — mostly, depending on the weather, depending on if my antenna was positioned exactly right — on my crappy bedroom radio.

WDVE introduced me to Judas Priest, Iron Maiden, Def Leppard, and a ton of others, including a young band from Seattle who would become a long-time obsession — Queensryche.

So when I saw that LADY BEAST — singer Deborah Levine, guitarists Andy Ramage and Christopher Tritschler, bassist Amy Bianco, and drummer Adam Ramage — was from the Steel City, it brought back a slew of memories and I knew I had to check out their sixth album, the EP “Omens”. 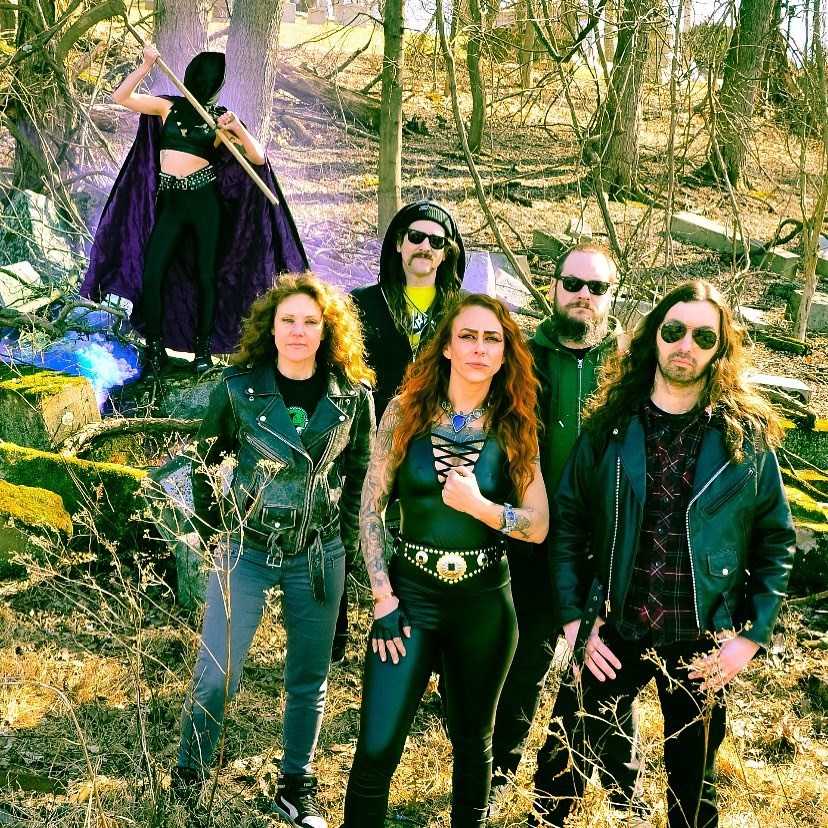 Their influences (Judas Priest, Mercyful Fate, etc.) are very apparent in “The Poisoned Path”, with its crisp, brisk chug and sinister main riff — it’s short and sweet and to the point, as all good traditional metal should be. It’s a tale of women’s magic, of witchcraft, and Deborah has definitely done her songwriting homework on the subject. This woman searches for flowers “singing to the moon” and finds “monkshood has a glow” (that being a very poisonous plant also known as “Women’s bane” and the “Queen of poisons”), “Datura down below…” (also poisonous and a hallucinogen) and, most poetically, “in the wind Belladonna blows! / I grab her by the root, and twist her milk into my mouth” (Belladonna is “one of the most toxic plants known” and is related to Monkshood). The two were said to be used by witches in “flying ointment”, not literally to fly, of course, but in a mystic or shamanistic way, and she notes this: “When poison’s power strikes, if you give in, you take flight!”. The trippy prechorus is a conversation, “Oh sly demon! / Have you tricked me to my death?” our heroine asks ; “Nooo, silly child… / I gave you magic’s breath!”, our demon counters. And the “chorus” “Poison in your brain, in your eyes, in your veins!” is another reference to Belladonna in that women onced used it to make their eyes appear bright. After the solo, the repeated lines “A path without an end, where time and space can bend… / You’re on the poisoned path!” are repeated like a hypnotic, drug-induced mantra.

The mix in “Reaper” is well balanced — nothing overpowers Deborah’s voice, which has a rich, thick midrange, a potent vibrato, and an appealing snarly throatiness. She’s not left behind nor does she dominate. Staccato, choppy verses that say that death is stalking you because of “your darkness” that “leaves auras around you!” and that your “Delusions of life / (are) built on fear and confusion” and that ‘Ignorance and greed has now caused your decay!”, juxtapose with the legato chorus that warns “The face of Death you can’t escape!” The end is a brief verse that sums things up nicely, “A warning has been issued, the rest is now on you / Judgements disposed now to hell you must go!” and she winds it up with an evil foreboding chuckle.

A cascading main riff, from high to low, is the basis of “Blood For Blood”, as are Adam’s pummeling, urgent drums. We have a story here with distinct parts: part one introduces a lone survivor from a brutal attack (“All were killed, the village torched in flames”) by an unknown assailant (“No one around, no one to blame”). The prechorus is him swearing vengeance (“An honor to be left to avenge my dead”). Part two is him delivering on his promise after he’s tracked them down (“…tonight like a river their blood will run”) and acknowledging the personal 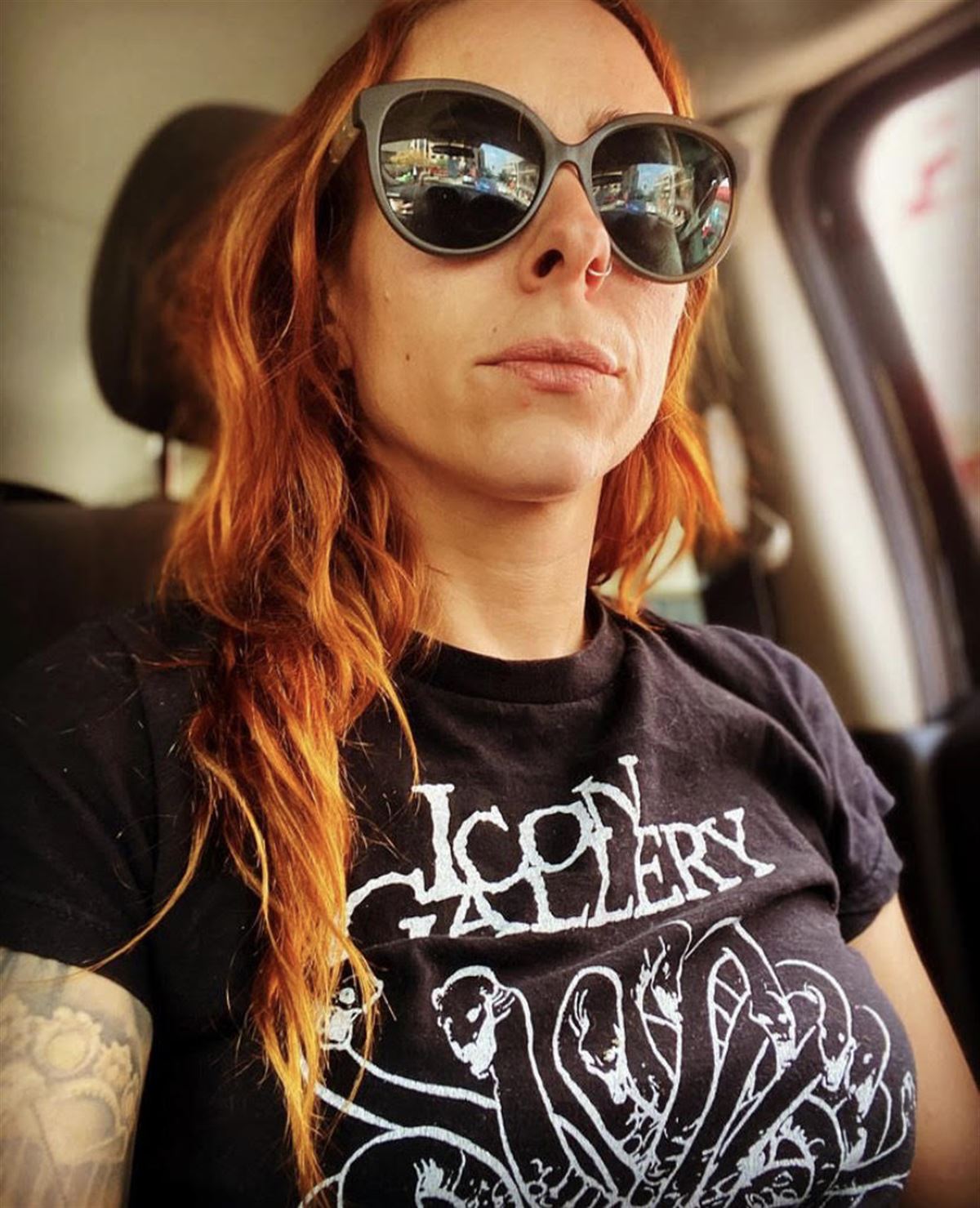 danger (“It’s a risk, this I know going in for the attack alone”). The almost punk, messy chorus, while catchy, could be delineated a bit more carefully between its cries of “Blood for blood” and its asides (“is my vengeance” and “…as I bring your death”), because they get lost and it takes a moment to figure out the rhythm, so it loses a little of its impact. The spoken/sung end wraps up the story with a commentary — don’t judge me, our character says (“And the story will be told of this bloody revenge / And let all who detest it, meet the same end” …“I can’t undo the things I have done”) and the main riff and drum pattern blast it to an end.

Rainbow covers seem to be popular lately — Burning Witches have done “Holy Diver” ; the doom band Sorcerer just did “Gates Of Babylon” — so LADY BEAST decide to tackle “Kill The King” here. I listened to the original for a basis of comparison — the signature riff is a bit sluggish on this version, maybe that’s on purpose to give it their own spin, and the solo section seems a bit shorter too. It’s an interesting perspective hearing it sung by a woman because it almost becomes first-person (“The queen’s about to kill”) rather than observational. Deborah enunciates a bit more clearly in the “I’m no pawn, so be gone” lines and she matches the immortal Dio vibrato for vibrato. It’s a respectful cover that has enough switch-up to make it satisfying. 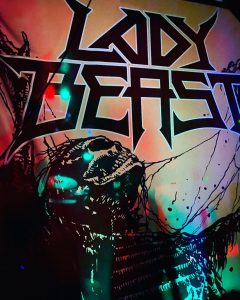 “The Fool’s Journey” starts with an insistent multi-part riff, played repeatedly, that evolves into something else — all the while accompanied by the drum pattern — before it switches back, a cool touch that keeps you on your toes. The first solo is a variation of that main riff and you can still hear traces of it in the second, longer solo. A brief bass breakdown from Amy before the first verse is another aural treat. This is rather thought-provoking observation about accepting change and “Break(ing) from the chains of old structured ways!” about “learning the power of choice”, about finding our “inner voice” and about learning balance, with nods to ancient Greece (“…the Hierophant helps us break out! / And find that inner voice”, a Hierophant being “an interpreter of sacred mysteries and arcane principles”) and hermeticism (“Temperance will teach us As Above So Below!”). It also points out that we’re “Gaining fortunes through fate and foresight”, that is, by luck rather than perhaps our own brilliance, an intriguing idea with which to leave listeners.

Had they been around in my formative years — which of course were well before their 2009 inception — LADY BEAST would have undoubtedly revealed to a little baby girl metalhead not only what was possible for a woman, but also to what was possible not that far from home. Horns up to them for that.