CLAYMOREAN – EULOGY FOR THE GODS 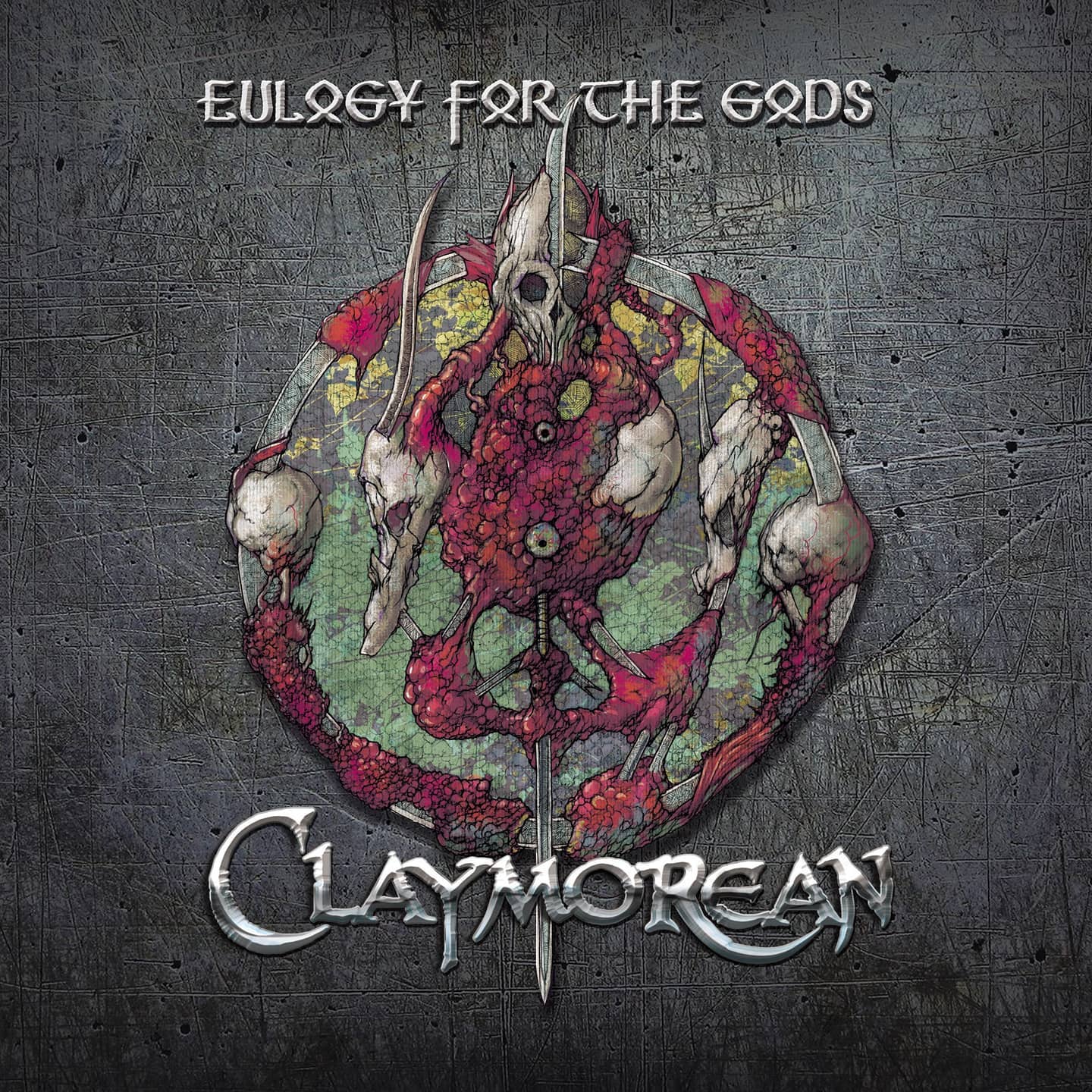 This latest resurgence of traditional heavy metal knows no national borders – and it’s taken up permanent residence in Serbia with CLAYMOREAN.

After singer Dejana Garčević, her husband and guitarist/singer Vladimir Garčević, guitarist Uros Kovacevic, bassist (and Vlad’s brother) Goran Garčević and drummer Marko Novakovic teased it with last year’s “Demo 2020” (which featured the first two songs), their third effort “Eulogy For The Gods” is at last out in full. It follows “Sounds From A Dying World” in 2017 and “Unbroken” in 2015 ; when they were known as Claymore they released “The First Dawn Of Sorrow” in 2003 and “Lament Of Victory” in 2013. Their Facebook page says their lyrics are based on “fantasy and horror fiction, although some are derived from historic events… religion, philosophy, life, and death” and that their style is a blend of traditional and power metal with “epic and doom metal influences.” 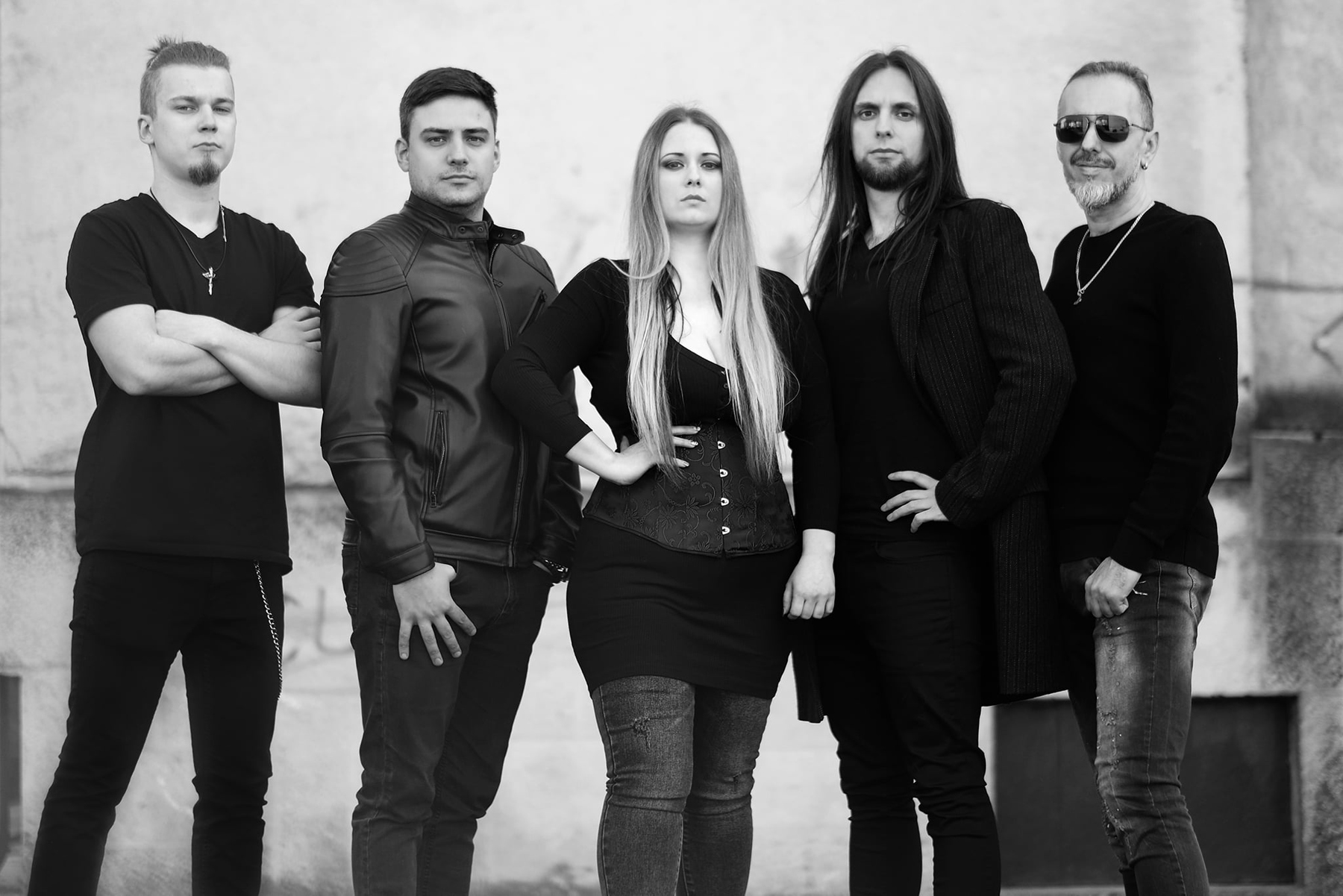 It’s indeed a traditional metal vibe that kicks things off in “Hunter Of The Damned” with its bright, extremely clean riffing ; when Marko’s drums kick in, it gives it a percolating propulsion. Dejana has a raw, phlegmy rasp and a potent upper register – she starts the track with more of a crooning feel, but midway through the second verse, she modulates up and keeps that going into the second chorus. Two guitar solos are connected by her wail into a third quick solo section before the final chorus ; the vocal overdubbing done there is effective in conveying the mood. This is the “horror fiction” aspect they mentioned, and while it’s not a story per se, it’s got imagery that leans in that direction, especially in the catchy chorus (“Summon the legions of hell / Raising the dead from the graves”) and in the second verse (“I follow their leader / A sinister gaze in his eyes… Blade meets the bone / This is the end of his line”). Theirs is concise songwriting technically, if not terribly complex thematically. 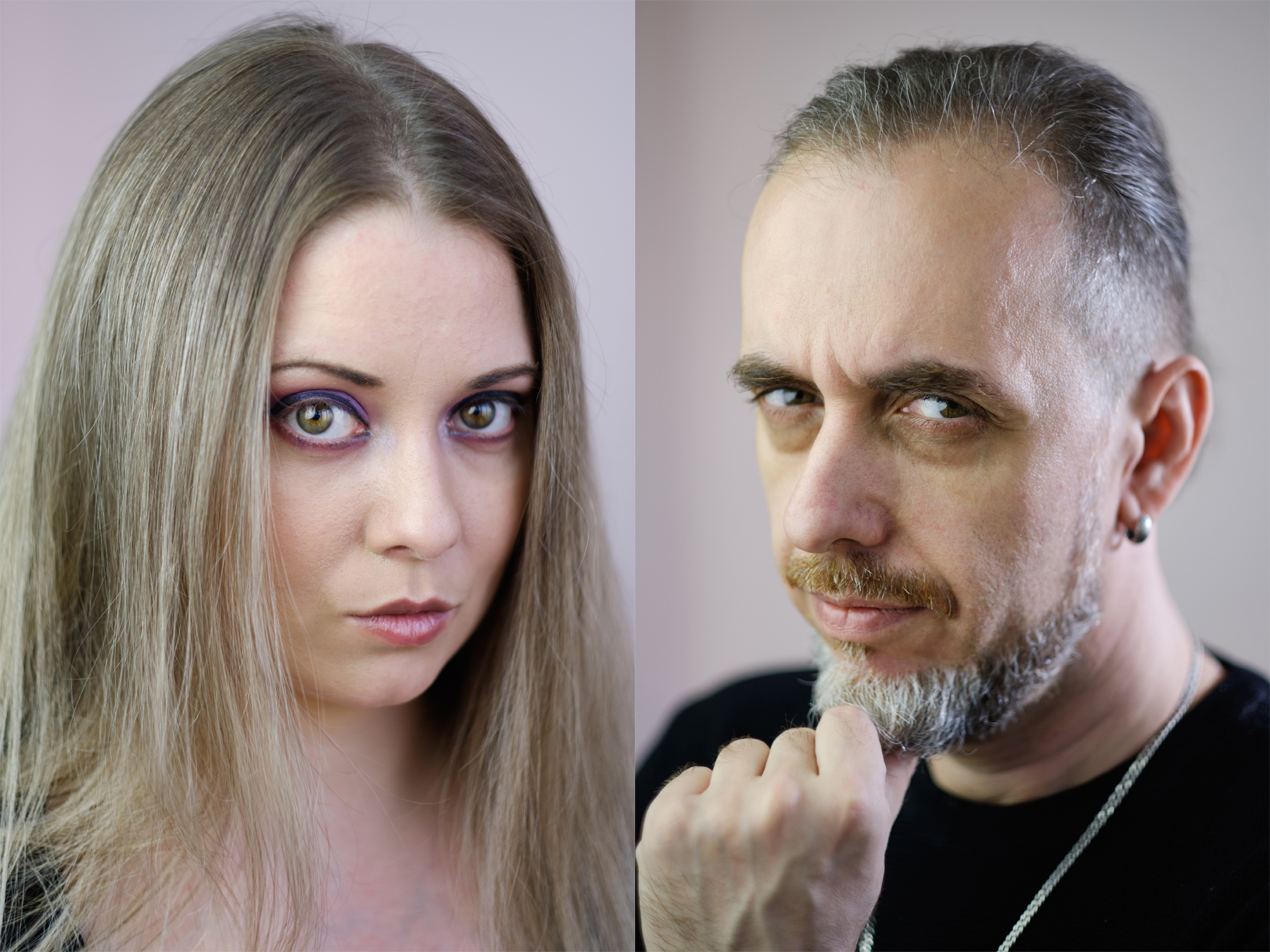 Sound effects of swords clashing and horses’ bits jingling set the stage for the deadly, thumping trod that’s the foundation of “Battle In The Sky”, as is its irresistible, purely metal groove powered by a repeated guitar melody and a booming, crushing bass line (you can hear the strings vibrating and it’s wonderful). The mix is stunning, big and bold and right up in your ears. Two verses in this manner lead to a tense prechorus ; the track quickens a bit in the second solo section for a change of pace but brings you right back to that stomp to end it. Here’s a religion reference, that of the eternal war between God and the devil, the “Morning Star” of the second verse (“Of all the beings that are called divine / One eclipses over brightest stars / Pride has brought him to rebellious plot / Soon to fall for the deeds he wrought”). The prechorus sets the stage for the conflict and the divine retribution (“Can you feel ‘em as their wrath is drawing closer / Can you see them as they’re coming from above / For this treason they will suffer unto no end / They will die for their sins in / Battle In The Sky”) and the chorus is just Dejana wailing the title itself. Again, it’s deceptively simple, but it works!

Our historical reference comes courtesy of “The Burning Of Rome (Cry For Pompeii)”, a cover of the Virgin Steele song – Pompeii of course being the ancient Roman city that had its conflicts with the empire before finally becoming part of it (that was prior to its later destruction by the eruption of Mount Vesuvius). Terse, insistent, repeating riffing bolstered by huge power chords in the starting melody give drama and prepare us for the events to come ; other segments are undermixed to provide even more musical contrast. This is the story of a soldier going off to a war where he knows he likely won’t return, but he has one more night with his love to ensure his legacy will continue (“… for I conquer” because “One child (will be) born to carry on”). It’s a skeletal story but still plenty emotional, with all the critical elements and details are in place – in the bridge there are hints of the result of the battle (“And the burning of Rome / See the tears”) and perhaps a little foreshadowing of Vesuvius (“Black tears will fall / And the flames will crack the sky”). The character of Dejana’s voice here is almost asexual ; she’s so adaptable that you ignore her gender in this context, she’s that convincing. And at the end, she loses her rasp and becomes almost tender as the story reaches its tragic conclusion (“Oh I see you cry… Open the gates, I’m coming home”). 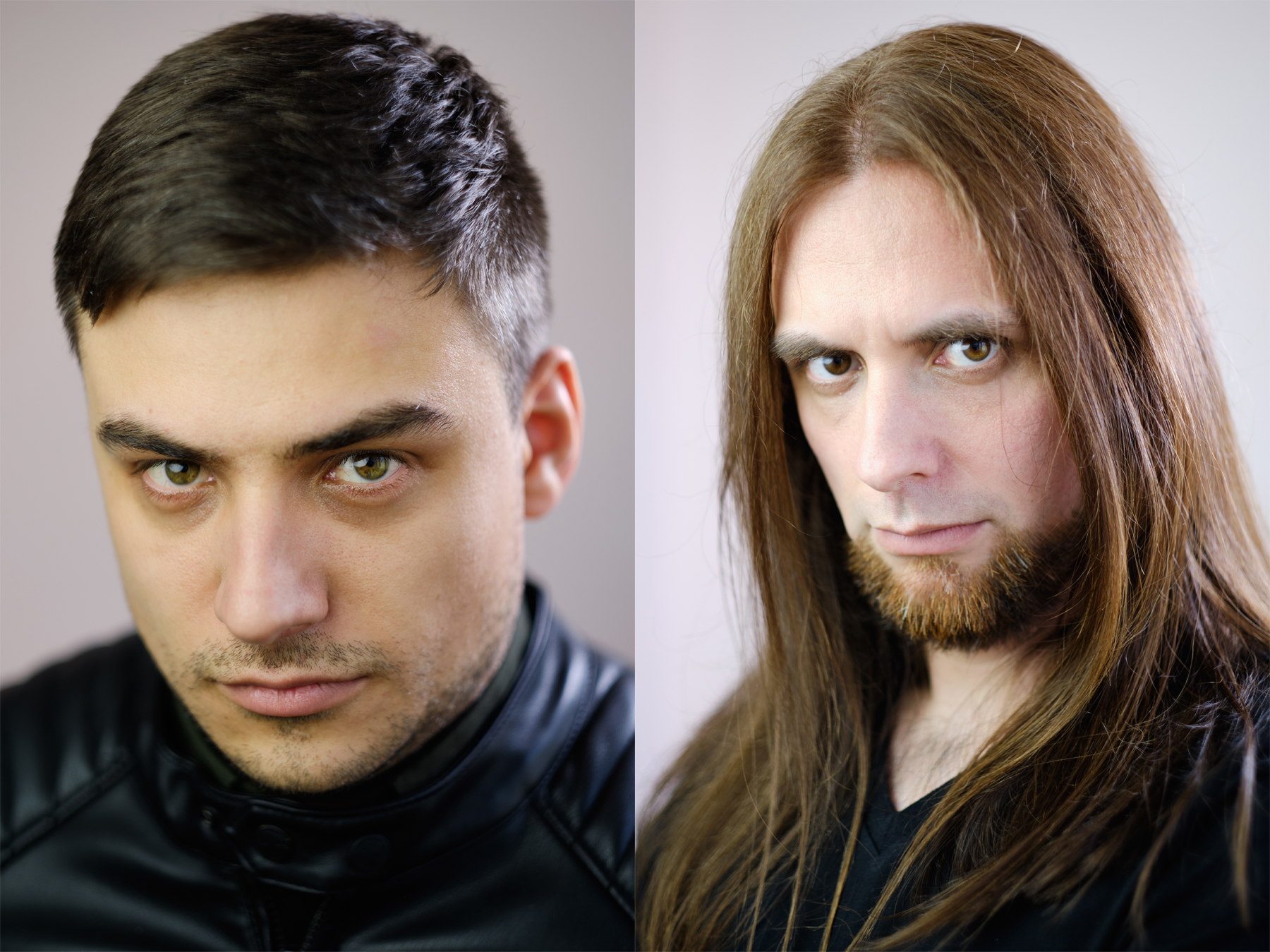 “Lords Of Light” is dedicated to one of Claymorean’s main influences, Manilla Road and its late singer Mark Shelton, and the sound here is pure power/traditional: the thundering, rambling, erratic main groove ; the points in the intro and solo section where it lightens and becomes reflective and shimmering, the drums a whispering hint in the background ; the hitching groove of the prechorus (so effective in conveying imminent action). It may be old-school in its approach, but it’s not static and not overdone ; their restraint and brevity is a sign of clear-eyed maturity. Dejana uses her grit only at points here, saving it for emphasis and relying on her booming, throaty tone for most of the track (and its minor key just makes it that much more resonant). Fantasy fiction is obviously the basis of this one, with mentions of “From the depths of Valusian sea” (a “Conan” nod) and “To the courts of Avalon”. There’s a mention of a “Prophecy foretold” and a “New religion is born” and the hinting at a heroic quest getting under way (“Mystified on the Ninth Wave we will ride”) with perhaps divine blessings (“…the Lords of Light”) in the stately, soaring chorus, but much is left tantalizingly unsaid.

“Spirit Of Merciless Time” has a decidedly Priest feel in its fleet, pattering rhythm and its overall theme – the masculine joint bellow of each first word in the two verses juxtaposes so well with Dejana’s penetrating treble wail. She is the avenging female force (“Curse on all of those who did her wrong”) who’s obviously been through trauma (“Flames burning till the morning light / Pain has ended with the dawn”) and left with nothing (“Final gaze up high / All her hope withered and died”), who has become what she was forced to become (“…Devil’s child / Born of fire and ice”). Salvation might be in the future, the tender bridge (led into by a beautifully hushed solo section) suggests (“Someday you’ll find a way / To leave it all behind”) – she alternates between wistful and innocent and powerful and decisive here, as if to say I’ll get to that peace, but I have the business of vengeance to tend to first (“You’ll stand up / You’ll rise”) as the original musical pace resumes. Again, they tell the story with a minimum of very focused details and imagery. 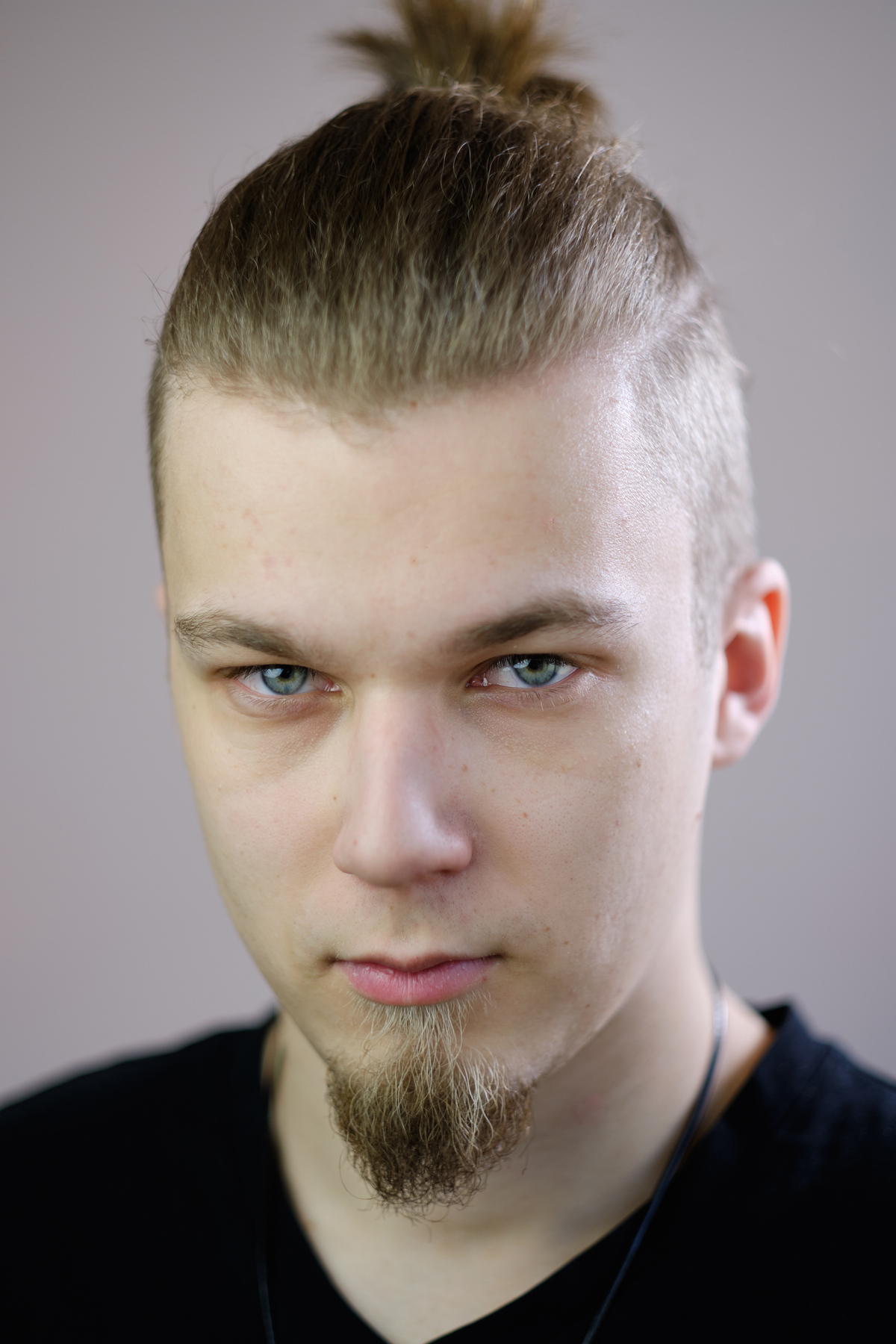 “Mystical Realm (Deorim In Absentia)” is another track where the careful mix lets you hear Goran’s fat bass strings to perfect effect. It’s rooted in a muscular, self-assured trod laid down by the riffing and bedrocked by the drums ; the solo section later is a reflective fuzzy meander at first that works in Dejana’s cries until Vlad inserts his high-end resolution. Dejana echoes the initial rhythm in the staccato, sing-song pace of the first two verses, in which she asks a host of existential rhetorical questions (“Do you feel like the world doesn’t need you? / Do you hear when the winds call your name?”… “Can’t you see that you don’t have an answer?”… “Do you feel all your dreams have been broken? / Do you hear when they play with your mind? / Do you know how to silence their voices? / Or you’re led by the blind?”). The chorus rather looks ahead to the conclusions of the last verse, especially the lines “Silence waits all your prayers you’ve been telling at night” and “We are all alone in the realm of the mystical light” – that is, no god hears you and there’s nothing there when we pass. And the final verse then is not questions, but conclusions that touch on philosophy (“Every kingdom falls, nothing is forever / Shadow takes us all into the void”) and religion (“Walk upon your way serve no man or god”). This skillful lyrical craftsmanship is pointed without being blatant.

Brief, driving and starring Marko’s relentless snare punctuations, “In The Tombs Of Atuan” is dedicated to the science fiction/fantasy writer Ursula K. Le Guin and bears the same title as her 1971 novel. It’s a very bare-bones sketch of the book’s plot: the main character, Tenar, who is taken from her family as a child to become high priestess of the “Nameless Ones” and her eventual questioning of her faith. It’s so brief, in fact, that it feels a little unfinished, an interesting idea that could have, and maybe should have, been fleshed out more.

But the bonus track “Blood Of The Dragon,” written by Cederick Forsberg of Crystal Viper, is power/folk metal at its best, lilting and nicely medieval, as epic and fleshed out as the album’s official closer was not. Dejana is delicate and tripping in part one as she tells of the brave souls who somehow escaped the dragon’s wrath but have heard of it through their lore (“Nightmares / Defined as visions by the Elders / A legend foretold by their fathers / In turn their fathers witnessed endless pain”) and who vow to bring “…freedom from the dragon’s reign”. The richness and fullness of her voice is the transition in the story as the warriors find their battle courage in the prechoruses, daring “Let the black wings rise again” and hoping “May its fearless heart know fear in the end”. In part two, the warriors yearn to “Avenge the lost souls of our brothers” and bring an end to the monster “By the bodkin arrow let it bleed out”. And the fight is joined in the bridge section, where the deed is done at last – a spoken/sung transition by the men of the band mourn the many deaths that preceded it. It’s not over, though – another beast lies in wait, perhaps its mate, and they fight anew. And perhaps the men’s chanted ending line “Let the black wings rise again from the fire”, accompanied by Dejana’s descant, hints that the struggle is never-ending – and as if to drive that point home musically, the main melody circles upon itself, again and again, before it ends on an acoustic take of the chorus melody.

There’s something very satisfying and grounding about tradition. As far out and diverse as metal gets, it’s refreshing to find your way back to its roots. And it’s really rewarding when those roots are given both respect and just enough freshening up, as Claymorean does here.