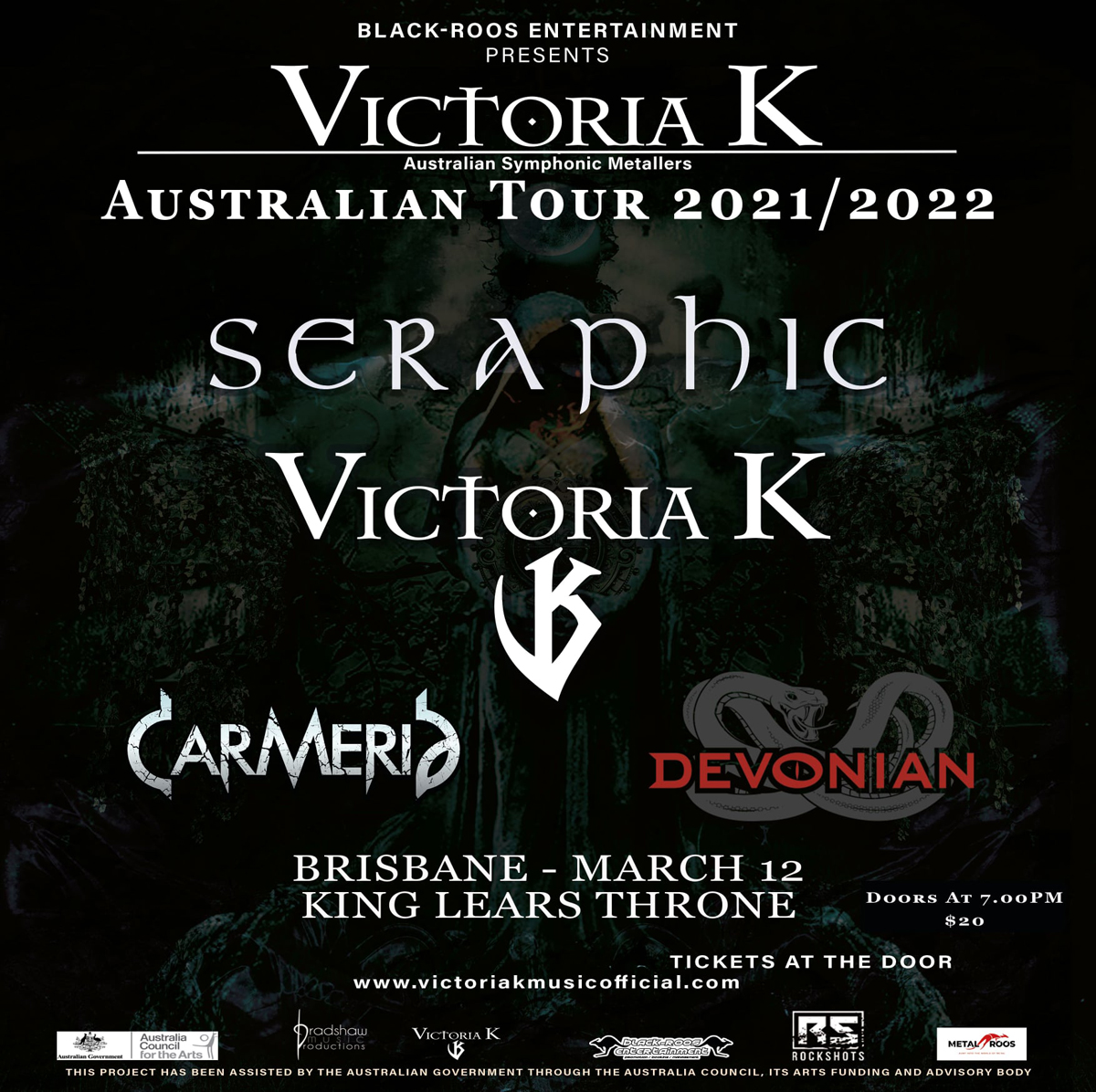 It’s 4 days after International Women’s Day and I’m off to see some of the most incredible female musicians and symphonic metal bands in Australia tonight!

King Lear’s Throne in Fortitude Valley is a tiny hole in the wall bar, split in two. One half is a tabled drinking section and once you walk all the way into that room the door on the right leads into the second half, with a stage located down the end and not much else. It’s an intimate venue which to me seems quite mad considering the caliber of bands playing tonight.

Brisbane based band DEVONIAN take to the stage and front woman Diletta Luna explodes into a powerful fury for their opening track “Asylum“. Diletta Luna shifts effortlessly between a melodic and thrash style vocal, all while donning a red cape that confirms I’m in the presence of a powerful being. DEVONIAN land more on the alternative rock/power metal side of metal and their second track tonight “Abyssus“ displays the prowess of Hayden Roberts on rhythm guitar. 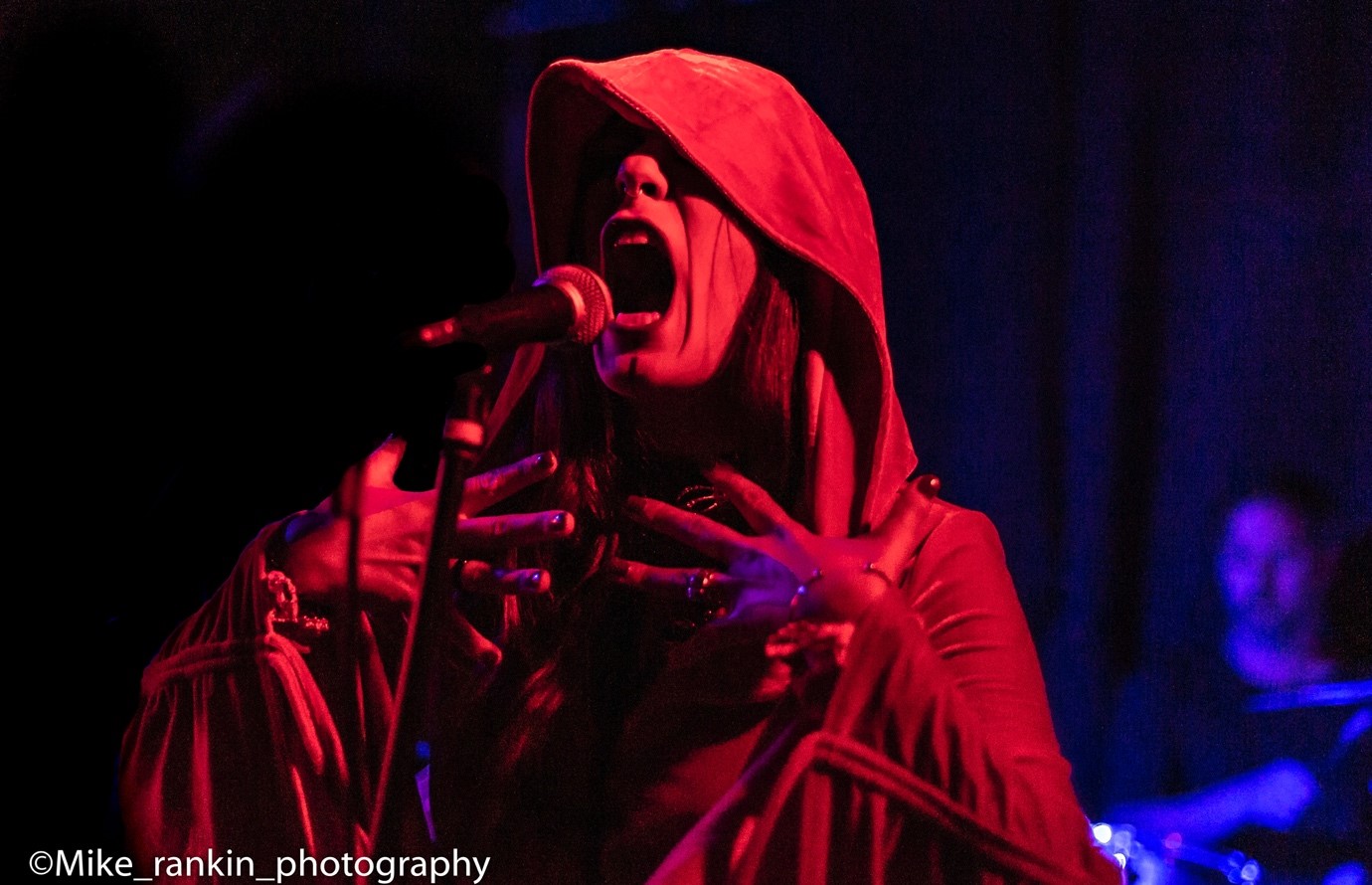 Diletta Luna’s vocal performance really adds a depth to DEVONIAN, her switching back and forth in vocal style makes me think that it represents the duality of life, dark and light, reality and magic. DEVONIAN are exciting and really something special to witness live. The band is heavy hitting and supported by some epic shredding by Nathan Allsop on lead guitar and Alan Mahood on drums. Rounding out the set DEVONIAN unleash “The Other Half“, a hard-hitting banger of a track. Their last track “Witchcraft” is a fitting end to the set and it’s crazy to me to level of skill and performance I’ve already witnessed tonight and the night has only just begun. Check out their video for “Witchcraft“! 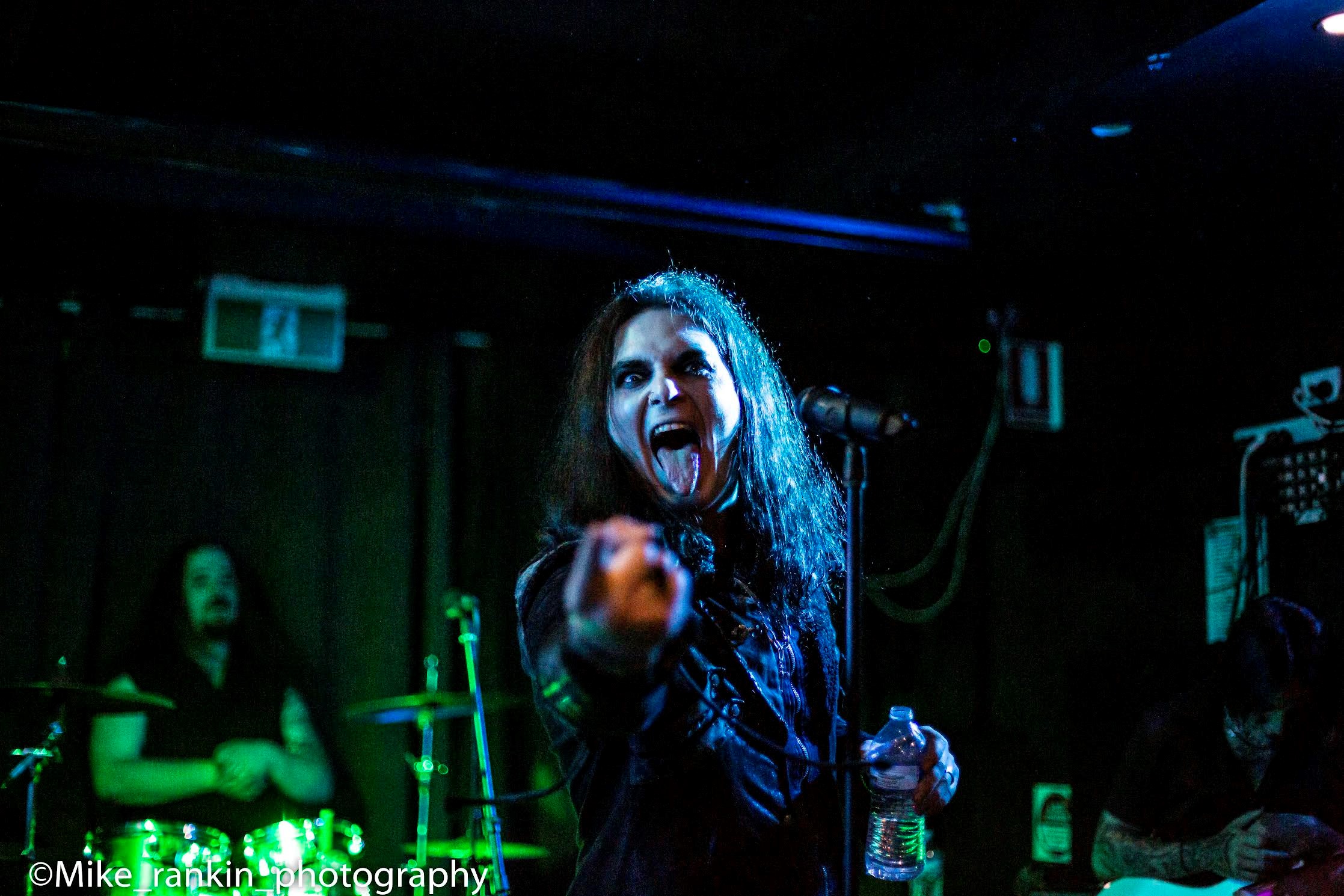 Next to the stage was Sydney based band CARMERIA, the lead singer Jordan Von Grae looks like a cross between a young Billy Corgan and Ville Valo. As the band started playing their intro Jordan Von Grae jumps off the stage and wanders to the back of the now substantial crowd to perform some of “Morningstar“ at the back of the room. Carmeria is gothic symphonic metal and Jordan Von Grae’s voice is angelic. Mishka Bobrov, a hooded figure on the synth adds spookiness to the sounds which increases the gothness. CARMERIA is theatrical in their stage presence and Jordan Von Grae is a consummate performer. Jerry Zahija on guitar is incredible to witness and the chemistry between the band members is palpable. Emma Louise Nagy on bass plays with a sharp technicality which displays a raw talent. CARMERIA’s tight musical performance and theatrical stage antics is a strong showing of seasoned professionals and the caliber of the bands playing tonight’s gig is seriously blowing my mind. 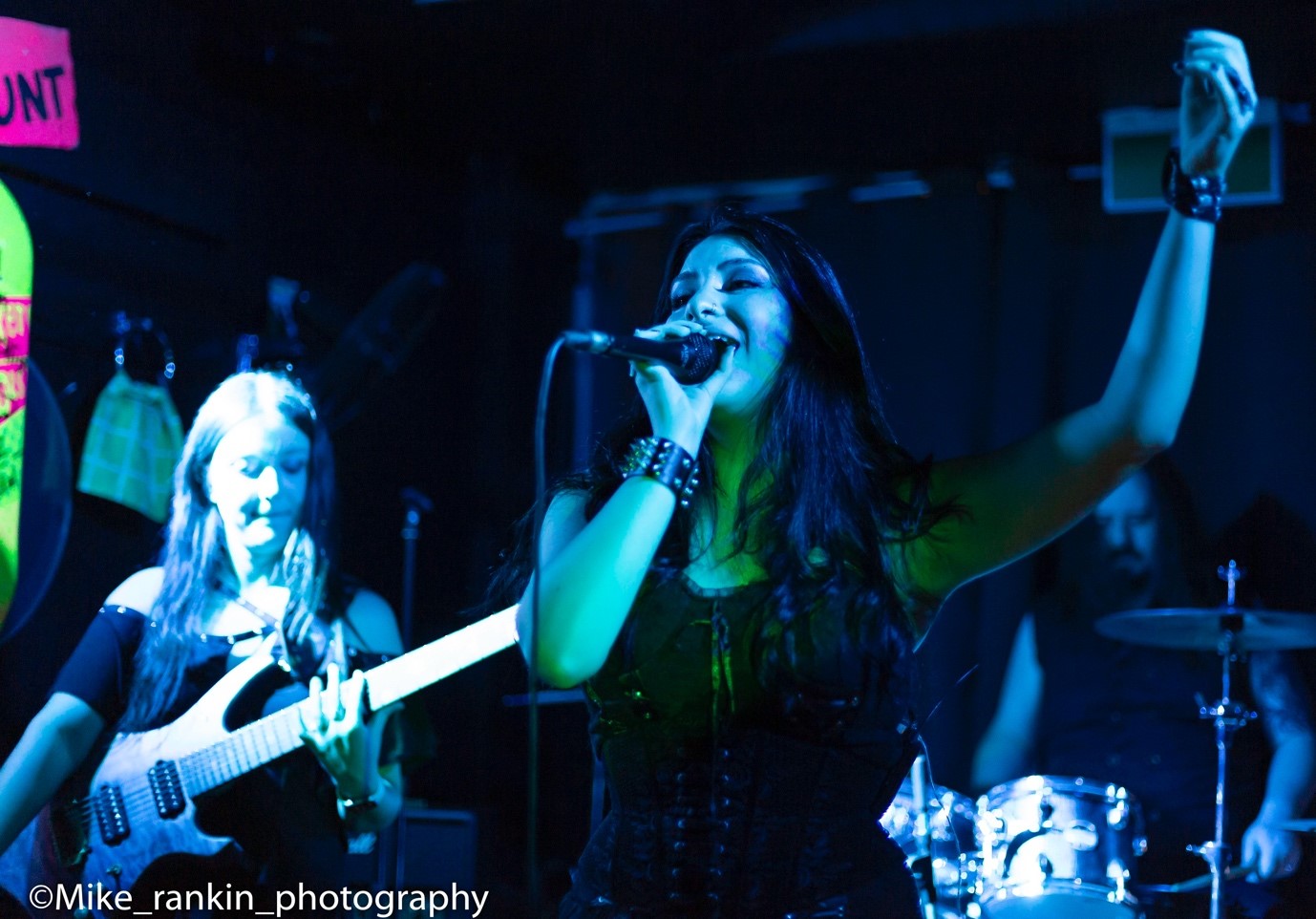 Third up is VICTORIA K who is standing on stage in a blue lit stillness. After a middle eastern sounding intro, VICTORIA K break into “Freedom Uncharted“ and immediately Victoria K’s vocals are outstanding, both controlled and powerful with an immaculate tone. The next song “The Haunting” is an Evanescence like track, beautiful in its sorrow while maintaining the dark undercurrent inherent in pure symphonic metal. “Forsaken“ ramps up the energy and has much more intense drumming from Lachlan Blackwood (who is doing double duty tonight, having drummed for CARMERIA). A toybox tinkering sound brings us into the track “Freaks” and once again Victoria K is effortlessly powerful and demonstrates that she belongs amongst the best. Supporting on bass and growl vocals is Charlie Curnow. “Freaks” is a highlight for me, the track has an ebb and flow that pulls me in emotionally. “Mist Filled Sky” takes it down a notch for a second and then breaks into heaviness and gives ultra-cool guitarist Julia Mammone a time to shine. Another incredible song was “Lacuna“, all of the power and beauty of Victoria K’s voice is given to us as in what I can only describe as a gift. I have to admit I came to this gig not knowing anything about VICTORIA K, but now I am a lifelong fan. Check out “Matrix” from their album “Essentia“ here.

The feeling I get most from this gig is a sensation of being astonished. I’m just feeling a little confused as the caliber of bands I’m witnessing belong in stadiums and not this tiny bar in the middle of Brisbane. 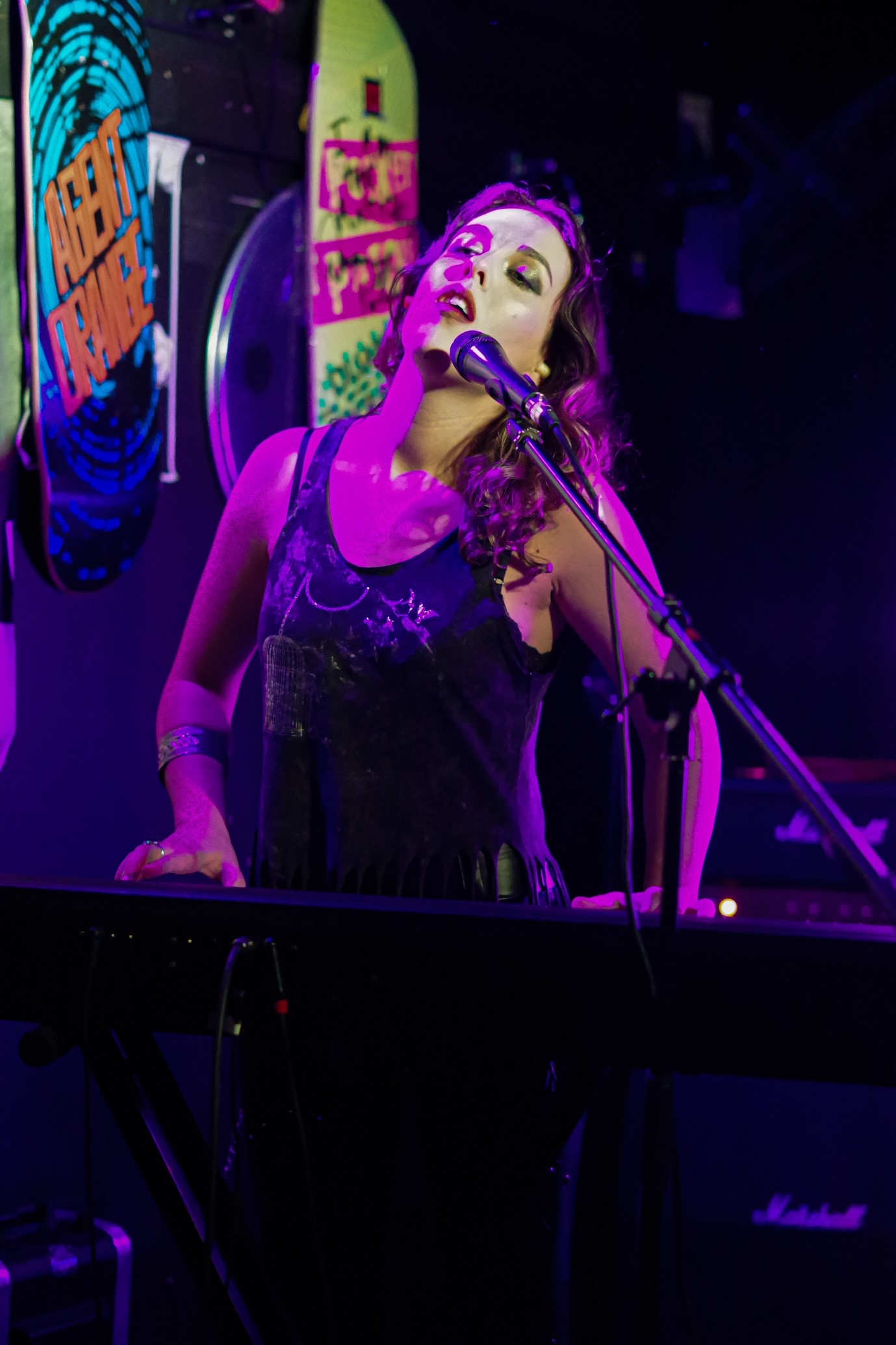 Speaking of which, the draw card for me and what got me at this astonishing gig is Brisbane based symphonic metal band SERAPHIC. Led by pianist and vocalist Sam Wolstenholme, SERAPHIC is a powerhouse of a band. Their album “Chrysalis“, which was released in October 2020, is a big favourite of mine and I’m excited to see them play live again. SERAPHIC open with “Garden Of Unearthly Delights“ which gets the crowd immediately into headbanging territory. The next song, “The Monster Within“, has this epic guitar solo by lead guitarist Patrick Feagan while rhythm guitarist Michael Bates also provides growl vocals. Newcomer to the band Rachel Kate Brand on bass shreds while SERAPHIC play their newest track “Insidious“. SERAPHIC are master musicians and storytellers, combining emotive lyrics with really sophisticated song structures that take you on an emotional journey and that perfectly describes the song “Shapeshifter“. The drop into intense drumming about halfway through the track is a testament to the skill of drummer Daniel Langdon and as Sam Wolstenholme breaks out into a belt it is an absolute thrill to bear witness to. Ending the show is “Midnight“, a powerful anthem of a song that perfectly closes this incredible night.

Due to the intimate nature of the venue, I spent the night not only witnessing some of the most talented musicians, but I also got to hang out with the artists themselves as they watched the other bands. The fact that women were represented across all four bands, in varying roles, also felt really special to me. I did the math, women were 31% of all musicians, and although not the 50% of equality dreams, or the 100% of my personal dreams, the fact that over 30% of the musicians tonight were women felt revolutionary. I honestly struggle to put into words how this makes me feel. The words replaying in my mind is “Representation Matters”. Although not designed as a female power event, it was only 4 days after International Women’s Day and it felt like tonight was a small step for mankind, and a giant stomp for women.