As metal as they assuredly are, the Ukrainian groove/progressive/djent band JINJER is just about anti-metal at the same time. Cerebral and aggressive and challenging, they eschew many of metal’s trappings and touchpoints to create something completely their own.

Their North American tour in support of their latest album “Wallflowers” stopped November 19 at the Midtown Arts Center in Harrisburg, PA, with openers Suicide Silence and All Hail The Yeti. Sharp-eyed fans could spot singer Tatiana Shmailyuk watching Suicide Silence — impassively, her slashes of neon-green eyeshadow reflecting in the stage lights — from the balcony of the nicely-full and enthusiastic venue. But while they were a battering ram, bludgeoning and unrelenting, JINJER was a sculptor, wielding hammer and chisel at once delicately — carving out bits of sonic detail — and powerfully — hacking and destroying established moods, rhythms and vocal stylings. Tatiana’s harsh vocals are as potent and skilled as anyone’s, but her elastic, vibrato-rich, burbling voice is a real treat when she graces you with it. 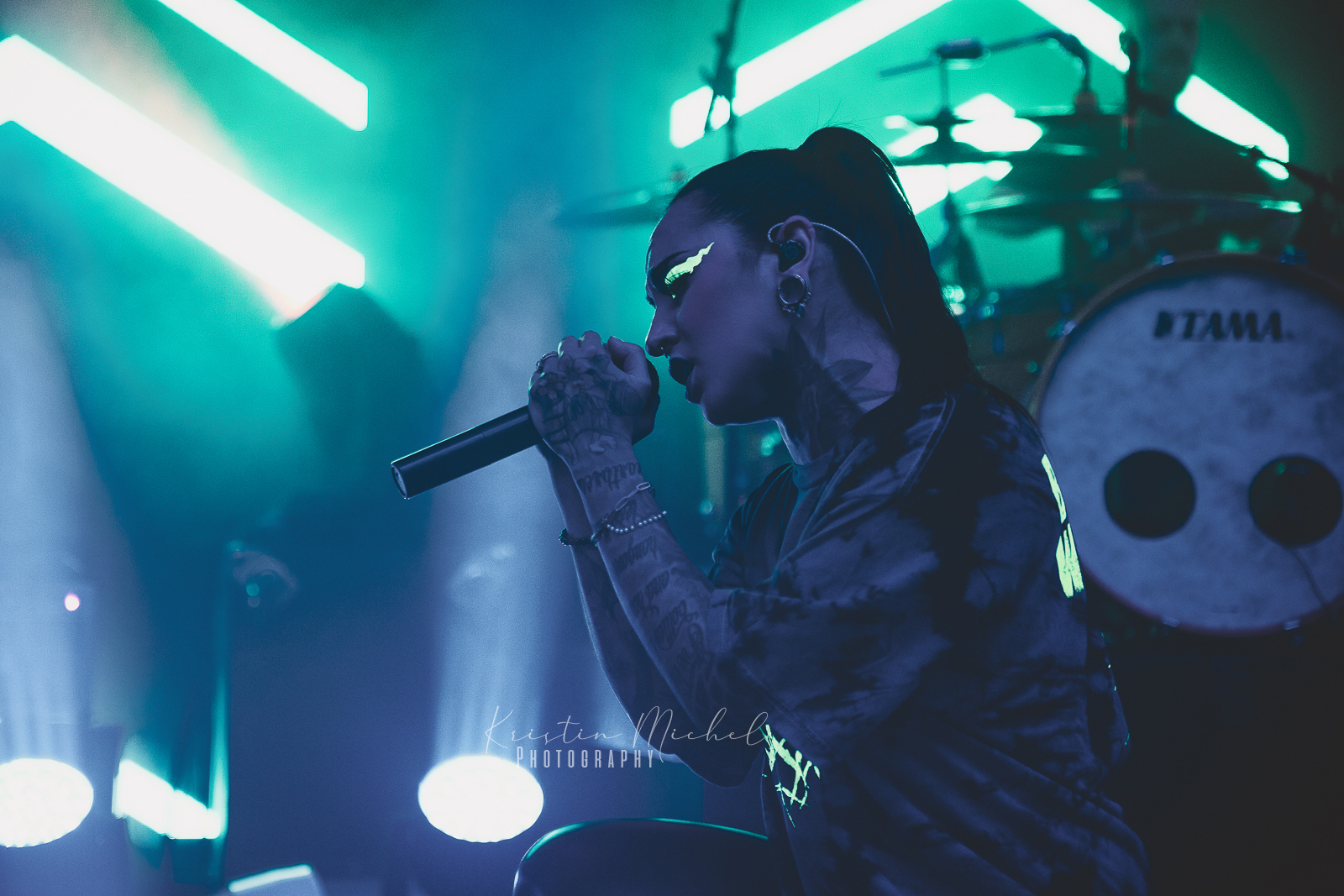 JINJER’s lyrics are quirky thematically and in their imagery. Some include bits of imaginary dialogue, some lines are almost humorous (“You’re as shallow as a puddle on a hot summer day” or  “Carrying a sack like you are looking for something / I am sure you’re here not to give me presents”). Live, though, it seems the point is to impress musically, with unflagging energy and stamina — they crammed 15 songs into an hour and a half, a feat possible because of the economy of their songs (most are usually around four minutes). Each one, though, is jam-packed with density and bubbling suspense as to what might happen next — they never allow you to become complacent or used to one thing, they are far too restless for that.

Theirs is not not easy or comfortable music. It’s jagged and pointed and slippery, erratic and experimental and sometimes dissonant. It’s intellectual for sure, like freeform jazz — it’s an exercise of the mind, crushing and brutal but often airy and expansive. They demand attention from their audience — there’s no room for laziness.

Tatiana has said “Wallflowers” is “dedicated to my personal, psychological state” and they delivered several tracks from it that night, beginning with “Call Me A Symbol”, a biting comment on fame and egotism. In a Suicide Silence T-shirt whose lettering glowed green to match her eye paint, Tatiana and her wickedly tight bandmates — guitarist Roman Ibramkhalilov, bassist Eugene Abdukhanov and drummer Vladislav Ulasevich — pushed and pulled against each other in the first of countless displays of their mastery of dynamic and pacing. They are disciplined alongside her harsh vocal, lush and pulsing with her clean one. 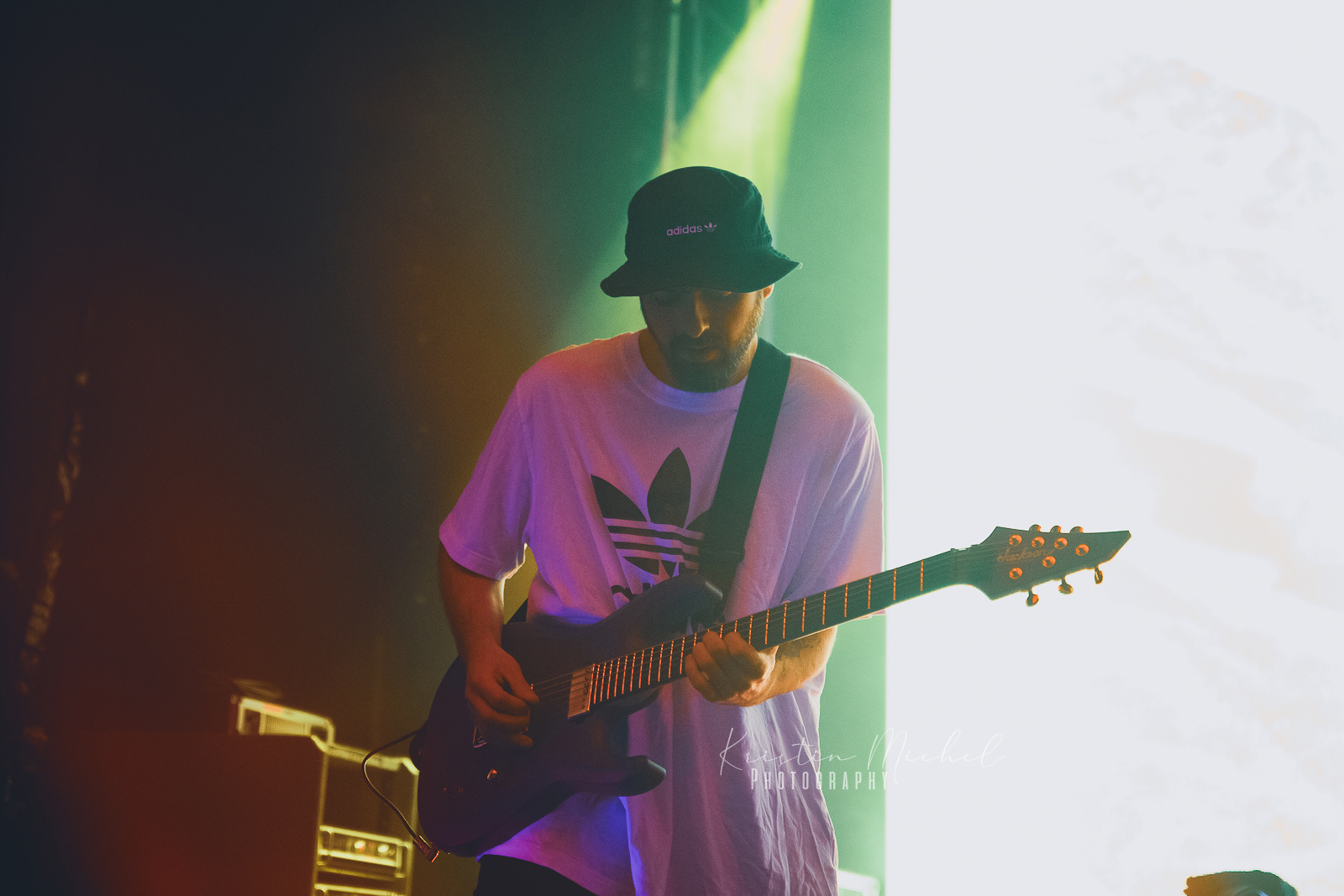 She is a tiny powerhouse with a hip-hop swagger, lashing her long ponytail as she headbangs — when she stands atop the cabinets at the front of the stage, her confidence and command are clear, but without ego or posturing. By contrast, the unassuming Roman and Eugene are almost motionless, their energy flowing instead through the detailed soundscapes they create. “On the Top” had Tatiana alternating between spat-out words and almost torchy singing as Vladislav’s incredibly textured and nuanced drumming went at counter purposes — her roar of “nobody else” at the end drove home the song’s message of the futility and grind of pursuing success, a nice trick of setlist craft after “Call Me A Symbol”.

Tatiana’s pacing and snarling set the feel for the tale of madness that is “Pit Of Consciousness” — it’s uncanny how she’s able to switch between growling and singing with such effortless and unconscious ease, and that perfectly echoed the tone of the lyrics as they see-sawed between clarity and insanity. The rolling bounce of “I Speak Astronomy” was a tour de force between Tatiana’s soulful belting and dreamy drift over Vladislav’s delicate, jazzy cymbal counterpoint and the slash of her bellows over his metronomically precise double kick. Trippy and fantastical, accompanied by an equally space-age lighting display, it had moments of great beauty. 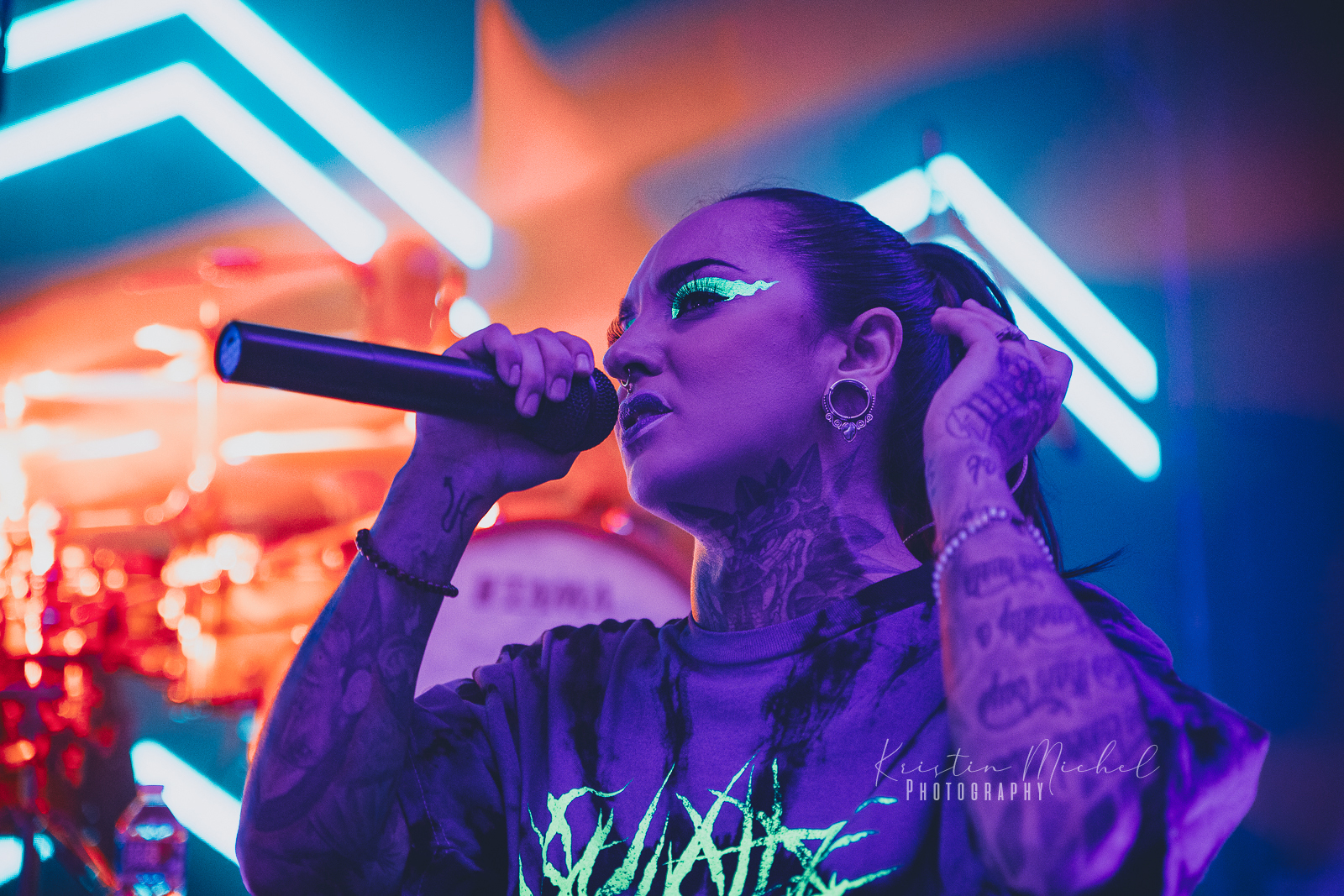 At this point, the arrangement of songs according to theme came up again, beginning with the “Wallflowers” track “Disclosure!”, which hints at government surveillance and control. It never lost its way as it raced between deep groove and elongated interlude and chaotic thrashing. The sauntering “Judgement (& Punishment)” featured ‘Tati‘’s taunting sneer at “narrow minds” and “an individual with bitter inner world”. And the nightmarish psychological torment, vividly personified, of “Sleep Of The Righteous” had the crowd clapping to its sprightly rhythm before Tatiana shattered the lightness with gruesome lines like “I see its shadow, the blackest black / The widest grin from ear to ear / I see its tail like a snake / I feel two palms upon my back”. Again, their skill in shifting between moods and tempos, even within mere moments of a song, was really impressive.

“Ape” and “Retrospection” seem to have been intentionally paired, both hinting at the flaws of humanity that began with our first upright steps and continue as we deal with our past. Tatiana’s guttural, drawn from the depths of her being, drew rapturous applause in the latter song, but her elegant clean singing atop the song’s jaunty swing was just as notable. She was bathed in light at the start of the musing “Perennial”, crooning and roaring alternately to fit the sentiment of the song, which hints at everything from death to renewal to hallucination, even to depression and recovery. She dabbled in torch again alongside Roman’s faint guitar melody and Vladislav’s skittering drumming. 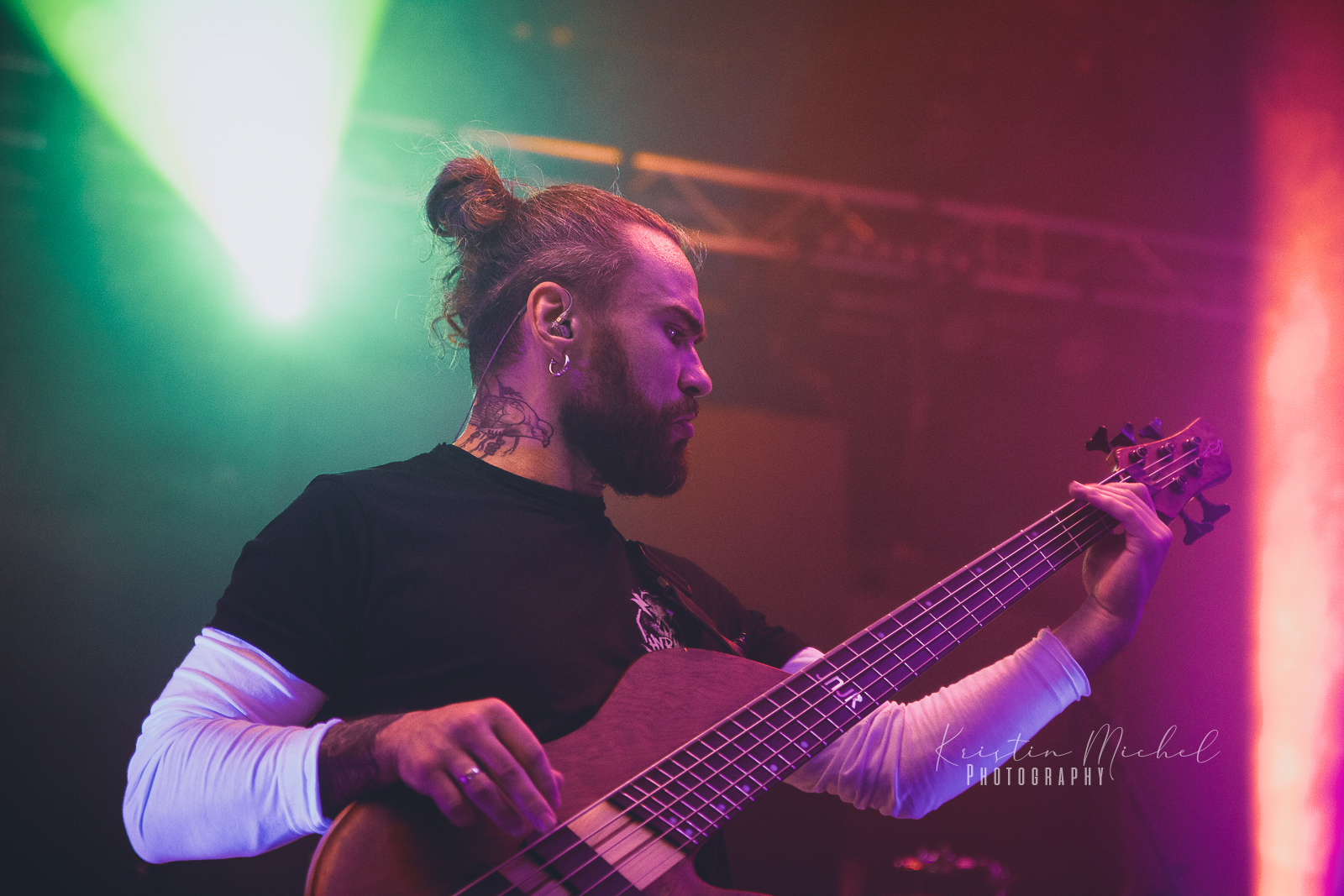 The tyranny of religion and religious instruction in the harrowing and deeply personal “Teacher Teacher” was paired with the equally personal title track of the new album — Tatiana even said it was “dedicated to me”. Her impassioned delivery, singing and growling tells of escaping within yourself, of introversion (“Silent and satisfied / Misunderstood and proud / Biting on my tongue / In fears of saying something wrong”) and it also touches on the isolation created by the pandemic (“Stay in, stay in / You can be alone… you can feel like home” ; “This life is a lockdown” ; “Say hello to the sick, sick world” and “you are people avoiding people”). Here too was another point where the band’s progressive/jazz influence was prominent — Vladislav’s drumming was precise and clever, never complacent or cliched. And even this late in the set, Tatiana was indefatigable, missing nothing, barely even winded.

They closed with a trio of new tracks, beginning with the wry “As I Boil Ice”. For all its humor and wordplay (in lines like “Others meditate / And I promote calamity” and “…I got something to complain about / Where is my zest, interest? / You gave me wrong address / Whom do I address all my complaints?” and “I wallpaper when there is no wall”), its tension was palpable. It skittered uncomfortably along your skin. “Mediator”, with its on-a-dime shout of “Stop! Go!”, was a definite political statement, hoping for good to happen (“I wanted a loser to win / The thin never starving”, “I wanted the poor to live in abundance”) and warning that to ignore this will make it explode (“We’re halfway through to freedom / The path is treacherous / The best way to make a kettle boil / Is to turn your back on this”). When Tatiana roared over top of that groove and atonal melody, its message became even more insistent and savage. 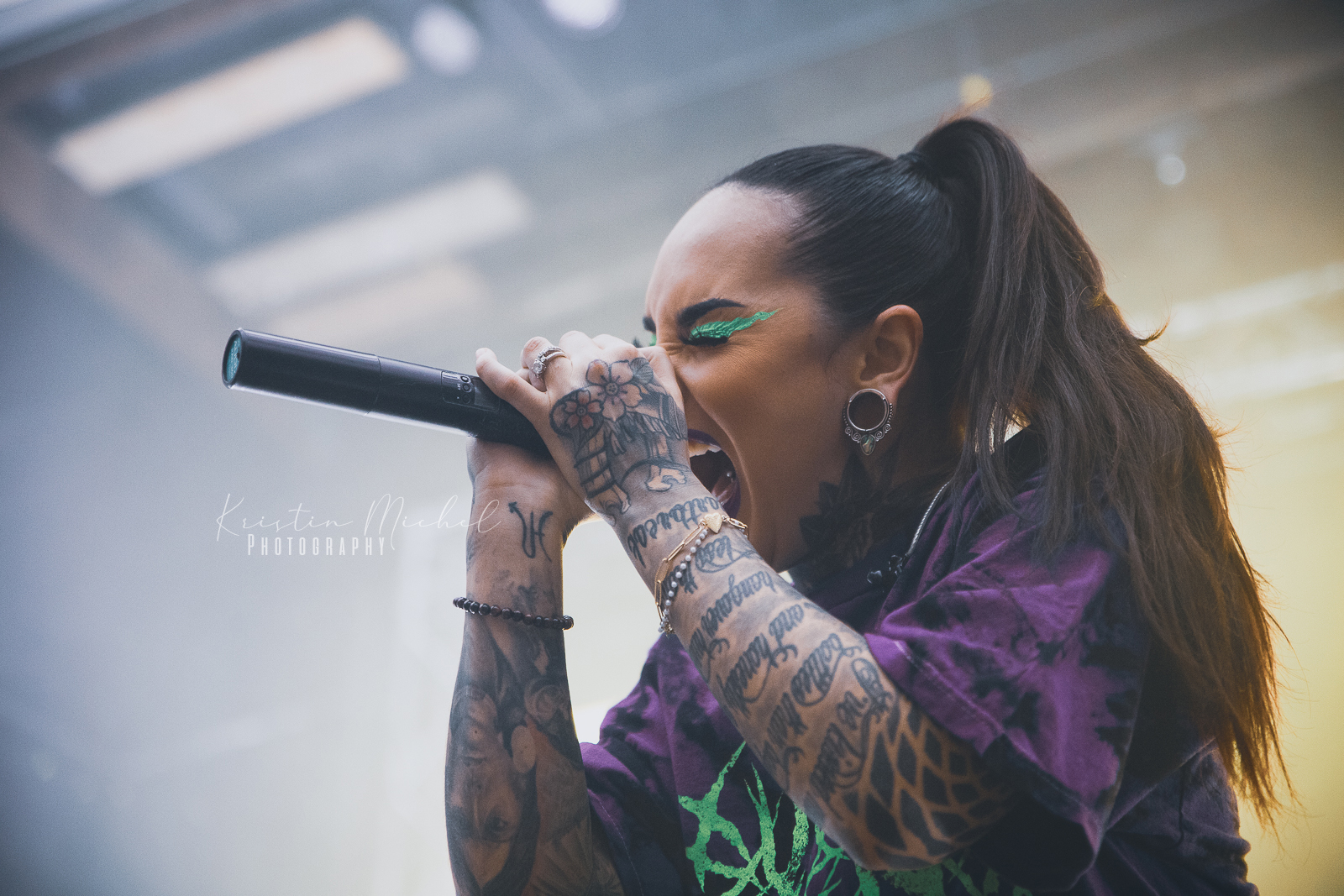 Tatiana at last addressed the crowd at length before the closer “Colossus”, manners exquisite as she thanked them for their “visit”. Singing about the monolith of social media, how haters can be anonymous, she again reached down to the depths of her growl to rage “Show your faces”.

Adding the visual of the live setting to the depth and range of their recorded work only makes JINJER that much more powerful. They may be an acquired taste, but it’s well worth the effort to acquire it.