The story of Italian gothic metal band WALK IN DARKNESS is steeped in mystery. Except for singer Nicoletta Rosellini, the real names of the other two band members (guitarist and songwriter Shaman and bassist Monk Key) who form the heart of WALK IN DARKNESS remain unknown. Besides, they consistently appear in black habits with their faces always unrecognizable. But that outfit did not stop them from entering the studio again to record WALK IN DARKNESS’ fourth full-length album “Leaves Rolling In Time” that will be out on January 20th. We tried to unravel the mysteries by asking Nicoletta some questions. 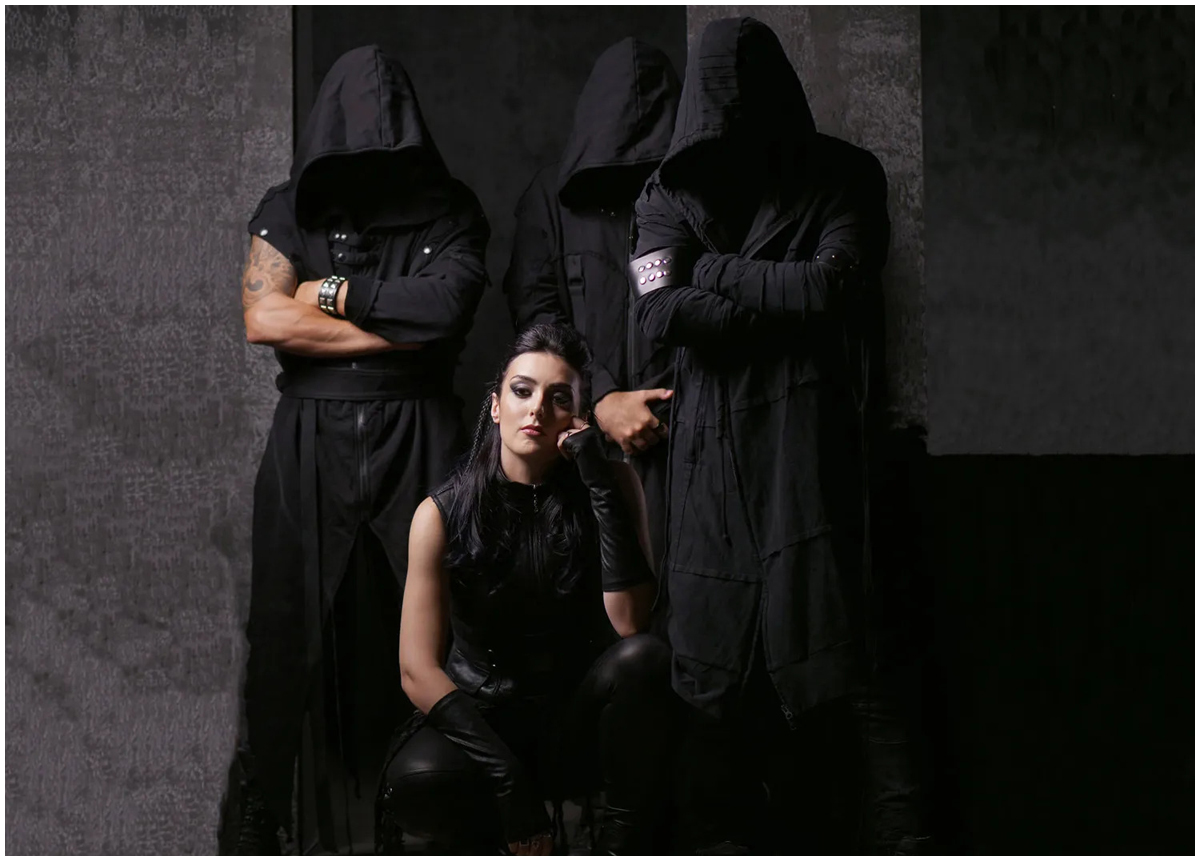 “Leaves Rolling In Time” will be WALK IN DARKNESS’ fourth album in just five years after the release of your debut album “In The Shadows Of Things” in 2017. Are you so inspired to write new music time after time or just hard workers?

Shaman, our mastermind, guitarist and composer, is deeply inspired by the human condition when writing music. And we can totally say that in the last 3 years this world offered him a lot of inspiration for our latest two albums. The first album was released in 2017 but we worked for more than two years since it was our first album together. Now we are working like a well-oiled machine, we know each other and the best way to write our music.

There seems to be some confusion about who’s in the band now, also caused by the photos you publish on your website and your Facebook page. Is WALK IN DARKNESS a trio made up by you, Shaman and Monk Key or is it all part of the mystery that the band is shrouded in?

Me, Shaman (guitars) and Monk Key (bass) are the core of the band, in addition we have Arcanus on the drums. We often collaborate with other musicians such as Emiliano Pasquinelly (growls) and Gabriele Boschi from Winterage (orchestral arrengements). In this album you can also explore a duet with a famous opera singer (but she has to remain anonymus – glad it also fits in the WID concept!) in the opening track. 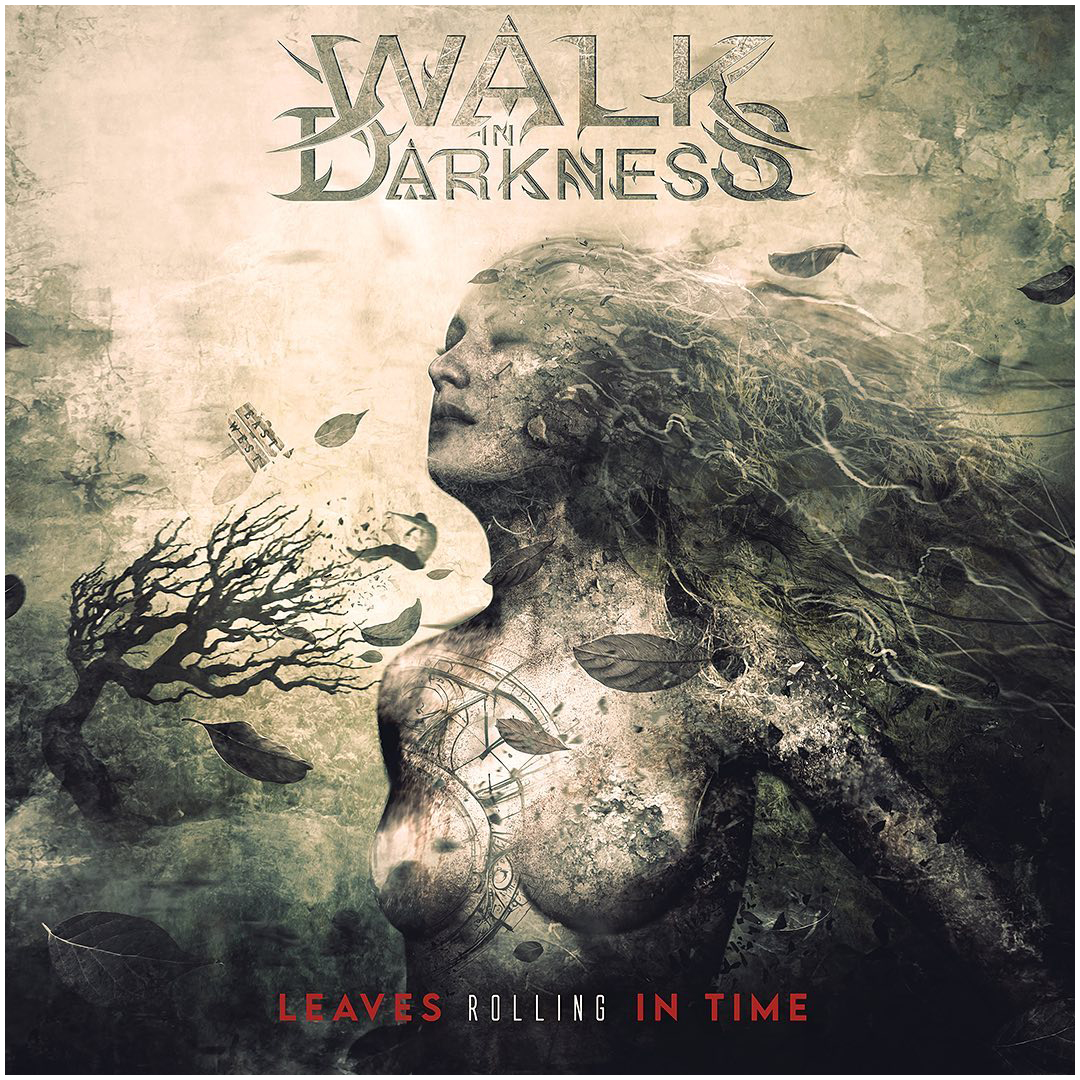 The new album was first released in November 2022 as a digital version and this month the physical version will be available through Beyond The Storm Productions. Why did you choose for two separated releases?

We managed our digital distribution by ourselves and Shaman felt the urge to release such a complex and deep album as soon as possible, while when you have to arrange a physical release, it requires up to 2 months. Shaman wanted to share the music as soon as possible.

So far, WALK IN DARKNESS have released five official videos and one lyric video from “Leaves Rolling In Time”. That’s 2/3rd of the complete track list! Will there be more? You still have three songs to pick from… 😊

Actually, we are already recording new songs. So the next video you will see it will be a new standalone single (to be featured in album no.5 later on!).

Let’s go deeper into the album and start with the cover art drawn by Carlos Fides. When you look really close, there’s a lot to be seen. Obviously, there’s a woman in a storm with leaves flying around. But very striking are the “EAST WEST” sign and the ‘thing’ on the woman’s left breast. Can you tell us more about the cover art?

The album was written between Spring 2021 and Summer 2022. As Shaman says: “Humanity rolls over time like leaves in the wind. We follow our destiny moving sometimes towards east, where time, magic, poetry and love were born, other times we move towards west where the sun dies and the light dissolves into a maze of lies”. The woman in the storm is representing the fragility of humanity. We’ve already worked with Carlos on our 2nd and 3rd album and he’s always on point to describe our concept with his art.

When you read the lyrics that are on your website, it looks like there’s a central theme with subjects like Ships and Oceans, Gods and Demons, Atlantis and War. Is “Leaves Rolling In Time” a concept album about the future and the past?

I would say that this concept is more about the present, a turning point moment for all humanity. We describe the world in a more epic and post-apocalyptic way but the audience can see a lot of reference to our current situation. Shaman says that “Between pandemics and wars humanity is going indifferently and unconsciously towards a flat and dystopian world, without memory of the past, without ideals and without feelings, limiting itself to climb over the rubble of a dying world. Yet, in the distance, you hear voices that speak of awakening, culture, poetry, beauty, feelings. These voices are our songs”. In this concept Atlantis (the city of gold and happiness), Wars, Gods and Demons have a contemporary meaning.

“Elizabeth” is the last track on “Leaves Rolling In Time”. Who is she? A symbol of hope?

“Elizabeth” is a love song in the new dystopian world. Human beings are not able to feel love in the same way as before, but it seems like there’s still a spark of light in our hearts. 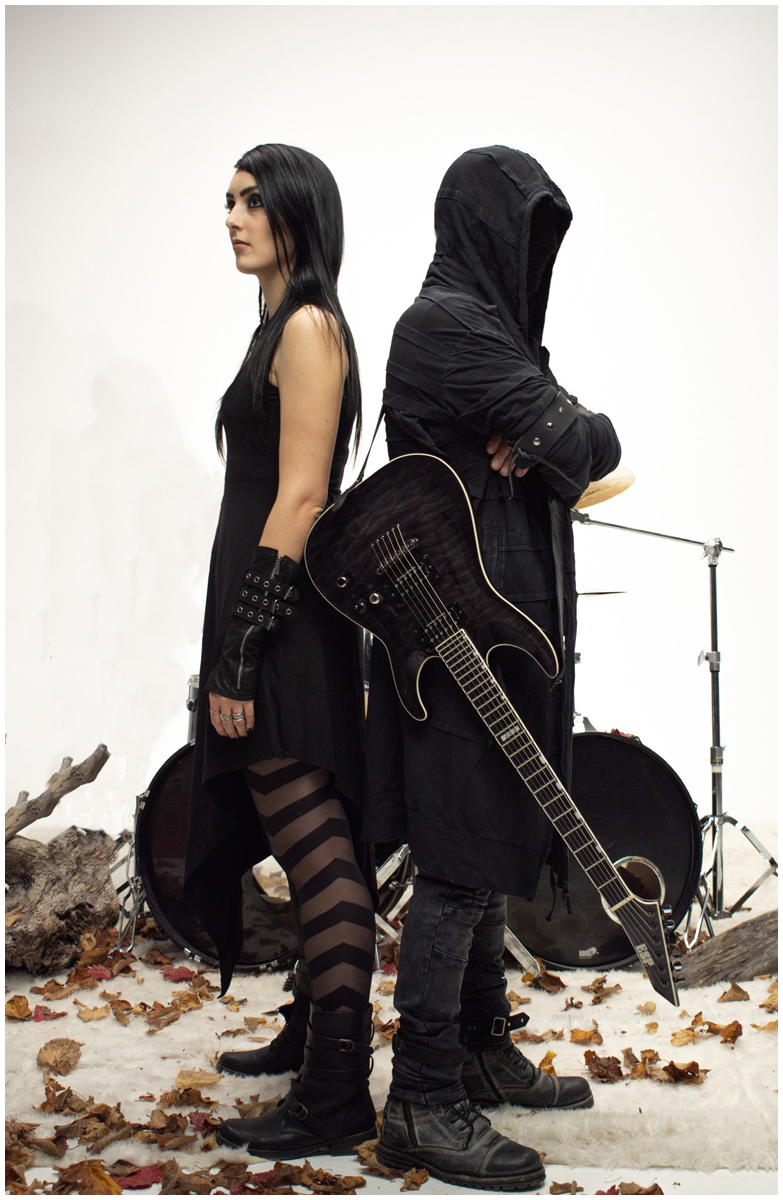 The music on “Leaves Rolling In Time” is straightforward symphonic/gothic metal, but it sounds like you put a velvet layer over it with your sweet vocals. It’s not at all brutal, but very accessible. Was that your intention?

It depends on the narration of the song. Sometime you can hear my soft voice, others I’m full voice belting or screaming over an anthem of humanity. It’s all about what lyrics are saying in that particular part of the songs.

Speaking of vocals and you already mentioned them in the beginning, you brought in a mysterious female opera singer and Emiliano Pasquinelli for the growls. Where can we hear them on the album? And how about violinist Gabriele Boschi?

Emiliano is collaborating with us since our first album, every time you hear a growl on our songs, it’s him. Gabriele Boschi (who already worked with us on “Sailing Far Away”) did the orchestral parts of “Ships To Atlantis” where is also featured the mysterious opera singer.

On the bonus track “No Oxygen In The West (Shaman Version)” we hear the Shaman himself on vocals. Is he going to do this more often in the future?

In the last two albums, Shaman’s vocals can be heard from time to time as lead vocals and also as backing vocals. He’s also the one writing the vocals lines, so it happens sometimes that we go to the studio and realize that a certain part of the song is more beautiful with a lower and deeper voice as his one.

How are you going to support the release of your new album?

Videos are our main source of promotion. WID is not a club shows band, so do not expect us on tour any soon. If we ever got to do concerts, it has to be a full experience including dancers, visual effect, poetry. We are running some PR campaigns to help spread our music, but we are already working on a new album.

Besides WALK IN DARKNESS, you also sing in Kalidia and The Erinyes with Justine Daaé from Elyose and Mizuho Lin from Semblant. Can we expect some new music from these bands as well in 2023?

There will be a lot of new music from me in 2023, but I can’t go in details for now. There will be important (and probably unexpected!) news in a few months. Stay tuned on my social media! 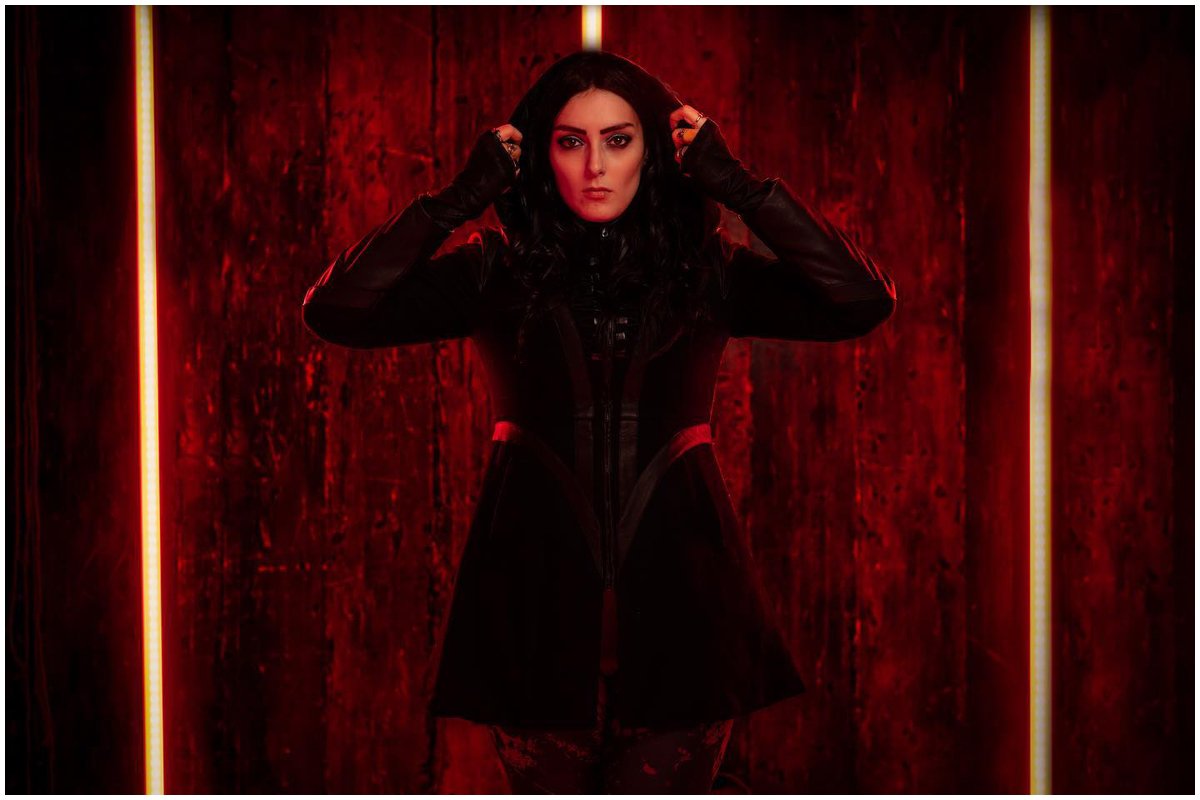