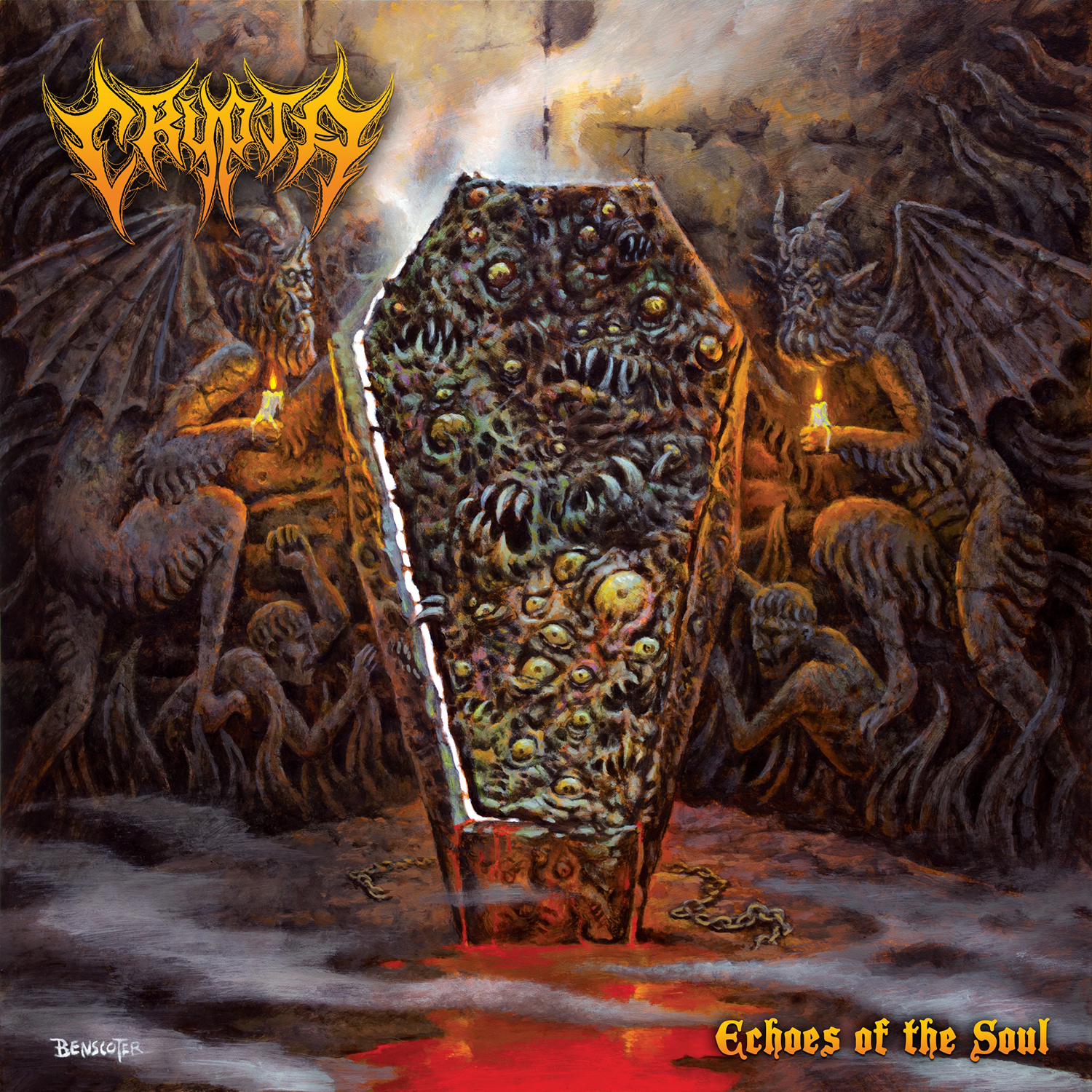 It was quite a scare when both vocalist/bassist Fernanda Lira ánd drummer Luana Dametto announced that they would abandon Nervosa, leaving Prika Amaral all by herself. But as if nothing had happened, Prika went on with Nervosa and Fernanda and Luana formed CRYPTA with Dutch guitarist Sonia Anubis (Cobra Spell, ex-Burning Witches) and Brazilian born guitarist Tainá Bergamaschi. Nervosa kicked off with their album “Perpetual Chaos” in January 2021 and now it’s CRYPTA’s turn with their debut album “Echoes Of The Soul”, out on June 11th. Both albums are released by Napalm Records, by the way. We had an email conversation with Sonia about how she was asked to form CRYPTA by Fernanda and Luana and about the debut album, naturally. 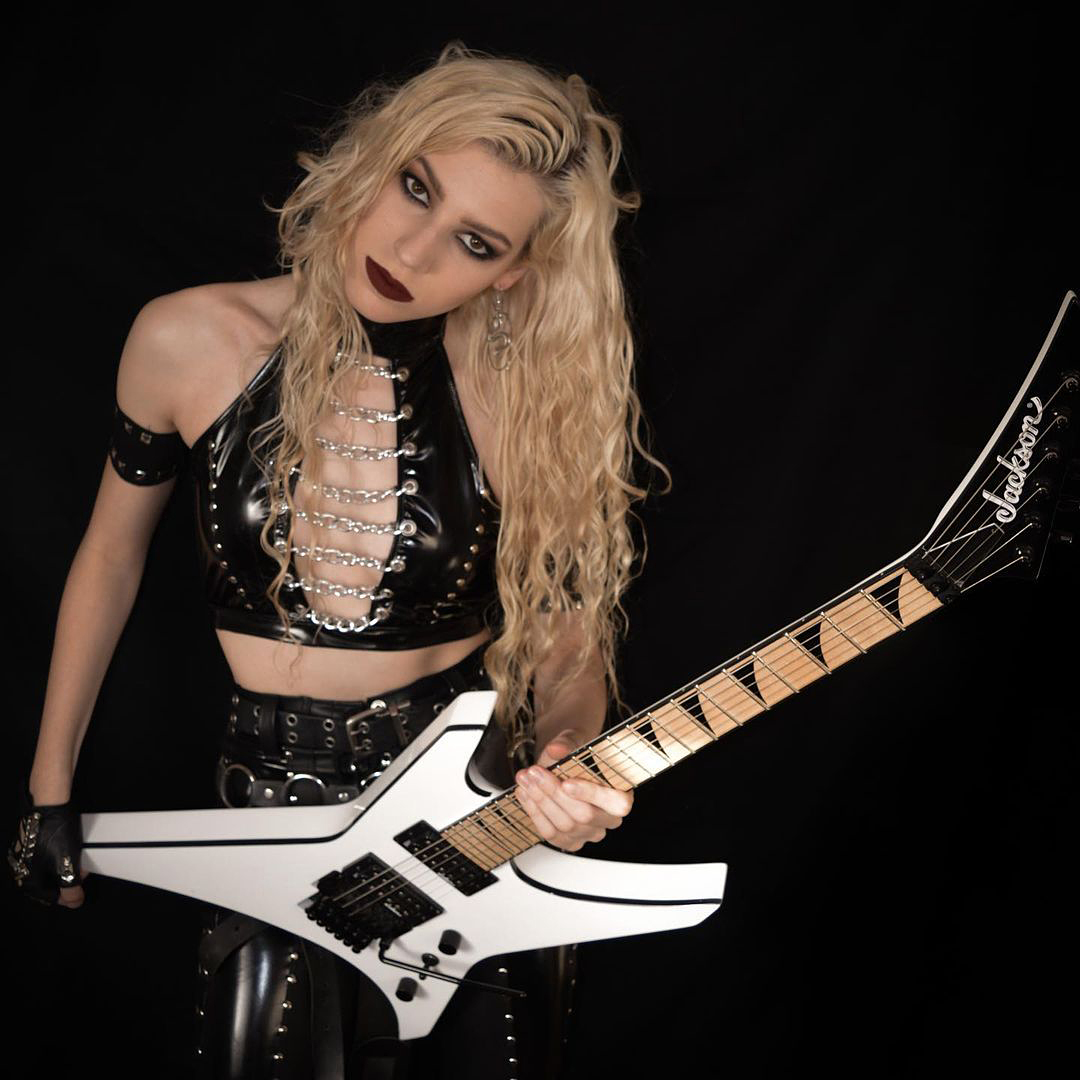 Hello Sonia, normally we do an interview with the vocalist of a band, but this time I thought let’s make it a Dutch get-together and we do it in English.

Aww yeah! Thank you so much for having me! Looking forward to your questions.

First something about your last name, Anubis. In the Dutch band Cobra Spell and in Burning Witches you use(d) Nusselder as your last name. Can you help us out to solve this misery?

In Cobra Spell I am actually using Sonia Anubis. In Burning Witches, my name was noted with my second name for the reason that the band didn’t allow me to use Sonia Anubis, that sucked.

In 2019, you were asked to become CRYPTA’s lead guitarist. However, at that time you were still part of Burning Witches. How did the other Witches react to that? Did they put a death spell on you or wanted you to burn at the stake?

I got the invitation a year before I left Burning Witches, and I remember it very well – I told them about this band straight away. They were completely okay with it. Just when the band was announced publicly and everyone was very enthusiastic, something snapped with them. I honestly have no idea why.

By the way, were you surprised when you learned that Fernanda Lira and Luana Dametto had left Nervosa? And how surprised were you when they asked yóu to join CRYPTA?

I was surprised when they left Nervosa. And for them to leave Nervosa is completely unrelated to us starting CRYPTA. Also, I was honoured to get invited to be part of this new project back then, that now became CRYPTA. Certainly because they are very cool and talented musicians, and I always secretly wished I could have played with these girls. And then it happens! 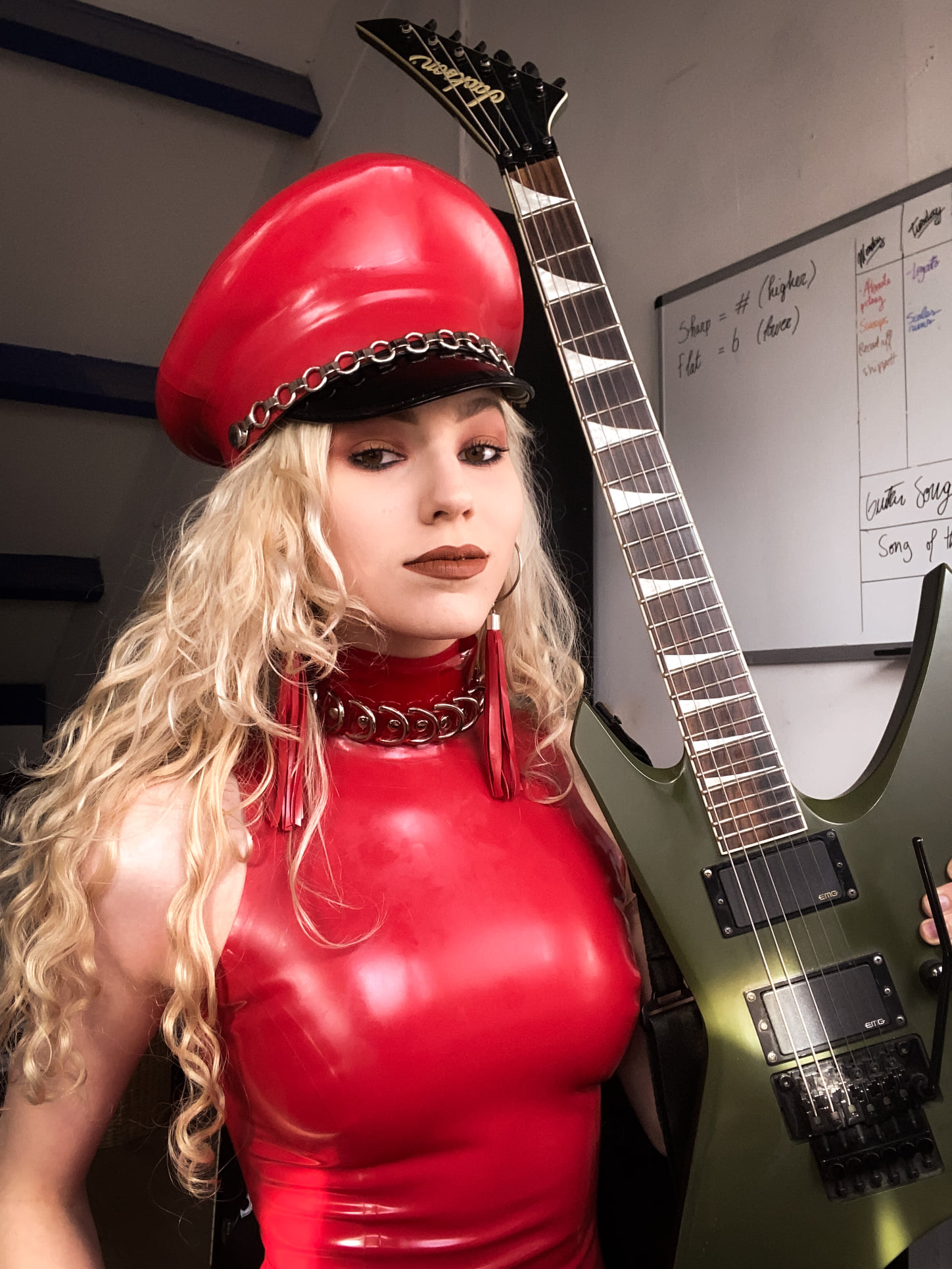 CRYPTA are mentioned as a Brazilian / Dutch death metal band, due to your input. Does that make your Dutch heart proud?

Obviously, Fernanda and Luana were fed up with thrash metal and wanted to do something rougher, death metal. Was this genre switchover difficult for them or did it come naturally and was death metal already in their blood?

Death metal came very natural for us. We all have very varied taste and certainly in death metal there is many death sub-genres that we love, such as: brutal death metal, blackened death metal and the Swedish old school death metal. In this way we were able to implement a lot of different ideas. We had enough ideas!

CRYPTA was picked up by Napalm Records in June 2020 and that makes them stablemates with Nervosa. Will that cause any problems when they put you on the same bill of a festival? Between Prika and Fernanda, for example?

Of course not, there are NO problems or fights between the bands here. We just want to move on, play concerts and have fun playing music, because it’s our biggest passion. And we wish both of our previous bands the very best!

The first thing that came to my eyes was the cover of CRYPTA’s upcoming debut album “Echoes Of The Soul”, but more about that in a while. First the video for “From The Ashes”. Of course, you were used to making video clips with Burning Witches, but how was it for you to do it with CRYPTA?

It was a fantastic experience to record the video for “From the Ashes”! We had such a big production team by our side, the video turned out to be extremely awesome and we are so thankful for our director Andre Gustavo for making this happen.

The official video for “From The Ashes”, according to Fernanda “a song about the ever-changing cycles of life”, is very dark and sinister. As if you are burning your bridges in order to be reborn from the ashes as CRYPTA. I especially like the ominous music during the end credits, but the song will end at 4:46 minutes on the album, I suppose?

The song is 5 minutes and 11 seconds. To find out how it starts and ends, you will have to listen to it yourself. 🙂 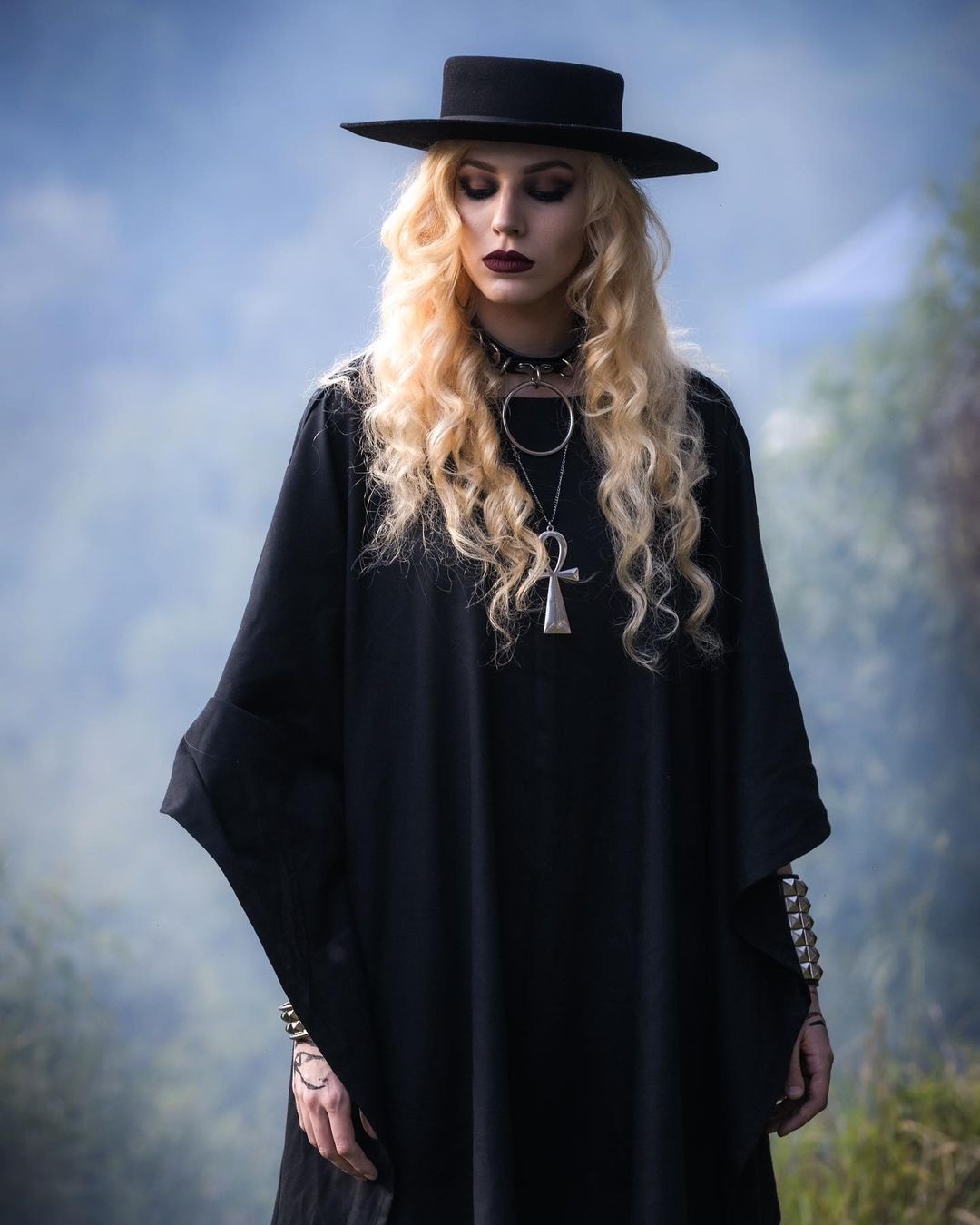 So let’s go to the album. On the cover art are demons, an opened grave, chains… all created by Wes Benscoter. Did you open something like Pandora’s Box, a crypt (referring to the name of the band, CRYPTA) that should have been closed forever? Where did you find Wes?

What is coming out of the coffin is pretty much up to interpretation. Maybe it’s a skeleton or a monster? Maybe it’s a puppy? Haha, no… To me, it’s the echoes that are coming out of the soul. The echoes as light and the coffin as soul. We chose for Wes to visualise our cover since he has an amazing, very horroresque way of painting and it would fit the concept/idea that we had perfectly. We knew about him since he has painted for many cool bands such as Nile, Vader, Hypocrisy and the list goes on.

How did the writing process of the 10 songs on “Echoes Of The Soul” go? Who did what? And how about the recording of the album, whereas 3/4th of the band lives in Brazil and you are the only Dutch girl?

The writing process of the album was fruit of the teamwork in the band! Even though, the album was almost finished when Tainá joined, so most of the work has been written by myself, Fernanda and Luana. We composed at a distance, recorded our ideas with either Reaper or in video recordings and we put them in Google Drive to share them with each other and eventually put them together to make a song out of it. I would setup all the demo’s from my home in The Netherlands, since I have a very DIY little studio here!

Can you fill us in about some of the tracks on “Echoes Of The Soul”? Especially the ones you like most and want to perform live? And since we are going to review the album, what can we expect from it?

My favourite songs are “From The Ashes”, “Dark Night Of The Soul” and “Shadow Within”. From “Echoes Of The Soul” you can expect a hybrid combination of different death metal subgenres such as the brutal, the blackened and the old school. Done with passion for the music. With a balanced amount of melody, feeling and rhythmical brutality.

I bet you’re looking forward to June 11th, when the album will be released via Napalm Records. What are you going to do in the meantime? Practicing your solos? Guitar lessons? Promotional stuff? Other things?

There is a lot going on behind the scenes that I cannot reveal, but aside of that – I am focusing on giving a lot of online guitar lessons, practising, writing music for either Cobra Spell, CRYPTA and random fun stuff, guest spots, my YouTube channel… The list goes on, everything that is music related is something I enjoy doing in the meantime!

Final one, and I want an honest answer from you. Who do you miss most from the Witches? Laura, your Dutch companion?

I don’t miss anything from being in that band, if only, I just look back with a smile at the fun festivals and concerts that I have gotten to be part of with them. But I know it is going to happen again with CRYPTA and Cobra Spell! Yeah!