Dutch death metal band SISTERS OF SUFFOCATION started in 2014 as an all-female outfit, as the name suggests. But with bassist Tim Schellekens and drummer Fons van Dijk in their ranks now… well, we just had to ask why it is no longer an issue. We also wanted to know something more about their third album “Eradication” that was released on November 25th. The concept, the singles… We put it all in this interview with Simone van Straten, guitarist of the three SISTERS and two BROTHERS 🙂 OF SUFFOCATION. 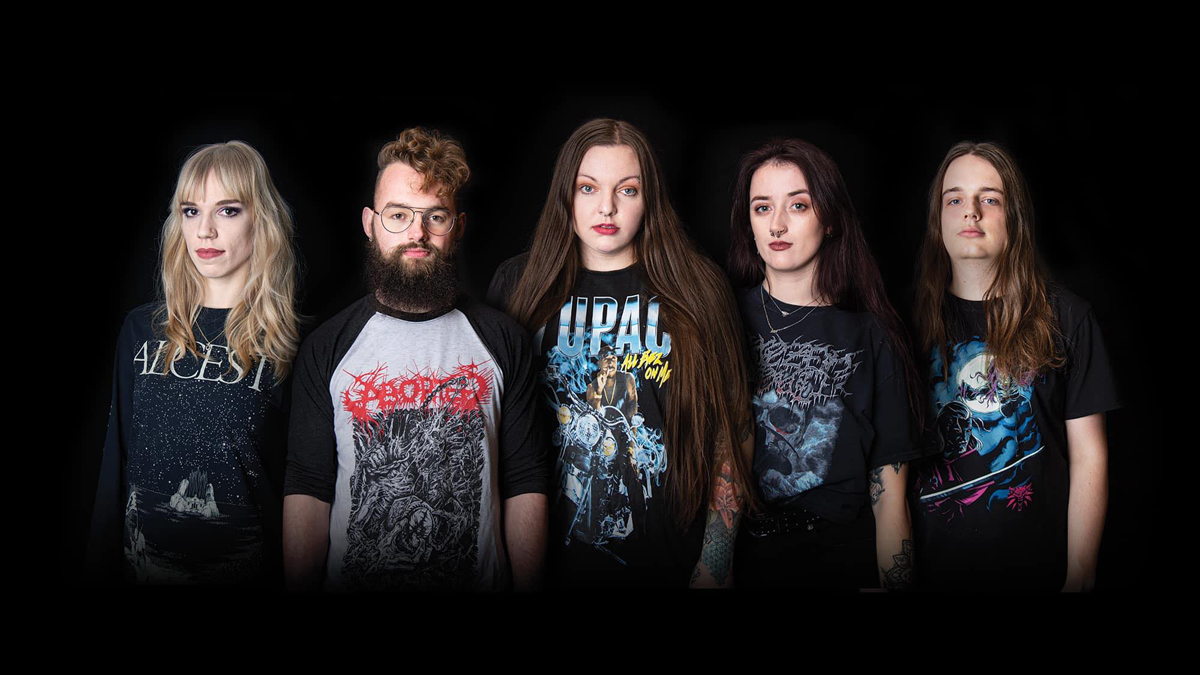 Simone, you started SISTERS OF SUFFOCATION in 2014 with vocalist Els Prins as an all-female Dutch death metal band. In 2022, you have two blokes in your ranks, bassist Tim Schellekens and drummer Fons van Dijk. So the all-female thing is no longer an issue?

It never was an issue. We started as a group of friends, who took different paths later in life. With Fons and Tim we are on the same wavelength, it’s great to work together.

You also played live with Burning Witches and Nervosa as a stand-in. How do you look back on that?

It was a great opportunity to join them. It was a challenge to learn a lot of songs in a short amount of time. They are all lovely people who make great music and I enjoyed playing with them very much. 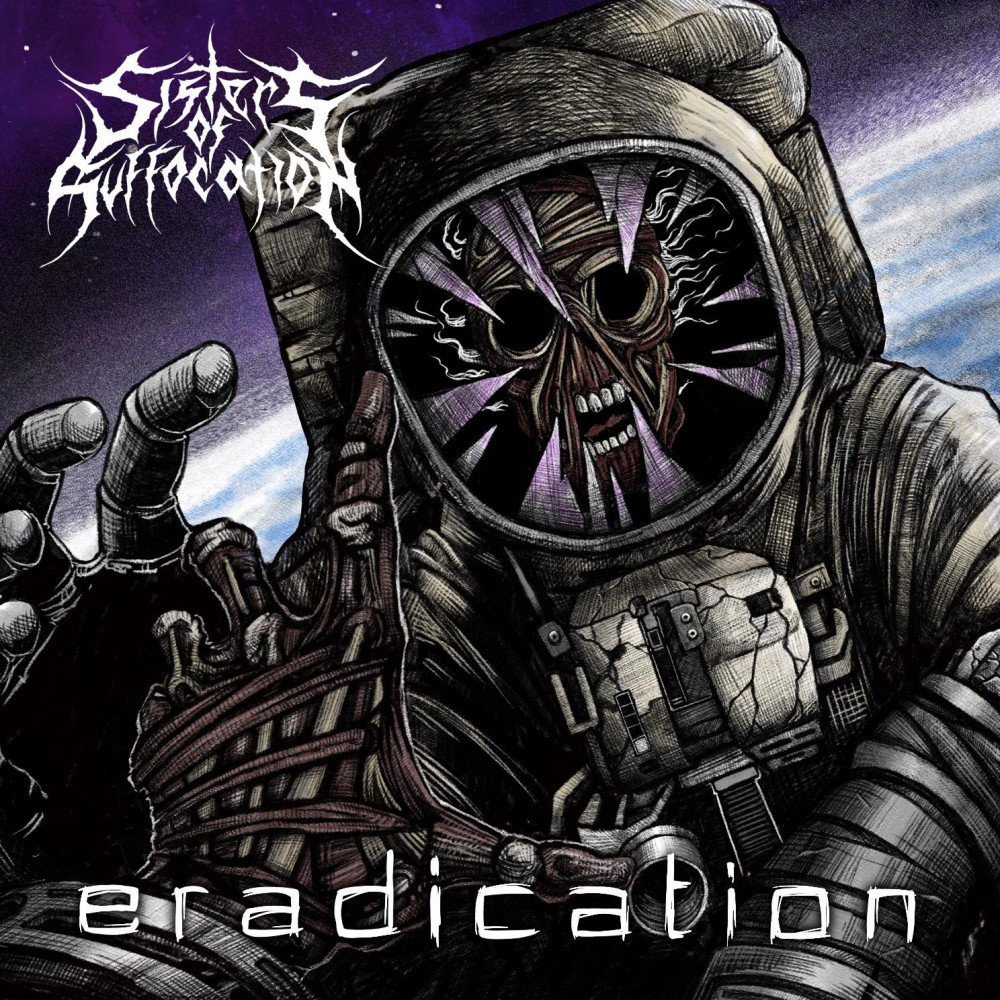 Let’s talk about the new album “Eradication”. How was the release date on November 25th? Did you guys do anything special that day?

It was a relieve to finally release this album after the COVID constrains. We worked hard to deliver the best possible experience to our fans. After the busy weeks of signing and sending all the crowdfund packages, I could really enjoy the positive reactions of our awesome supporters.

You describe “Eradication” as “This concept album tells tales about a mutilated world, and how people might endure that world”. On the cover of the album we see a dead astronaut. Is the album a warning to all humanity? Are we on a disaster course?

The new album is a spinoff of “Humans Are Broken” (2019) where the world as we know it is ending. The album “Eradication” tells the story about rich people being able to buy safe places in outer space. The middle class can build bunkers for surviving while the poor people are doomed and need to live on the street to meet their soon to come death. I think this is one of the many possibilities for the future. I like to see the album as a message to think about how we should treat the Earth.

The album is going full speed ahead with “Buried In The Crowd”, the first single and video off the album, and “Die Anyway”. Both have an interesting twist: an almost child-friendly bridge in the first track and simultaneous clean/harsh vocals and a spoken part in the latter.

I like the contrast between the heavy music and the clean vocals. It’s more melodic while it keeps its power.

You also say about the album that: “The sound […] is a mix of old and new school death metal”. Name two songs on the album (of each one) where this is coming to its full potential.

“Thick Red Meat” is old-school due to the tempo changes, fade out and the “headbangable” (new word) parts. An example of the more new-school sound is “The Rich Will Never Die”, which includes clean parts and a progressive outro.

“I like to see the album as a message to think about how we should treat the Earth.”

Destruction guitarist Martin Fury can easily be seen as the sixth member of the SISTERS OF SUFFOCATION, as he produced all your albums so far. What is his influence when you are in the studio recording?

He is an enthusiastic person who knows how to motivate any musician. If any song needs a small change, he is our guy to point it out. Like additional lead lines and harmonies. It is great to work with him.

The second single off “Eradication” was “Pay My Dues” and had an official visualizer video. It starts surprisingly peaceful with Els using clean vocals.

Els started grunting when this band was formed. Before this band she only used her clean vocal style. However, she became skilled in both singing styles which is a shame to not use it in our music. 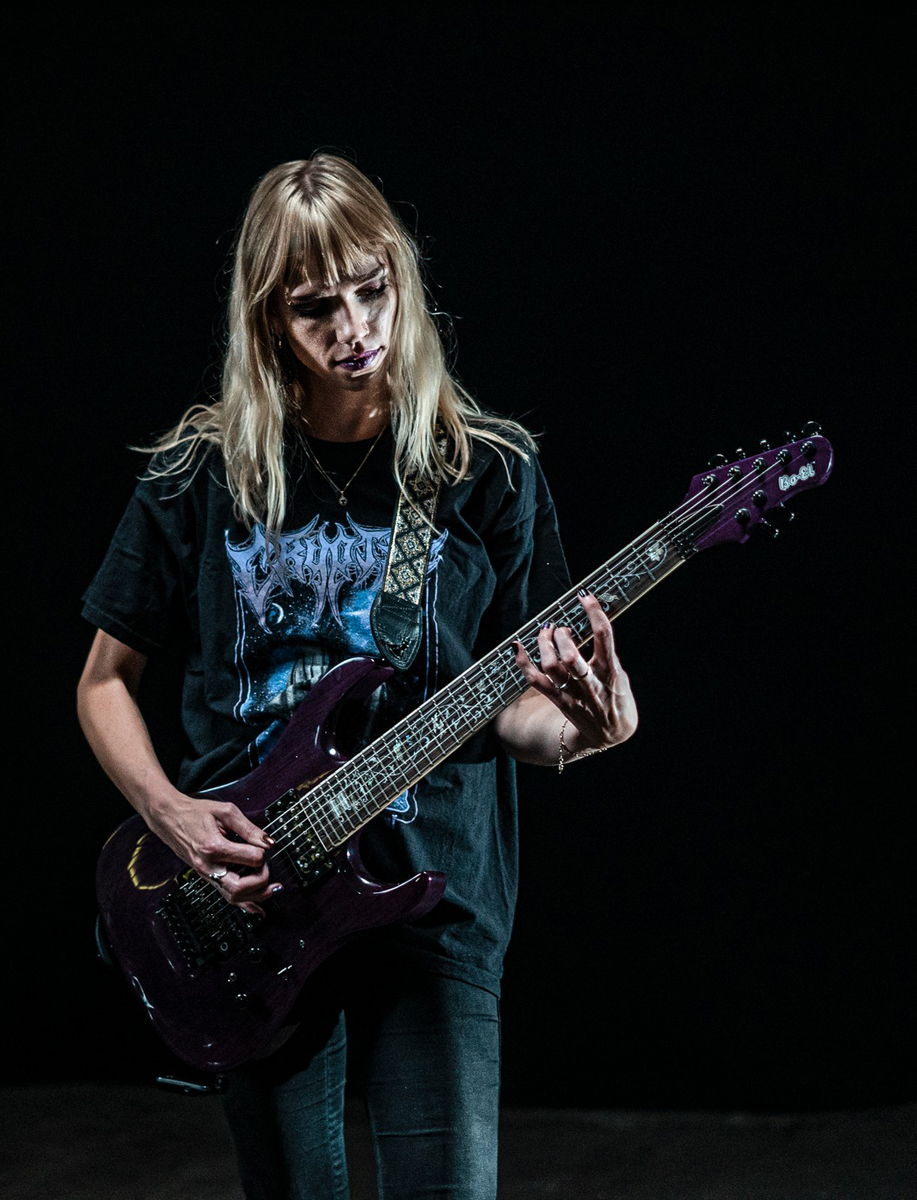 We skip a few tracks and are moving to the instrumental “Elevation”. What is the function of this one and was it meant to be on the album from the beginning or did you add it later on?

The song gives a moment of peace between the heavy tracks. It is located on the album between the chapters of the poor / middle class on Earth and the rich people in space.

Did you use the same guitar while recording your parts for “Eradication” or was there a variation in string instruments?

Almost all songs are recorded with the same Bo-El MC7 guitar with two exceptions. For “Pay My Dues” I used a 6-string guitar because it is tuned in standard E. For “Outerlude” I used one of my acoustic guitars.

Next up is “How They Bleed” with clean vocals on the calmer parts and growls on the faster riffs. A good moment to give the neck muscles some peace during concerts?

We thought it a was a fun idea to step out of our comfort zone. The fun part is that we still laugh about this song because it is the only one all our mothers can appreciate.

The third single from “Eradication” is “Cordon Sanitaire” and has an official visualizer with live footage. Too bad the album cover is blocking a big part of it. What can you tell us about this track?

This was the first track I wrote at home, a long time ago. The song is inspired by Nile. I remembered that I want to write a song with lots of melodies and harmonies without losing power.

After the short 15th track “The Chosen One”, with maybe the highest number of beats per minute, comes the album closer “Outerlude”, another instrumental that almost sounds as an ode to the extinct mankind. What does it stand for according to you?

In my point of view “The Chosen One” is one of the endings of the album with a happy end. “Cordon Sanitaire” is an album ending where everybody dies. Depending on the end, humanity will go on or stop existing. “Outerlude” gives me the vibe that, regardless the end, the universe will go on but with a slightly sad message.

Final question: now that “Eradication” is finally out, how are you going to promote it?

As you might know, we did a crowdfunding for this album which made this album possible but is also a great way to promote. We are planning as many shows as possible where we will play mostly new songs. We also created a limited edition LP which is already sold out within a day after the release. New clothing is created, playthroughs are being made which you can expect any moment on YouTube.