For those of you who are regular followers of the various female fronted rock & metal Facebook pages that are circulating on the internet will have become familiair with the phenomenon Mikaela Attard, artist name MIKAELA. She has posted numerous messages with as many photos. MIKAELA debuted with the singles “Bring Me Blood“ and “Chaotic Mind“, followed by the release of the full-length album “Nocturne In Red“ in 2020 and an incredible official short film / music video “Nightmare” last year. This lady in red knows what she wants, so be warned, you don’t mess with MIKAELA! 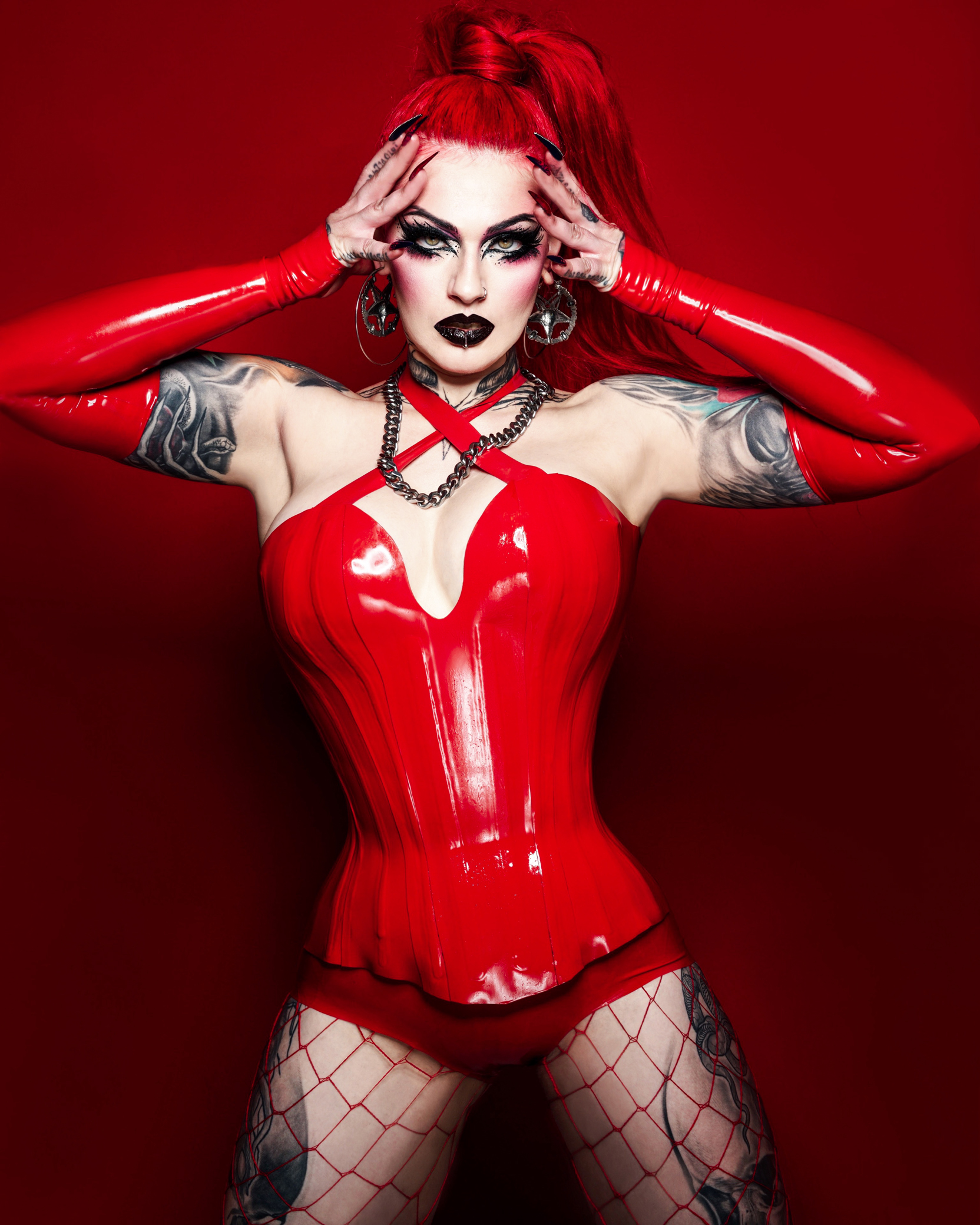 LET’S START WITH A SIMPLE, BASIC QUESTION. WHO IS MIKAELA?

Hey Henk and everybody! Well, it’s a little hard to reply to this question shortly, but in a nutshell: I am me. Unapologetic me. All me. With the music from this project, it’s my works and my collaborations with other musicians. Read more here: www.mikaelarocks.com

YOU STARTED VERY YOUNG WITH CLASSICAL SINGING (8) AND PIANO PLAYING (9). BUT WHAT YOU ARE DOING NOWADAYS WITH YOUR VOICE IS COMPLETELY DIFFERENT. CAN YOU TELL US HOW YOUR VOICE DEVELOPED OVER THE YEARS?

Yes, I did start with classical training in both my singing and my piano playing before I moved on to rock and jazz training at Berklee College of Music in Boston, MA (USA), where I later graduated with Summa Cum Laude BA degree in Music Production. Awesome times! I actually still use a lot of techniques from this stage of my life to this day in growling and screaming. I mean, I still sing too everyday as I don’t see genres as boundaries at all, or in this case things learnt through a genre. But rather it’s all a continuation, a build up, an accumulation of skills and things that you get to learn along the way until you become more and more yourself everyday. I think we, as individuals, tend to have and maintain a particular style, our unique style, and develop that style as we go along and not a genre per se, because having a particular style of doing things could go with any genre. 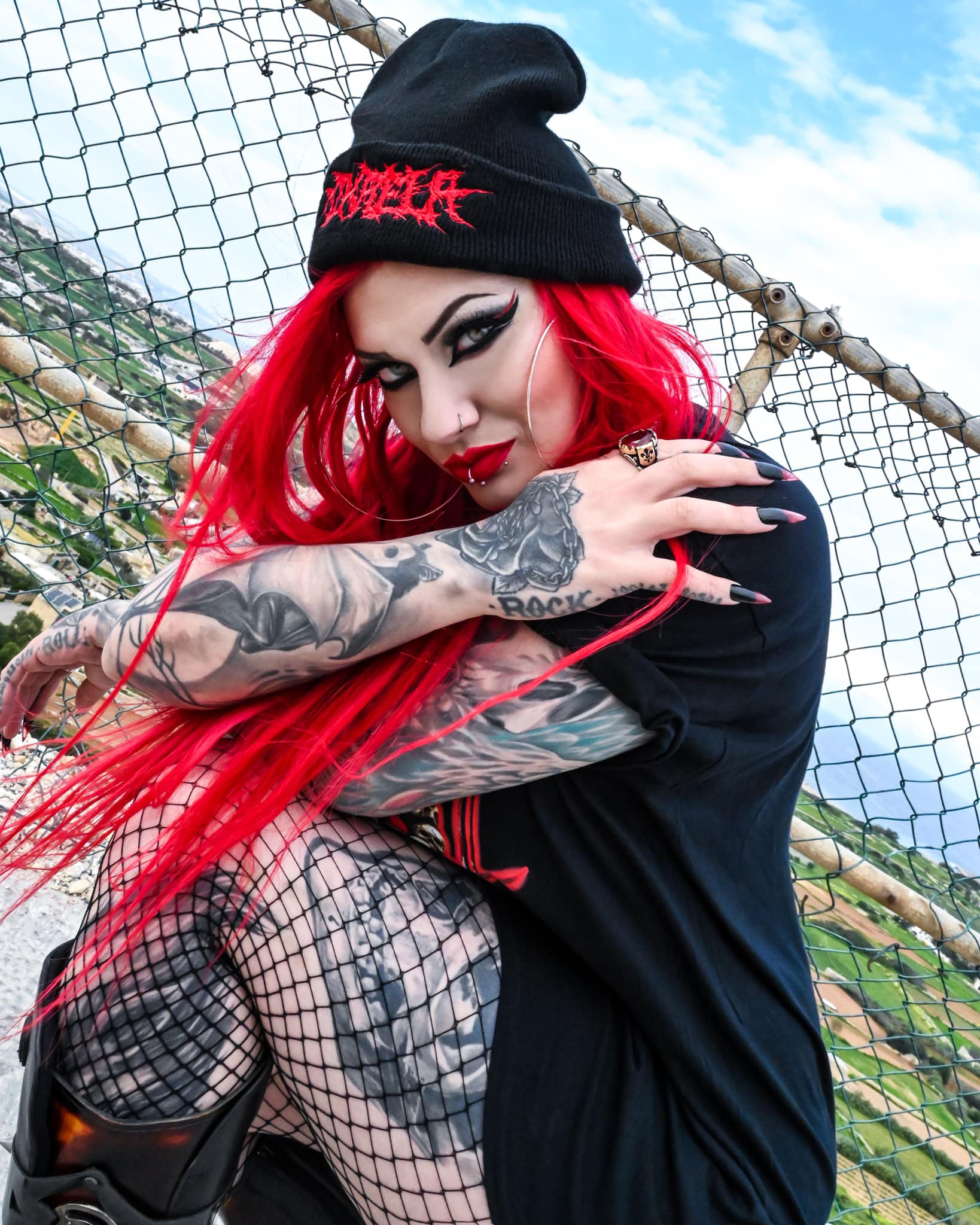 SOON AFTER YOU STARTED YOUR SOLO CAREER AS MIKAELA, YOU RELEASED YOUR FIRST SINGLE “BRING ME BLOOD”. IN THE PROVOCATIVE VIDEO CLIP, YOU’RE QUITE EXPOSING YOURSELF. DID YOU GET ANY NEGATIVE REACTIONS ON THAT VIDEO?

First of all, the video clip is not provocative and no I did not expose myself in ways you’re suggesting. I am myself and I’m not afraid to be. I am honoring the female body as a woman, like all woman do in their ways, and if people feel offended, that only cries insecurity and that is something they only can control and deal with. Once that is shaken off, things could be seen for what they really are. As an artist, I promote confidence, taking the initiative and stay driven and going for things just how we want them by leading by example. So no, there were no negative reactions or feedback as those who hint and suggest that there is in their words, simply do not get it and I suggest to either allow growth within or to move on with other things. The right word for “Bring Me Blood” would be unhindered, to have no limitations and to not give a damn about what people think us as individuals. Authorities sell fear everyday, this is me not buying it and suggest everyone to do so too.

CAN YOU EXPLAIN THE LYRICS OF “BRING ME BLOOD”? WHAT EXACTLY ARE YOU TRYING TO CLARIFY WITH THIS SONG?

When writing a song an artist doesn’t try to clarify, but actually writes the song to communicate truly. When it’s from the heart, or happens to touch so many, it actually is an amazing medium where alike minded people or simply people from all walks of life come together and can connect and resonate with together even if apart. It takes a lot for an artist to tell them they’re trying. They’re actually doing and expressing emotions to the public for real. “Bring Me Blood” is about a true experience I’ve had where I was the victim of an attempted murder and felt sick at the justice system for how it handled it. “Bring Me Blood” the phrase itself is of course a metaphor, basically meaning: so give me anything, I’ll conquer.

IN 2020 YOU RELEASED YOUR DEBUT ALBUM “NOCTURNE IN RED”. WITH WHOM AND WHERE DID YOU RECORD THIS ALBUM?

I wrote and produced all the music and lyrics of the album at my own studio in Malta. We recorded all instruments, guitars and bass by Kyle Farrugia, all vocals and backing vocals by myself, all keys, synths, effects, arrangements at my studio too and Marco Minnemann’s drums in San Diego, CA, USA. The album was mixed and mastered in Denmark with Tue Madsen. 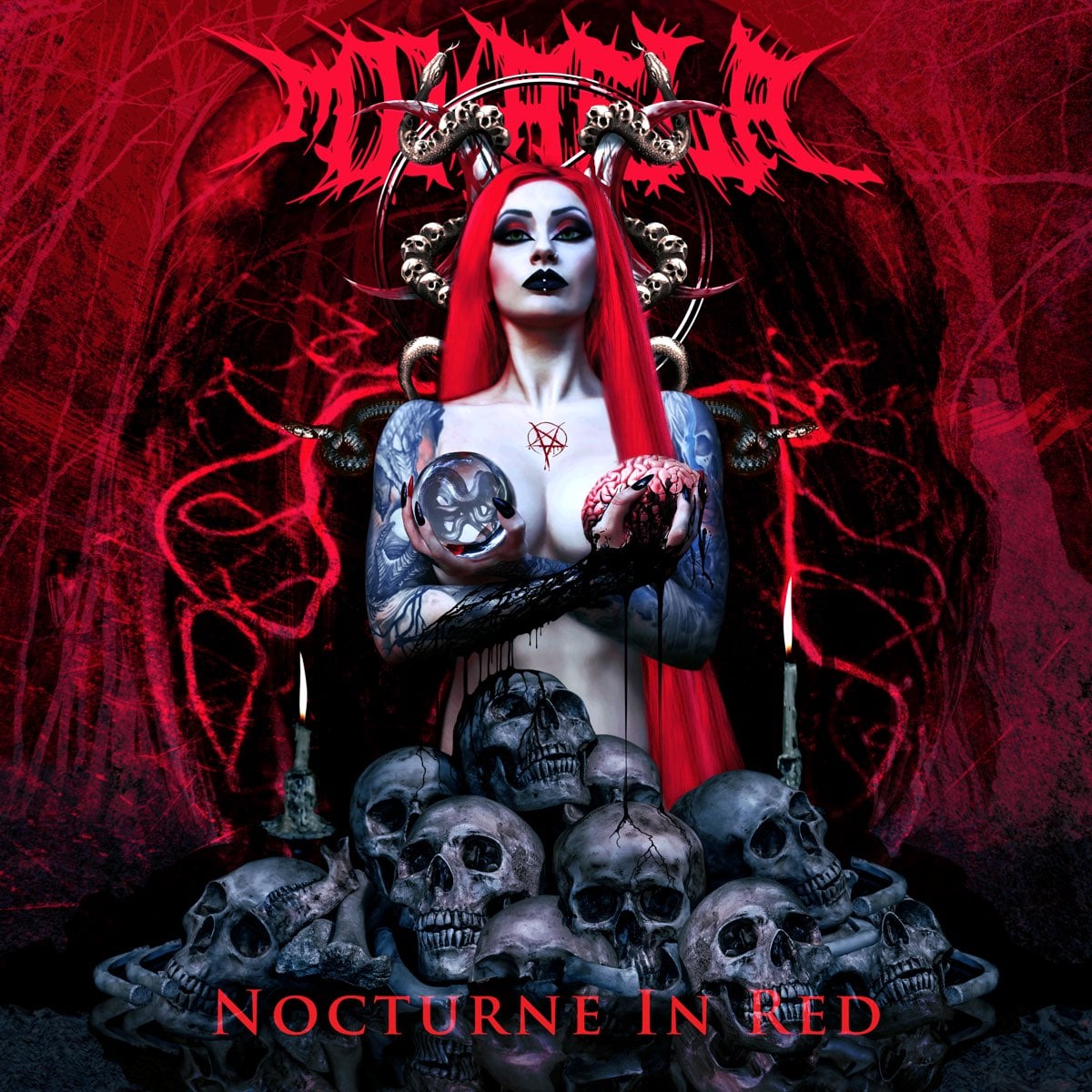 IN ANOTHER INTERVIEW, YOU MENTIONED THAT “NOCTURNE IN RED” IS A CONCEPT ALBUM ABOUT DIFFERENT STATES OF THE MIND. CAN YOU GET INTO THAT A LITTLE BIT MORE?

The songs deal with different states of mind I had at the time of writing that everybody else has and experience at some point in their life really. I transferred those emotions I felt earned from my own true stories that happened to me into songs. Every story produced a different theme or aspect really. These stories brought to life different songs for this album, and it felt whole and I felt whole once this album was released. It is all one nocturne and this one was in red, a particular tonal vibe, a code I felt all throughout the works. So stoked that the people are resonating with it so much! Thank you!

BEFORE THE RELEASE OF THE ALBUM, A SINGLE AND VIDEO FOR “CHAOTIC MIND” WAS DROPPED. IT SEEMS THE VIDEO WAS INSPIRED BY HORROR MOVIES. WHAT CAN YOU TELL US ABOUT IT?

I love horror movies! I like a lot of things and topics, but I’m a bit of a crazy fan of haunted, horror, blood, serial killer, paranormal, energies, witchery kinda stuff actually. So yeah, kinda let that dog loose for that one.

HOW WAS THE FEEDBACK TO “NOCTURNE IN RED” FROM THE PRESS AND FANS?

Awesome! There are a lot of great reviews coming out of anywhere really and am super stoked by all this for real. I thank everybody for their love and support! Means the world!

THE ALBUM WAS ALSO RELEASED AS A 12” LP EDITION IN TWO VARIATIONS: THE DEVIL’S EYE (YELLOW SPLATTER) AND BLOOD MOON (RED MARBLE). HOW IMPORTANT WAS IT FOR YOU TO HAVE THE ALBUM OUT ON VINYL AS WELL? 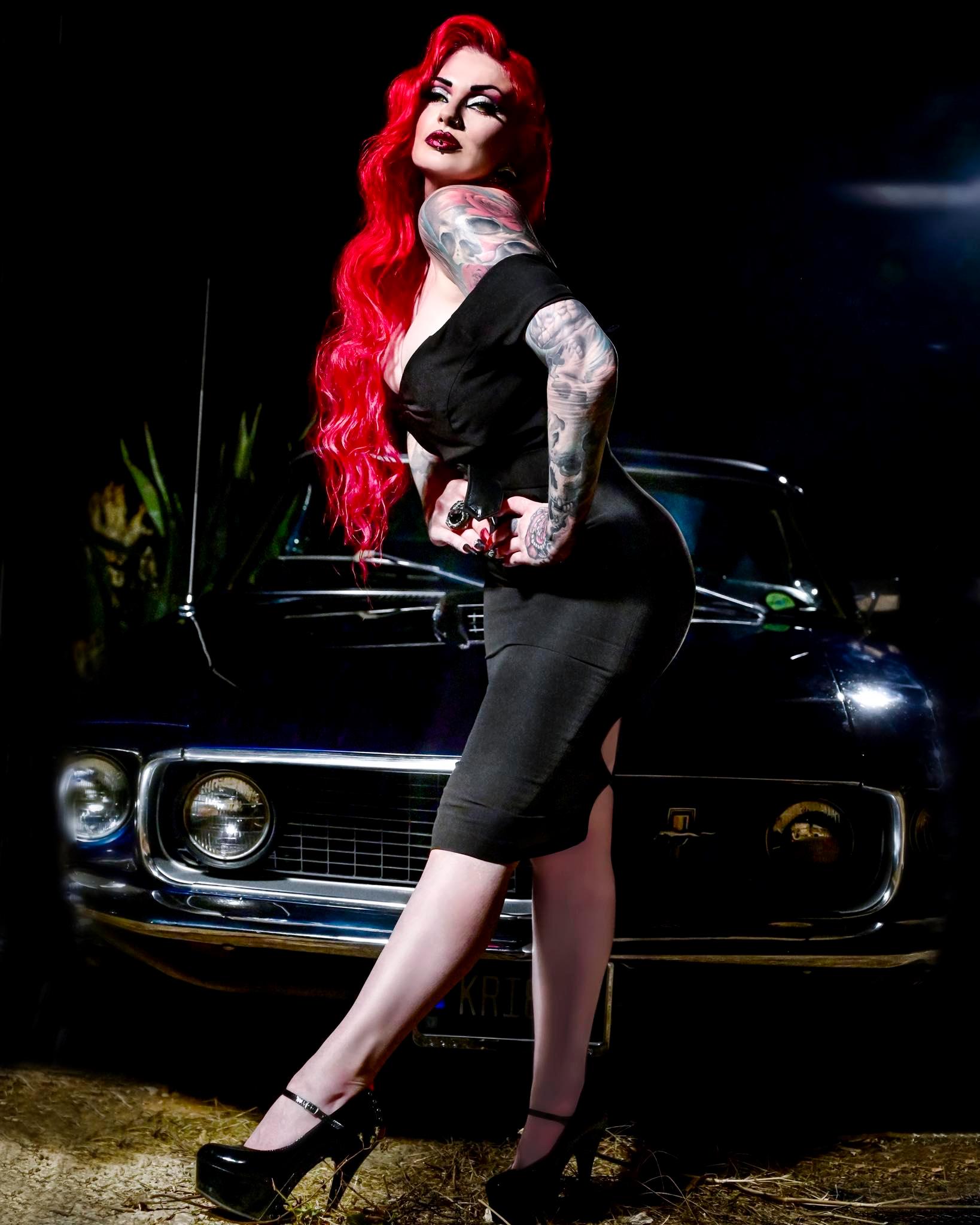 I am a vinyl fan myself and I always wanted my music to be also produced on vinyl too. When fans started asking for vinyls, I thought to go ahead with the decision of a vinyl production and make some badass versions of it too! They’re super cool, I’m so in love with “Nocturne In Red” vinyl variants myself! You can purchase yours here: mikaelarocks.com/store

ON SEPTEMBER 17TH OF LAST YEAR, YOU AND YOUR BAND PLAYED A HOME GAME AT THE MALTA ROCKS FESTIVAL. HOW WAS IT TO BE BACK ON STAGE AFTER ONE AND A HALF YEAR?

It felt great and it felt even greater to have the new album being performed live for the first time with the band for the public!

YOU’VE RELEASED TWO TRAILERS FOR “NIGHTMARE”, BUT WITH THE RESERVATION THAT YOU WILL ONLY PUBLISH IT AFTER THE ‘20K FOLLOWER MILESTONE’ WAS REACHED.

“Nightmare“ the short film is actually out now! I thank all the cast and crew for being part of this, it was so much buzzin’! You can watch it here: https://youtu.be/kmIZDjNjNas