Even now, we’re still trying to come to terms with what was known as “the witch trials”, that heinous period of time when thousands of women – and men – were tortured and killed to rid the world of “witchcraft”. Just this August, the final woman convicted in the Salem witch trials was at last exonerated. The sophomore album by the Swedish symphonic metal band HEXED, “Pagans Rising”, specifically recalls the witch hunts that took place in Sweden in the 17th century. About 400 people were executed ; the last case occurred in 1704. Most of these trials, more than 300 of them, happened between 1668 and 1676, a time known as “The Great Noise”. The most famous of these was the Torsåker witch trials in Ångermanland, when 71 people, including 65 women, were beheaded and burned at the stake on June 1, 1675. 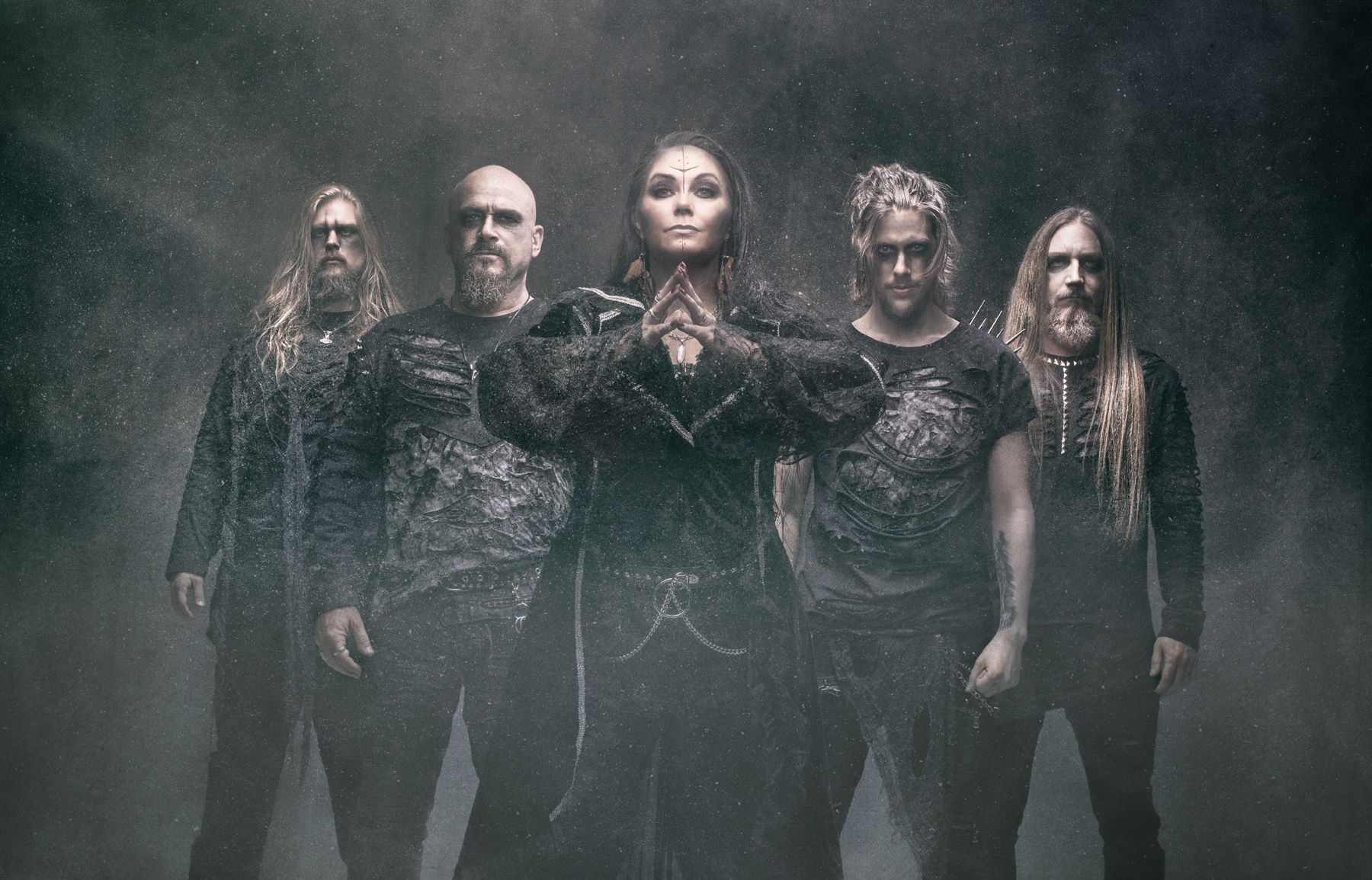 So it’s a concept album, relating not so much an exact story but exploring a theme: condemning those who perpetrated those atrocities in the name of patriarchal religion.

“The background is the Hexenhammer (the German treatise on witchcraft published in 1486 ; it urged the torture and burning of those accused of witchcraft) and that came along into Sweden as well”, Tina says in a phone interview. “This album, it has a story, but it’s not in a storyline. With the LP, for example, it comes with two booklets, one with the lyrics and one with small stories that tells about every song. It dramatized it and also added some fiction to it as well, because I wanted it to get the right vibe… so that it would be more interesting to read about”, she adds.

“We wanted to think about how people listen and how we ourselves are listening to music and records”, she explains. “For that reason, just to keep it dynamic and not have similar songs next to each other, we decided to let the storyline go. We felt that the dynamics of the record would be more important”.

It comes four years after the band’s 2018 debut album “Netherworld”.

“After the debut, we started to gig a lot, both abroad and in our country as well”, Tina says. “For 2018 and ‘19 and ‘20, what was left of it, we were on the road. When we realized that the pandemic situation would be for a while, we then decided to just concentrate on making music. In 2020, we started writing for the record”.

She says the band is working on tour plans, including hopefully in the States, but, as she notes…

“The world is somehow on hold again. Because of the economics and the wars and everything, I guess we have to have some patience and ride this one out as well”.

Tina’s husband, singer/guitarist Stellan Gunnarsson, assumes the role of the witch hunters throughout. His harsh vocals assume that mantle of divine, righteous judgment very well. But Tina recalls his learning process was sobering.

“The more and more that he learned from the history – when we wrote the lyrics and also when we read the stories that we found – he was also feeling depressed and uncomfortable. I guess he tried to put that into his vocals”, she remembers.

The latest single, “Stigma Diaboli”, is a story of one of those hunted women. Tina’s desperate, haunted vocal inhabits that poor soul… she IS her.

“I am an empath. I can easily feel what others feel, I am the one that picks up the vibes in the room”, she explains. “This is about two orphaned girls and the little sister dies and the big sister is somehow accused of her death. She knows… if they just catch me, it doesn’t matter what I say or what I do. I just picked up how would I feel if I were in the same place as her at that time: where would I go, where would I seek shelter”, Tina adds. 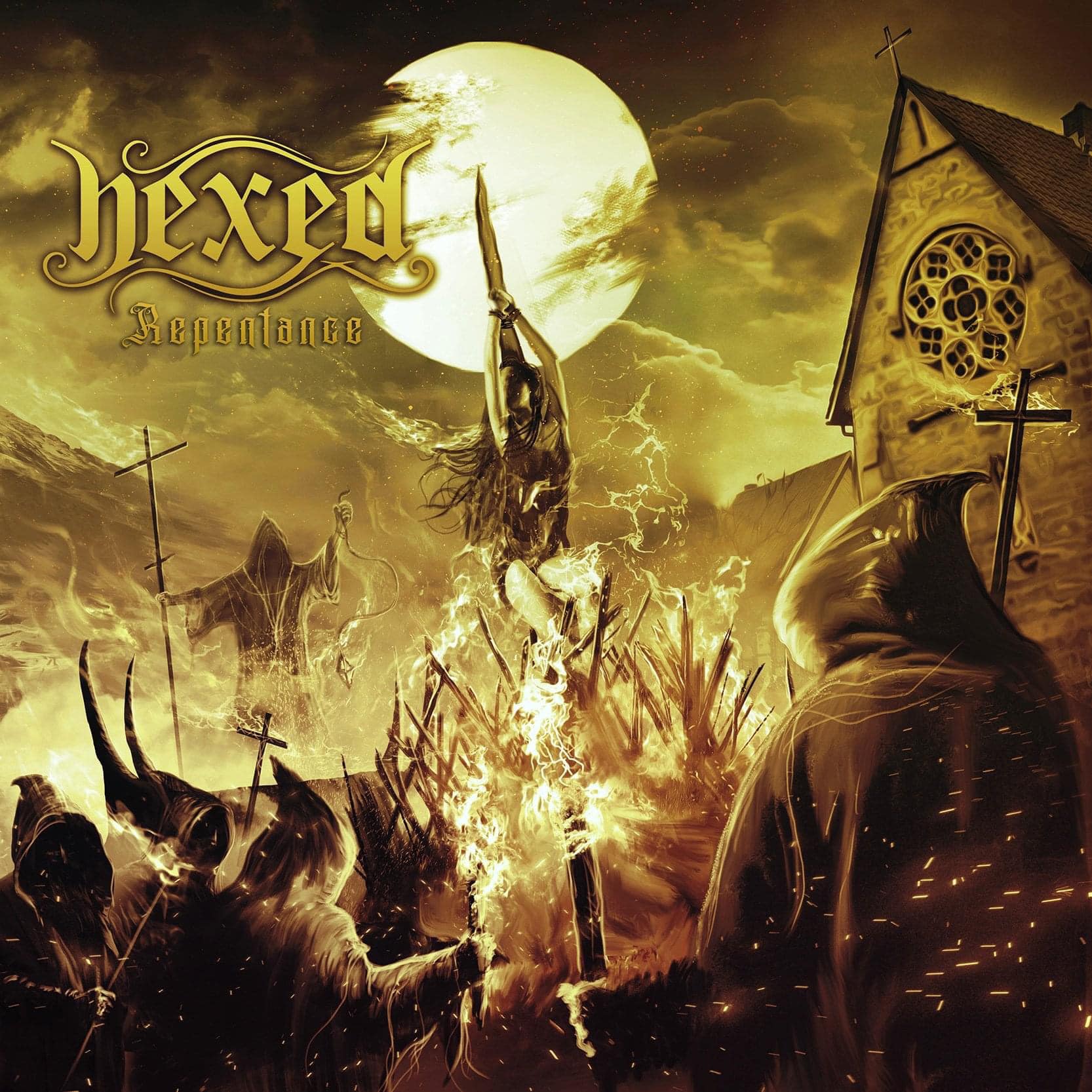 Much of “Repentance” remembers the wisewomen of those times, who “offered privacy” and “offered remedy” – references to their expertise with herbal medicine, including how they often helped with unwanted pregnancy.

“Most of them were strong women – all of them didn’t always need a man by them”, Tina notes. “These women really were like healers or doctors, but they were so independent. They were disturbing the order. There are a lot of these women still today that exist. That was also some meaning in that ‘remedy’ line – I just wanted to put it out that these were loving and caring people”, she adds.

The real sense of ambiguity makes tracks like “Incantation” and “Blasphemy” powerful – that despite what they preached, it was those men of God who were the real evildoers. And they were, of course men, hence her line “All the patterns of patriarchy has to vanish now”.

“With all religions, mostly, it’s all about power, power over people”, Tina says. “It was my intention to write about the men’s power over women”.

In the latter track, Tina describes in carefully-wrought detail the witch trial by drowning – “Forcing me into the water / With this thin layer of ice”. It was claimed that if an accused woman sank, she was innocent.

“It came up in so many of the stories that I read”, she elaborates. “So I just stepped into the role: what would it be like and where would I be and what would I have said. I want you to feel what I feel when I write”.

“There was actually three women in a little parish here in Sweden, called Delsbo – it’s near our summer house, actually”, she says. “They were accused of setting a house on fire ; it was the chaplain’s place. These three women had been jailed for two years before they were executed. It is one woman in particular that I write about”.

Much of what HEXED really did with “Pagans Rising”, on purpose or not, was create an allegory. In relating events of the past, the album also reflects ones that are actually happening now, albeit in different forms, including the attacks on women’s rights all over the world – from the restrictions on reproductive freedom in the United States to the recent killing of Mahsa Amini while in police custody in Iran, which has galvanized protests against that government.

Tina readily admits to being a feminist. “I’m for equal rights. It doesn’t matter if you are a woman or a man or what color skin you have or if you have a disability. I’d like every human being to live their fullest life”, she says.

And even if you take the album at face value, it still works. Actual witch trials are still happening around the world. According to a National Geographic article, men, women and children in Zambia are being accused of spreading HIV/AIDS through witchcraft. In January 2009, a girl was accused of being a witch and burned alive in Papua New Guinea. And in 2005, an eight-year-old girl in London was accused of being a witch by a family member and was horribly abused before she was taken from the home by authorities. So this is not old news.

“No, it’s not”, Tina admits. “My intention with the album was to lift these stories: if you tell the stories, they will not be forgotten so easily. If you know history, I hope it will not repeat itself. But it has”.