A black widow is not only a very venomous spider that can be found throughout the world, but Black Widow is also the title of a Marvel superhero film featuring Scarlett Johansson as Natasha Romanoff. Ánd we have an all-female Portuguese gothic metal band called BLACK WIDOWS, who returned with a brand new album “Among The Brave Ones” after 20 years! We had a chat with the girls, but mainly with singer/guitarist Rute Fevereiro, as she is the only original member since the formation of the band in 1995. 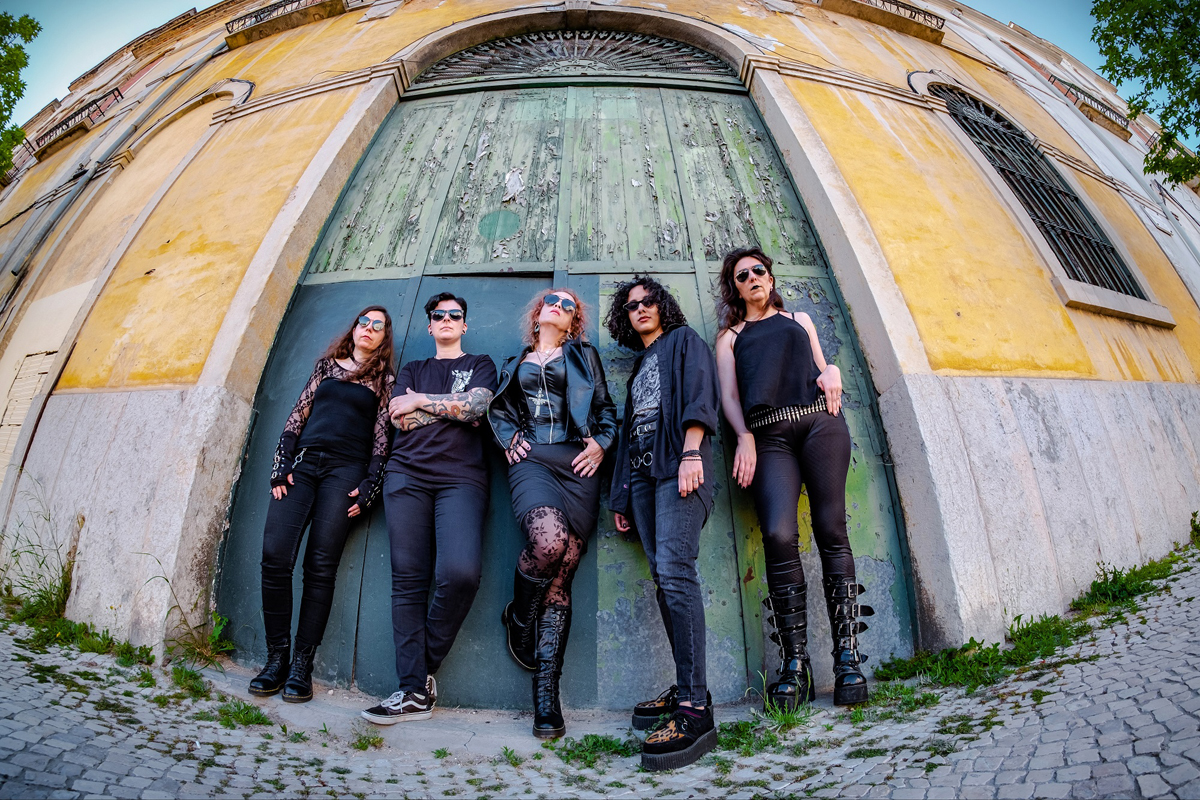 SO WITH WHOM DO WE HAVE THE PLEASURE TO SPEAK WITH?

Rute: Hi, my name is Rute Fevereiro. I’m the singer and lead guitarist and founder of the band. I’ve been a musician for more than 20 years. I also sing in Enchantya.

Íris: I’m Íris Prado, the second guitarist in BLACK WIDOWS, and I’m as old as the band, 27. I had never heard of the BLACK WIDOWS before and thanks to Mónica I’m here now. It’s the first time both playing metal and in a band, and I’m loving it.

Solange: Hi! My name is Solange Campos, I’m 38 years old and I’m the band’s bassist. I spent several times in female rock bands. At first, I only dreamed of having a band of rock and, when I managed to form a band, I began, months later, to idealize mentally a female rock band. I began to take an interest in a movement revolutionary who were born in Olympia, USA – Riot GRRRL – this movement that proclaimed the women’s rights and of it were born several very irreverent bands with elements of the female snares such as L7, Bikini Kill, Babes In Toyland, among others. In 2008, I started playing at Bellenden Ker, a band with only feminine elements and a psychedelic sound with grunge to the mix. Later, in 2011, I joined Rockalady, another band just from women who play versions of pop/rock music. In 2013 I was also part of a band of light rock originals with male elements, the Subic Bay, and in 2018, at the invitation of vocalist Rute Fevereiro, I became an integral member of the BLACK WIDOWS.

Mónica: Hi, I’m Mónica Rodrigues and I’m the keyboard player for BLACK WIDOWS. I bring melody and some melancholy (hopefully) among all the power of each song.

Marta: Hi! I’m Marta Brissos, I’m the drummer of the band! I’ve been playing since I was16 years old, basically self-taught, and was always into the heavier side of music. I’m mostly into progressive and death metal, but I’ll listen to pretty much anything rock and metal

BETWEEN THE FORMATION OF BLACK WIDOWS IN 1995 AND BEFORE THE BREAK IN 2009, YOU HAD TO DEAL WITH A LOT OF LINE-UP CHANGES. WHY WAS THAT?

Rute: That’s a nice question. There aren’t much female musicians in Portugal who like to play metal, and it’s even more difficult to find musicians willing to prioritize the band in order to take it seriously enough to bring the best music. I was lucky to finally have a great team after such a long time!

WHEN THE BAND RETURNED AFTER NINE YEARS OF INACTIVITY IN 2018, MÓNICA YOU REJOINED BLACK WIDOWS. HOW DID RUTE CONVINCE YOU TO COME BACK?

Mónica: I didn’t need much convincing! We bumped into each other at another concert, she said something like “Let’s put the band back together. I’m up for it if you are”. And I tought about it for a while and it just made sense. We had a great time before and the will to work on the same direction once and with a few more years of experience with other bands I was sure that it would be even better.

WHEN DID YOU START TO WORK ON YOUR NEW ALBUM “AMONG THE BRAVE ONES” AND WHEN DID INVERSE RECORDS COME INTO THE PICTURE?

Rute: Well, some songs are as old as more than 10 years, however some were composed in our rehearsing room. The older ones, like “Dead Heaven’s Vibe”, “Philosophy Of Fools” and “Among The Brave Ones” were adapted to the band member’s style of playing and also had some changes. I had Enchantya’s second album released by Inverse Records and it was an amazing experience. They work very well. So I showed them BLACK WIDOWS’ album and got a big “YES!”.

“AMONG THE BRAVE ONES” WILL BE BLACK WIDOWS’ SECOND ALBUM IN TWENTY YEARS AFTER THE RELEASE OF “SWEET… THE HELL” IN 2002. DO YOU THINK THE ‘OLD’ FANS WILL STILL WELCOME YOU AFTER SUCH A LONG TIME?

Solange: I think the old BLACK WIDOWS fans are going to enjoy this comeback. We sound a little different but with very current themes and, in addition, I am sure that this new album will also create new fans. The great lovers of rock and metal will certainly like this album.

THE NEW ALBUM STARTS VERY AGGRESSIVELY WITH “BLACK ORCHID”, WHICH IS VERY CLOSE TO A MELODIC DEATH METAL SONG WITH VARIOUS VOCALS AND A SURPRISING SPOKEN CENTERPIECE. EITHER A BOLD OR A BRILLIANT MOVE TO OPEN “AMONG THE BRAVE ONES” WITH?

Íris: I think it’s both a bold and brilliant move. After such a long pause of the band, and after what the whole world has been through, all comebacks need to be a little bold. “Black Orchid” starts telling this “story”, through melancholic lyrics looking back a little at all the struggle and suffering, and through the powerful instrumentals promising something great to come, I hope.

NEXT TRACK “SCHIZO” IS THE THIRD SINGLE TAKEN FROM THE NEW ALBUM AND HAS A VIDEO THAT IS NOT EXACTLY RECOMMENDABLE TO THOSE WHO SUFFER FROM COULROPHOBIA (FEAR OF CLOWNS). THE MAIN CHARACTER REMINDS OF A CROSS BETWEEN PENNYWISE FROM THE MOVIE “IT” AND THE JOKER IN “THE DARK NIGHT”. ARE ANY OF YOU GIRLS AFRAID OF CLOWNS?

Marta: One or two of us might be a little scared of clowns, but for sure no one would back up with the sight of one. We’re all about conquering our fears, after all. As for the clown in the video, it represents how a person can be such a hypocrite by showing a smile on the outside, but being so crude, bad and sad underneath. We shouldn’t be scared of those clowns, they should be scared of themselves.

COMPARED TO THE PREVIOUS TWO TRACKS “AMONG THE BRAVE ONES”, THE TITLE TRACK, IS A LOT SHORTER, BUT AGAIN HAS A SPOKEN PART IN THE MIDDLE AND OPERATIC VOCALS. ALSO VERY REMARKABLE ARE THE BASS LINES IN THIS SONG. DID YOU (CO-)WRITE THIS PIECE, SOLANGE?

Solange: The original composition of the theme “Among The Brave Ones” is by our excellent songwriter/vocalist/guitarist Rute Fevereiro. At the time, the band felt the need to a rest in the middle of the music. It was then that Monica came up with a super melodic idea for that part of the song. I, as a great lover of melodic bass lines, wanted to make a line that went behind the keyboard melody. This creation was made at home, seen that meanwhile we entered into confinement (the album was recorded in the middle of the pandemic). I think the band only heard that line when the producer sent the first master of the album.

“PHILOSOPHY OF FOOLS” IS A BIT DIFFERENT THAN THE REST, MORE MELODIC METAL AND LESS AGGRESSIVE. WHO ARE THE ‘FOOLS’ IN THIS ONE THAT YOU SPEAK OF?

Rute: Actually, fools are everybody who might think differently from us, we tend to find that we’re the ones who are right and lack perspective on things. However, on issues who defy the common sense you might find yourself facing a war to stand for what’s correct.

WHO WROTE AND PLAYED THAT AMAZING GUITAR SOLO IN “ELECTRIFY ME”? WHAT IS THIS SONG ABOUT?

Iris: Well, I wasn’t a part of the band yet during the creation of the album, so of course it was all the band. This song is a little bit about the age that we’re living in now, with so much technology which can make some things easier, but other things start getting harder. For example, real human connections, personal assessment and such. People like what’s easy, we (and I say ‘we’, because everyone can fall into this pattern sometimes, even as a coping mechanism) choose what’s easy and avoid what’s hard. There’s so much evolution in some areas, but in others we’re still the same, if not regressing or declining, precisely because we’re focused on that fast change when the human nature cannot follow.

WE DISCUSSED THE FIRST FIVE TRACKS ON THE ALBUM AND WILL LEAVE THE REST FOR THE FANS AND LISTENERS TO DISCOVER. OR IS THERE ANY OTHER SONG YOU WANT TO TELL US SOMETHING ABOUT?

Mónica: They are all so diverse, it’s hard to single one out. And their process was so different also. I think “Eden Denied” was one of the first created as a group after we got back together. “Forgive To Forget” was one that we worked on for a while in the rehearsal studio. Unlike “Drowning“, that we had to work on while on shutdown because of the pandemics. I believe “I’m A Monster” was created alongside with “Electrify Me“, I feel like they have some similarities.

ABOUT THE BAND NAME BLACK WIDOWS, WHO CAME UP WITH THAT BACK THEN WHEN YOU STARTED THIS ALL-FEMALE METAL FIVE-SOME IN 1995?

Rute: Me and the guitarist Alexandra Figueiredo. We were at the first year of college when we met and our love for the metal music made us go and learn to play the electric guitar. After that we created the band with other musicians. We were the first all-female band playing this music genre and it was very exciting.

BLACK WIDOWS STARTED AS A BAND PLAYING METAL WITH A CHRISTIAN MESSAGE. IS THAT STILL THE CASE IN 2022?

Rute: Everybody has the right to believe in what they want. I am a Christian and a very spiritual person, maybe that could be somehow read in my lyrics. But I would not put a label on our band for our religious or spiritual beliefs.

IF SOMEONE WOULD ASK YOU: “COMPARE BLACK WIDOWS TO ANY OTHER METAL BAND”, WHAT WILL YOUR ANSWER BE?

Marta: In the band, we all come from different musical backgrounds and tastes. So when asked to compare BLACK WIDOWS to any other band, I genuinely can’t do that, because there are so many influences and sounds that we end up with a more specific type of sound that sounds like… well, BLACK WIDOWS! I could say we go from death metal to a more melodic goth metal, but can’t really compare it to anything else.

AND FINALLY THE COMPREHENSIVE KEY QUESTION: WILL WE SEE BLACK WIDOWS ON THE EUROPEAN STAGES AND FESTIVALS NEXT YEAR?

Rute: I really wish that! It’d be a dream come true to meet our fans and show our music. But at this moment we can’t promise more than the fact that we are trying.