Doom metal and stoner rock are not the most favourite genres in the female fronted metal world, but they can always count on a pack of loyal followers. That’s why there are so many bands in these two (often combined) genres that have been around for a very long time. British band ALUNAH, established in 2006, is one of them. On their list of highly acclaimed albums you can find “Awakening The Forest” (Napalm Records – 2014), “Solennial” (Svart Records – 2017) and “Violet Hour” (Heavy Psych Sounds – 2019). On April 15th, ALUNAH will release their sixth album “Strange Machine”, the second with vocalist Siân Greenaway and also the second on Heavy Psych Sounds. We interviewed Siân and asked her how she got involved with doom metal and also we wanted to know a few things about “Strange Machine”. 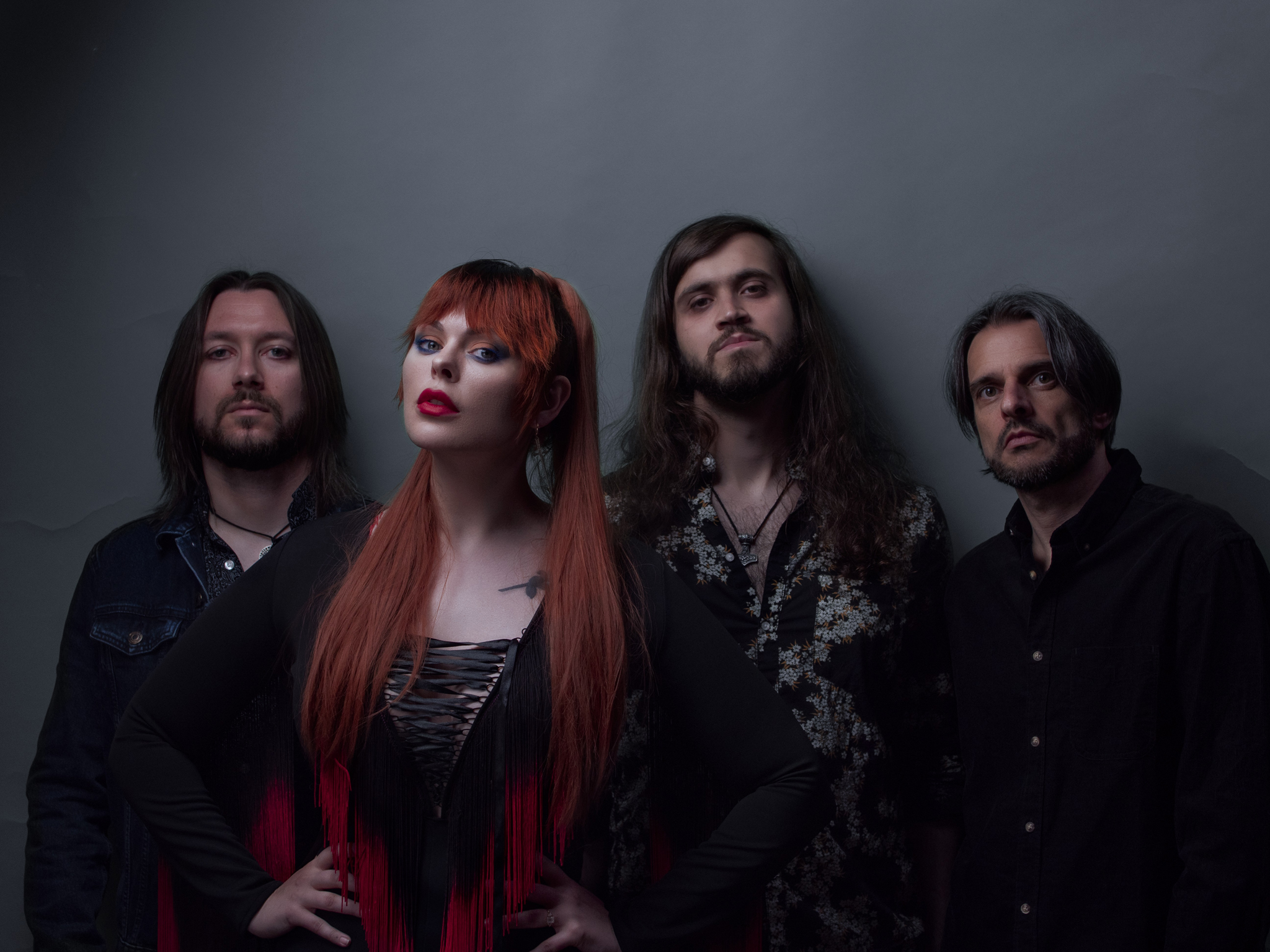 YOU JOINED ALUNAH IN 2017, HOW FAMILIAR WERE YOU WITH THE BAND ALUNAH AND THEIR DOOM METAL/STONER ROCK SOUND BACK THEN?

I saw ALUNAH were auditioning vocalists by chance from a random Facebook post of theirs that a friend of mine had shared. I got curious so thought I’d have a listen. I hadn’t perused anything musically before so I thought to myself “Let’s have a crack at this then” and 5 years later here we are.

YOUR VOICE WAS FIRST HEARD ON THE EP “AMBER & GOLD” WITH THE REMARKABLE, UNEXPECTED CHRIS ISAAK COVER “WICKED GAME”. DIDN’T YOU THINK, WHEN THE BAND CAME UP WITH THAT SONG, “GUYS, REALLY?”

Well considering I came up with it you’d have to ask the others that same question! It’s a beautiful, sensual song and I thought it could sound great sang with female vocals. It’s ended up being our most popular song on Spotify and has become a doorway into people discovering ALUNAH, so I’m very grateful that we did all settle on that song and it will always hold a special place for me. 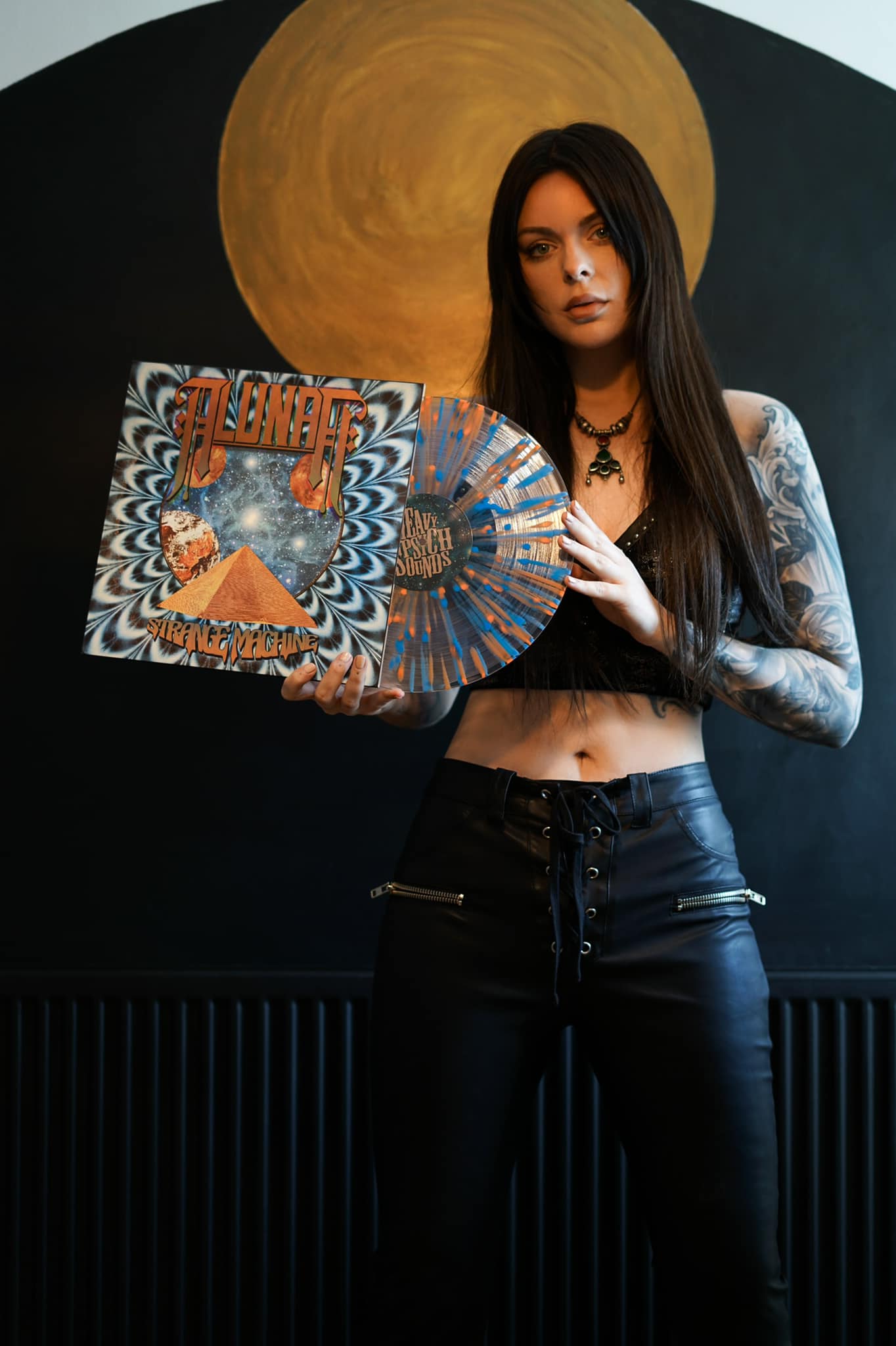 LISTENING TO THE FIRST TRACK ON ALUNAH’S NEW ALBUM “STRANGE MACHINE”, WHICH HAPPENS TO BE THE TITLE TRACK, I THOUGHT I WAS LISTENING TO LUCIFER AND JOHANNA SADONIS. SAME SOUND, SAME VOCALS. ACTUALLY, THE WHOLE NEW ALBUM HAS THAT ‘LUCIFER VIBE’. DO YOU KNOW THEM?

Lucifer are easily now legends in the stoner/doom/ hard rock scene and for good reason. They’re a fantastic band with a fantastic sound. I would say we have similarities because we’re both bands with a retro sound and female vocals. I try and push myself in ways to stand out from sounding too much like one other band though, from using different singing techniques like whistle notes and vocal fry to try and bring something different to the table. There are so many wonderful hard rock bands with female vocalists right now, but I do honestly feel like ALUNAH have our own sound that even when we do experiment with things it’s still there at the core and you know it’s us.

ON “VIOLET HOUR” (2019) DEAN ASHTON DID ALL THE GUITAR PARTS. ON “STRANGE MACHINE” YOU AND MATT NOBLE, WHO JOINED ALUNAH IN 2020, BOTH PLAY GUITAR. HOW IS THE BALANCE BETWEEN YOU AND MATT? WHO’S DOING WHAT?

Writing with Dean for “Violet Hour” was easy because he’s my partner and when you live with someone you can spend as much time as you like writing and come up with things in abundance. Matt joining happened during the pandemic, so we didn’t have ample opportunity as a group to jam things and play around with songs so much. I actually wrote a lot of guitar parts on “Violet Hour” and I wanted to do what I could with bringing ideas in for “Strange Machine” too, so a lot of the initial songs were done by sending ideas back and forth online. Matt layed down some demo tracks out for me to sing over and we built a good amount of songs up that way, then when we were able to meet up and rehearse, Dan (bass) was able to jam different riffs with Matt and build some songs that way.

As a band you have to experiment, sometimes it can be awkward territory,
but most of the time it’s needed to keep things fresh and exciting.

YOU HAVE DEDUCTED THREE SINGLES FROM “STRANGE MACHINE” BEFORE THE ALBUM RELEASE. ON “THE EARTH SPINS” SHANE WESLEY FROM SLUDGE METAL BAND CROWBAR IS PLAYING BASS INSTEAD OF DAN BURCHMORE. WHY?

Shane actually doesn’t play bass on that track, he’s on guitar as well as Matt. He adds a great jazzy & blues soul to the track and it was lovely to be able to have more harmonies with the guitars on a song than we usually would have.

THE LAST SINGLE WAS “PSYCHEDELIC EXPRESSWAY”, MORE OR LESS AN OUTSIDER WITH A TYPICAL 60S PSYCHEDELIA SOUND AND LYRIC VIDEO. YOU ALSO PLAY FLUTE ON THIS ONE. DO YOU PLAY ANY OTHER INSTRUMENTS BESIDES GUITAR AND FLUTE?

I’m a jack of all trades and a master of none. My house is filled with random instruments that I can play a little bit off. I must have a short attention span because I’ll not give myself chance to become really great at only one instrument. I do think that the flute will feature again in future ALUNAH though. 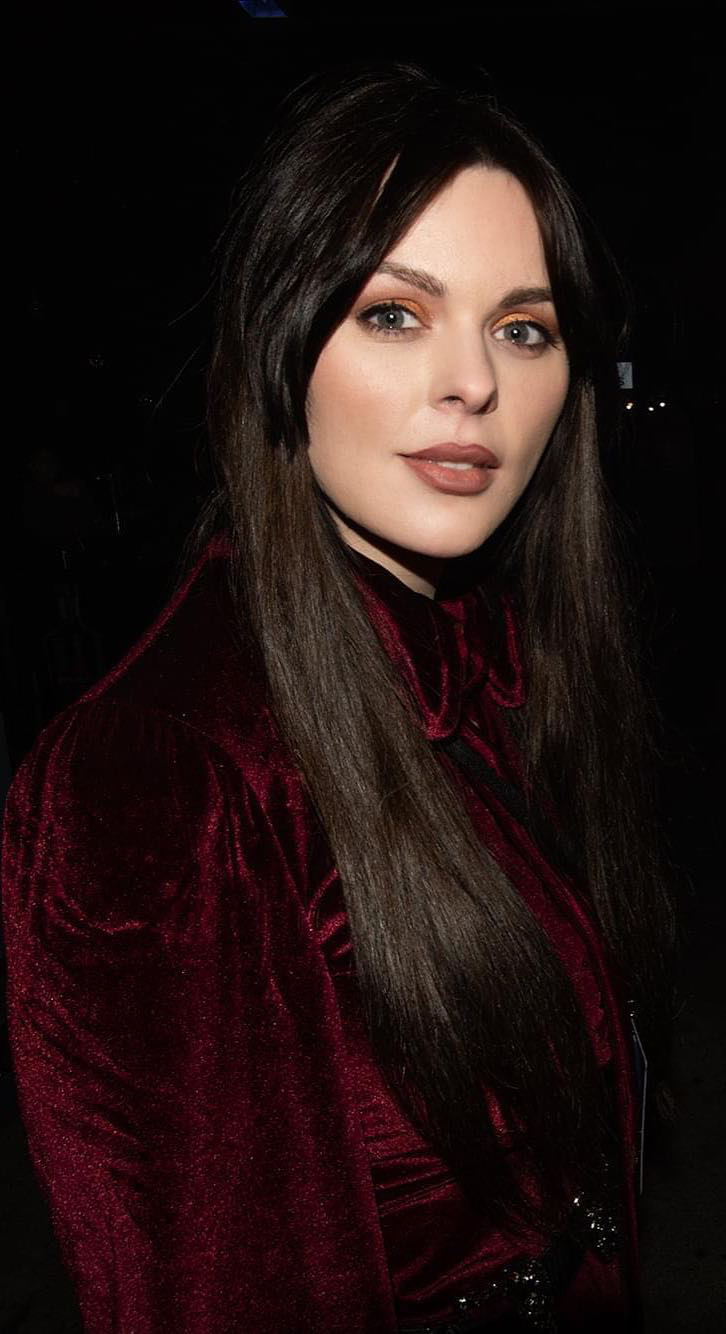 CONTRARY TO “PSYCHEDELIC EXPRESSWAY”, THE NEXT TRACK “SILVER” IS A HEAVY ROCK UPTEMPO SONG WITH STRONG GUITAR RIFFS AND A NICE SOLO. WHAT IS THIS ONE ABOUT AND DO YOU LIKE TO EXPERIMENT WITH DIFFERENT STYLES?

Matt brought this one in, I kept saying to him “LETS DO A FAST ONE”. It’s fast…ish for a doom band I’d say, it’s also a rad song to play live because it gets the blood pumping and the crowd going. We had it as our opener for when we supported Paradise Lost on tour a couple of months ago and it always went down well. As a band you have to experiment, sometimes it can be awkward territory, but most of the time it’s needed to keep things fresh and exciting.

“STRANGE MACHINE” RELEASES APRIL 15TH. ARE YOU ALL EXCITED ALREADY?

It’s wonderful to see how excited the fans are and the growth we’ve had as a band from only the first 3 singles being out. I can’t wait to get back out there and perform them live for everyone.

DO YOU PLAN TO GO ON TOUR THROUGH EUROPE AS WELL TO SUPPORT THE ALBUM OR IS IT DIFFICULT TO GET OFF THE BRITISH ISLAND WITH BREXIT, COVID AND THE WAR IN UKRAINE IN MIND?

Our plan is that 2023 we will head into Europe IF we can make it happen. With Brexit and Covid and now what is happening to Ukraine I feel apprehensive about wether or not that can happen, but I am hopeful. It’s been 4 years since we’ve been into Europe and it’s definitely long overdue.