How do you distinguish yourself in a crowded musical field? By working with the system as it exists now – a calculated approach, granted, but a necessary one. The Pennsylvania hard rock band ETERNAL FREQUENCY is a product of these interesting musical times, giving fans dribs and drabs and tidbits and tastes to provoke their interest, in the form of powerful individual songs accompanied by equally striking videos.

“We live in a day and age where unfortunately people have short attention spans”, singer Emelle Elizabeth says in an interview at the Harrisburg Midtown Arts Center in Harrisburg, PA. “Streaming is the number-one source of music now – people don’t really go out and buy the whole album anymore and if they do, they pick and choose the songs they want to listen to and that’s perfectly fine. We’re kind of trying to beat that in a sense. So instead of putting out a whole album, it’s more specific to each song. And so we have the song and the video and it’s going to tell a story – we keep the longevity going a little bit longer than way”.

“We like videos primarily because we’ve morphed into just being a song-by-song band”, guitarist Justin Walters chimes in. He’s Emelle’s partner in life as well as music. “We are trying to tell a story visually as well”. Emelle complements: “We’re going to keep that going for as long as we can”.

And it’s working. The stylized “Matrix”-esque video for the band’s latest release is the eye- and ear-catching “Step Up”, which has garnered over 236,000 views on YouTube in the month or so since its release. The other guys of ETERNAL FREQUENCY are guitarist A.J. Lopez, bassist Tyler Travis and drummer Dane Lowell.

“Shot on the streets of Brooklyn and Queens, the harrowing “Blade Runner” meets “The Fifth Element” story is about how technology is becoming its own thing”, Justin says – he’s the screenwriter behind their videos. “We exaggerate a little bit on that to where we’re being hunted down by artificial versions of ourselves. It kind of stems from an idea after watching this documentary called “The Social Dilemma” – it’s basically talking about how Google and Facebook are collecting all this data and we all see it on our phones.” 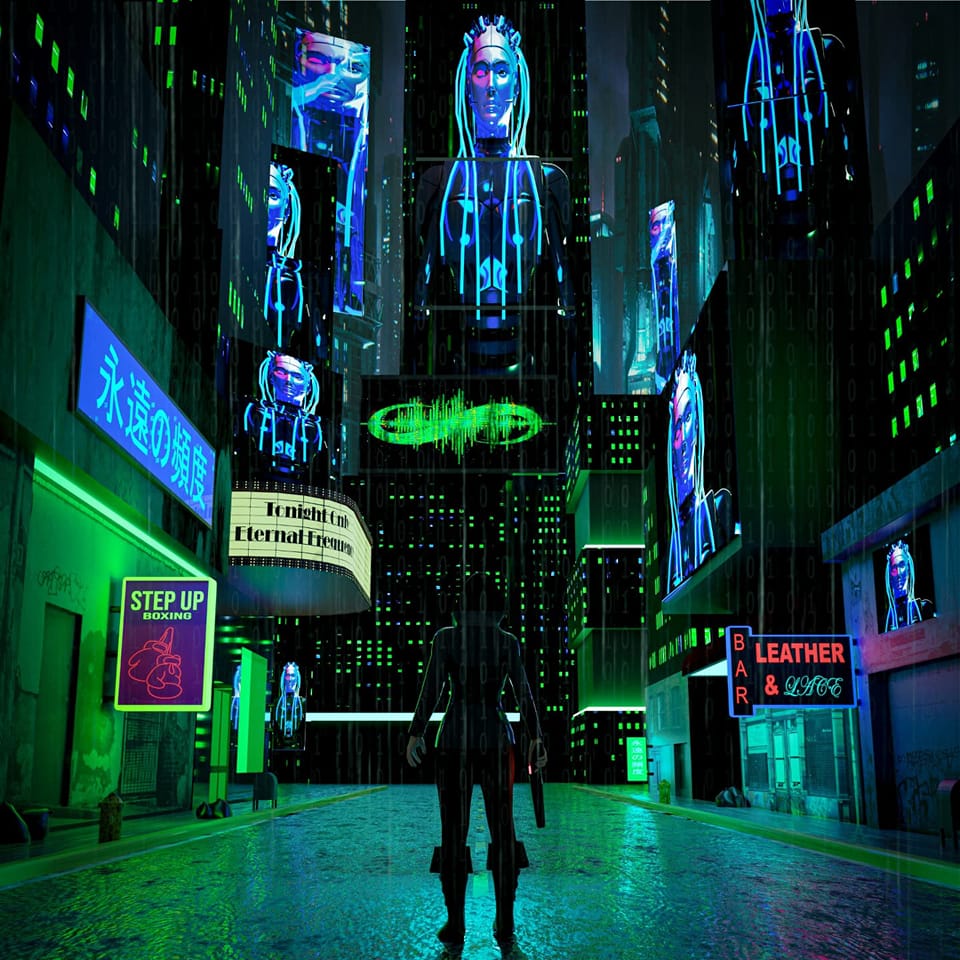 It’s not just the video that’s great – “Step Up” is a most professional, energetic bit of modern metal, catchy and demanding of multiple listenings. One notable moment comes when Emelle snarls: “I’m more than just a bitch / Dressed in leather and lace”.

“When I was writing this song, even before we developed this whole story, I more so wrote it about women in music being oversexualized and pigeonholed and not really having any substance to them”, she says. “I don’t ever want to fit that mold – I want to break out of that and I want to show that women can sing rock music and be respected and they don’t have to be showing their goodies all around all the time. It’s about the music and giving young girls and all women a voice and escapism”.

“Step Up” is actually part of a trilogy – “Part two is going to be a continuation right where we left off – with the holographic Emelle and the alternate version of her coming face to face – this one’s going to be more so Emelle‘s journey to whoever she’s coming for”, Justin reveals. They’ll be filming the next video – for the song “A.I.” – in mid-March for release around the end of April.

Pay attention to Emelle’s hair color as we go along – it’s red at the beginning of “Step Up” (when her alter ego is being zipped into a body bag), blonde by the end – it’s green now. “I really wanted to dye my hair green, so we’re just like, how can we make this more involved in part two – dyeing the hair and changing the look so they stop chasing us”, she explains. “We use her hair as an Easter egg”, Justin jokes. “She’s zipping up the version of herself with red hair… and that was a continuation of the earlier song “What Are You Waiting For” – we’re using her hair as a breadcrumb trail in the plot.” 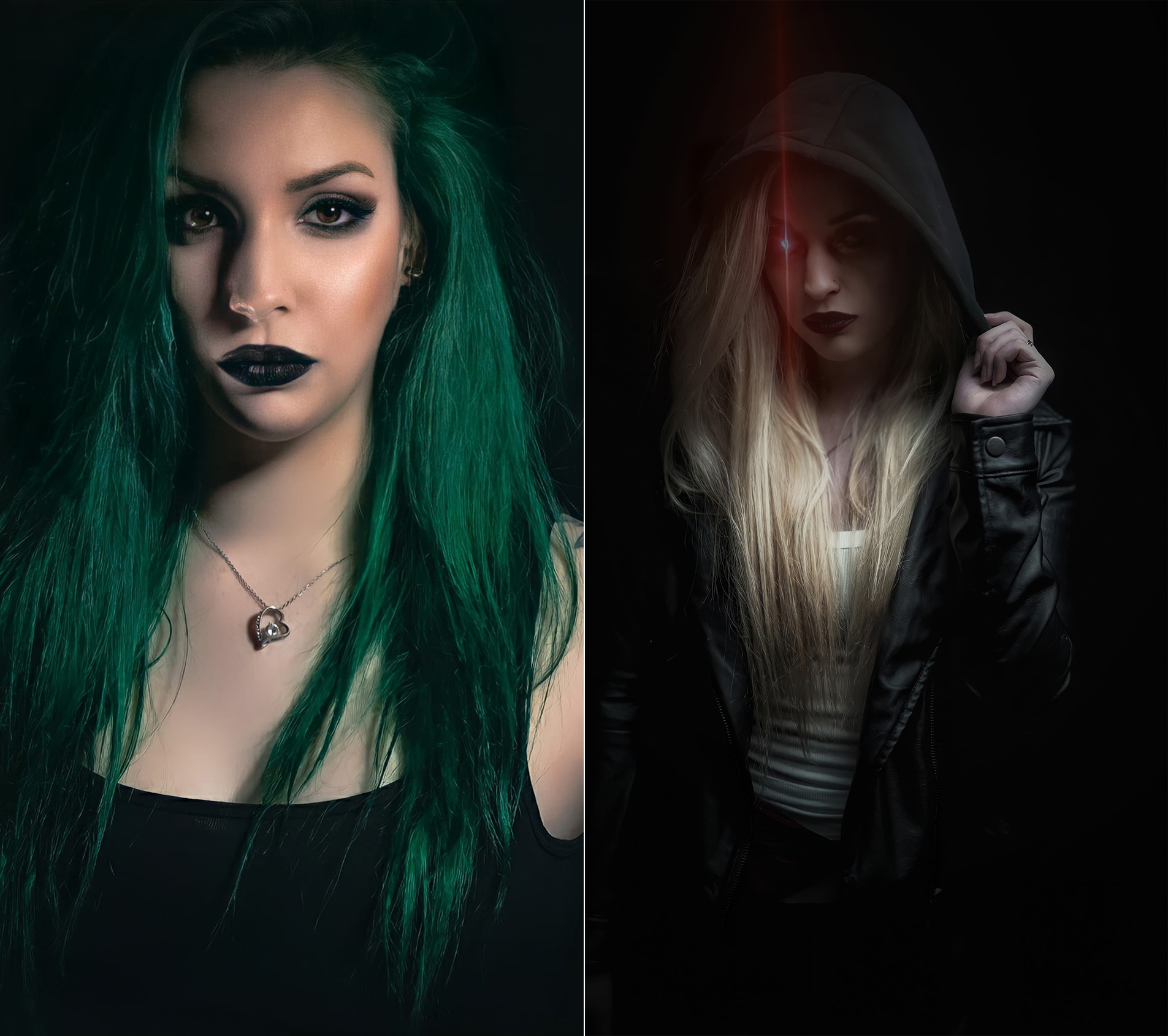 Emelle is from the Philadelphia area, the rest of the guys hail from various parts of central and eastern Pennsylvania. They’ve been together since 2018. Emelle speaks of their beginnings: “I made a post on Facebook and said I was looking to be the singer of a band, and a former member hit me up and we started the band”, she enlightens. “A.J. came into the band, then Justin and then Tyler came along, all through pretty much Facebook”.

“I wasn’t from the area, but I saw one of their music videos and I was like wow, that song’s awesome, I want to be a part of it”, Justin chimes in. “I had just left a band, I wasn’t really looking for a gig. I saw one of her posts because I didn’t even realize we were friends – she came up in my feed and I was like holy hell, yeah, and so I just messaged her at like 2 in the morning and said, ‘I’m a guitar player, you need one?’”, he elaborates – they had been looking for a fill-in guitarist at the time.

Emelle started singing, well, early on. “If you asked my mom, she would say that it was straight out of the womb”, she says. “I started doing talent shows, singing for anybody that would hear me, basically since the age of 5. And then I got into theater – I did acting classes, singing classes, dancing classes. I did musical theater for a good 17, 18 years of my life. And then I did an ‘80s cover band for a little bit. And then I was like, I want to be the lead singer of a rock band – I grew up with ‘80s hair metal and classic rock and it really inspired me to be the person I am today”, Emelle reminisces.

She cites Evanescence and Halestorm as her main inspiration in the female-fronted arena (the latter band also hails from central Pennsylvania). “It’s still a dream of ours to play with them and tour with them, and I don’t think it’s too far off”, Emelle asserts. “Our genres are a little different, but I think vocally and just all around, I think we would blend really well with them – hopefully we’ll get that chance”.

Speaking of shows, ETERNAL FREQUENCY played a few days later at Harrisburg’s XL Live. The well-attended set included “Step Up” and others including “What Are We Waiting For”, “Temptations” and the uber-catchy “Parasite”, as well as the unreleased pandemic-inspired “Breathe In, Breathe Out” and their excellent take on Nine Inch Nails’ “Head Like A Hole” (which happens to be Justin’s favorite band). “It’s always been a guilty pleasure of ours thinking could we do this?Could we do it justice?”, Emelle says. “I think we did”. They closed with Queen’s “The Show Must Go On”, which they gave both respect and plenty of muscle. The video of their version was done during the pandemic as a fundraiser for the National Independent Venue Association.

By the way, if you’re still old-school, don’t fret – there will be an ETERNAL FREQUENCY album at some point. “We’re always working on music all the time – we have so much stuff in our arsenal that if we wanted to, we could put an album together tomorrow”, Emelle explains. “But we’re being very strategic about it with the singles and the videos and telling a story. We all want to do an album and when it feels right, that’s when it’s going to happen”. “As the concepts keep building, the likelihood of full-length albums or EPs is looking a bit more positive”, Justin contributes. “We honestly have about 20 or 30 new songs that we could release any day if we wanted to”.

“But it’s all strategic”, Emelle states. “I feel like what we’re doing now is going to get us more attention – we’re still a small band, we’re still growing and trying to get a name for ourselves. This is what’s going to get us the most attention. And then, fingers crossed, we get signed down the road and it can help us produce that full album and everyone will listen to it from start to finish. That’s what we’re trying for”, she wraps up.