Marta Gabriel, vocalist and guitarist of Polish heavy metal/power metal band CRYSTAL VIPER, is not the person who sits tight during the pandemic. On the contrary! She released “The Cult” with CRYSTAL VIPER in January 2021, followed by her solo album “Metal Queens” (a celebration and tribute to female singers and female fronted heavy metal acts of the ’80s) in July 2021 and on March 25th of this year, the next CRYSTAL VIPER album is already in the pipeline. Mmmm… maybe not quite a full-length album, but more about that later. We had an email chat with Marta about “The Last Axeman”. 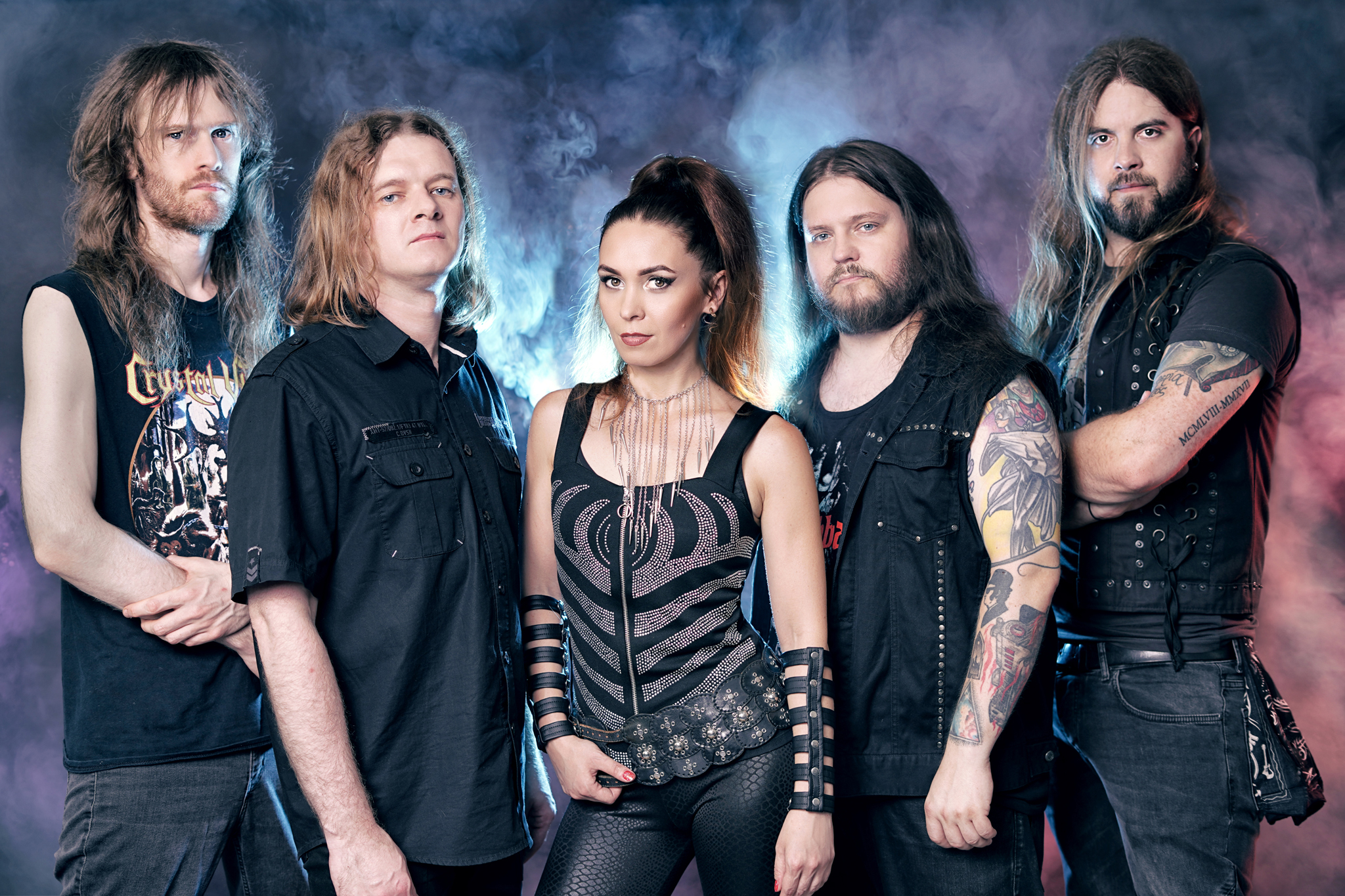 To start this interview, there seems to be an issue about what to call “The Last Axeman. Is it an EP, a Mini-LP (MLP) or a full-length album? It could be either, but what do you call it?

Well I believe it’s fair to call it a Mini-LP, or maybe a compilation. It’s indeed almost 40 minutes long, but it includes a remake of an old song, 1 new song, 2 cover songs and 4 songs recorded live in studio – so for sure it’s not a new full length album. 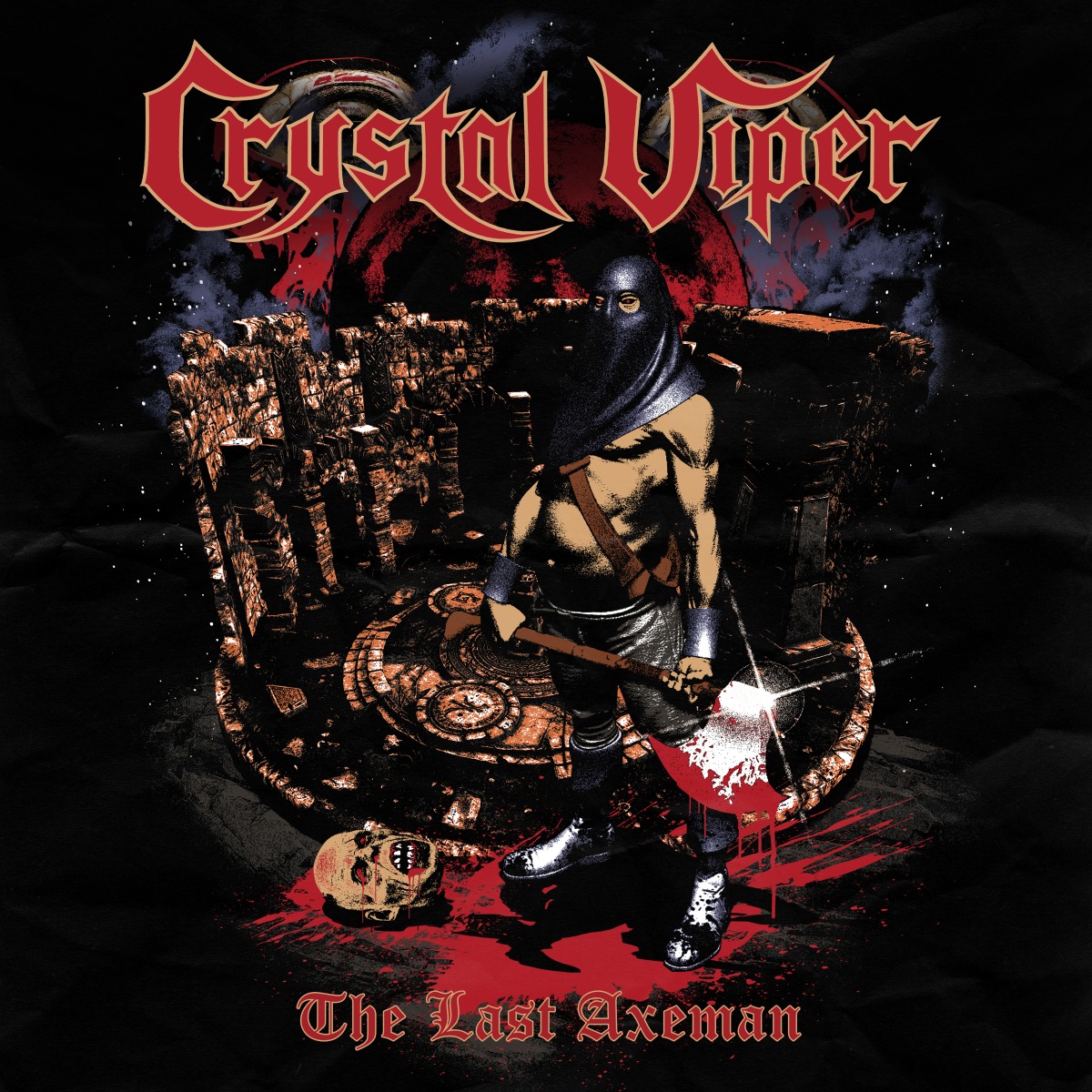 About the title, “The Last Axeman”, back then an homage to Omen’s J.D. Kimball who died of cancer in 2003. But metaphorically, an axeman is also a guitar hero. In that perspective, and as a guitarist yourself, who would you call The Last Axeman in 2022?

Our axeman had many different incarnations. Like you said, the original song was dedicated to the Omen singer J.D. Kimball and obviously the word „axeman” was inspired by Omen. In the meantime he became an executioner on the cover of our new MLP, he was a 16-bit game character in the video which we released last year, and yeah, that’s a good term for a guitarist as well. Everyone can interpretate it their own way, but in general an axeman is surely a Heavy Metal character.

The album opens with the title track, a re-recorded version of the one on CRYSTAL VIPER’s debut album “The Curse Of Crystal Viper” (2007). Why did you especially want to redo this one with such an extensive collection of CRYSTAL VIPER songs?

We wanted to celebrate the 15th anniversary of our debut album by re-recording one of our old songs, “The Last Axeman”, and releasing it as a single. As you know the idea with the single didn’t work out, as the release was becoming bigger and bigger, like a snowball, and we now have this EP with 8 songs on it. An interesting thing about “The Last Axeman” is that this is the very first song that I composed for CRYSTAL VIPER, so I thought it’s a perfect song to celebrate the 15th anniversary. It also seems it’s one of the favorite songs of our fans, so we thought it deserved to be recorded again, with updated production and arrangement.

The only new track on “The Last Axeman” is “In The Haunted Chapel”. You didn’t want to save this one for the next album?

Yes, that’s a brand new song that I composed especially for this release. But it would actually fit to „The Cult“ album perfectly, because lyrically it’s inspired by an H.P. Lovecraft story, „The Haunter Of The Dark“. Also, the style of the song has a very similar atmosphere to those you can hear on our latest album. I didn’t think about keeping it for the next album, in fact we, didn’t yet think about a next album at all. Too early for that, and in our minds „The Cult” still is our new album. 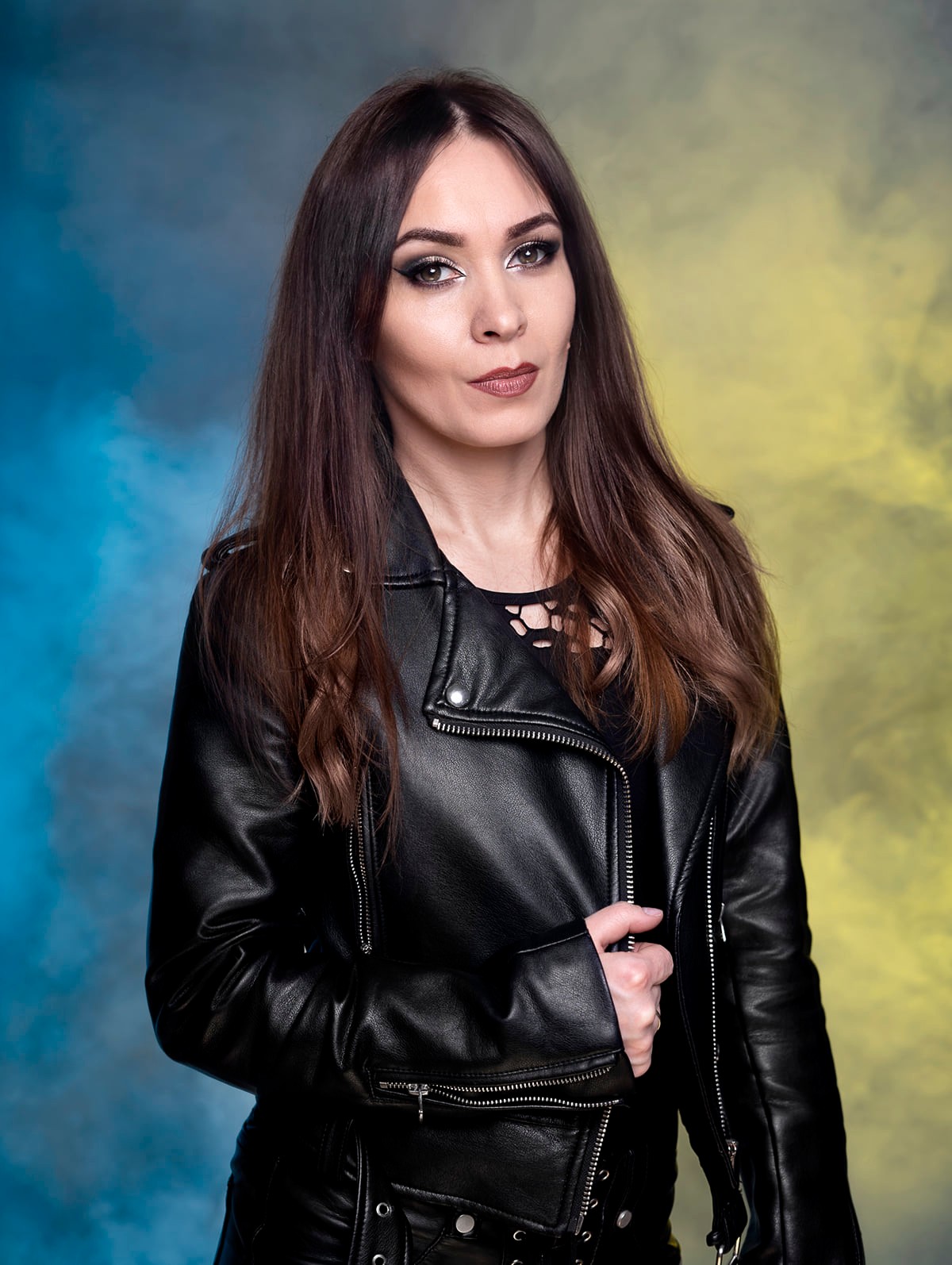 The first of two covers on “The Last Axeman” is “Ulitsa Roz” from Russian heavy metal band Aria and you sing it in Russian too. Under the current circumstances with the war between Russia and the Ukraine, and given you had the chance to change it, would you still have done a cover by a Russian band?

We recorded that song like 11 months ago and the vinyl and CD went to pressing like 3 months ago – back then no one could guess what would happen. Yes, I believe that we would choose another cover song at this point, but it doesn’t make the entire situation less sad, as now Russian, Belarusian and Ukrainian bands will be even more separated from the metal world… You know, obviously not everyone in Russia is bad, a lot of people from there openly protest against this brutal attack on Ukraine and they are being thrown to jail, they lose their jobs and so on. We of course can’t compare it with innocent people being killed or losing their homes, but the thing is, there is no winner here, it all doesn’t make sense and it’s heartbreaking. Both sides are suffering and will suffer for many, many years. I know we have lot of fans in Russia and the Ukraine (our albums were officially released there) and now not only us, but many other bands from Europe or the United States won’t be able to play for them, it’s like a new Iron Curtain. When we were choosing cover songs to record, we never really thought about where is the particular band coming from. Aria is a great band which recorded some great albums and that’s why we decided to celebrate their music. For the same reason in the past we recorded covers of acts such as Manilla Road, Exciter, King Diamond, Grim Reaper or Dokken – they had an influence on us and we weren’t thinking where they are coming from.

The second cover is by one of the most underrated NWOBHM bands ever, Diamond Head. They should have been much bigger with a status that bands like Saxon and Iron Maiden have nowadays, but they just didn’t have the luck. Why did you chose “It’s Electric” from their superb album “Lightning To The Nations”?

Diamond Head is one of my absolutely favorite bands, it actually was one of the very first metal bands I started to listen. I used to warm up to their songs before live shows and I had this plan of recording one of their songs for a long, long time. We were thinking about recording either „Call Me” or „It’s Electric” – we started with trying out „It’s Electric” and we agreed it sounds so good, that we don’t need to choose anything else.

You showed your love for 80s metal songs in the numerous covers that CRYSTAL VIPER have already done and also on your solo album “Metal Queens”. At this point, what are the top 3 metal tracks from the 80s that you personally still would love to cover, with CRYSTAL VIPER or as a solo artist?

Oh wow, just three? There are are tens if not hundreds of cover songs I would love to record! We love recording cover songs and we recorded many, many of them. So it’s basically like a tradition in our case. We keep on recording cover songs of our favorite artists, to show our fans where it’s all coming from, what are the roots of CRYSTAL VIPER, but it’s also a tribute to bands who inspired us and had influence on what we do as a band.

Side B of the vinyl contains four tracks taken from CRYSTAL VIPERS last album “The Cult”, stripped down rough versions recorded live in the studio as part of the #RockOutSessions. Why did you do this and can we expect more sessions like this?

I actually am co-founder of the whole #RockOutSessions series – we started it with my friend Rafal Kossakowski (studio owner), to support bands who, like us, had to cancel shows due to the pandemic. We recorded 6 bands that way, and at some point when we had all CRYSTAL VIPER members in one place, we decided to do that as well. The final result was so good that we decided to release the material physically, that’s why except being uploaded as a 20 minutes long video on YouTube, it has been added to this new MLP. 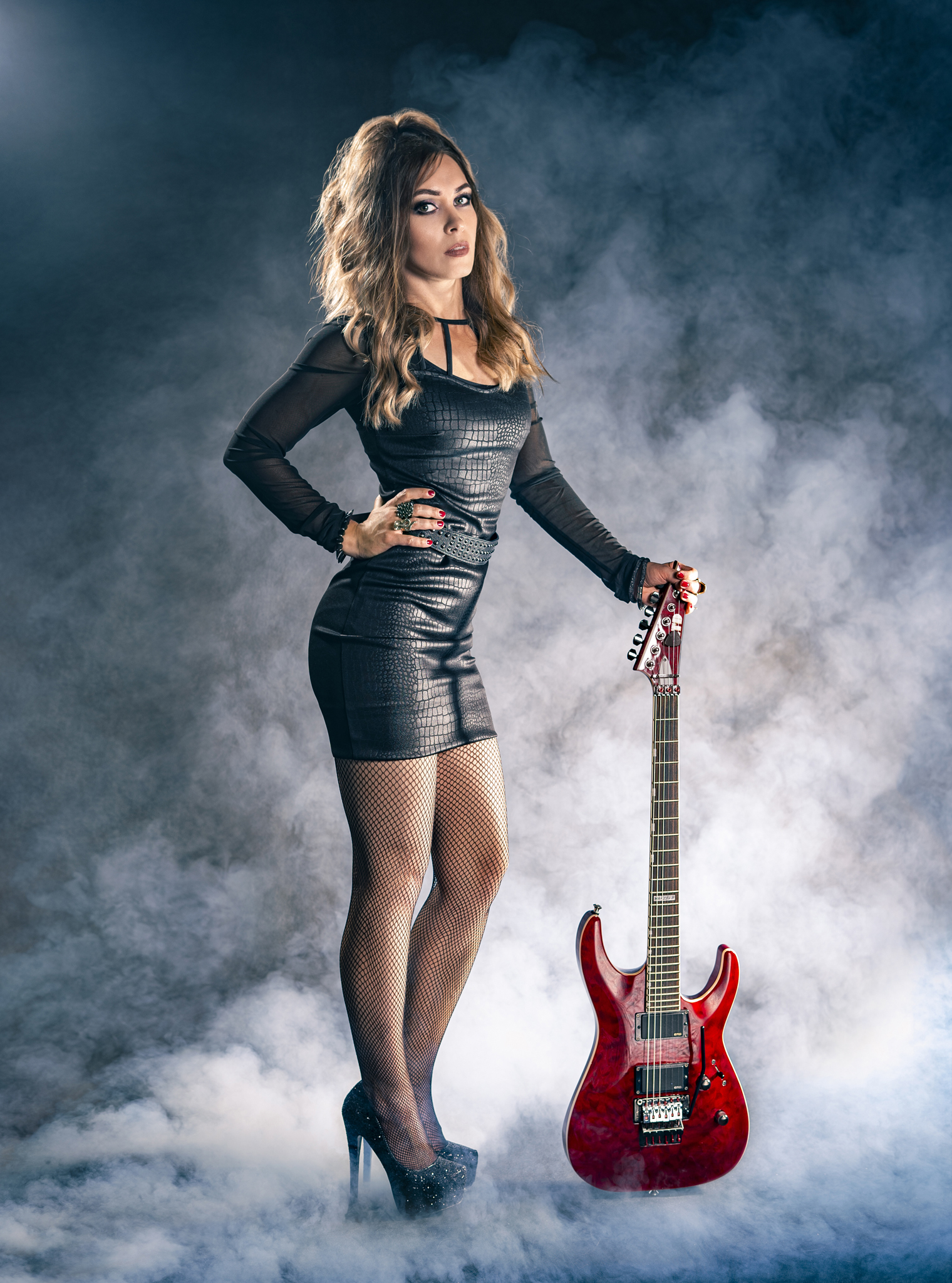 Now that Europe is opening up more and more for concerts again, are you going on tour with CRYSTAL VIPER soon to finally support “The Cult”, “Metal Queens”  and “The Last Axeman”? What would your setlist look like with choices from these three albums?

The situation is probably even more complicated than before, as many shows and festivals that were canceled or postponed during the last 2 years are now supposed to happen. Plus of course, there are hundreds of bands who released new material in the meantime and who also want to play shows to promote those new releases. So all festivals, clubs and venues are over-booked. I know we will play some shows during the Spring and Summer, but how many of them will really happen – I simply don’t know. I would of course love to play as many shows as possible. When we work on a setlist we always try to choose most popular songs from all of our albums, we simply listen to our fans. But that’s not so easy of course, CRYSTAL VIPER did 8 studio albums, and everyone has their own personal favorites.

The festival season is also forthcoming. Any particular one where you would like to see CRYSTAL VIPER’s name on the poster?

Any of them, or better – all of them (laughs). No seriously, we are hungry to play, the energy is boiling in us. Within the last 2 years we managed to play literally 3 shows only, as everything else was cancelled or postponed. Although even some of the 2022 festivals for which we were booked have again been postponed or canceled, so I don’t really know how it will end. CRYSTAL VIPER is a live band, we love playing live, we love sharing our music with the people.