RED IS THE NEW BLACK

AETERNITAS sixth full-length album “Haunted Minds”, that was released less than eight months ago on WormHoleDeath, still featured Julia Marou on vocals. But since she stepped down in March 2021, the band had to find a replacement for her and they found one in Liz Miss ScarRed. This raises some questions, of course, and therefore we took the bold step and contacted the beautiful redhead for an interview. Lucky for us, she agreed and hence the following Q&A. 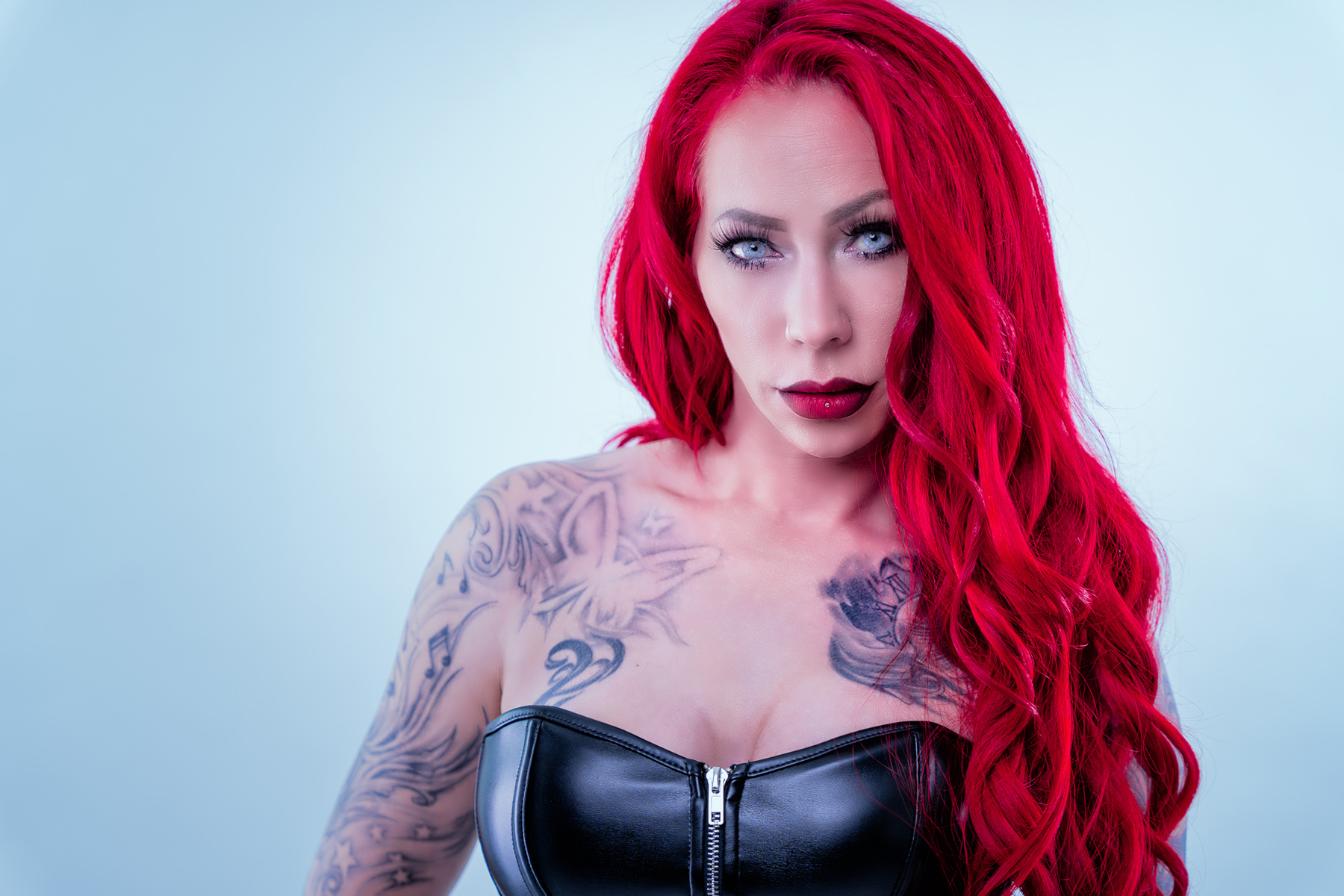 Welcome Liz Miss ScarRed. For starters, by what name would you like to be addressed to, Miss ScarRed or Liz?

I would be very happy if you call me Liz. Miss ScarRed is the pure artist name and addressing me personally like that would be a bit aloof .* laughs *

Please tell us something about yourself. Where do you come from? What’s your musical background?

I come from near Cuxhaven in Germany. I was born in Lüneburg. As a little kid, I listened to Michael Jackson all day, from morning to night. But country rock is also one of my influences as a child. Then Guano Apes came to my ears and I was so excited, followed by Eminem, Limp Bizkit & Linkin Park. When Arch Enemy, In This Moment and The Pretty Reckless came on stage, it was done. My style came about through so many influences, but every music also brings its own emotion for me and a person doesn’t have just one emotion. Every music is worth listening and I don’t just refer to one. But my heart is definitely at home in rock and metal.

I was sure I wasn’t the woman they were looking for and then my phone rang. They were so excited about my version and I was so shocked by this news that my beer almost fell on the floor.

So, now you are officially the new lead vocalist for AETERNITAS. Had you heard of them before and how did the two of you get in contact?

Oh, that’s a long story. I try to be short… I heard a playlist on Youtube, followed by “The Birthmark” by AETERNITAS. I was listening to several songs and I thought: “what happens to symphonic metal when I sing these songs?” It was just a feeling. I laughed at myself and forgot the thought. ROCK VOICE MEETS SYMPHONIC METAL – it was a crazy thought that someone would listen to it. In symphonic metal usually sing fairy voices and I am very far from that with my voice. After a while I had a new follower. It was Anja from AETERNITAS, just out of nowhere … Some time passed and suddenly I received a request that AETERNITAS was looking for a new front woman. I was very unsure whether I was suitable for it, but then I phoned Alex. He sent me 2 songs to record. I tried to sing it like Julia at first and I went crazy, it wasn’t me. I decided to try one more time, I recorded the two songs with my own style and interpreted them the way I feel the songs and I sent them off. I was sure I wasn’t the woman they were looking for and then my phone rang. They were so excited about my version and I was so shocked by this news that my beer almost fell on the floor. The thought was just too crazy. * laughs * 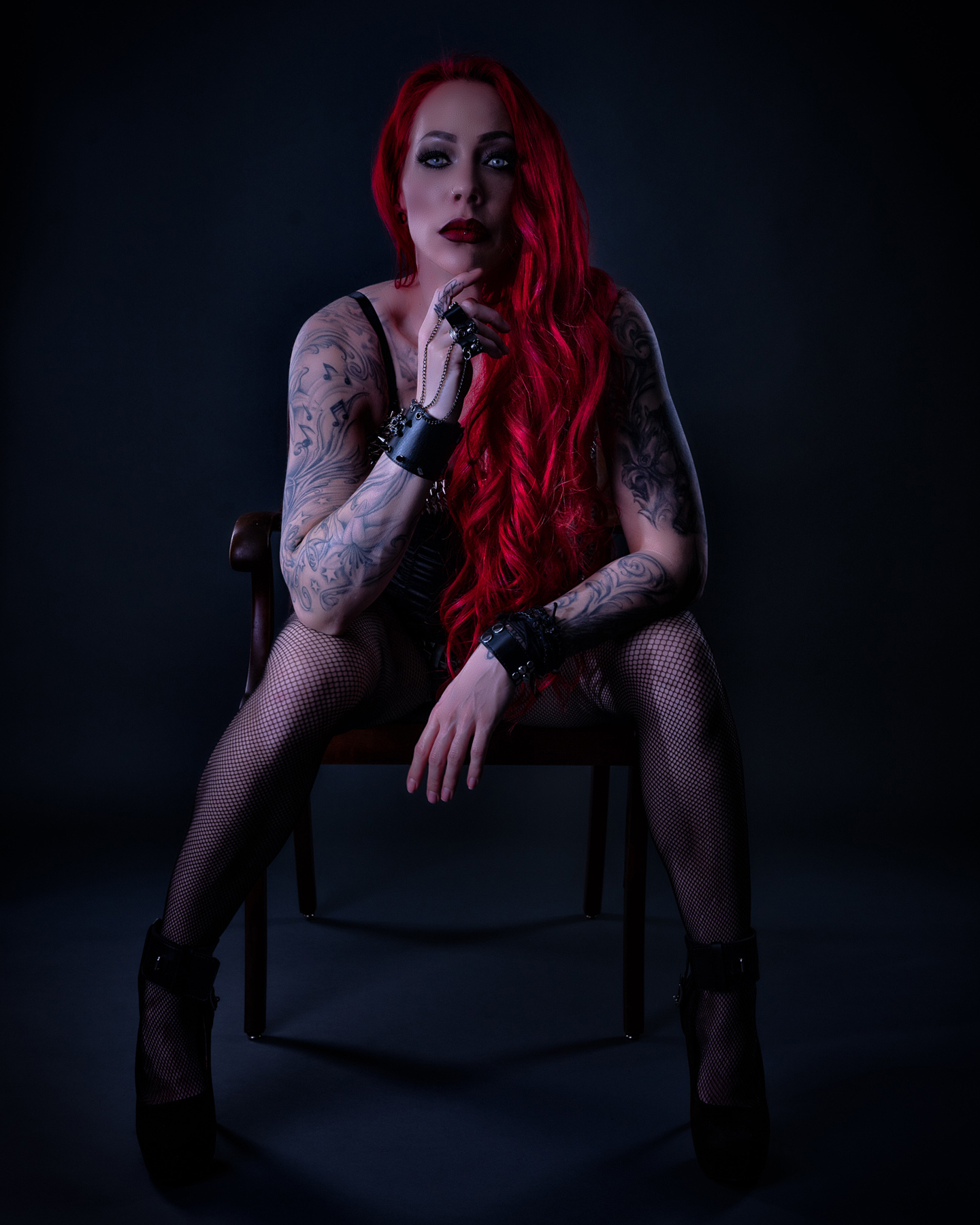 Your first arsenal will be the single “Shadows” that will be out in Autumn 2021. Are you nervous?

The recordings will start shortly. Yes, I’m very excited, it’s our first single together. Every song we share is something special, but the first song we share is very emotional for me. Most of all, I’m excited about how people will react to this new style.

We know that you are replacing Julia Marou, but who else are in AETERNITAS nowadays?

The cast of AETERNITAS has otherwise not changed. Everyone else is still there. Anja Hunzinger on keyboards, Alex Hunzinger as rhythm guitarist and singer, Daniel T. Lentz as lead guitarist, Rick Corbett as bassist and Frank Mölk is the drummer.

Do you think it will be difficult to replace Julia the first time on stage? What would be the best reaction from the fans for you?

I don’t want to replace her. I can only be myself. When I try to be someone else, I lie to myself and everyone else. I’m not a 2nd Julia. The best reaction from the fans for me would be if they would accept my invitation to come into my world and of course if we could go freak out together.

On July 24th, AETERNITAS will do a Facebook Q&A live session to introduce you to the fans. There will also be an acoustic live stream with you and Alex Hunzinger performing some AETERNITAS songs. What can we expect?

We will play the songs very pure, just a guitar and our voices. Everything is reduced to a minimum and very transparent. The songs have a different acoustic performance in another version. And of course, it is important to me that people can see and hear who and how I am. 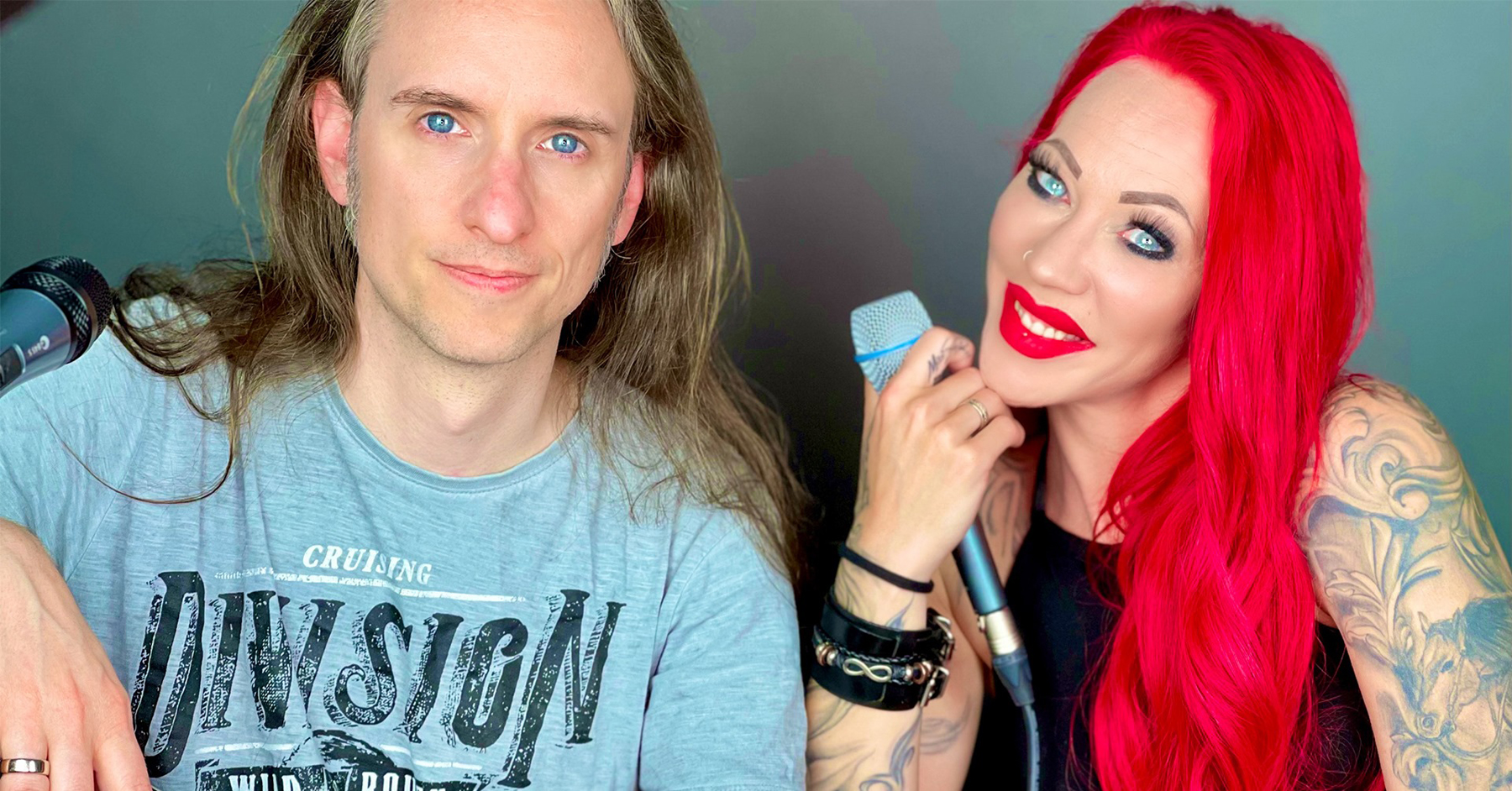 Besides being the singer for AETERNITAS, you also handle the mic with ScarRed and the collaborative online metal project Chaos Rising. And, you are a vocal coach as well. Can you tell us something more about this?

Yes of course. My band ScarRed was formed at the beginning of the pandemic. The first songs were created online. For known reasons and a few other reasons, we haven’t released any songs yet. Now normal work is possible again and we are continuously working on our songs. When a first single of ours will appear, however, remains a secret.

Yes, I am one of the singers in the Chaos Rising Project. It is a worldwide online female project. I’m proud to be there, it’s something special. Everything is done by and through women and we work together in groups. I am not a feminist, or despise men, and the project is also not hostile to men. It’s just amazingly interesting to work with so many women, I didn’t know that before. It is often difficult with women, that is not the case here and new musicians are constantly being added and the project will grow. So, if you still know someone, she is very welcome with us.

My attitude is: nobody has the right to treat someone else from above or to present himself as something better. We are all just humans and everyone poops every day.

And yes, I trained as a vocal coach at the Powervoice Akademy. Although my voice is different, they believed in me and supported me in many ways. The reason that I was allowed to do this training was that I want to help other people to find themselves and have the courage to come out of themselves. There are so many great voices out there that should be heard.

When can we see your beautiful red hair… eh, I mean you and AETERNITAS back on stage? 😊

Haha you said that very charmingly. I am very confident that we and my hair will be on stage together very soon. * laughing * We are in the planning. I’m really looking forward to rocking the stage again at this moment.

I don’t think I can say famous words. My attitude is: nobody has the right to treat someone else from above or to present himself as something better. We are all just humans and everyone poops every day.

These are certainly not famous words, but mine.