On April 30th, Aussie heavy metal band TEMTRIS and Italian label Wormholedeath will release the band’s sixth album “Ritual Warfare“. An album that should finally break down all barriers and make it possible for the band to tour overseas. TEMTRIS are most certainly ready to make this giant step forwards and the new album and label are their tools. We had an interesting chat with TEMTRIS singer Genevieve Rodda, in which we discussed the new album and an upcoming, hopefully, Coronaproof Australian tour. 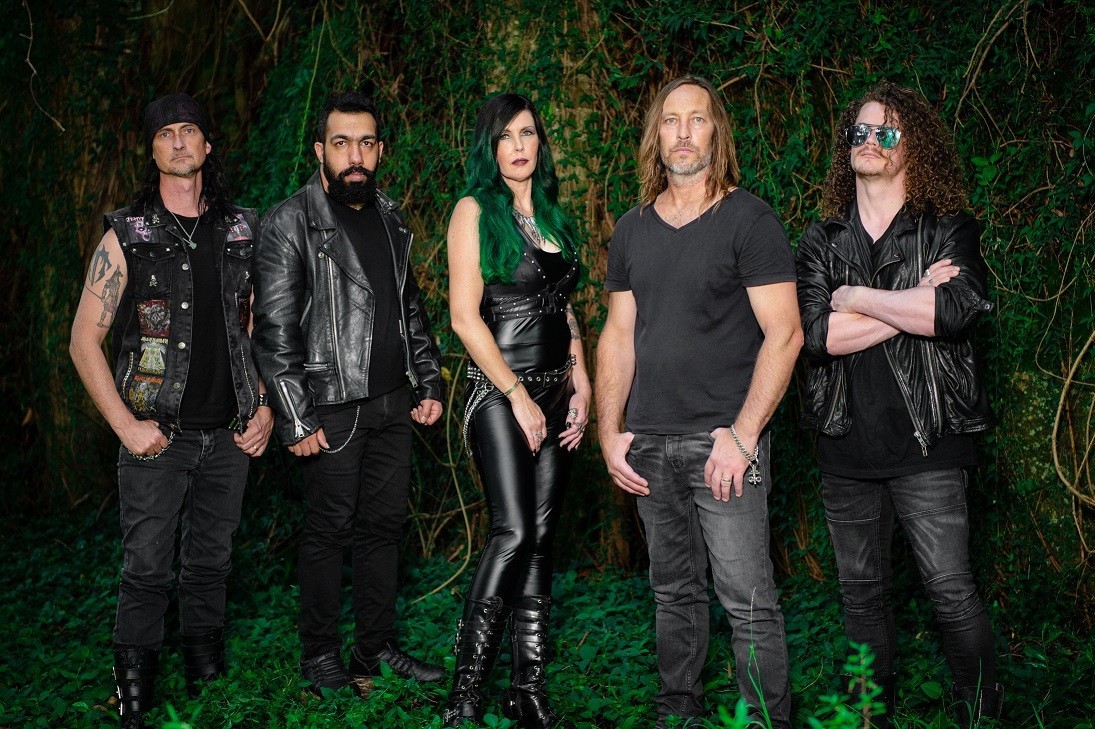 There’s a lot going on with TEMTRIS at the moment: a new single out on April 3rd, a new album “Ritual Warfare” on its way and a small Australian tour in May and June 2021. You could say, Covid-19 has no effect on TEMTRIS?

We are very lucky here in Australia. We had a relatively small lockdown compared to other countries. We made an effort to make the use of that time and record and release our single “Forever” last May and then hit the studio to write and record the album “Ritual Warfare”. TEMTRIS was determined to keep our name in the spotlight and not let Covid stop us. 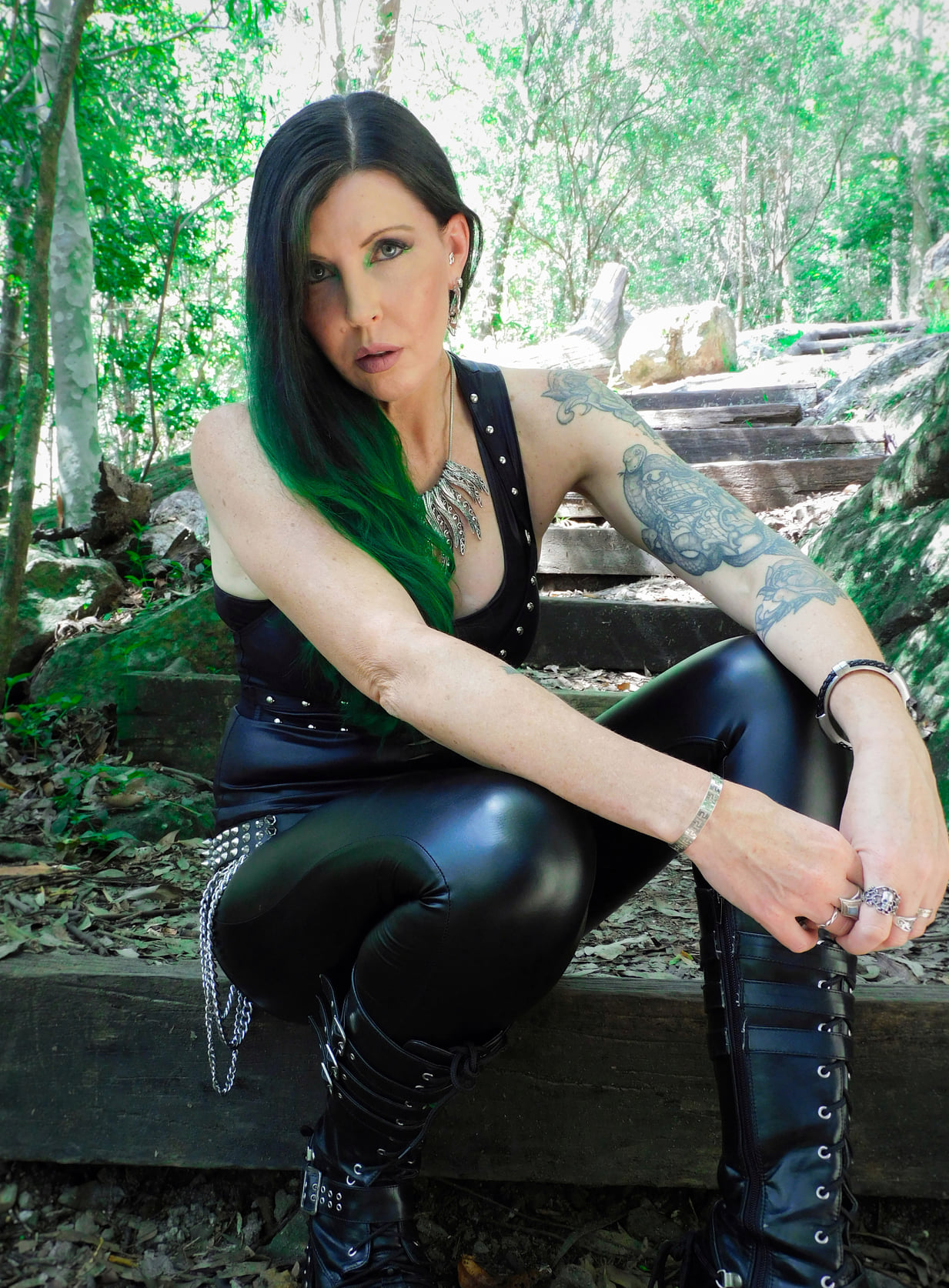 Let’s go back in time a while. In September 2020 you announced that TEMTRIS had signed a deal with Italian label Wormholedeath Records. Your last four albums have all been released by Battlegod Productions. They couldn’t offer you what Wormholedeath did?

Battlegod Productions has done an amazing job looking after TEMTRIS’ previous releases. We had a handshake distribution deal with the owner Peter (Kotevski – president). But when Carlo (Bellotti – manager) from Wormholedeath offered us a new album deal we decided it was time to reach out to a different audience and see if Wormholedeath could help TEMTRIS grow overseas. Both companies are amazing and I would recommend bands to work with them if the chance arises.

Signing to Wormholedeath must also give you the liberty to travel outside Australia and finally break that barrier and come to Europe for festivals and a tour?

That was our plan. Originally we had hoped to tour overseas with this album release. Japan was also on our radar as we get a Japanese pressing of “Ritual Warfare” also. Hopefully international borders can open again soon and TEMTRIS can finally play some festivals overseas. 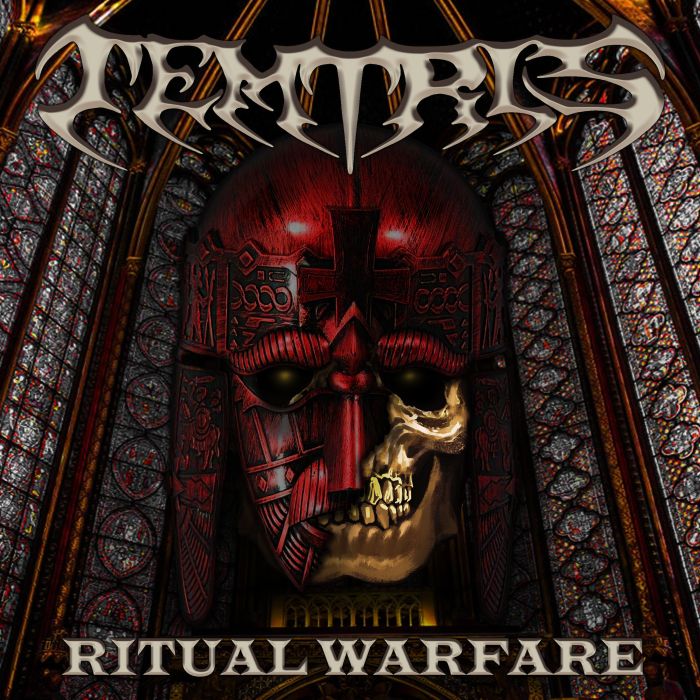 Your new album “Ritual Warfare” will be out on April 30th. What exactly do you mean by the title? Is it a warning considering the lyrics “If genocide is yours to sell / We’ve already gone to hell” in the title-track?

Anthony Fox (guitar) actually wrote the song and lyrics for “Ritual Warfare”. Those lyrics encourage the audience to consider how much power humanity gives to religion and at what point does religion absolve acts of evil.

By the way, who made the iconic cover arts for both the singles “Forever” and the title-track and album “Ritual Warfare”?

On the title-track you start with a long high-pitched scream. Did you know you had that in you? Almost sounds like Geoff Tate or Rob Halford in their old days… 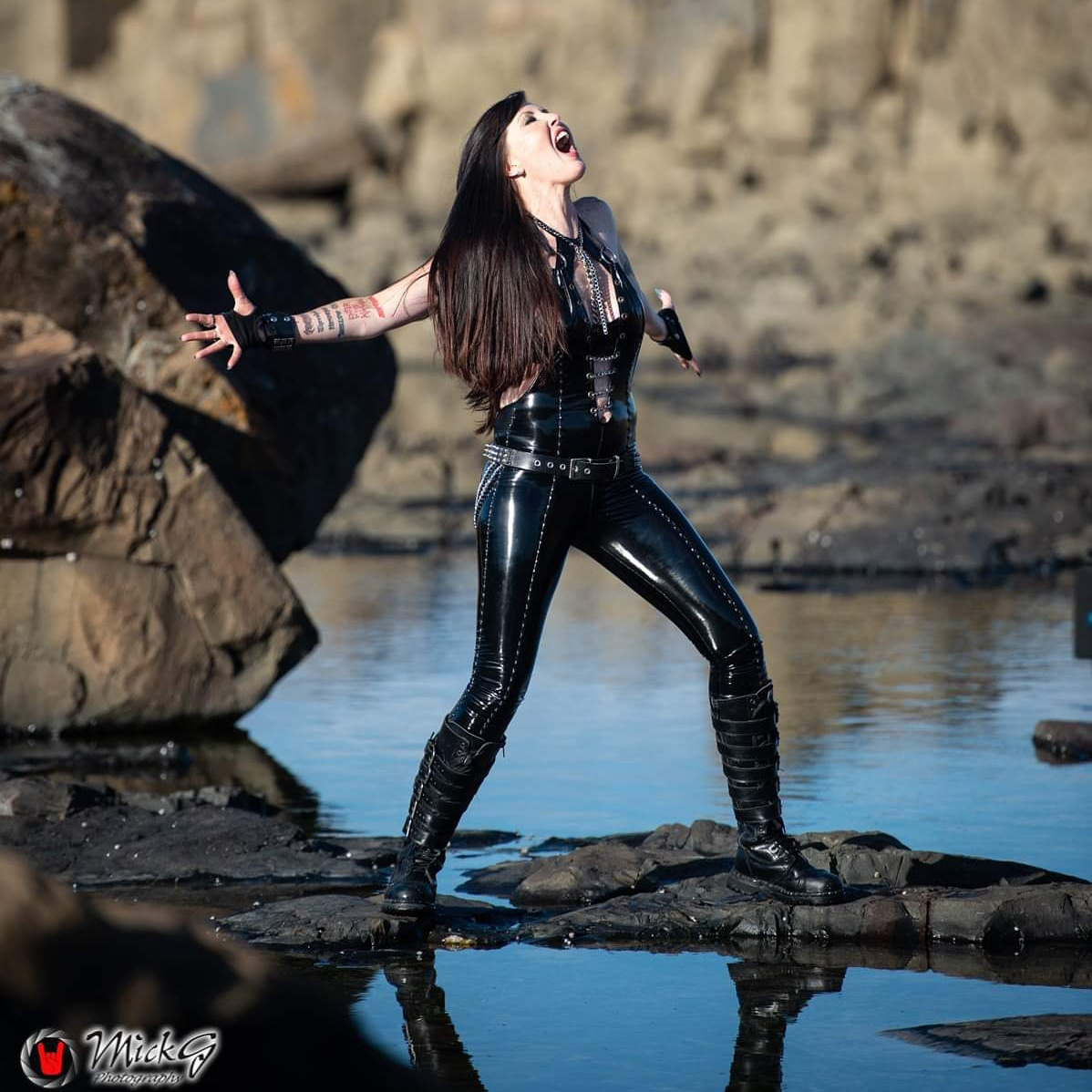 Oh thank you for such a great compliment. I thought the song needed a scream and we decided to record my ideas and it came out better than I had hoped. I am pushing my limits more with each album. We have a studio here at home so it gives us the ability to record ideas and try things. The scream was something we added after we had completed most of the recording. So glad we kept it on the song.

Now that we’ve mentioned your singing voice, there are similarities between yours and that of Chastain’s Leather Leone, one of the pioneers of female fronted rock and metal. Is she someone you have listened to or did she inspire you somehow?

I do know of Leather Leone and have been compared to her by other reviewers. But I actually focused my singing style more on Bruce Dickinson or Geoff Tate. They are 2 of my favorite vocalists. I am also a huge fan of Doro and have followed her since she was in Warlock. 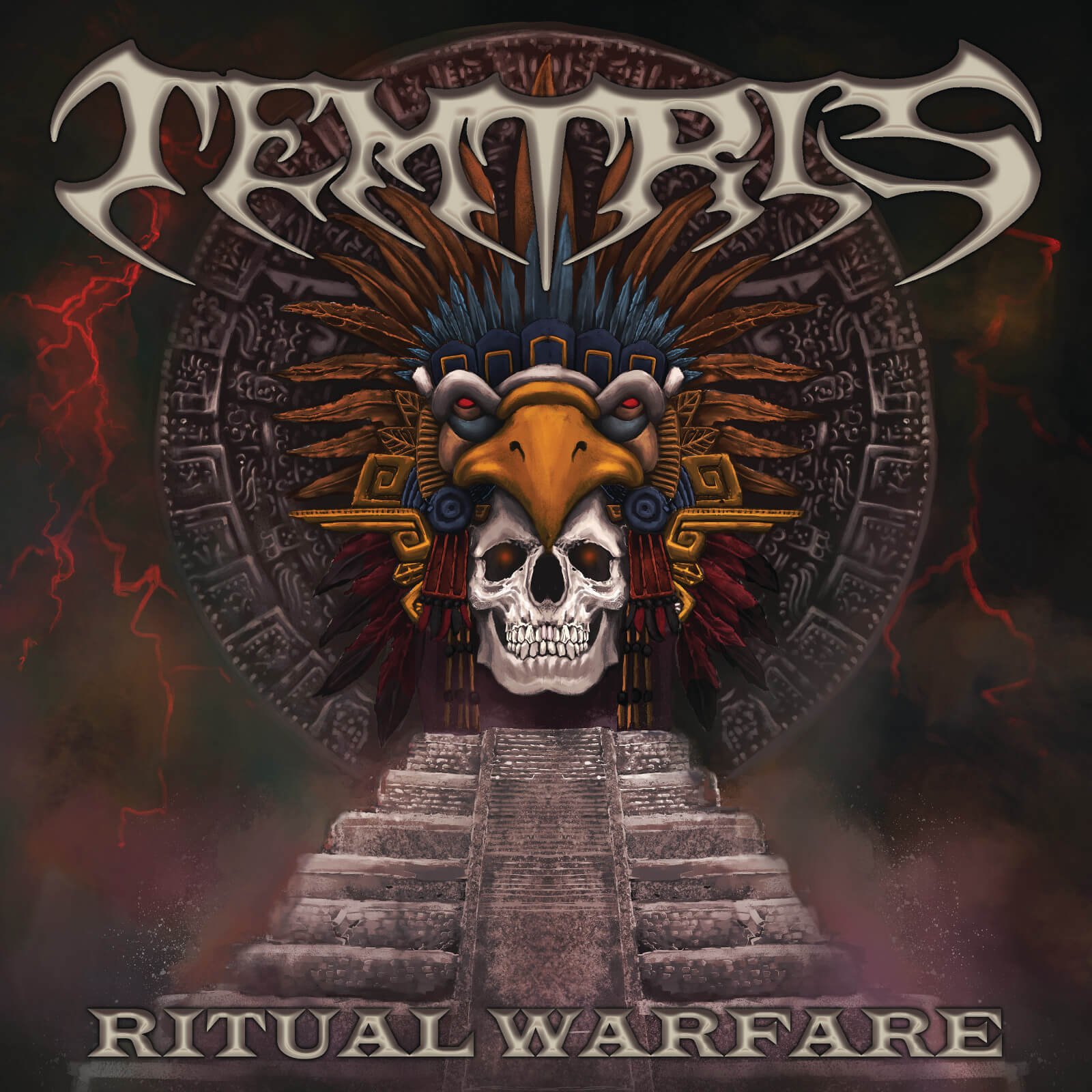 Back to the new album. With a new label normally comes one or two new person(s) to mix and master “Ritual Warfare”? Who did the job this time?

“Ritual Warfare” was actually recorded, mixed and mastered by the same as “Rapture”. The only difference was we recorded the cymbals live and have become better at song writing and production. Fox spent many hours in the studio getting things just right before we sent it off to Lord Tim to be mixed.

The pre-reviews for “Ritual Warfare” are all very positive and promising. Since this is your 6th album already, how would you describe the growth with each album and were you confident enough that you could exceed your much acclaimed previous album “Rapture” when you started writing songs for “Ritual Warfare”?

Yes, the reviews are extremely positive. There is always the pressure to produce a better product and that can be stressful. The TEMTRIS crew spent many hours making sure the songs on this album were full of catchy choruses and left you with the riffs that stuck in your head, so the songs would grab the audience and listeners. Everyone in TEMTRIS helped co-write on this album and it came together so well. We are very proud of what we have produced.

Obviously, you’re going to promote the new album by a small tour in Southwest Australia. How is that even possible while the rest of the world is still in lockdown? Are you going to promote it outside Australia through a streaming concert?

We decided we would risk booking a small tour. Hopefully more dates can be added. Things are very good here in Australia with nearly all restrictions gone. Fingers crossed it can stay this way for the months of May and June. TEMTRIS would love to tour overseas but that is not currently possible, so maybe next year we can look into that.  A livestream gig may be an option but is definitely not as good as a live show. 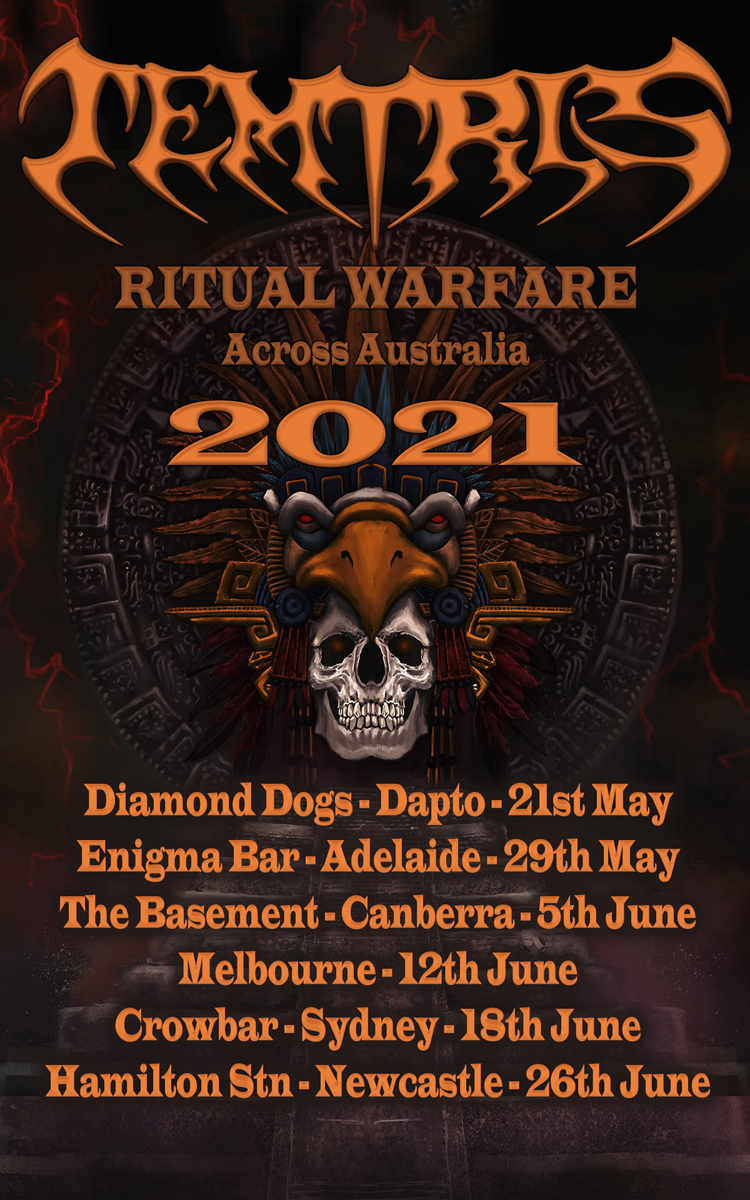 Final question: if you were granted 5 minutes of airtime on an international tv station through a satellite that would reach the entire world, what would your message for mankind be?

Tough question, but I’d ask everyone to be kind to each other and not judge someone until you have walked in their shoes. You never know what a person is dealing with in their own life and no one is better than anyone else… I’d definitely tell people to check out TEMTRIS too and play some metal, Haha, I’d be crazy if I didn’t.

Thanks for your time! Genevieve/ TEMTRIS