IT’S NOT OFTEN THAT A BAND CHANGES THEIR NAME, BUT SOMETIMES THERE IS A PROBABLE CAUSE TO DO SO. BELGIAN SYMPHONIC/PROGRESSIVE METAL BAND ANWYNN HADN’T RELEASED ANYTHING SINCE THE EP “SWORDS & BLOOD” IN 2015 AND CHANGED THEIR NAME INTO INHUMAN LAST YEAR. ALSO, THEY REDIRECTED THEIR STYLE TO SYMPHONIC DEATH METAL. ON FEBRUARY 26TH, INHUMAN‘S SELF-TITLED ALBUM WILL BE OUT. ALL IN ALL ENOUGH REASONS TO CHECK A FEW THINGS OUT WITH SINGER ELINE VAN DE PUTTE AND KEYBOARDS PLAYER ASTRID KAISERMAN. 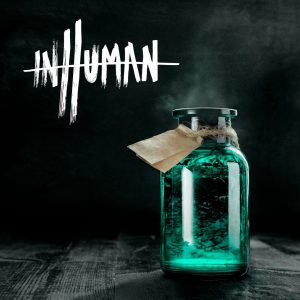 Let’s start with the name change from Anwynn to INHUMAN. When exactly did you decide to change the band name and what was the direct cause?

ASTRID: The process of changing the band in itself has been very progressive, over several years. It came naturally with the change of musical style, the drifting away from the folk-metal world, the much more aggressive sound, the different imagery and lyrics and the changes in line-up. Over the years, it became obvious that we were becoming less and less what Anwynn used to be. Surprisingly, changing the name itself has never been seriously contemplated until recently – probably because of the emotional attachment that we both still had to Anwynn and everything that it represents.

ELINE: We started contemplating the name change a little over a year ago, towards the end of 2019. At the time, the album was already recorded, the video clips were done and we had already started playing our new material live. It was also right after our long-time co-lead vocalist had left the band, concluding an era during which we were plagued by a lot of line-up changes. The newer members of the band, like our drummer Yüki and our guitar players Eerik and Romain had been attracted to us mainly because of the new musical direction we were taking and did not feel that much affinity towards the project Anwynn anymore. So it was basically all their fault. 🙂 Kidding, of course. We were reflecting together on all the changes that were made – the music, the visuals, the atmosphere, the lyrical themes, the people… we didn’t look like Anwynn in the slightest anymore. Then it hit us: why not change our name as well? It would be the perfect culmination of the transition that had already happened. If there was ever a right time, now was it. It felt fitting, it felt right, to everyone in the band. So we decided to just go ahead and do it.

How did you come to INHUMAN and are you aware that there are already numerous bands in several genres with that same name?

ASTRID: When you look at our lyrics, they revolve around the same thing that fascinates us: the human condition, in all its manifestations. How humans feel, think and function, how we are guided by our emotions, how we try to manipulate them and others, how we strive to stay alive through, despise, because of them. I am also a psychiatrist, so the lyrics that I write are heavily influenced by clinical settings of human emotions and dysfunctions. “No Bullet Required“ for example is about schizophrenia and “Unbearably Human“ is about psychopathy.

ELINE: This is why we felt that our band name should reflect exactly that. As you say, we quickly discovered we are not the only ones who ever came up with that idea. But, the other bands who share our name are scattered all over the world, so the chances of us ending up on the same bill are very, very small. They also play very different genres and sound very different to us, so it’s not really possible to confuse us for them or vice versa. Finally, “InHuman” really does represent the band as it should and no alternative quite measured up to it, so the decision was easily made.

Your new website says in big capitals: “A POUNDING, SYMPHONIC BULLDOZER OF HUMANITY – THAT IS INHUMAN”. That needs some explanation…

ELINE: We needed something short and catchy to accurately describe our sound; the heavy aspect of the tight riffs and the furious drums and the larger-than-life feel of the orchestrations. We really went for an overwhelming sound that takes you whole and we felt that this phrase tells you exactly that.

The lyrics that I write are heavily influenced by clinical settings of human emotions and dysfunctions.

Looking at the new line-up and comparing that to Anwynn’s, there have been a few changes. First of all, Vincent Carton was replaced by Dietwin Elbers. Why?

ELINE: Vincent Carton rather abruptly decided he no longer wished to be part of the band, so we had to respect his decision. After a brief period of focusing on our gig schedule (which we were able to maintain thanks to our good friend Kelly Thans stepping in on short notice, and killing it), we launched the search for a new vocalist. Dietwin responded to the call and proved to be a good fit.

Without delving too far into all the line-up changes, you reduced the amount of guitarists from 3 to 2. In what way does that infect the sound of INHUMAN compared to Anwynn?

ELINE: I think you’re confusing us with our pals of Iron Maiden (it’s OK, we get that all the time 🙂 ), but we’ve always had two guitar players.

So far, you have already released 3 videos from the self-titled INHUMAN debut album: “Clockwork In The Past” (official video), “Unbearably Human” (official video) and “The Chosen Cancer” (official lyric video). That’s quite a few for an album that’s not even out yet and will be released independently…

ELINE: It definitely is and by the time this interview comes out, there’ll even be a fourth one (“Unfolded” – see below)! But it’s not totally unheard of; more and more bands choose to focus the majority of their releases before their album comes out, to generate a maximum of buzz for it.

ASTRID: And I actually think that makes a lot of sense artistically, too. To me, at least right now, an album isn’t just an album of music – it’s art, period. I absolutely love the multiartistic aspect of releasing a song: the music with its composition, lyrics and arrangement, yes; but also the visuals, the video, the symbolism, the messages; the live-show that follows it, the merch that accompanies it. I want people to delve into all of those aspects at once, song by song, fully, and be immersed in it. And what better way to start that process than with a video?

Speaking of “InHuman”, the album, what are you trying to say with the cover art, the flacon with the green substance inside and the nameless label?

ELINE: The answer to that one can actually be found in the video we released for “Unbearably Human”.

ASTRID: The vial encompasses human emotion. It’s so hard for us humans, sometimes, to find them and feel them, that sometimes it would be easier not to – or to be able to swallow them in liquid form.

If someone would ask you to name 3 of your favorite tracks from the album and describe them, which ones would that be and what would you say about them?

ELINE: This is a really difficult question, because I like different things about different songs on our album. But, if I really have to choose (spoiler alert: vocalist bias), I’d say my first favorite is “Unfolded”. It’s raw, its orchestrations are very a-typical and the vocal dynamics are interestingly put together. I also really love “No Bullet Required”; it’s one of the very first songs we started writing all those years ago and I LOVE singing it. It’s got a very haunting melody, which tricks you into thinking it’s a sweet song, but it actually drags you down into the depths of despair. Then finally I’d have to say “For The Life Of Me”, because it proves that, just because something is ‘symphonic’ and the main vocals are clean, it does not mean the song is not heavy or aggressive.

ASTRID: Yeah, definitely a hard question – I’ve heard these songs for so long, at every stage of their creation, that I’m almost sure I don’t have any objectivity left. But right now, purely in terms of music, I would choose
– “The Chosen Cancer”: because it’s a kickass opener, brutal, groovy and catchy. I think it’s a good summary of what INHUMAN is.
– “No Bullet Required”: because of everything Eline said and because it’s about schizophrenia, a pet subject of mine
– “The Day I Died”: because we are telling a story through it from beginning to end, both lyrically and musically – and you all know by now how much I love cohesion and concept. 🙂

We didn’t look like Anwynn in the slightest anymore. Then it hit us: why not change our name as well?

The album has some stunning orchestral contributions by the Ghent University Choir. Who came with that idea?

ELINE: When we were looking for people to sing in our choir, a friend of mine came up with the suggestion to ask them if they’d be interested. I e-mailed them, they asked their members and quite a few responded! They were also kind enough to let us use their rehearsal room, which was a major help. Very happy they decided to join, they absolutely blew us away.

Both Eline Van De Putte and Dietwin Elbers recorded their voices at the Vamacara Studio in France and not at bassist Julien Huyssens’ Nomad Studio in Belgium. Any particular reason for that?

ELINE : At the time of recording, Vincent Carton was still part of the band, so he’s the one you can hear on the album. When we were planning the recording, Julien was an obvious choice for us. We’ve known each other for very long and he’s extremely good at what he does. He is safe and familiar, which has particular advantages when you’re recording vocals. Except these vocals had been written to not be safe and familiar; they were experimental and explore a large range of techniques and emotions. This is why we decided to throw ourselves off the deep end and go to another producer, so we could step out of our comfort zone, be challenged more and see what their take on our vocals was. The results were exactly what we were aiming for and our experience at Vamacara Studio was a good one.

How do you plan to promote ‘InHuman’ after the release on February 26th, as gigs with an audience won’t still be allowed by then and maybe long after that?

ELINE: We will probably continue to build our online presence and be creative with that. As a lot of bands have already proven, there are plenty of possibilities to continue to reach your audience and expand the reach of your music. Meanwhile, we are in the market for some serious soul-selling to the first devil that will take us, so this COVID-madness can end already! We are dying for a proper release party.