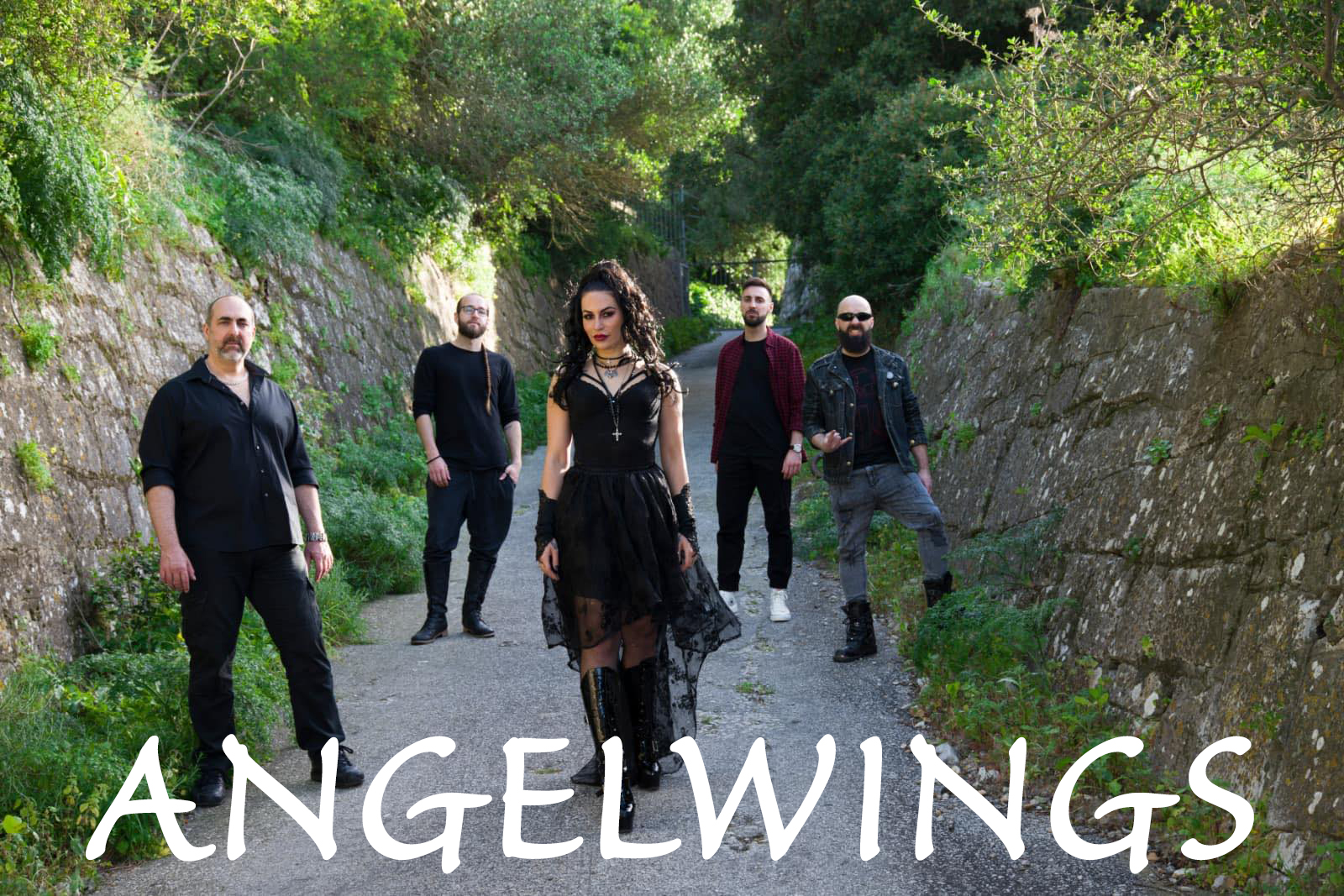 THE MAGIC OF MYTHOLOGY

Gibraltar based symphonic metal band ANGELWINGS have just released their highly anticipated second album “Primordium” on Pride & Joy Music. For the lyrics, singer Davinia ‘Divi’ Cano went back to the very beginning of time, although the story (both that of the evolution theory and according to the Bible) has a slight change of perspective. Divi explains how and keyboardist Glenn Cano gives her a helping hand in this interview…

HELLO DIVI. FIRST OF ALL, HOW ARE YOU DOING? I’VE READ THAT YOU ARE RECOVERING FROM A SURGERY?

Divi: Hi, it’s a pleasure to do this interview and thank you for asking. I’m doing well and yes, I’ve recently come out of surgery, I had a microdiscectomy and it’s a bumpy road with a lengthy recovery period of about a year but as with many tough situations in life, I’m taking it day by day, I’m just so grateful to everyone who has helped and supported me through one of the toughest and scariest moments of my life: from doctors to family, friends and even strangers. Very big thank you to them all. 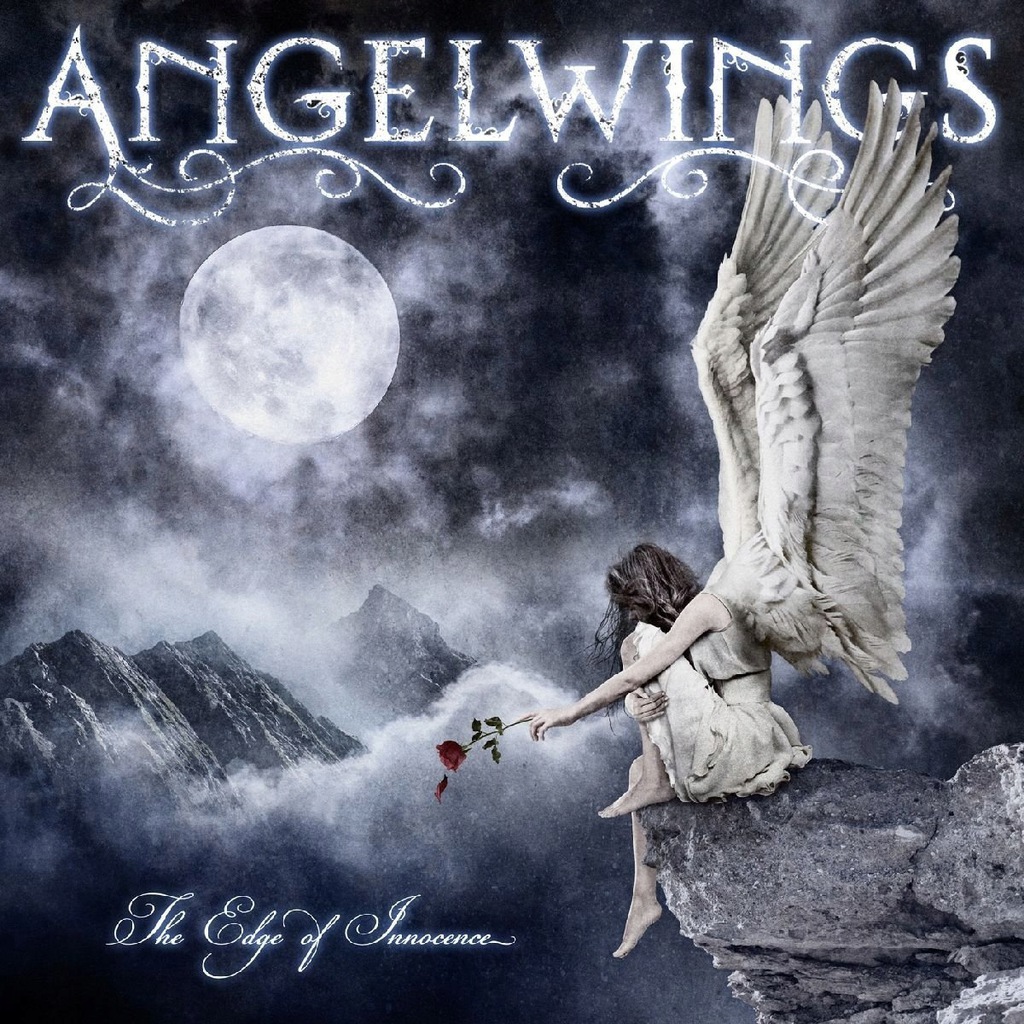 ANGELWINGS’ DEBUT ALBUM “THE EDGE OF INNOCENCE” WAS RELEASED IN 2017 AND ONE YEAR LATER, HALF OF THE BAND WAS REPLACED, EXCEPT FOR YOU, GLENN (KEYBOARDS) AND ISMAEL (DRUMS). WHY?

Divi & Glenn: Once our debut album was out, it was clear who struggled to keep up with the bands commitments, be it for family, work or personal reasons. We therefore had to be realistic and sadly as well as some decided to leave, others we had to let go.

YOU TRAVELLED TO MONTPELLIER IN FRANCE AND STARTED RECORDINGS FOR YOUR NEW ALBUM “PRIMORDIUM” IN AUGUST 2020. WHY THERE AND WHO IS THE PRODUCER?

Glenn: Tower Studio in France is run by our friend Brett Caldas-Lima, who mixed and mastered our debut album. This time ’round we paid him a visit to record guitars and vocals. He helped us greatly during the recording process. All aspects of song creation were done by us though, with Brett giving the final touch to our sound.

THE ‘ENCYCLOPAEDIA METALLUM’, BETTER KNOWN AS ‘METAL ARCHIVES’, STATES THAT DRUMMER ISMAEL VIERA GIRALDO IS NO LONGER PART OF ANGELWINGS SINCE 2020, BUT CAN HE STILL BE HEARD ON “PRIMORDIUM”?

Glenn: Ismael made all the drum parts in “Primordium”, but after we finished he left the band due to personal reasons. We sent all his tracks to Leo Margarit to be professionally recorded.

ARE YOU LOOKING FOR A NEW DRUMMER? AS THERE IS NO SUCH POST ON YOUR FACEBOOK (NEITHER THAT ISMAEL HAS LEFT THE BAND) AND ON YOUR LATEST PROMO PICS ARE ‘ONLY’ FIVE PEOPLE.

Divi: Yes, that’s right, we are currently holding auditions and looking for a new drummer. 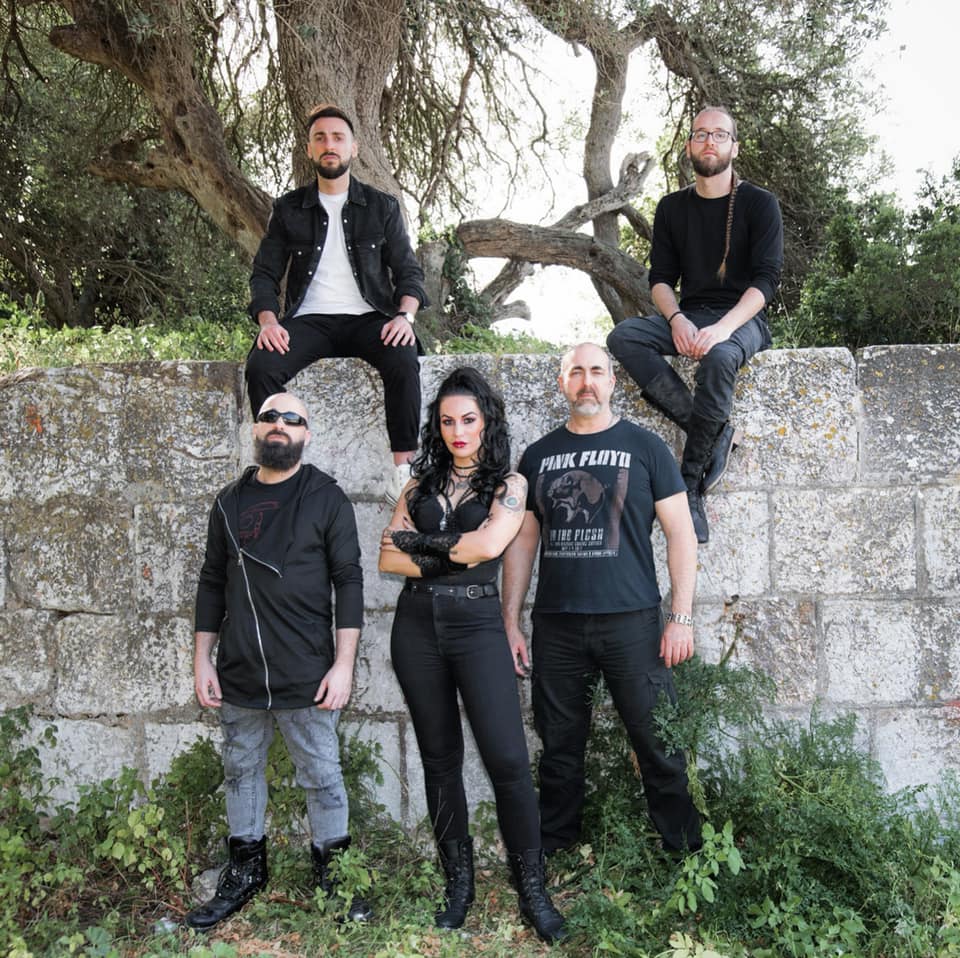 IN APRIL 2021, YOU WROTE: “PRIMORDIUM” IS A CONCEPT ALBUM AND WE TAKE YOU ON A JOURNEY ALL THE WAY BACK TO THE VERY BEGINNING OF TIME… FROM THE CREATION OF LIFE ITSELF TO ONE PARTICULAR DEEP, DARK MYTH.  CAN YOU ELABORATE A LITTLE BIT MORE ON THIS CONCEPT?

Divi: The concept story follows the first album “The Edge Of Innocence”, except with “Primordium” I go back to the beginning, literally back to the creation of life itself- queue “Genesis” the first track on the album. It’s quite fitting as when God created Adam and Eve, in this version he created Adam & Lilith. If you understood the story behind the first album, first you would be able to tell that Lilith is the character I had chosen to represent me. The story is about my life, my journey but in the way of fantasy and then secondly, you’d be able to gather that I chose to use mythology as my main source of inspiration. Mythology is a subject that never seems to bore me and it opened my eyes to so many possibilities. Once you’re able to hear the album and know the lyrics, I’m sure that these elements will become apparent. I really do hope it’s something that most people can enjoy and appreciate. I certainly put all my heart and soul into it.

IS IT THE STORY OF THE EVOLUTION THEORY OR THE BIBLICAL STORY YOU ARE TELLING ON THE ALBUM?

Divi: Interestingly enough, it’s not about either of those things but then again, I understand how it can sound like the biblical story! What I’ve chosen to do is to use tales of mythology and write my own version which always include Lilith (who represents me), but I always keep many of the important key elements of each story/ character. I think it’s an awesome thought that people might be so interested that they look these stories up for themselves. If you love to read, it’s an interesting read too! You will find that mythology stories can coincide with biblical ones too. I personally feel like they could be the missing pieces of a much bigger tale and if you’re open minded, you can appreciate what this might mean! It certainly makes for fun writing, I tell you that! 😉 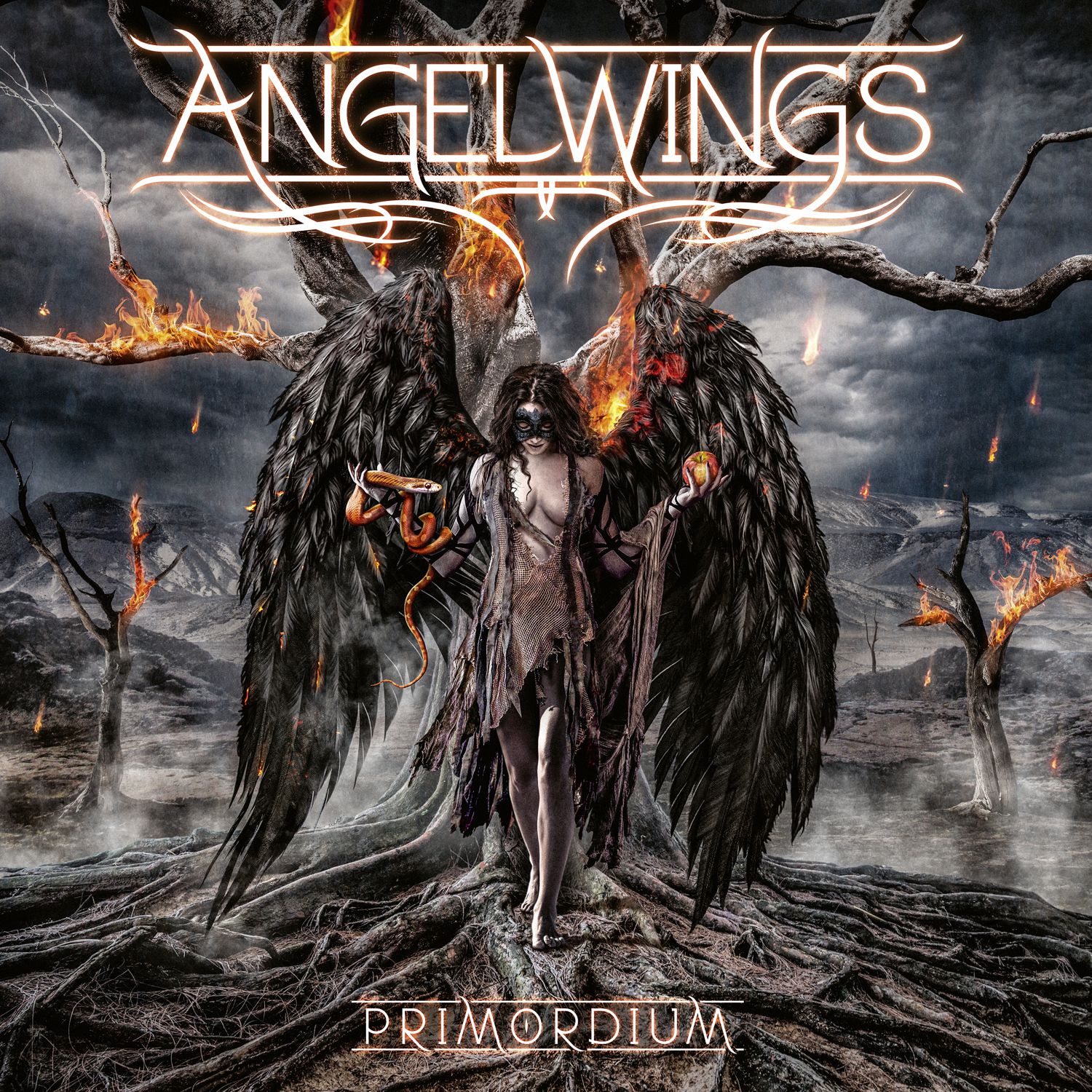 THE COVER ART FOR THE DEBUT ALBUM “THE EDGE OF INNOCENCE”, THE FIRST SINGLE OFF THE NEW ALBUM “FALLEN ANGEL SONG” AND THE NEW ALBUM “PRIMORDIUM” WAS MADE BY THOMAS EWERHARD. PEOPLE MAY KNOW HIM FROM HIS WORK FOR AVANTASIA, THERION AND AXEL RUDI PELL. WHAT WAS FOR ANGELWINGS THE DECIDING FACTOR TO GET IN BED WITH HIM AGAIN?

Glenn: Thomas’ touch is exactly what we were looking for as he made such an amazing piece of artwork for our debut album. We knew he would deliver in “Primordium” without a doubt. Everyone who has worked with Thomas can agree that he is so easy to work with, his talent is amazing as you can appreciate from our 24 page CD booklet!

“PRIMORDIUM” HAS, JUST LIKE THE DEBUT ALBUM, 10 TRACKS AND WILL BE RELEASED ON PRIDE & JOY MUSIC AGAIN. HOW MANY ALBUMS DID YOU SIGN FOR WITH BIRGITT SCHWANKE AND WHAT MAKES PRIDE & JOY MUSIC SO FITTING FOR ANGELWINGS ?

Glenn: We really appreciate Birgitt’s support, from day one she has always been there for us and helps us with any issues we may have. She answers almost immediately to our queries. We have built a trust between us, so for us it’s an easy decision to continue with her.

OKAY, WE’VE COME TO THE POINT WHERE WE WILL DISCUSS THE NEW ALBUM. GUITARIST CARLOS ALVAREZ IS DOING THE NARRATION AND MALE VOCALS ON THE OPENINGSTRACK “GENESIS”, WITH 10:33 MINUTES THE LONGEST TRACK YOU’VE EVER WRITTEN. I SUPPOSE THAT MEANS YOU COULDN’T AFFORD SIR DAVID ATTENBOROUGH, WHO’S FAMOUS FOR HIS VOICE OVER? 😊

Glenn: I think Sir David Attenborough is more concerned for animals and nature than for albums, hahaha. Carlos Alvarez from Dirty Viking Audio should not be confused with our guitarist Carlos Alvarez-Nava, amazingly they share the same name! Dirty Viking Audio did parts for us in our debut and so we gladly asked him to help us on “Primordium” too. 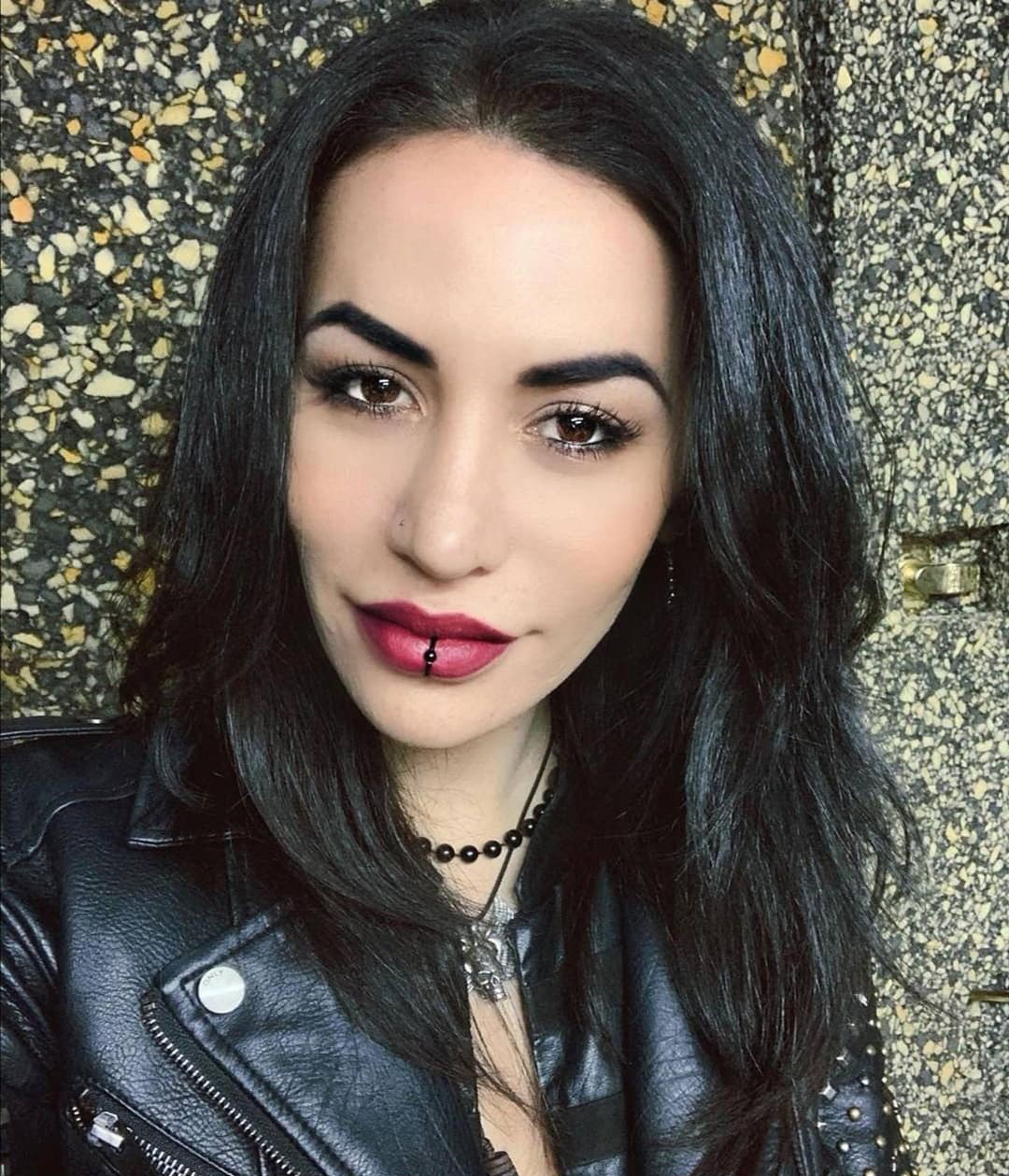 “SAIL AWAY” STARTS AS A BALLAD, BUT THEN QUICKLY PACES UP TO A TYPICAL ANGELWINGS SONG THAT WOULDN’T HAVE BEEN OUT OF PLACE ON “THE EDGE OF INNOCENCE”. IS IT A NEW SONG OR INDEED A TRACK THAT WAS LEFT OVER FROM THE DEBUT ALBUM RECORDINGS?

Glenn: It’s actually a new song sparked by David Duran. So no, it was not a track left over from our debut. Maybe the keyboards make it seem so which makes sense.

THE INSTRUMENTAL “DEHUMANISED” SEAMLESSLY MERGES INTO (FOR ME) THE BEST SONG ON “PRIMORDIUM”, “TRAPPED”. WHAT IS IT ABOUT AND DO YOU HAVE A FAVOURITE TRACK AS WELL?

Divi: I’m happy to know that “Trapped” is your favourite song! For me personally it was a song that lyrically was coming out so easily, but actually getting through it, actually writing it down on paper and getting it all out, was so very difficult… this song is the only one I am open about – no hidden meanings or messages, just my heart on my sleeve, broken… and it’s not something I do but this time was definitely an exception. There was no way I was going to be able to do this any other way, I was going to make it so real that the only way out of this pain I was feeling, the only way to begin healing, was to get to the end of this song! And that’s exactly how it went! 😉 Aren’t heartbreak songs a joy! But on a lighter note, what’s my favourite song?? MY favourite song!?… hahaha, I couldn’t even tell you! As the band and Brett can verify, EVERY song was my favourite song! I’m not even kidding! By the time we reached the last few tracks we were recording at the studio, everyone would mock me and say “Divi! Your favourite song!” Hahaha and they weren’t wrong! But gun to my head, I’d have to say “Nature’s Lullaby”… And “Lies & Secrets” !! All of them! 😀 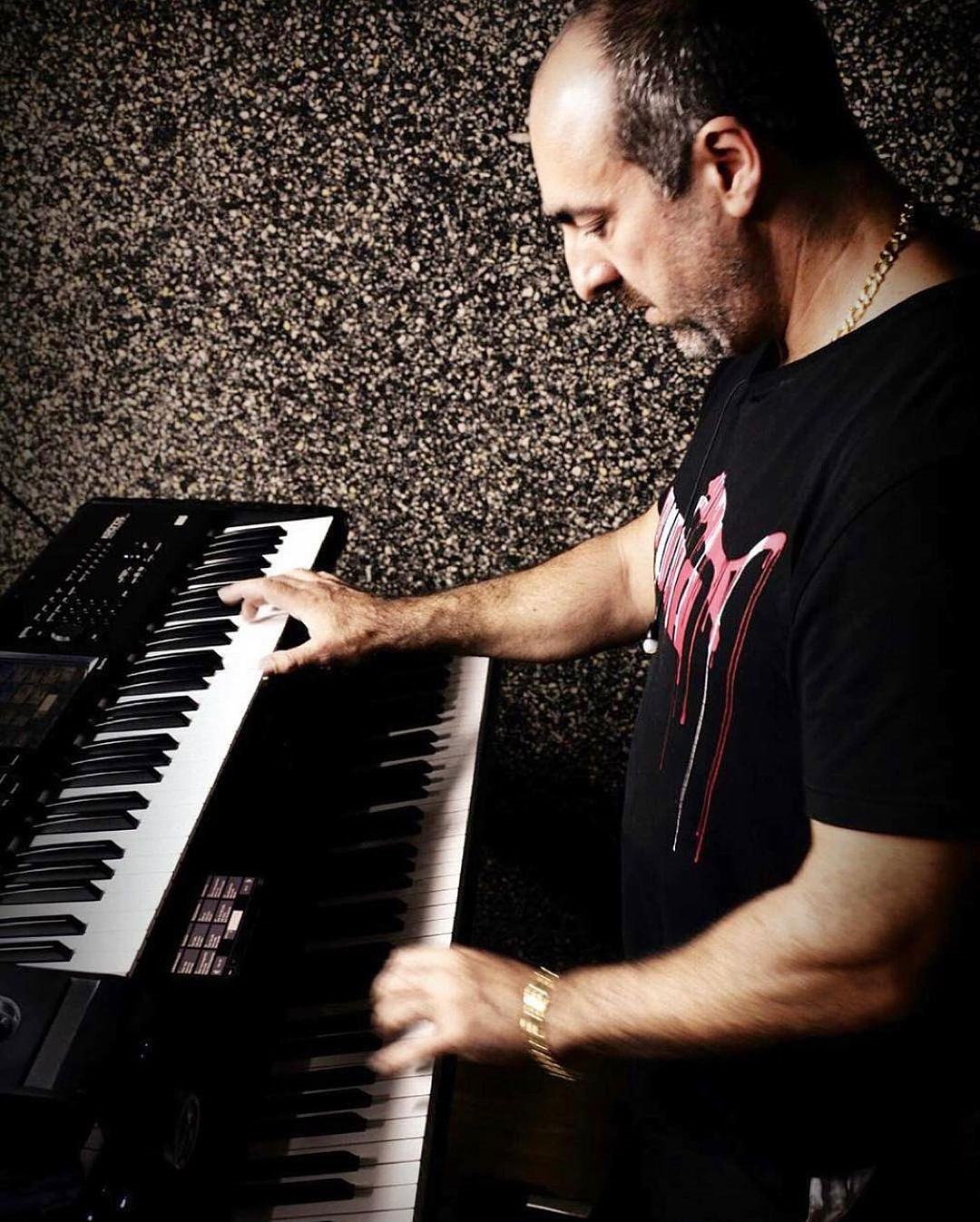 ALTHOUGH KEYBOARDS ARE STILL PLAYING A MAJOR ROLE IN YOUR MUSIC, IT SOUNDS LIKE THE WHOLE ALBUM IS A LOT HEAVIER THAN THE DEBUT ALBUM.

Glenn: Even by the end of the writing process of our debut album, we already knew we wanted it to be heavier. Having two guitarists surely makes it more interesting too, especially since we all come from different musical backgrounds. We are very happy with the end result mixture of guitar work and keyboards.

FINAL CONCLUSION: I MUST SAY THAT “PRIMORDIUM” IS A BIG STEP FORWARDS FOR ANGELWINGS IN TERMS OF COMPOSITIONS, BUT I DO MISS STUNNERS LIKE “WONDERLAND” AND “THE EDGE OF INNOCENCE”. SONGS THAT WILL HAVE FANS SING ALONG DURING CONCERTS. DO YOU SHARE MY VIEW ON THIS?

Glenn: I think we have evolved somewhat and taken a new direction that has come naturally for us without forcing to be similar to any previous tracks, although I do believe we have kept some of that ANGELWINGS magic from our debut. In part you may be right, but I personally think that there are many parts in this album which still has a great sense of emotion and I am sure fans that feel this too would join in and sing along.

LAST QUESTION. THE MYSTIC EUPHORIA PROJECT (LUC GERMAIN) HAS JUST RELEASED A NEW SINGLE/VIDEO FEATURING KARIN MONNT ON VOCALS. DIVI, ARE YOU GOING TO DO ONE SINGLE FOR THEM AS WELL THIS YEAR?

Divi: I listened to some great tracks he sent me and I even had some great ideas, wrote some lyrics down too. When I can, I would love to get back to that and release my first single with him. 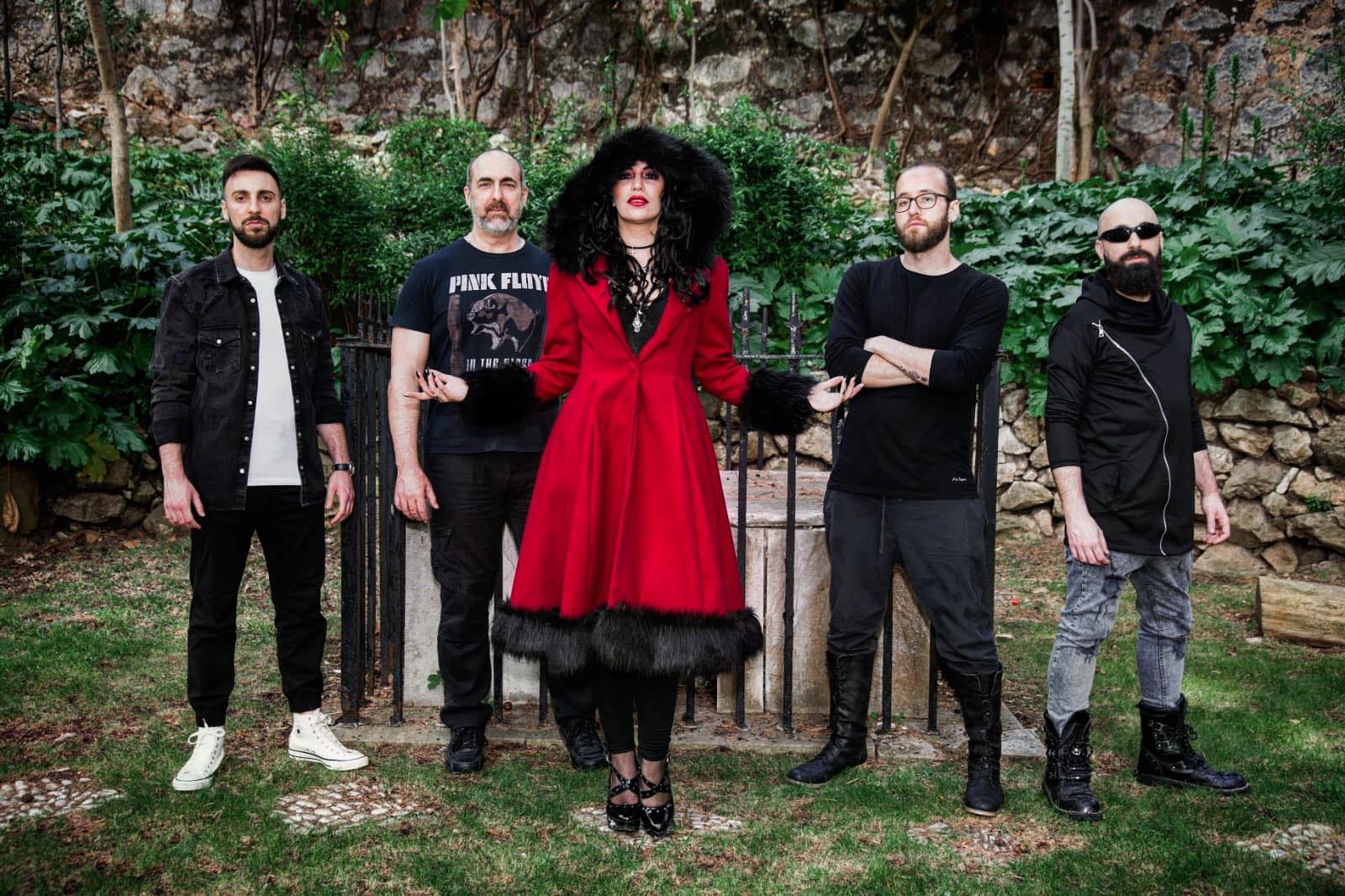