And Then She Came. Not only the name of a German symphonic metal band fronted by Ji-In Cho, but the phrase also fits very well to this ‘newcomer’ and leading lady of symphonic metal band SCARLET DESIRE and progressive symphonic metal band VENGEANT. Both bands can also be regarded as ‘newbies’ in the metal scene and both released a single earlier this year. So we thought it was about time to introduce to you the muse from Greece with the most beautiful name, the lovely and stunning beauty Danae Komodromou. 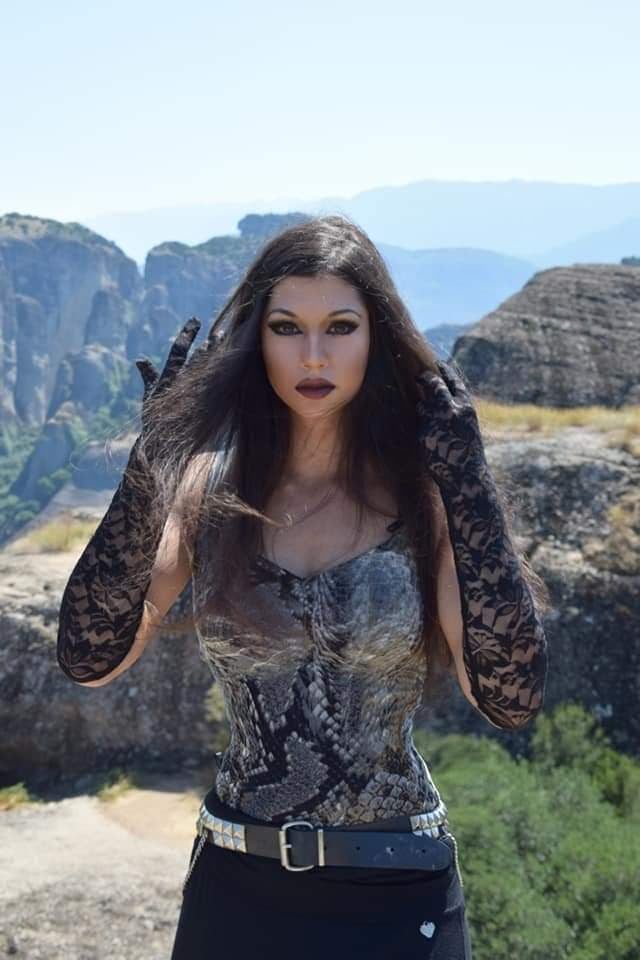 Welcome Danae, nice to have you on this interview. How are you doing?

I was quite obsessed by your beautiful name. Does it mean anything?

Thanks for your kind words. Danae is an ancient Greek name and originates from the Indo-European root -Da(n), which is associated with water. We can see the same root used in the names of many European rivers, like Danube and Dnieper. The best-known person with that name from the ancient Greek mythology was Princess Danaë, daughter of King of Argos Acrisius and mother of Perseus. Acrisius, quite scared by the prophecy that wanted him killed by his grandson, locked Danaë inside a bronze chamber, open to the sky, to keep her childless. However, according to the myth, Zeus entered the chamber in the form of golden rain and Danaë conceived his son, who later killed his grandfather and founded the Kingdom of Mycenae.

You’re an educated classical soprano, piano player and composer. Where did you learn all this?

I began to take piano lessons at the age of seven. When I was ten, I obtained the first prize on a TV kids song competition, and that was the starting point for opera singing lessons. I graduated from Eratio Conservatory in Greece when I was 16, and five years later I completed the bachelor course in opera performance at Trinity Laban Conservatoire of Music and Dance in London. Right after, I completed my piano studies in the same Greek conservatory and later I met Rossitza Troeva, an amazing mezzo soprano and person who used to perform in Teatro alla Scala, Milan, who taught me how to sing in many different styles. In terms of music composition, I’m self-taught, and my composition skills evolve by practicing and studying the great classical and modern composers. 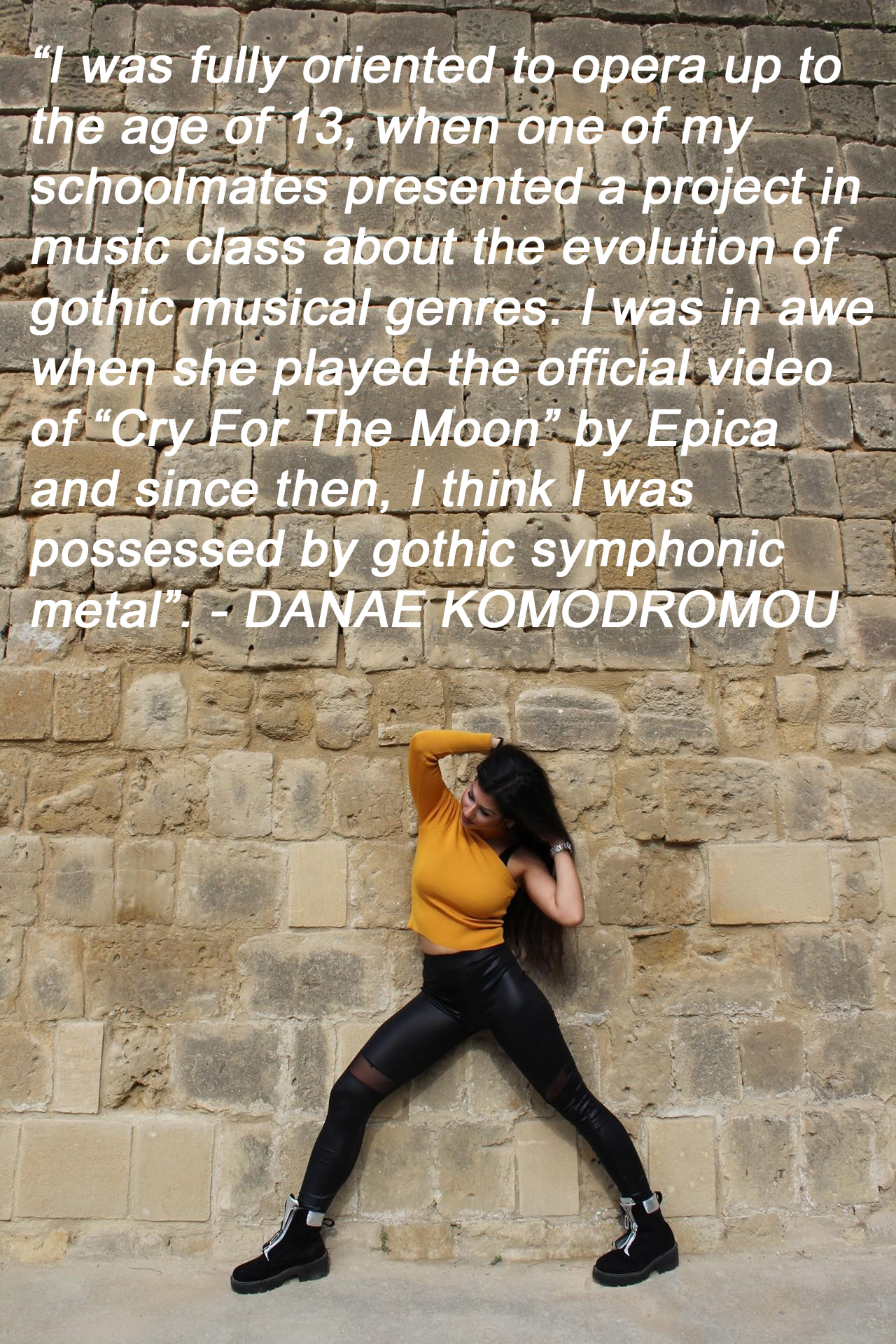 I would expect you to sing in some high class opera house in Milan, Paris or Sidney and not on stage or in the studio with a bunch of long-haired or bearded metal guys. How did you get involved with the metal world?

I was fully oriented to opera up to the age of 13, when one of my schoolmates presented a project in music class about the evolution of gothic musical genres. I was in awe when she played the official video of “Cry For The Moon” by Epica and since then, I think I was possessed by gothic symphonic metal. Then I discovered more metal subgenres and since then, metal music resides in my soul. I started to sing in school bands when I was 15 and give concerts, at the same time with classical performances. I had also uploaded material on YouTube, which didn’t go unnoticed – that was, in fact, how I met Esa and how my cooperation with metal bands started to develop outside the Greek boarders. Regarding metal, it didn’t really take too much effort to find the appropriate people to work with. But in classical music, things work differently. Maybe the right time for such a cooperation hasn’t arrived yet.

You started symphonic metal band SCARLET DESIRE with guitarist Esa Mikkola way back in 2014. In August 2020, you inked a deal with DI Records, but yet have only released 2 singles (“Cry For Your Name” in 2019 – and the instrumental version in 2020 – and “Maiden Of Snow” in 2021) and not yet a full-length album. When can we expect one?

We had lots of plans for last Summer, but the Coronavirus situation froze our activity. We are aspiring to have new developments next year, but I’d rather not reveal everything yet. 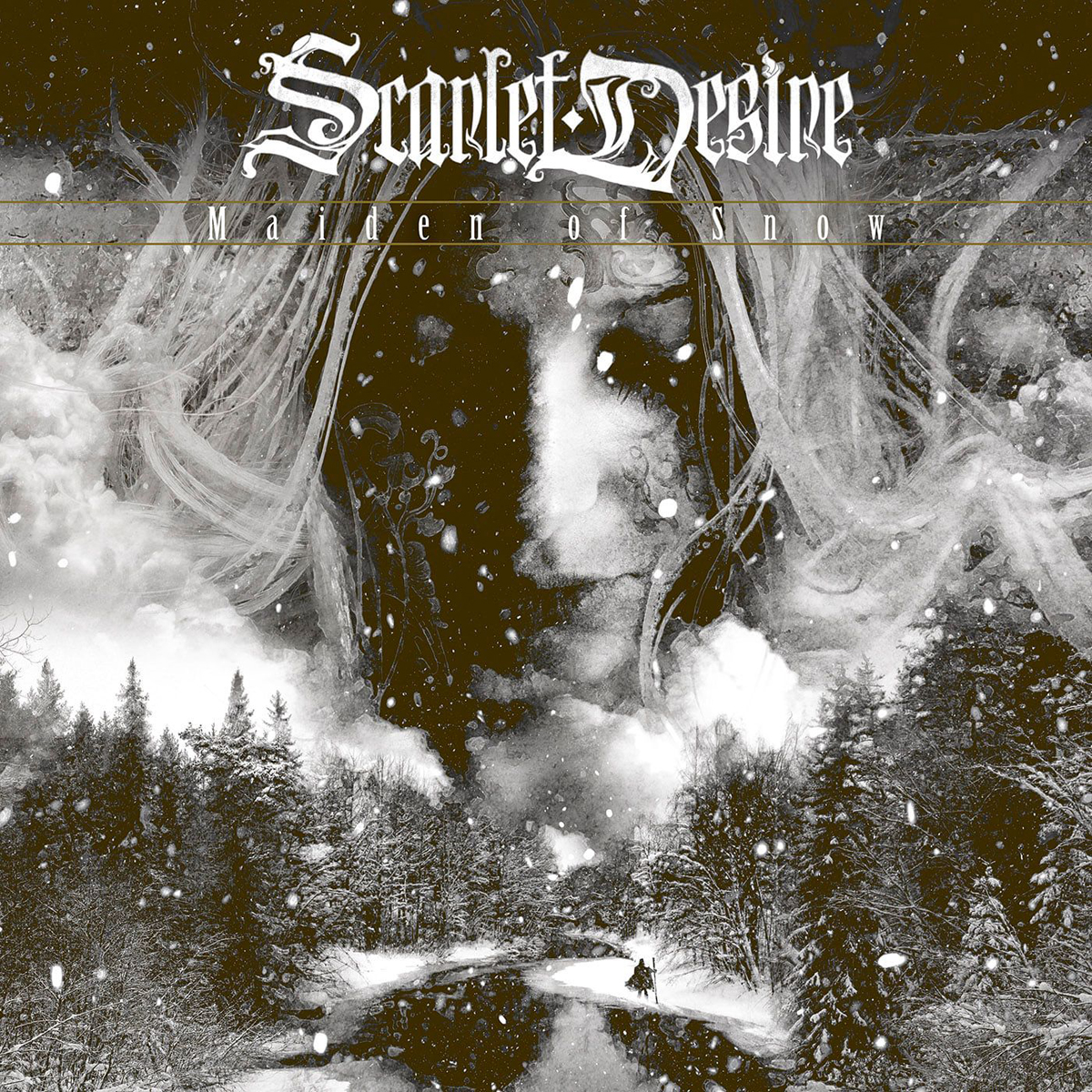 “Maiden Of Snow” is based on the Finnish mythology Kalevala. But since you’re a Grecian and live in Nicosia, did Esa explain the story to you, so you could write the proper lyrics in English?

When I first started to listen to symphonic metal, I found out that the vast majority of the bands I liked were from Finland. I was so absorbed by the Finnish culture and wanted to go as deep into it as possible so that my compositions would be carrying elements from folk Finnish tradition. I was fascinated by Scandinavian mythology and wanted to learn as much as possible. I thought that making a song inspired by the Kalevala, the great Finnish mythology book, would be an amazing chance for me to start gaining knowledge while studying from various sources to make a good song. Having read the same story about Ilmarinen, the blacksmith of the Finnish Pantheon in quite a few different versions, I conceived a poem which matched Esa’s music and could hear the vocal lines being born in my head at the same time. This is how “Maiden Of Snow” was made.

Let’s switch to your other project, VENGEANT. In what way are SCARLET DESIRE and VENGEANT different as it comes to vocal techniques?

Vocal technique is determined by the music and orchestrations I hear in the background. Our music in SCARLET DESIRE lies under the category of orchestral metal, whereas VENGEANT is more like melodic with symphonic elements. Ι use the lateral diaphragmatic breathing while singing in both bands; there is no other way to project your voice efficiently. However, I use cranial cavities much more in SCARLET DESIRE, where resonance and focus is necessary to complete the dark and emotional gothic orchestra, than in VENGEANT, where apart from the operatic parts, I am based on a rock/metal throaty sound to match Christoffer’s spectacular guitar playing. 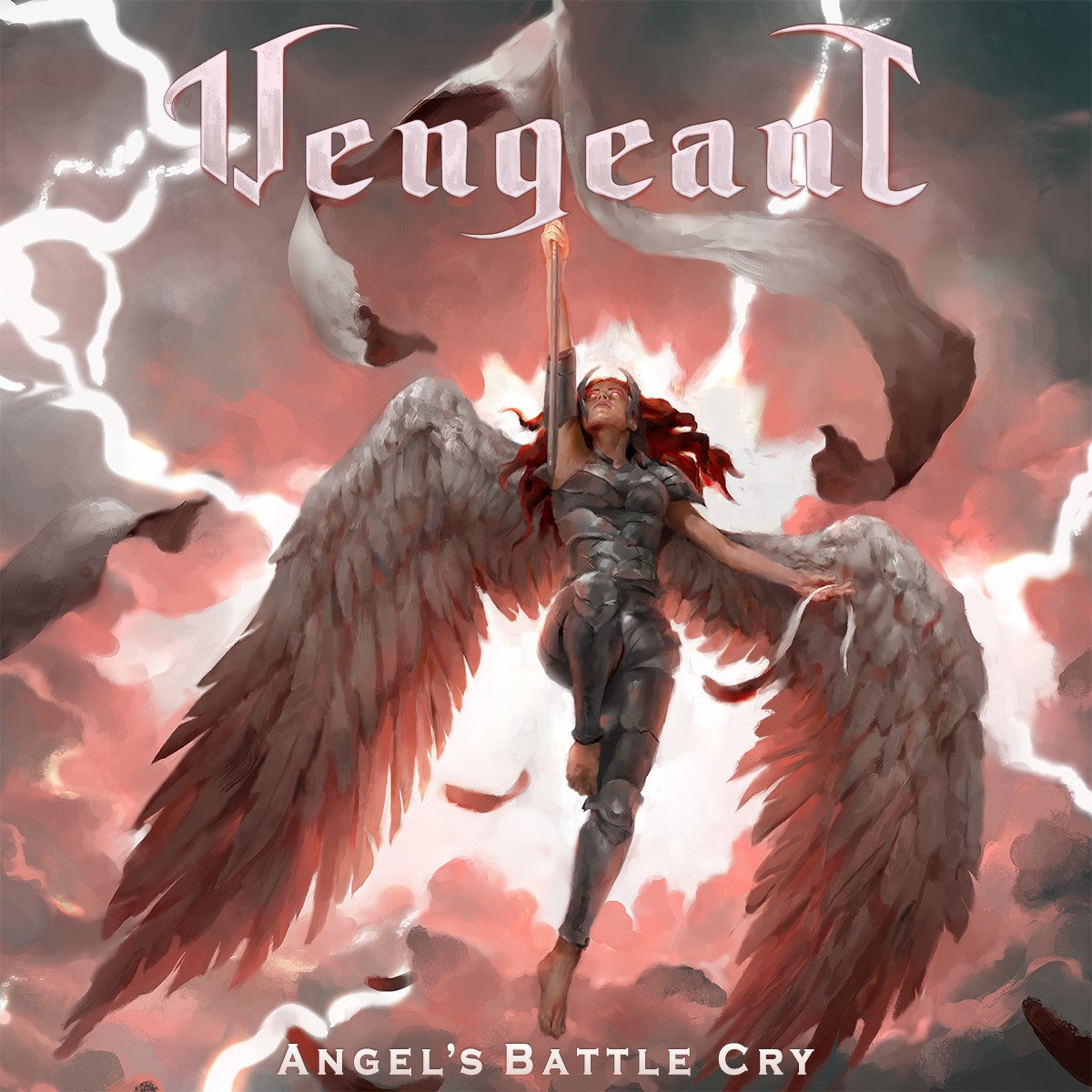 The first ever VENGEANT single, “Angel’s Battle Cry”, was released on February 12th and is inspired by the white mana of Magic: The Gathering. Can you tell us some more about that?

Yes, the song is inspired by the white mana, which is one of five colors of mana in the game. The entire band is inspired by Magic: The Gathering and so the upcoming four songs will also take inspiration from that.

Early this year, VENGEANT announced the first official line-up on their Facebook page: Danae Komodromou – vocals, Christoffer Holm – lead guitar & bass, Dennis Eriksson – rhythm guitar and Alfred Fridhagen – drums. But you also mentioned a 5-track EP. Are you still working on that or have you finished it yet?

You will be able to hear the full EP shortly. Apart from that, the band has already started writing new music and within a few months from now we will start to record the new material. 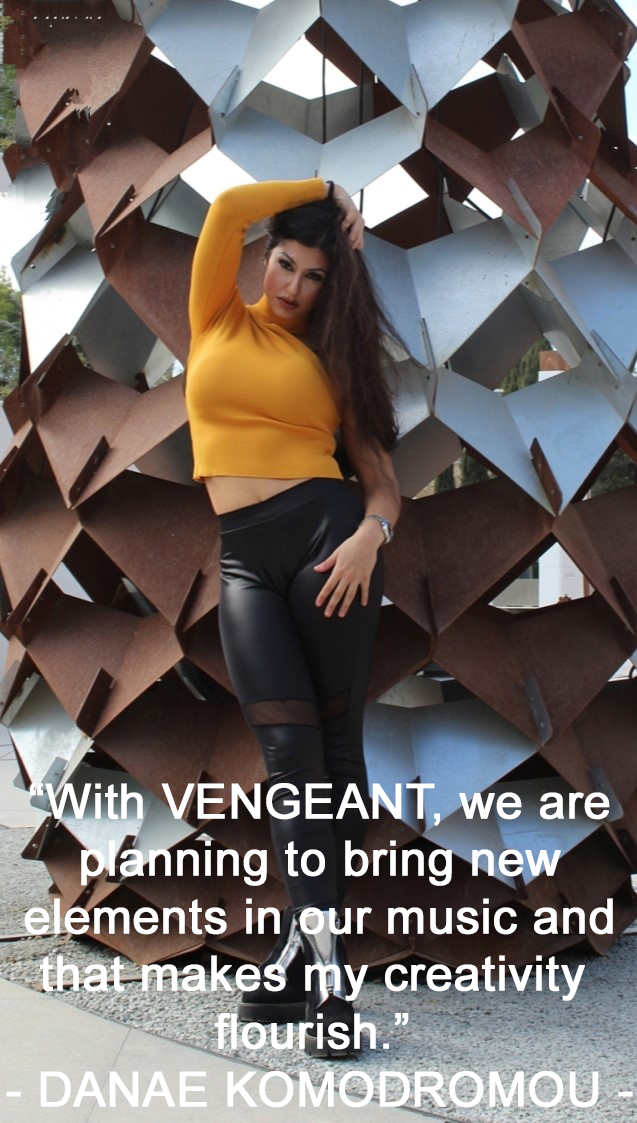 You had your birthday on February 17th. Have you been able to celebrate it with all the COVID-19 restrictions?

Actually, it was a very funny birthday! There was so much snow that day that I wasn’t able to even visit my mother. I spent it alone in my apartment in Athens, since it was also impossible for my friends to move. However, I chatted with them on the phone and various apps and was very happy to reconnect with people I hadn’t spoken to for a long time!

Epica’s Simone Simons is your favorite singer. In what way do you vocally match and if you could do a duet with her, which Epica song would you choose?

Simone was the artist who got me into symphonic metal. I was 13 y.o. when one of my schoolmates spoke about the evolution of gothic music in music class. She chose to play “Cry For The Moon” by Epica as a gothic metal sample. I was blown away by Simone’s simplicity and focused resonance. I was impressed to see how a singer in a metal band kept the contract with the breath all the way through and the warm and crystal clear colour of her voice over the epic choirs and orchestra was too unique for me to ignore.

Is there anything else you would like to mention about SCARLET DESIRE or VENGEANT that we haven’t discussed? Or are there any other secret projects you are involved with that we don’t know of yet? 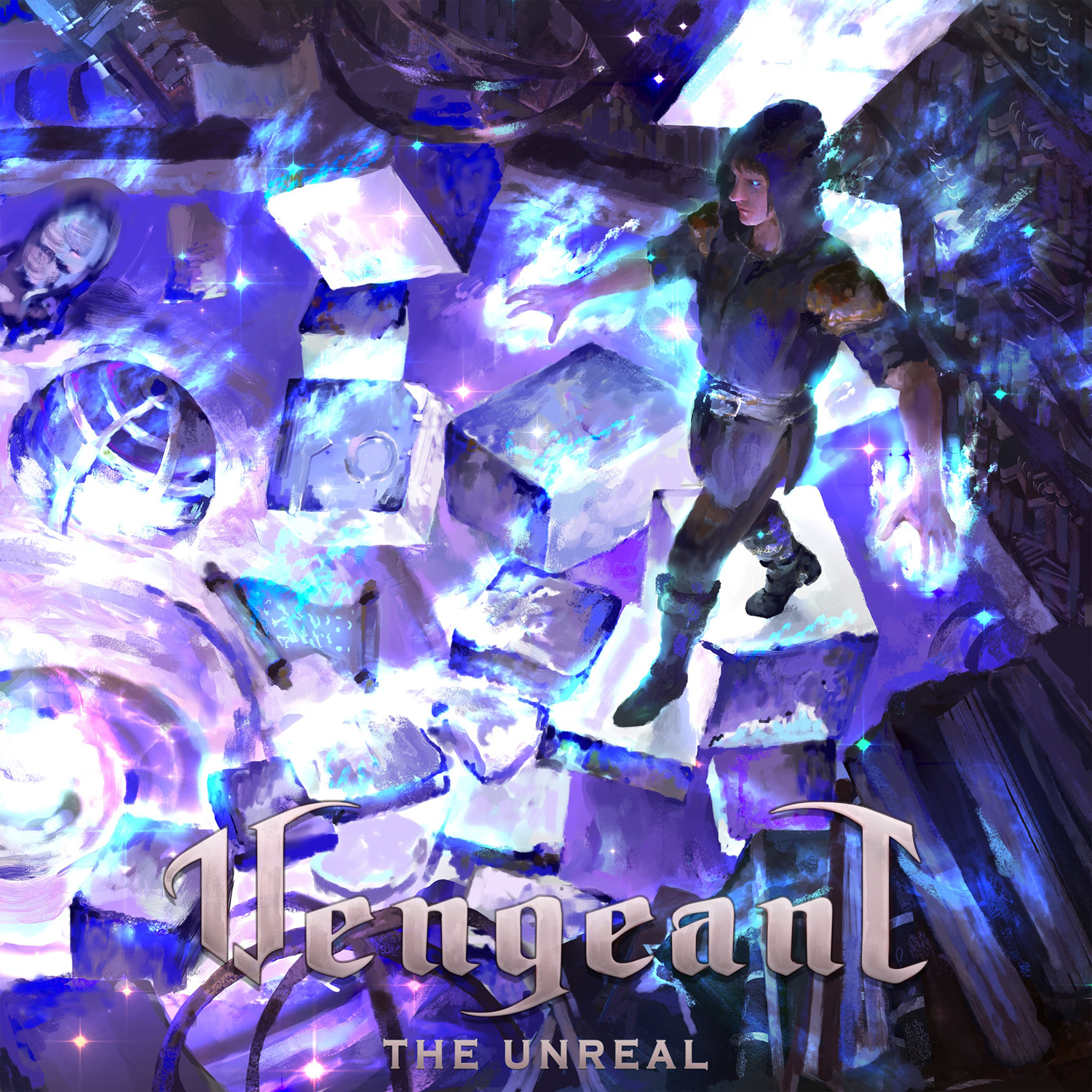 In SCARLET DESIRE, Esa and I have been writing music both individually and collectively. So far, we have released songs Esa created, with later modifications/additions by me. Soon though, we are planning to release songs I composed a while ago, and that makes me very excited, as they represent a very important part of my life. With VENGEANT, we are planning to bring new elements in our music and that makes my creativity flourish. Let me think… well, I would like to reveal some information about the «secret projects», but I think, what I like the most is surprises. 😉

VENGEANT will release a new single “The Unreal” on April 23rd, 2021. The song is inspired by the blue mana of Magic: The Gathering.

REVIEWS:
ETERNAL CLOSURE – At The Center Of It All – Chapter I
DEFACING GOD – The Resurrection Of Lilith
SYRYN – Heads Or Tails
SPLINTERED THRONE – The Greater Good Of Man
EMPRESS – Fateweaver