Brazil is not only the place to be for coffee, but they have an ‘awful lotta‘ very good female fronted symphonic metal bands over there as well. One of them is NO ONE SPOKE, who left us literally ‘speechless‘ after hearing their debut album “Nine Mirrors”. Not only the songs are all ‘excellent‘ rated, but their vocalist Carla Domingues is absolutely of ‘exceptional class‘. Thus, we wanted to know more about Carla, so we contacted her and sent her a couple of questions. Here’s what she sent us back…

Hello Carla. Please introduce the band and yourself to us first, for we know not much about NO ONE SPOKE here in Europe.

Hello!!! Thank you so much for the interview! I’m very happy and honoured with the oportunity to talk about our work… Well, we’re from Florianópolis, Santa Catarina, a beautiful island in the south of Brazil, and we are playing together under the name of NO ONE SPOKE since 2018. Around 2015, I had finished my work with a band called Enarmonika and I was inclined to not make another project. But, in 2018 I did some recitals with Thiago Gonçalves, and we started to exchange some ideas of a new band. He told me that Marcelo Rosa, a great guitar player from here, was interested too and so, after some conversations, we started the contact with other musicians and that’s how NO ONE SPOKE emerged: with me, Carla, Thiago, Marcelo, Gabriel Porto (drums), Iva Giracca (violin) and Thiago Moser (bass). Before the recordings of our two first singles, Marcelo had to leave the band, he moved out to Germany, and Moser had to turn his attention to some personal business, so André Medeiros and Artur Cipriani joined the band and here we are! 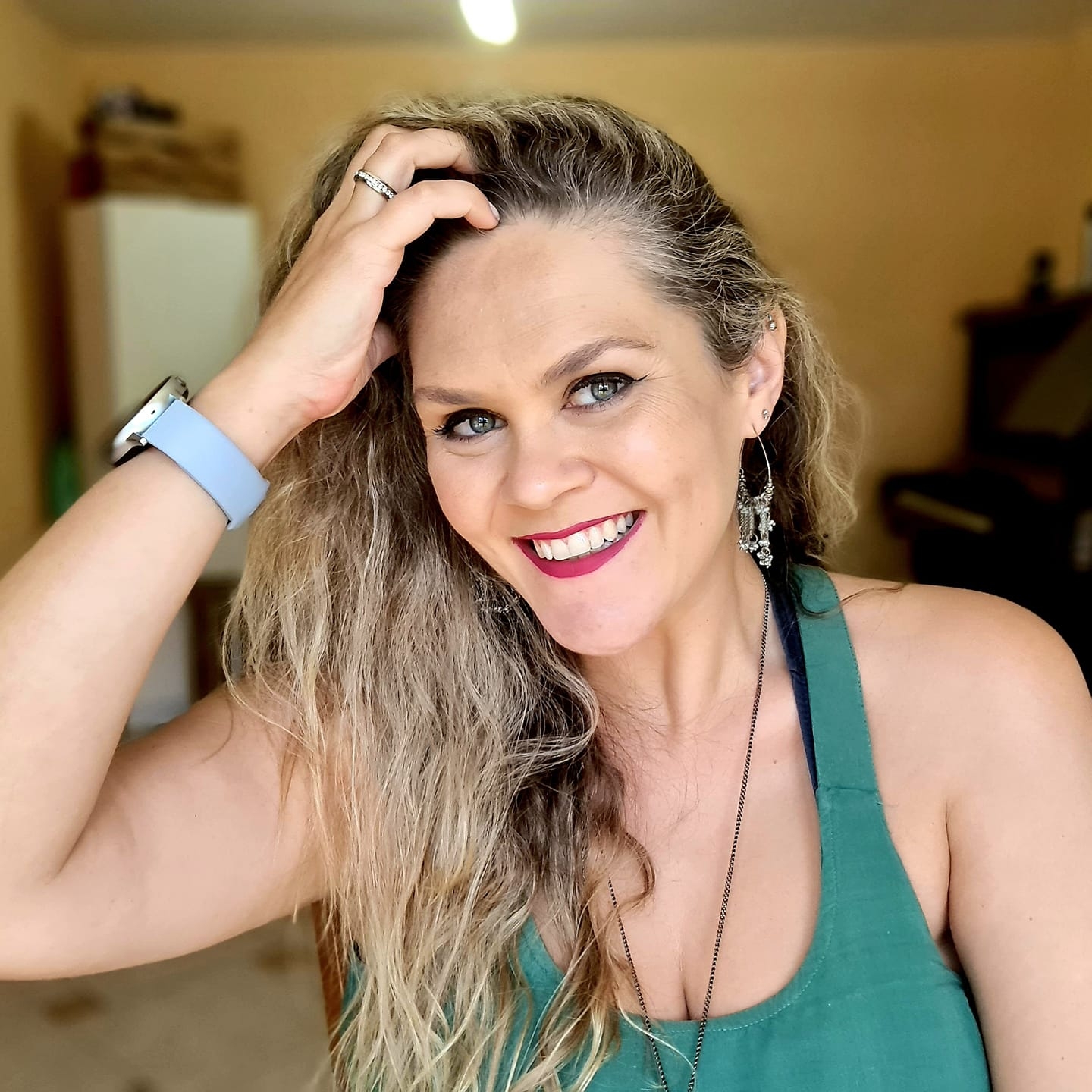 It seems that lately a lot of very good female fronted metal bands from Brazil come out in the open. We had posts about Aventh, Aethera, Dark Valley, EvenDusk, Lasting Maze and Santo Graal. And now, out of the blue, comes NO ONE SPOKE. How big is the female fronted metal scene in Brazil?

I’m working with metal bands since the late nineties, I first joined M-26, a dark metal band from Pelotas/RS, extreme south of Brazil, and there I played with Vetitum too. So, it’s been a while that I follow the Brazilian female fronted metal scene and I can proudly say that the scene has grown a lot! It’s amazing to see how much women are in the festivals, as audience and on the stage too… I think that we are earning space and that’s fantastic…That thought was in my mind when I startet to idealize the script for “Milonga para las Reinas“.

It all started for NO ONE SPOKE in July 2020 with the single “Sigh”, with a notable role for piano and violin. But when you start to sing, everything seems to vanish into nothingness. Where did you learn to sing like that, Carla?

I started to do vocal lessons in 2000, when the guys of M-26 first invited me to do some vocals on a demo. At the time, my first teacher has encouraged me to make the test for the university and I decided to try. I entered there in 2001 and in 2006 I finally graduated! Since that, I’ve had a career as a professional opera singer. I had the opportunity to sing on some important stages, record a CD with opera arias from a Brazilian composer, Carlos Gomes, and I won some contests… It’s been an incredible musical journey so far… 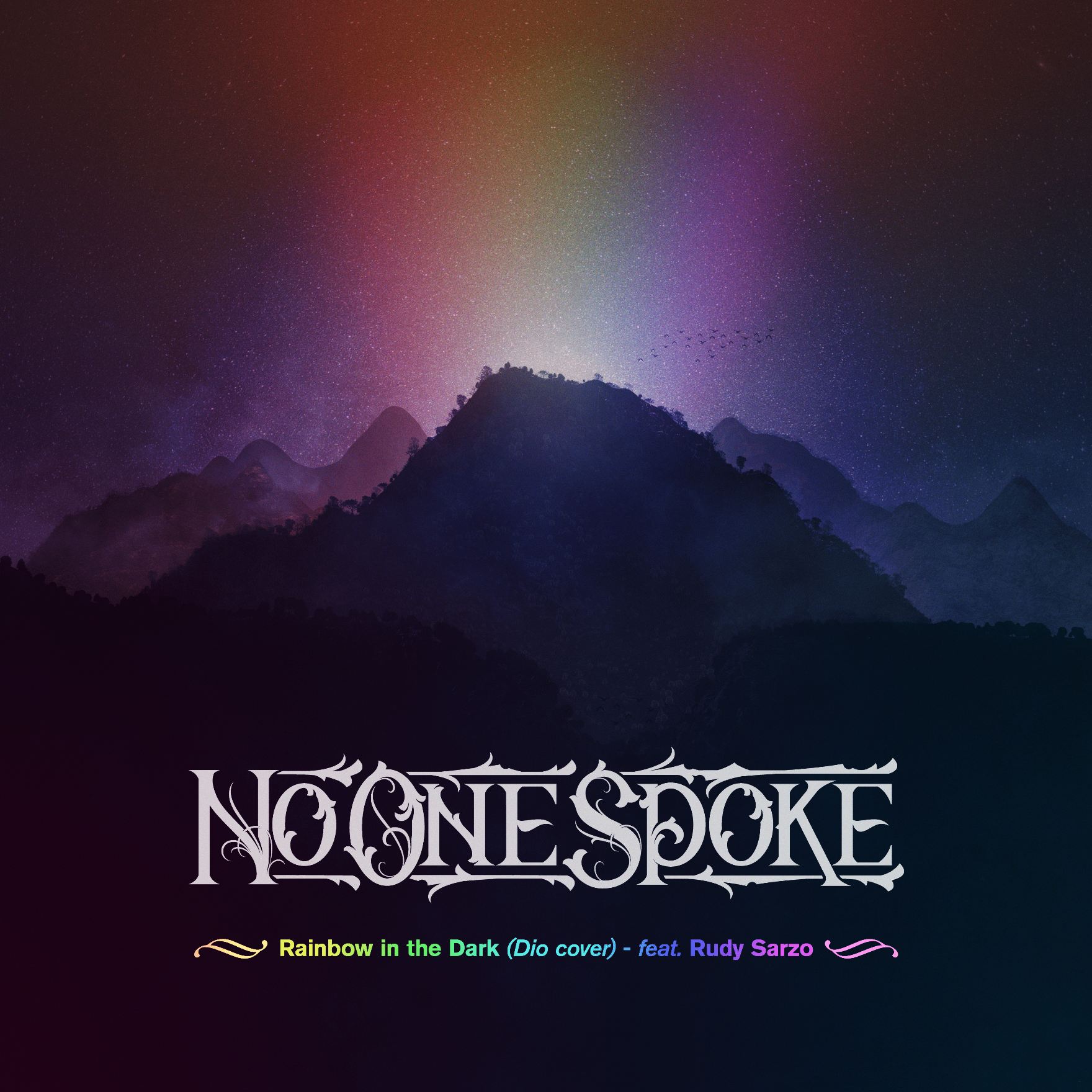 After the single “Milonga para las Reinas” (July, 2020), you end that year with a remarkable single in December, the Dio cover “Rainbow In The Dark” with Rudy Sarzo on bass. How did you make that happen and who came with that idea?

We started the pre-production of “Nine Mirrors” and in the first conversation with the producer Renato Pimentel, we told him that we wanted to record some acoustic versions of “Milonga“, “Sigh” and “Trust Yourself“, but he came with the idea of recording a cover, a song that could possibly put our music in a different place, inside the rock style, but out of the symphonic metal genre. And my first idea was “Rainbow In The Dark“. I’m the singer of a project here called Rock’n Camerata, a 10 years project that mixes classic music and rock, and I always wanted to do this song with them, but it never happened. So I saw in Renato‘s suggestion the perfect time to make this turn into a reality. Until the day that I recorded the vocals, we didn’t have the complete version created, it was totally a studio process and the idea of inviting Mr. Sarzo to record with us emerged at the studio too, another Renato suggestion. We are so much greatful to him, for his kindness, it was really a dream… Mr. Sarzo is a incredible human being!

In January 2021, NO ONE SPOKE revealed the details of their upcoming debut album “Nine Mirrors”. What’s the symbolism in the title and that of the cover art? 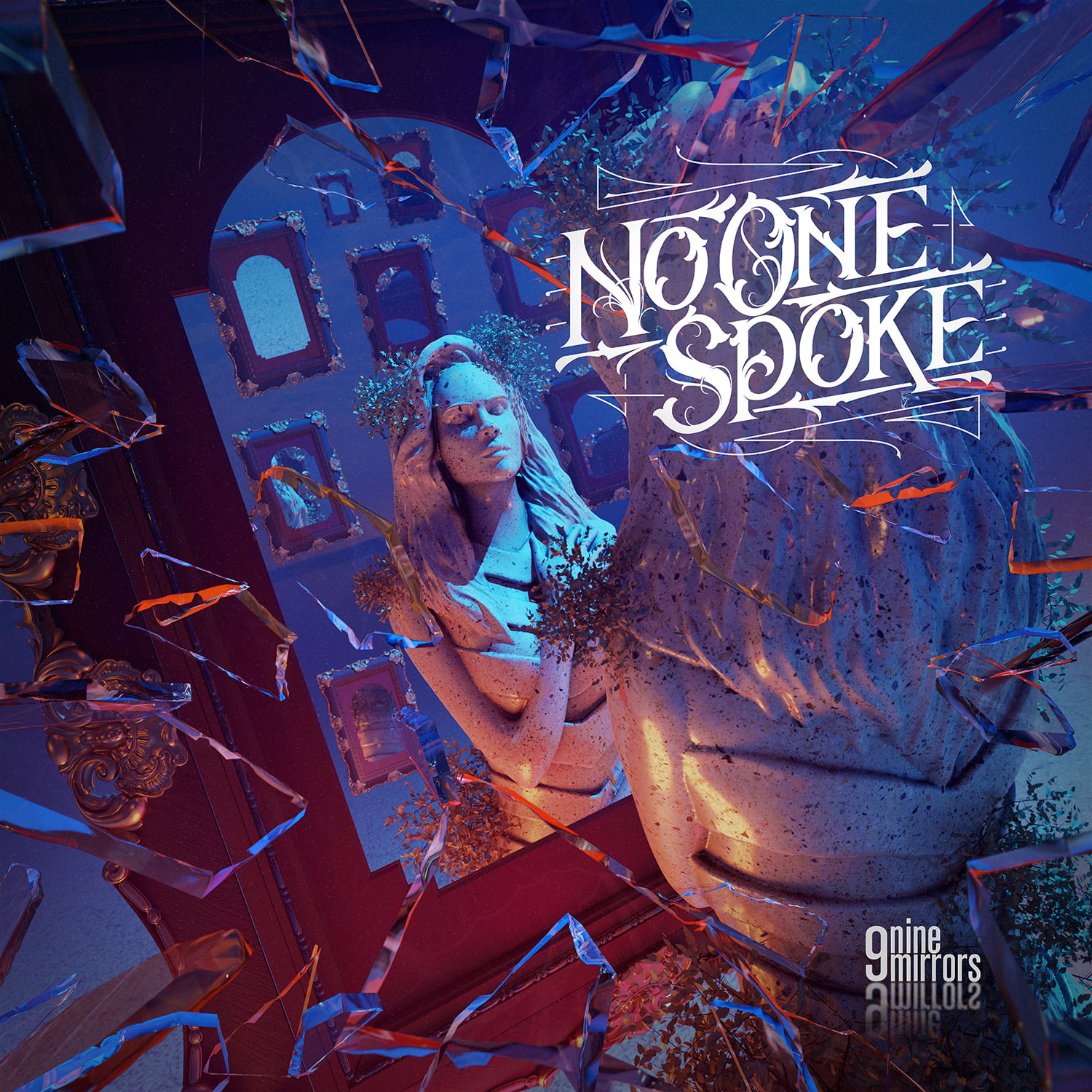 The album has nine songs and in a certain way each one of them is a reflection of the members of NO ONE SPOKE. All of us have participated in the creation process and we certainly put on it a little bit of our dreams, our sadnesses, our frustrations and expectations. What you hear and see in “Nine Mirrors” are parts of our essences and that was the idea I tried to pass to Daniel Meurer, the art cover creator.

In between, you also participated on the “Starway To Brazil – The Brazilian Tribute To Led Zeppelin” with the song “For Your Life” from Led Zeppelin’s much acclaimed album “Presence”. Honestly, wouldn’t you rather have done their biggest hit “Stairway To Heaven” instead? As musically and vocal-wise, this song suits much better for you with the use of piano and violin.

To be sincere, when the invitation came to us, there were no more options left. So we started to listen and discuss about the possibilities and we saw in “For Your Life” the chance to do something different. We are working on the arrangements and we think it will be great!

And then finally the day came, March 26th, that “Nine Mirrors” was released. How did you experience that day? Did you guys do anything special?

We were VERY anxious… we worked SO hard to realize this album… Since we started the crowdfunding campaign we didn’t stop, so we were really curious to know how people would receive our music. And we are very happy since then, with all the feedback that we are receiving… amazing!!! If it wasn’t for the pandemic situation, we certainly would have made a dinner with a lot of food and beer… 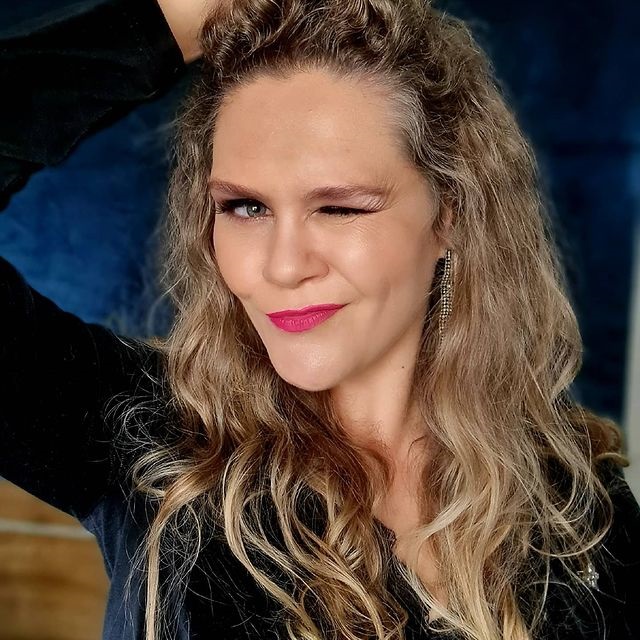 While listening to “Nine Mirrors”, it is just incredible to hear your voice in combination with all the other instruments: piano, violin, guitar, bass, drums… But, there are also many vocal layers on almost every song, where you sing both clean and operatic. Why did you do that?

I try to feel what the music is saying to me and it’s not always that the vocals seem to fit me in a specific song. I like to experiment different vocals and sounds, so I try to explore more how the lyrics are communicating through different ways of singing. My experience with Rock’n Camerata helped me a lot in this matter, because when I started doing these concerts, I immediately realized that I couldn’t sing Rush in a operatic way, for example… so I tried to figurate out how to sing other repertoires exploring my voice in other ways to reach the better interpretation for each song.

Your operatic vocal techniques are extraordinary, something you show best on “Final Breath”. The first thing that comes to my mind, when comparing your voice to other female metal vocalists, is a mix between Nightwish’s Floor Jansen en Souls Of Diotima’s Claudia Barsi. But who is your biggest influence in the metal world and outside that?

I have been greatly influenced by Floor Jansen yes!!! Since I’ve heard her with After Forever I became a fan of her voice and her performance. But I must confess that my biggest influence is Anneke van Giersbergen. I love her voice, her manner of dealing with words. I learned a lot listening to her. Cristina Scabbia also is a great influence. Beyond the metal world, Edita Gruberova, Natalie Dessay, Kiri Te Kanawa, Diana Damrau and Lisette Oropesa are the great divas to me. And Maria Callas, of course… 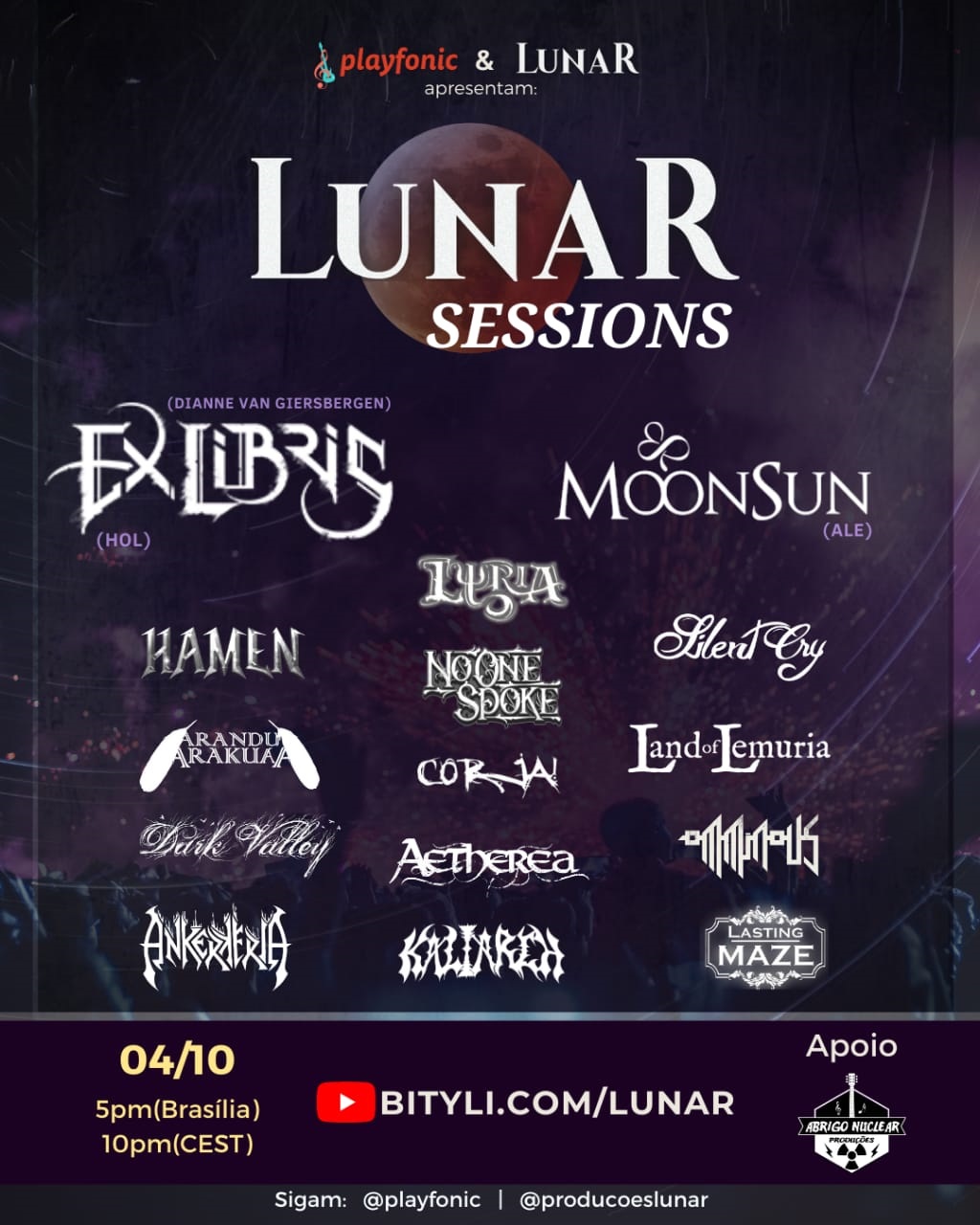 The album closes with the aforementioned Dio cover “Rainbow In The Dark”. So here’s your chance to confess: who’s the biggest Dio fan in the band… you?

Difficult question… I love Dio‘s voice and feeling, he’s a legend and I feel really comfortable singing his songs. I think our drummer Gabriel is the other one who is a big Dio fan too.

One more return to the past… on October 4th 2020, NO ONE SPOKE took part of the Lunar Sessions, an online festival with Brazilian bands like the aforementioned Lasting Maze, Aethera and Lyria, but also Moonsun from Germany and ExLibris with Dianne van Giersbergen from Holland. Is that something you would consider to do again on a smaller scale to promote “Nine Mirrors”?

Yes, absolutely! We are working now on the Led Zeppelin version and we should film a videoclip for “Fear Of Regret” pretty soon, after that we definitely prepare some material for this kind of festivals… European invitations are most welcome, by the way! Stay tuned on our social medias!

REVIEWS:
ETERNAL CLOSURE – At The Center Of It All – Chapter I
DEFACING GOD – The Resurrection Of Lilith
SYRYN – Heads Or Tails
SPLINTERED THRONE – The Greater Good Of Man
EMPRESS – Fateweaver